The extraordinary story of the ‘founding mothers’ of NPR

2021 marks the 50th anniversary of NPR’s first transmission, and there could not be a more ideal time to celebrate the women whose voices defined public radio and paved the way for female journalists.
BYLisa Napoli
April 13, 2021, 6:00 PM UTC 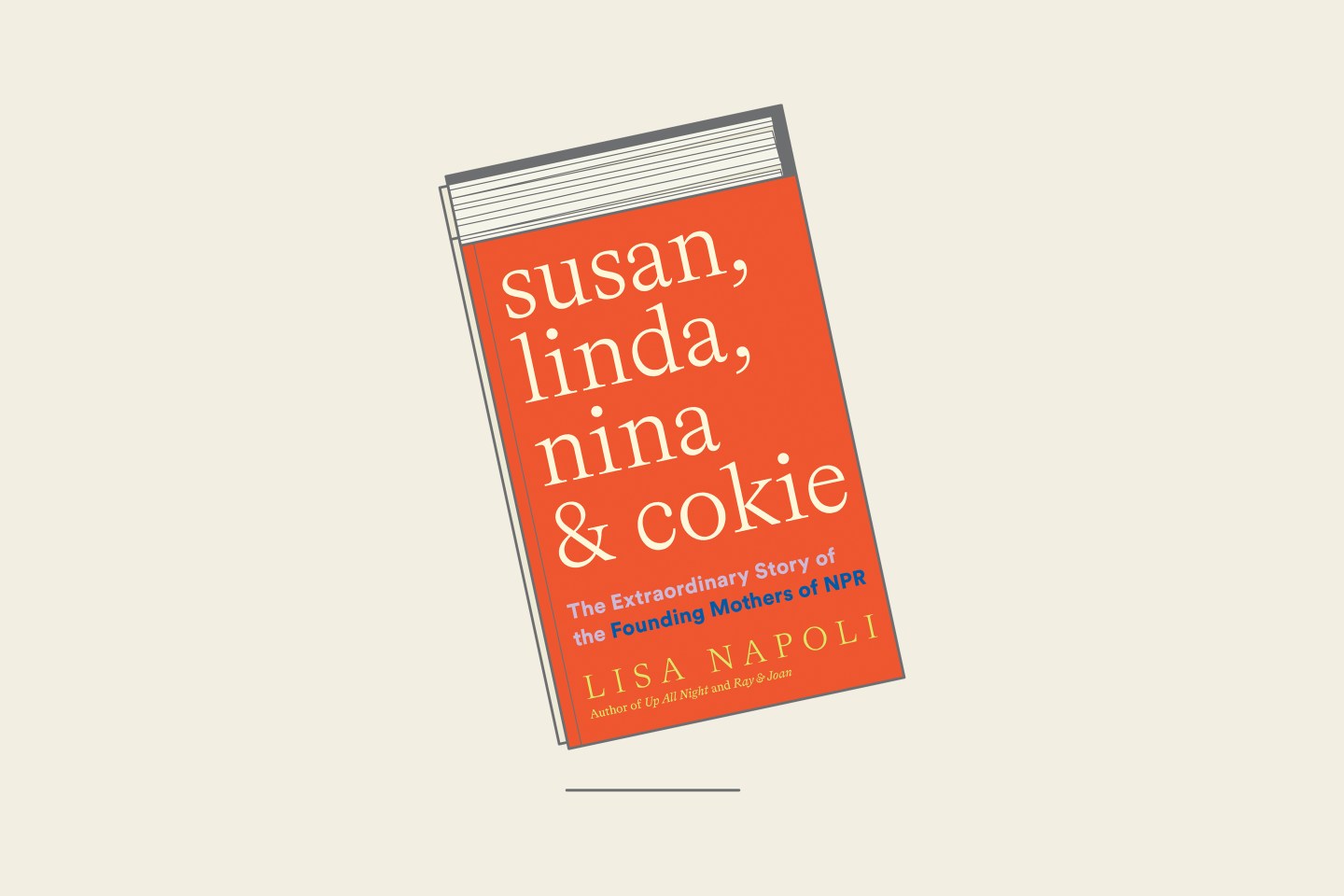 “Susan, Linda, Nina & Cokie: The Extraordinary Story of the Founding Mothers of NPR” by Lisa Napoli
Courtesy of Abrams Press

From the launch of its first news program, All Things Considered, in 1971, NPR slowly and steadily gained listenership—especially when the show’s producer deigned to name Susan Stamberg as coanchor. This made her the first woman to host a nightly network newscast, and she quickly developed a following of devoted listeners.

The stealth reporting of Linda Wertheimer, Nina Totenberg, and Cokie Roberts helped elevate the network to greater acclaim—and simultaneously showed broadcasting executives and listeners alike that women could, indeed, deliver hard news with authority. The belief that they “couldn’t” (and that audiences wouldn’t listen) had long kept women off the air as broadcasters.

By 1991, the women had firmly established NPR as a trusted source of news.

And then, as shown in this excerpt from my new book, Susan, Linda, Nina & Cokie: The Extraordinary Story of the Founding Mothers of NPR, Nina broke a story that elevated her to the ranks of breakout star.

Lisa Napoli is an author and journalist who has worked for the New York Times, Marketplace, MSNBC, and NPR member station KCRW, in Southern California.
Courtesy of Abrams Press

A report on workplace injustice was about to elevate another of the founding mothers to a household name. Whispered allegations around Capitol Hill in the summer of 1991 piqued Nina’s curiosity about Supreme Court nominee Clarence Thomas, onetime chief of the Equal Employment Opportunity Commission, which had been established as a result of the historic 1964 Civil Rights Act.

Nina had already altered the course of history a few years before by revealing information about an earlier Supreme Court nominee, Douglas Ginsburg, that a background check had not: While working as a professor at Harvard Law School, he had smoked pot, a revelation that unleashed a frenzy of admissions by other public officials who said that in the past they had toked, too, and denouncements from others who said it was no one’s else’s business but their own. The very day after that piece ran, she returned to the airwaves to reveal another incendiary bit: that Ginsburg had inflated his résumé, overstating his trial experience. (Vanity Fair reported several years later that a Legal Times reporter was said to have given Nina this story in exchange for attribution he didn’t get. Nina, for her part, said she’d learned the information on her own.)

Two days later, after innumerable mocking jabs in the press about the “High Court,” Ginsburg withdrew his name from consideration. To the critics who accused her of digging up information they considered private, Nina responded (after admitting to having once taken a puff herself long ago) that the use of an illegal substance by a potential Supreme Court justice was not simply a case of youthful experimentation. It was essential information that the government and the public deserved to know. “Doug Ginsburg…was breaking the law while he was teaching it,” she said. “Where are you going to draw the line?…If someone’s a wife beater, a shoplifter, an embezzler or misused his brother’s estate…you’re going to find somebody who will think that it is private information and others who will not.”

The Ginsburg story turned out to be training wheels for the conflagration unleashed surrounding Clarence Thomas’s nomination. During the routine background check, a former employee named Anita Hill had accused him of ongoing and graphic sexual harassment. Like Thomas, Hill was a Black, Yale-educated lawyer who’d bootstrapped her way out of poverty. Now a professor of law in Oklahoma, she’d informed the Senate Judiciary Committee that when she’d worked for Thomas at the EEOC, he’d subjected her to an onslaught of graphic talk about sex, including details of pornographic films he enjoyed watching and his supposed prowess in the bedroom.

Behind closed doors, the committee, led by Senator Joe Biden, dispatched the FBI to investigate Hill’s charges, receiving a sworn affidavit from her, then dismissing the allegations for lack of evidence. Thomas’s nomination proceeded. Somewhere along the way, a latter-day Deep Throat leaked the incendiary allegations.

Two days before a full vote in the Senate, reporter Timothy Phelps of Newsday broke the news about the nation’s next Supreme Court justice in print. “While Thomas implicitly pressured Hill to have sex with him,” Phelps wrote, his source said “he never told her explicitly that she would lose her job if she did not consent.” Nor had she reported the harassment at the time. (What was she going to do? File a complaint with the EEOC?)

Nina had been hustling to get the story, too. Her curiosity had been piqued when she’d heard Senator Biden make a defensive remark about the nominee’s character. A few hours after Phelps’s story landed in newspapers across the nation, Nina’s piece aired on NPR, including an added element: the voice of the accuser.

Hill told Nina she’d grant an interview if the reporter managed to get her hands on the confidential affidavit. This was a challenge she didn’t have to hear twice. Daring Nina to sleuth out an elusive document she wasn’t supposed to have was like “waving a red flag at a bull,” she said. Time and time again, Nina enjoyed living up to that accusation by J. Edgar Hoover that she was a “persistent bitch” (or, at least, the persistent part).

On tape, the aggrieved lawyer explained in a voice just above a whisper, “Here is a person who is in charge of protecting rights of women and other groups in the workplace, and he is using his position of power for personal gain…And he did it in a very—just ugly and intimidating way. But he is also really, in spirit and I believe in—in action, too, violating the laws that he’s there to enforce.”

The firestorm that Nina had anticipated after her report flamed far larger than either woman had imagined. Switchboards lit up at the White House and the Capitol, “telephone gridlock” caused by an army of outraged women who also jammed the lines with faxes, furious that Hill’s charges hadn’t been fully investigated. In a dramatic display, seven female members of the House marched over to the Senate, demanding a delay in the vote as well as a hearing—which Nina wound up cohosting on PBS.

The resulting three days of testimony created what one wag called “the most riveting television drama since the infamous plotline of the nighttime TV soap opera, Dallas, ‘Who Shot J.R.?’” (Though, of course, that drama was fiction.) The hearings even trumped the World Series playoffs between the Toronto Blue Jays and the Minnesota Twins; more viewers tuned in to hear the Supreme Court nominee defiantly deny the allegations and insist that this was a “high-tech lynching for uppity blacks.” Hill faced a firing squad of white male senators with unflappable grace, her voice never wavering as they peppered her with incendiary questions as if she herself were on trial. Are you a scorned woman? Do you have a martyr complex? What was the most embarrassing of incidences?

“It was as if a river of raw sewage had suddenly been unleashed in the marble chamber, words forbidden in polite company and on the airwaves; X-rated phrases; vivid graphic references to large breasts and big penises and sex with animals.”

This river of sewage seeped out of the chamber and blanketed the culture. The American people chose sides as they publicly confronted the long-simmering scourge of workplace sexual harassment. The blockbuster movie 9 to 5, starring Jane Fonda, Lily Tomlin, and Dolly Parton, had brought the issue into the zeitgeist in 1980, but its depiction of boorish and abusive office behavior hadn’t incited a fraction of what Hill’s revelations had. Her treatment by the senators escalated the outrage.