Why accountability matters now more than ever in business 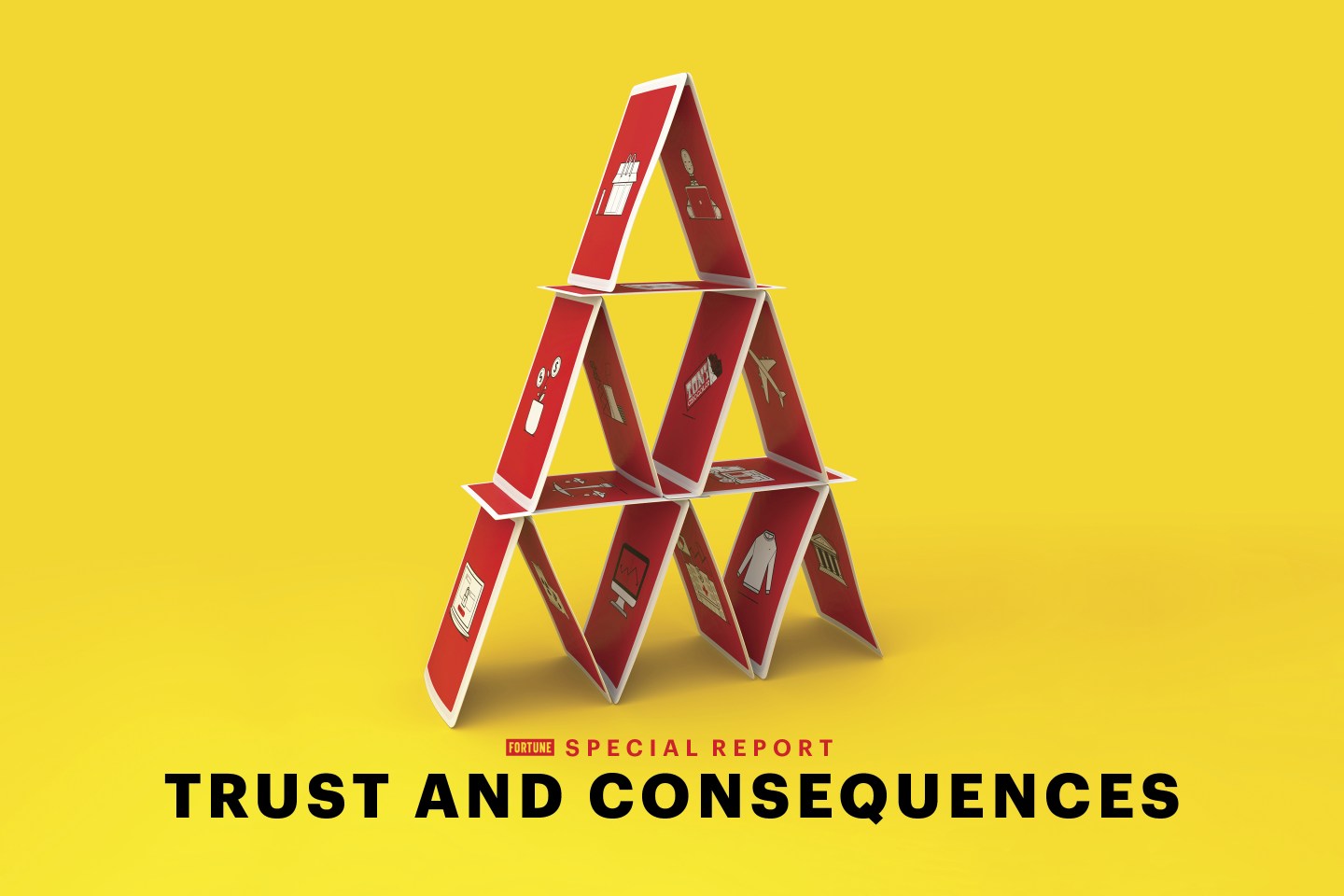 In Fortune‘s April/May 2021 issue, we focus on the theme of “Trust and Consequences.” The issue’s unifying idea, writes Editor-in-Chief Clifton Leaf, is that “as far as society is concerned…how a company behaves in the world is now as important as what it sells or produces.” You can find the stories that make up this special project—including features on CEO turnover and culture shock at McDonald’s, Dominion Voting’s lawsuit against Fox News, the botched COVID-19 vaccine rollout in Pennsylvania, and many more—at this landing page.

A few weeks into year two of the lockdown era, America is grappling with what an ethicist might call the Delivery Dilemma.

When white-collar knowledge workers fled from the pandemic to toil from home, and shopping and dining out became potentially mortal hazards, business’s response showed just how versatile and nimble it could be. Huge swaths of the economy pivoted to or doubled down on e-commerce. Sit-down restaurants converted to takeout. Big-box retailers hired hundreds of thousands of shelf-pickers and box-fillers. Factories worldwide scrambled to add shifts to make the exercise bikes, jigsaw puzzles, and pet toys that we suddenly realized we needed so much more of. A global steel-and-sinew web of logistics infrastructure, overseen by ultraefficient algorithms, delivered whatever we wanted, cushioning the blow of a planetwide crisis.

The creators and owners of that web reaped rich rewards. Shares in FedEx and Target have more than doubled over the past 12 months. Food-schlepping startup DoorDash went public in December and hit valuations as high as $70 billion. Between March and August of 2020, Amazon’s stock rose by 90% (though, after a rocky spring for tech stocks, founder and CEO Jeff Bezos is now worth only $177 billion).

But the people who actually got the goods to our doorsteps haven’t fared as well. Many delivery drivers are gig-economy workers or sub-sub-subcontractors, earning modest pay with no benefits. Warehouse and assembly-line jobs pay better than minimum wage, but seldom a living wage—sometimes earned under harsh conditions where every bathroom break is timed to the minute. And all along the supply chain, workers either labor in close quarters with one another or encounter hundreds of strangers-slash-customers a day, with each interaction representing another potential exposure to COVID.

John Paul Rollert, a professor who teaches business ethics at the University of Chicago Booth School of Business, watched the Delivery Dilemma play out from his virtual classroom, where his MBA students recoiled at the K-shaped divergence of the shareholders’ fortunes and the precarious incomes of the shelf-pickers and van drivers. And while many of them aspire to be (or at least work for) the next Bezos, the disparity shook them. “The engine of the economy is humming fine, but the sound of the engine is disconcerting,” Rollert says. “It’s not that the system doesn’t work, it’s that the system isn’t fair.”

In a capitalist economy, we accept and even encourage disparity of wealth; it’s inextricable from a system that rewards innovation, industriousness, and competitive drive. But when, say, the gulf between the CEO and the delivery driver grows too wide, collective trust erodes. And if that happens, business can suffer the consequences.

Part of our job at Fortune is to analyze and diagnose such mechanical problems and to point out needed repairs. So think of the stories in this special issue—our first to focus almost exclusively on the theme of “accountability”—as a visit to the garage. Across the business world right now, the “check engine” light is definitely on. But is it just a faulty gas cap or are we about to blow a gasket? Let’s put the truck up on the rack and take a look.

Many of the stories in this package explore examples of business getting out of balance—and the complicated questions those situations raise about the way ahead. How do we fix a health care system that has become dominated by perverse incentives? What happens when a company’s actions don’t match its rhetoric? And who bears responsibility when a media company gives oxygen to falsehoods in socially destructive ways? The Delivery Dilemma, of course, poses its own questions about balance, as the race to satisfy consumer desires traps many workers in an e-commerce underclass.

Business has an unparalleled power to create wealth and solve problems. At this pandemic-scarred moment, when so many people are economically vulnerable, business leaders should let accountability light the way to more equitable results, and make every stakeholder feel like they have a say in where we’re headed.

Corporate soul-searching is all the more urgent right now because, by some measures, business has become the most trustworthy pillar of a wobbly society. Individual companies stepped up to raise pay and shield employees from layoffs in the pandemic; others shifted investment capital to Black communities and meaningfully embraced racial equity after George Floyd’s killing. Drugmakers delivered on their promise to develop COVID-19 vaccines, in record time. And the private sector collectively stood up for the constitutional order when a sitting President threatened it. Not coincidentally, the Edelman Trust Barometer, a widely watched survey of public attitudes toward institutions, showed global trust in business in 2020 at highs it hadn’t reached in more than a decade, with a widening lead over government, media, and NGOs.

That greater trust in business holds true even for many people born after 1980—generations scarred by the debacle of the financial crisis. “Gen Y doesn’t see government as particularly effective at solving social problems,” says Christina Hachikian, a strategic management professor at Chicago’s Booth School and the executive director, from 2012 to 2020, of its Rustandy Center for Social Sector Innovation. “They have a greater interest in using business and the market.”

To be sure, younger workers haven’t drunk the corporate Kool-Aid; many remain deeply mistrustful of business’s motives. (That’s not just generational: Most people are more likely to trust their own employers than to trust the business community in general.) But younger workers have also dramatically reshaped the expectations that corporate leaders face. Richard Edelman, CEO of the communications firm behind the barometer, runs down a list of areas where millennial employees now routinely urge their companies’ chief executives to act: Gender and racial equity. Greener supply chains. Retraining and upskilling. Above all, younger employees want their leaders to speak out on social problems: “Your own people think you’re complicit in whatever it is you don’t talk about,” he says.

In the current political climate, employees and consumers may be better positioned than government is to hold corporations accountable. In general, the law struggles to keep pace with innovation and technological change: The fact that social media content is governed by the 25-year-old Communications Decency Act—legislation dating from the heyday of the dial-up modem—speaks volumes on that front. And the hair’s-breadth partisan split in Congress makes major business reform unlikely in the near term.

In the absence of highly capable government, can business be trusted to police itself? Within certain limits that’s a desirable outcome, says Kwame Anthony Appiah, professor of philosophy and law at New York University who pulls double duty as the New York Times’ “Ethicist” columnist. “It’s reasonable of CEOs and boards to say, ‘Because we are the experts on what we are doing, we’re always going to know more about the risks we pose than anybody else.’ ” Peer pressure among business leaders, he adds, can be a powerful normative force.

But self-policing, of course, is the ultimate balancing act—which means it can only truly work when a business takes other stakeholders into account. Go it alone, and you’re far more likely to go wrong. The companies that emerge strongest from today’s tumult will do so because they made room at the decision-making table for their headquarters-city mayors as well as their hedge fund shareholders; for inclusion activists and environmental idealists as well as sharp-edged strategists; and, yes, for delivery drivers as well as corporate directors. If all those parties raise the bar for one another and for leaders, the resulting accountability could keep the engine of business in tune.

Correction, April 17, 2020: An earlier version of this story incorrectly identified Richard Edelman as the founder of communications firm Edelman; he is the CEO.

This article appears in the April/May issue of Fortune with the headline, “Moment of truth: Why accountability matters more than ever.”