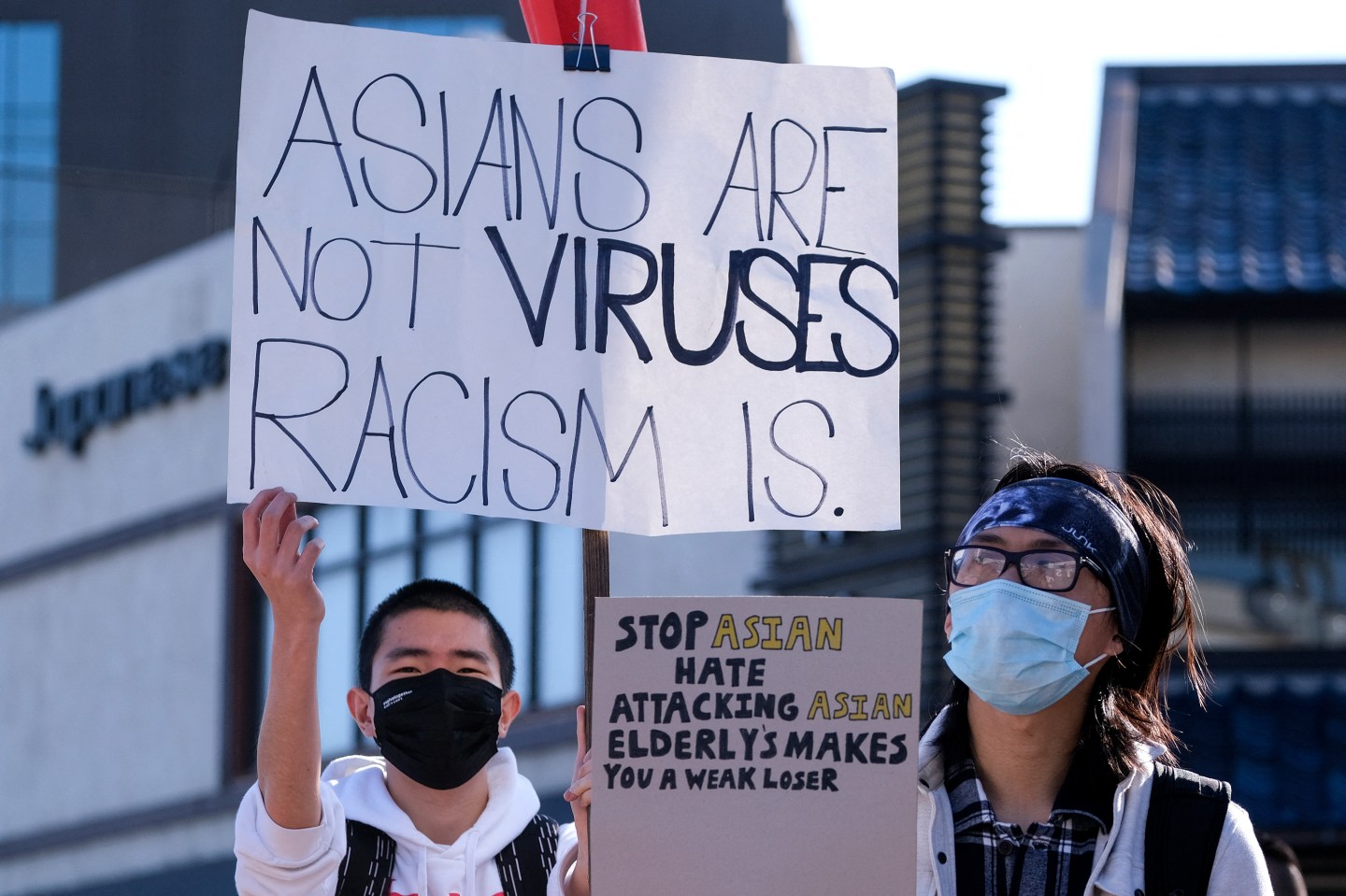 Business leaders are speaking out about anti-Asian racism in the wake of the Atlanta shootings.
RINGO CHIU—AFP/Getty Images

– Stop the hate. The recent murder of eight people in Georgia—six of them women of Asian descent—has horrified and frightened us all. But it has been particularly painful for the Asian American and Pacific Islander community, which is already grappling with the alarming rise in hate crimes against them.

The incident was traumatizing to people of Asian descent for yet another reason: Many felt that the media did not adequately call out the role that race played in this attack, at least not initially. This gap in the reporting about these murders has caused Asian American business leaders to speak out, pushing the uncomfortable and complicated issues that must be a part of these discussions to the forefront.

“These are complex issues to cover, but I hope that instead of taking a simplifying view of ‘gender or race,’ the media will recognize that it is possible for someone to have biases against both gender and race,” says Sarah Guo, a venture capitalist at Silicon Valley investment firm Greylock. “Recognizing intersectionality and the impact of this tragedy on the Asian community, instead of simply parroting the murderer’s claimed lack of racist motivation, would better shape our conversations.”

I reached out to Guo, and a handful of other Asian American female leaders we’ve written about here in the Broadsheet in the past, to hear more about how all of us can push for tough but necessary conversations. (The majority of recent attacks on Asian Americans—at least those that are being reported—are targeted at women.) The female leaders I spoke with had a lot to say.

Clara Shih, CEO of the service cloud business at Salesforce, based in San Francisco, provided a to-do list for those of us in the media, aimed at more accurately and productively reporting on attacks like the one we saw last week.

“First, learn about the victims of these attacks,” says Shih. “The stories we tell should focus on humanizing the victims, not the attacker. Say their names and share their stories.” (Here are the names of the victims: Xiaojie Tan, Daoyou Feng, Soon Chung Park, Hyun Jung Grant, Suncha Kim, Yong Ae Yue, Delaina Ashley Yaun, and Paul Andre Michels. And here is a helpful pronunciation guide put together by the Asian American Journalists Association.)

Anne Chow, CEO of AT&T Business, which is headquartered in Dallas, emphasized the importance of providing both clarity and context in coverage: “First of all, media can call it like it is. Systemic racism and social injustices exist. Crimes committed either in part or solely based on a bias against the race, religion, sexual orientation, disability, ethnicity, gender, or gender identity are hate crimes. Additionally, to more amply address the underlying issues which contribute to the loss of human life, dignity, and respect—which thus fuel continued inequalities, discrimination, stereotyping, and prejudice—media must surface these biases transparently and constructively.”

But there are lots of things we all can do, not just those of us in the media, to be better advocates.

“We should all be talking about unconscious bias and call out bad behavior when we hear people saying things that are racist or sexist,” says Shih. “Even if it seems like a harmless joke, stereotypes are more dangerous than they seem and we must call it out. We have now seen how racist language can lead to violence and even death.”

Speaking out, especially on these complex and painful issues, isn’t easy. “I worry constantly about my parents’ safety and call to check on them daily,” says Shih. “I feel great sadness and empathy for my fellow Asian Americans in less tolerant areas of the country who live in fear, and a great sense of responsibility to speak out on their behalf.”

Katrina Lake, CEO of online clothing company Stitch Fix, had this to share: “It’s been a really hard few weeks. Although, to be honest, a lot of these kind of hate crimes against the Asian community have been happening since the beginning of the pandemic. The national fervor around it has definitely been the last few weeks, but I would say, within the community, people have been aware of this since the beginning of the pandemic.”

Lake says the recent attacks have given her a renewed commitment to stand up to aggressions that, in the past, would have been considered “small”—like jokes. The general acceptance of anti-Asian racism, and the avoidance of tough discussions about its root causes and its very destructive effects, is something that kept coming up with all of the female leaders I reached out to.

“I hope this tragedy wakes more people up to the fact that longstanding, casually accepted anti-Asian racism is dangerously serious and intensifying,” says Greylock’s Guo. “The attacks in the [San Francisco] Bay Area on people of Asian descent are a daily drumbeat. Now that the hate has turned into mass murder, we must recognize it and take action against it — in our policy, in our education, in our conversations.”

- Biden/Harris 2024. President Biden held his first news conference with reporters yesterday, and he said that he expects to run for reelection in 2024 with Vice President Kamala Harris as his running mate once again. New York Times

- Getting grilled. During yesterday's Big Tech Congressional hearings. Rep. Anna Eshoo asked Alphabet CEO Sundar Pichai if he was "willing to overhaul YouTube's core recommendation engine," expressing concern about the potential of the platform, which is led by CEO Susan Wojcicki, to drive users toward extreme content. Pichai responded, "If I may explain," to which Eshoo said, "I don't have time for you to explain." Fortune

- Voting under threat. Following 2020's high voter turnout in Georgia, the state's GOP-controlled legislature passed a bill restricting voting access. New measures include empowering state officials to take over local elections boards and making it a crime to offer voters food and water in line; Georgia's governor signed it into law last night. "It will make what we all lived through in 2020, child's play," says Lauren Groh-Wargo, the CEO of Stacey Abrams's organization Fair Fight Action. Abrams called the bill's rush to passage a sign of "cowardice." CNN

- Comedy legend. Actor Jessica Walter died at 80 this week. Her career spanned six decades, from an award-winning turn on Broadway in 1963 to her 1975 Emmy-winning role in Amy Prentiss to her beloved matriarch Lucille Bluth on Arrested Development. Walter's daughter Brooke Bowman, an SVP at Fox Entertainment, confirmed her death. NPR

- USC settlement. The University of Southern California will pay $1.1 billion in total to settle sexual misconduct claims brought by more than 710 women against 30-year school gynecologist George Tyndall; an additional $852 million was announced yesterday following a $215 million settlement last year. The settlement is the largest sexual abuse settlement ever paid by a university. Tyndall has been arrested on various sexual assault charges, and has pleaded not guilty. NBC News

- Vaccine problems. EU leaders are continuing to struggle with Europe's vaccine rollout, which has fallen far behind the United States' and the United Kingdom's. German Chancellor Angela Merkel summed up the problem: "We can see clearly that British facilities are producing for Great Britain. The United States isn’t exporting, and therefore we are dependent upon what can be produced in Europe." AP

- A century later. This week was the 110th anniversary of the Triangle Shirtwaist Factory fire, which killed 146 women workers, many of them teenagers. The disaster galvanized the labor movement, and the achievements that followed this tragedy are still foundational to organized labor today. The 19th*

Chrissy Teigen quits Twitter after years of harassment The Verge

-Actor and activist Jane Fonda, on the April cover of Harper's Bazaar