What job security? Americans are feeling worn down and fearful of layoffs 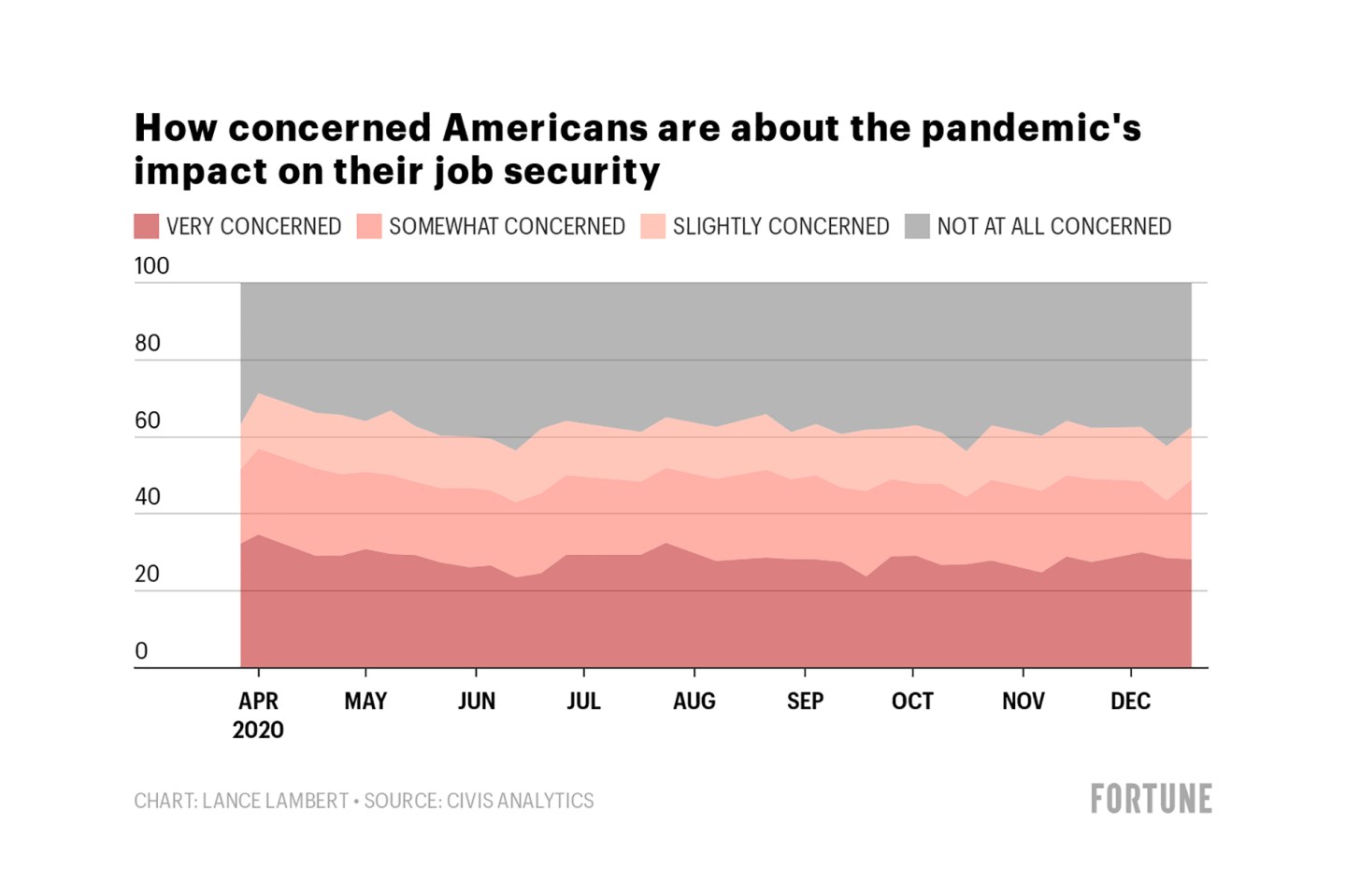 The vaccine rollout and incoming Democratic administration has Wall Street feeling pretty darn optimistic: Goldman Sachs is even going as far to project 2021 GDP growth of over 6%—which, if it occurred, would be the highest growth rate since 1984.

But don’t pencil it in just yet. Look no further than the jobs report on Friday, which found that the nation lost 140,000 jobs in December—our first net job loss since April.

To sustain an economic recovery, it requires more than just a confident Wall Street. Main Street, or American consumers who make up two-thirds of GDP, would also need to feel confident enough to spend on big-ticket items and take risks. To get a pulse on how Americans are feeling, Fortune analyzed data from more 30 surveys conducted since the onset of the crisis by Civis Analytics.

We found that Americans are slightly more optimistic now than last spring, but they’re still down in the dumps. Even as vaccines have begun to roll out, concerns over the virus remain high. In December, 53% of U.S. adults said they’re very concerned about COVID-19. That’s barely down from April 2020—the peak of shutdowns—when 57% shared that sentiment. Among the economic lesson of 2020 is that fearful consumers means less economic activity. Simply put: We can’t fully recover unless the virus and those fears are eased.

When it comes to the workforce, in the months of March and April, the country lost 22.2 million jobs. But as states began to reopen, the country saw 12.5 million jobs return between May and November. However, that initial recovery hasn’t exactly set many minds at ease. In April, 32% of American workers told Civis Analytics they were very concerned about losing their job. In December, that number was 28%.

What does this mean for business? For one, a fearful employee could be less willing to take risks. That might mean passing on work projects that come with big potential for failure. On the flip side, those big bets often turn into big payoffs that move companies bottom lines.

Among U.S. adults, 56% in December say they’re still very concerned about their local economy. That’s despite, on paper at least, this being among the fastest recoveries in U.S. history: The jobless rate (6.7%) only sat above 7% for six months, compared to the 59 months during and following the Great Recession.

If this dark outlook persists, expect to see more Americans putting off big purchases, passing on job-hopping opportunities, and even avoiding that new business venture they’d been considering.

*Methodology: Civis Analytics conducted more than 30 surveys between March 20 and December 18. Each survey received over 1,000 response. The findings have been weighted for age, race, sex, education, and geography.