In corporate America we trust? Despite perennial crisis, business reputations are rising 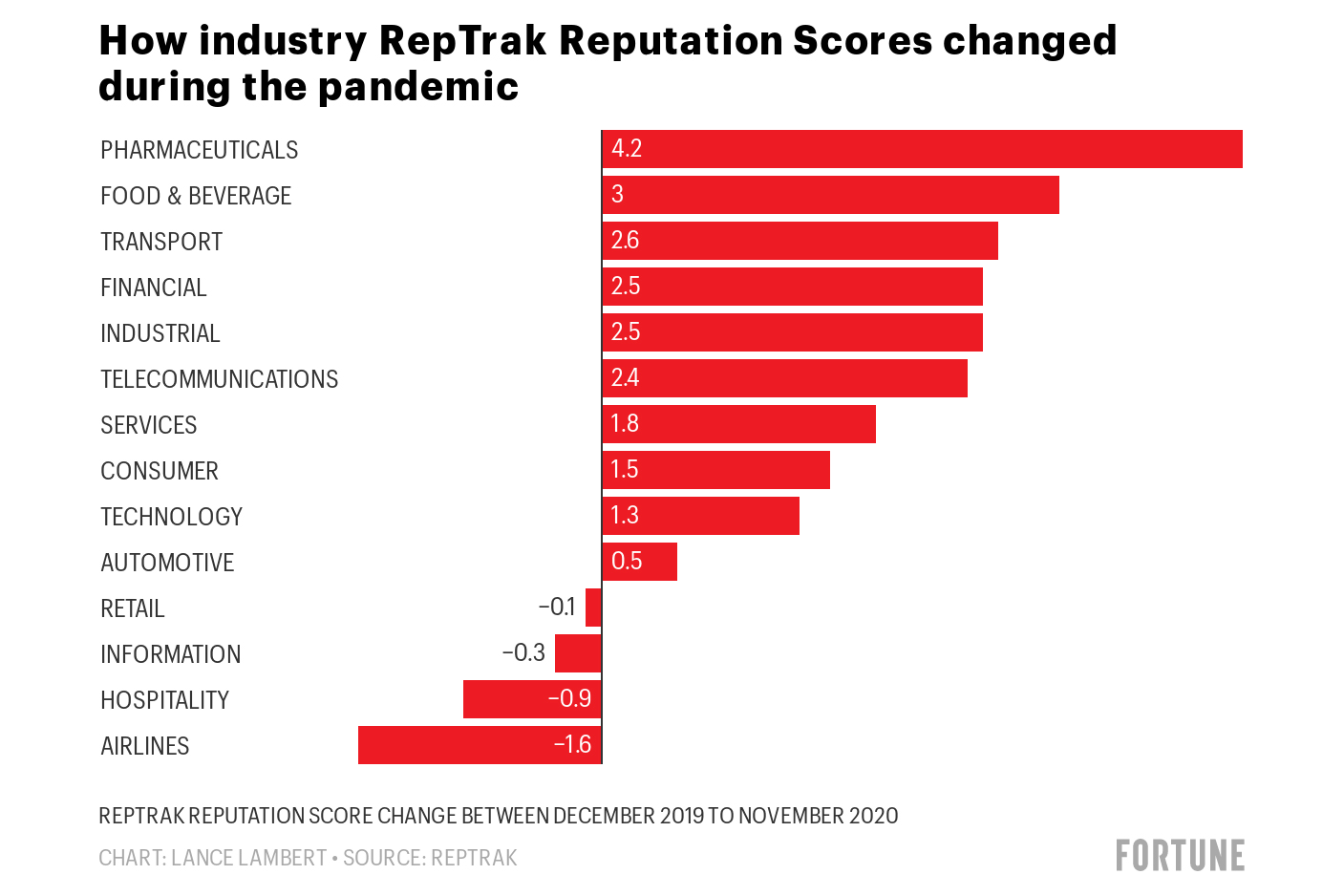 As people question authorities’ response to the pandemic, distrust of governments—in particular, the U.S. federal government—has gone up.

But what about that of corporations? Over the past year, they’ve been called upon to take action towards protecting the health of their employees and customers and addressing structural racial inequalities. Following the events on January 6, they’ve also been tasked to help reduce future violence. Look no further than Airbnb’s decision to cancel all D.C. reservations the week of Joe Biden’s inauguration.

RepTrak—a world leader in corporate brand measurement—provided Fortune Analytics exclusive access to its Reputation Scores of more than 100 businesses.* Historically, when companies see a rise in its RepTrak Reputation Score, that translates to better business outcomes.

The public backlash to the pharmaceutical industry was fierce in recent years due to spiking drug prices as well as Big Pharma’s role in the opioid epidemic. You know things aren’t going well when Martin Shkreli, or “Pharma Bro,” becomes the face of your industry.

That reversed during the pandemic. The pharmaceutical industry saw a +4.2 point upward swing in its RepTrak Reputation Score. The industry came through when the economy and real lives were at stake: As I write this, Americans are receiving COVID-19 vaccines from Moderna and Pfizer.

Of the 14 industries that RepTrak measures, ten saw jumps in Reputation Scores. Some of those are industries that have become more ingrained into our lives, like technology (+1.3) and telecommunications (+2.4). And it appears people are rallying to support food and beverage companies (+3.0), which are currently struggling.

The tech boost is fading.

During this (involuntary) work-from-home experiment, tech companies, like Zoom and Slack, have become more central to our lives. Initially, tech saw a big boost in its RepTrak Reputation Scores. However, as the pandemic lingers, that boost is fading.

Why? My personal guess: We’re simply exhausted and frustrated by the tech-enabled lack of in-person interactions.

Ernest Bramah, an early 20th-century English author, once said, “A reputation for a thousand years may depend upon the conduct of a single moment.”

But for Volkswagen, its comeback story won’t take a millennium. In 2015, Volkswagen was busted for programming its cars to cheat emission standards, which came to be known as “Dieselgate.” However, over the past three years its RepTrak Reputation Score has jumped +3.90. That’s the biggest uptick among companies—suggesting it’s successfully repairing its image.

The second biggest jump went to Netflix (+3.25), which is benefiting greatly from a pandemic that keeps people at home. That uptick in reputation is critical for Netflix as it fights off competition from new streaming services like HBO Max, Disney+, Apple TV+, and NBC’s Peacock.

*Methodology: RepTrak calculates its Reputation Score by collecting data from company stakeholders (e.g. the general public, consumers, investors, employees, and regulators). RepTrak’s score is presented on a scale of 0–100. The company says: “It provides a way for companies to benchmark against their competitors, industry, geographies, and key stakeholders.”