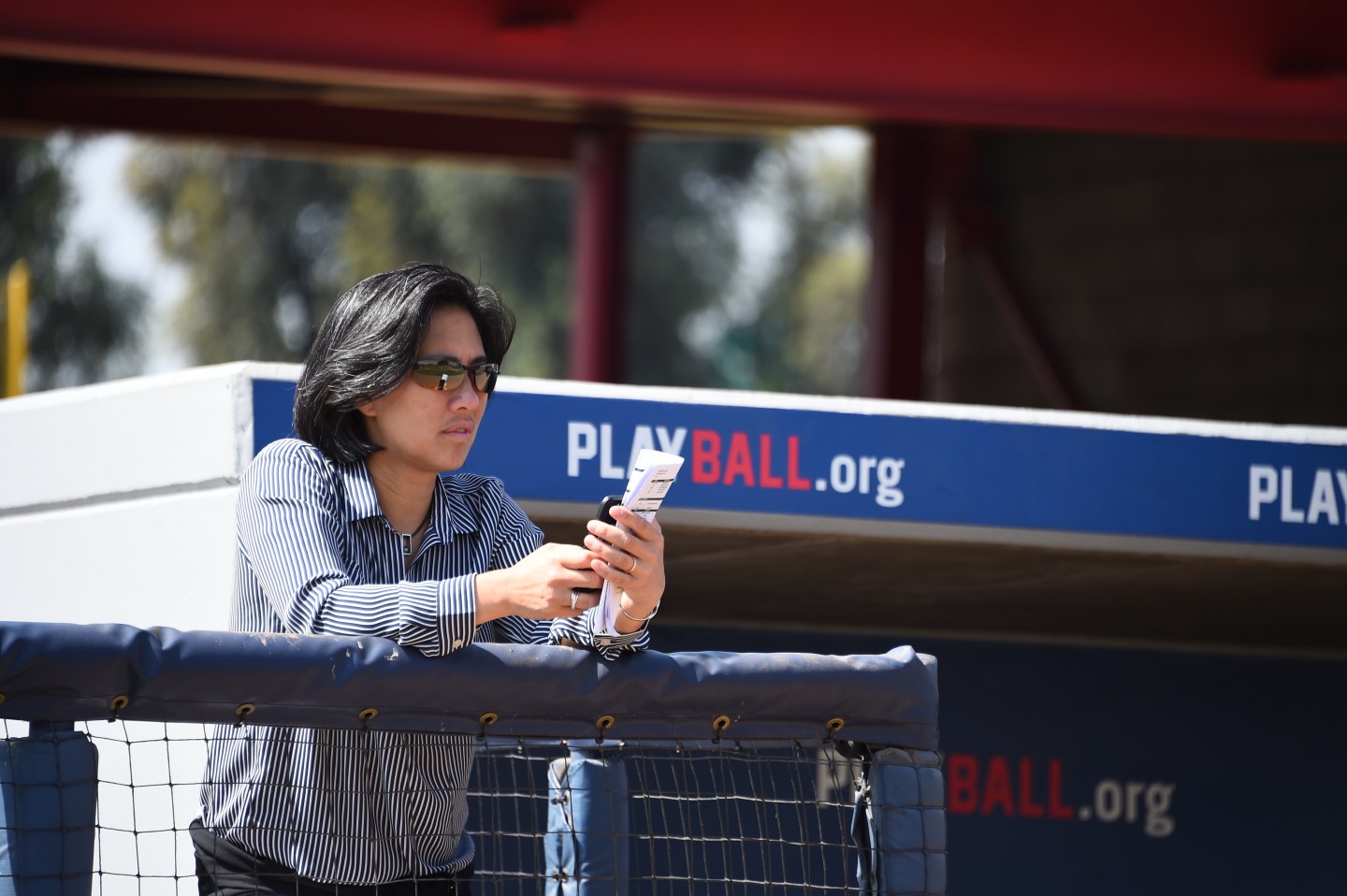 Kim Ng, SVP for Baseball and Softball Development for Major League Baseball looks on during the Breakthrough Series at the Compton Youth Academy on Tuesday, June 19, 2018 in Compton, California.
Juan Ocampo/MLB Photos via Getty Images

Good morning, Broadsheet readers! Gov. Gretchen Whitmer has some advice for how the Biden administration can work with state leaders, three Korean-American women are headed to Congress, and Kim Ng makes history in Major League Baseball. Have a powerful Monday.

– Home run ⚾. If you’re not a baseball fan, you may have missed a milestone piece of news on Friday: the Miami Marlins named Kim Ng their new general manager, making her the first female GM in the Major League Baseball.

By all accounts, it’s an appointment that has been a long time coming. Ng, who began her career in the sport as a Chicago White Sox intern 30 years ago, is the league’s longtime SVP of baseball operations and has three World Series titles and eight playoffs under her belt as an associate GM. She first interviewed for a GM job 15 years ago and has reportedly been a candidate a total of five in the years since. In the words of one ESPN headline, “Kim Ng finally—finally!—lands general manager job in Major League Baseball.”

Ng’s colleagues in the sport are all aware of the history-making nature of her appointment—and how it can change baseball for the better. MLB commissioner Rob Manfred acknowledged that the Marlins news “sets a significant example for the millions of women and girls who love baseball and softball.” Other women in baseball told MLB.com how Ng’s career could affect their own trajectories. “It changes the conversation from, ‘Oh it’s never been done,’ to, ‘Oh, well, Kim’s doing it so you can do it,'” said Rachel Balkovec, the Yankees Minor League hitting coach who was the first woman hired into that role last year.

But one common refrain among those who know Ng is how supremely qualified she is for this job—making her appointment both unprecedented and expected. “We’re not transplanting a kidney here,” said Yankees broadcaster Suzyn Waldman. “You knew that you were looking at a GM. … There’s nothing she doesn’t know about baseball.”

Notably, this isn’t a milestone just for baseball. Ng is the first female GM in any of the four major North American men’s athletic leagues. She’s also the second Asian GM in the MLB. And the Marlins CEO who chose her for the position, by the way, is Derek Jeter. (I’m a Red Sox fan myself, but I have to give credit where credit is due to the former Yankee on this one!)

“When I got into this business, it seemed unlikely a woman would lead a Major League team,” Ng said in her own statement, “but I am dogged in the pursuit of my goals.”

- Country, city, and state. In a Fortune op-ed, Michigan Gov. Gretchen Whitmer and Phoenix Mayor Kate Gallego write about how the incoming Biden administration should work with cities and states. Fortune

- Pentagon pick. One likely pick for President-elect Biden's cabinet is Michelle Flournoy, who would be the first woman to head the Pentagon. Read about Flournoy and the groundbreaking nature of her potential appointment here: Fortune

- Journalist to subject. Two journalists who ruled election coverage get their own NYT profiles. CNN's Abby Phillip and NBC's Savannah Guthrie are the ones in the headlines now.

- Over in the OC. In Orange County, an outstanding Congressional race was decided in favor of GOP candidate Young Kim. Kim will be one of the first Korean-American women to serve in Congress, alongside 2020 victors Marilyn Strickland of Washington state and Michelle Steel, a fellow OC Republican. Associated Press

- Georgia's vote. When Georgia's electors vote for the state's choice in the presidential election, there will be two notable faces among the group of 16. Stacey Abrams, who has received praise for her work turning out Black voters in the state, and incoming Rep. Nikema Williams, who was elected to the late John Lewis's seat, will cast their votes for President-elect Biden. Atlanta Journal-Constitution

- AI-VF. Can artificial intelligence improve IVF? Researchers are examining whether A.I. can "more precisely pick the most viable embryo to implant," which would improve success rates, reduce the risk of pregnancy loss, and lower costs. STAT News

- 'Daughters' rights.' Among the most privileged class in the U.K., a campaign is growing for "daughter's rights"—to receive titles, estates, and money that are still only passed down to sons. There's more at stake, though, than just family wealth; also affected by the rules are the 92 seats in Parliament reserved for hereditary peers, all currently held by men. The Atlantic

"Ultimately that’s what she wanted for her kids—having a better life for them."

-Author and activist Ruby Bridges on her mother, Lucille Bridges, who enrolled her daughter in an all-white elementary school in 1960 and escorted her to her classes. Lucille Bridges died at 86 last week.