‘It has to have an impact’: What Citi’s new CEO means for other women on Wall Street 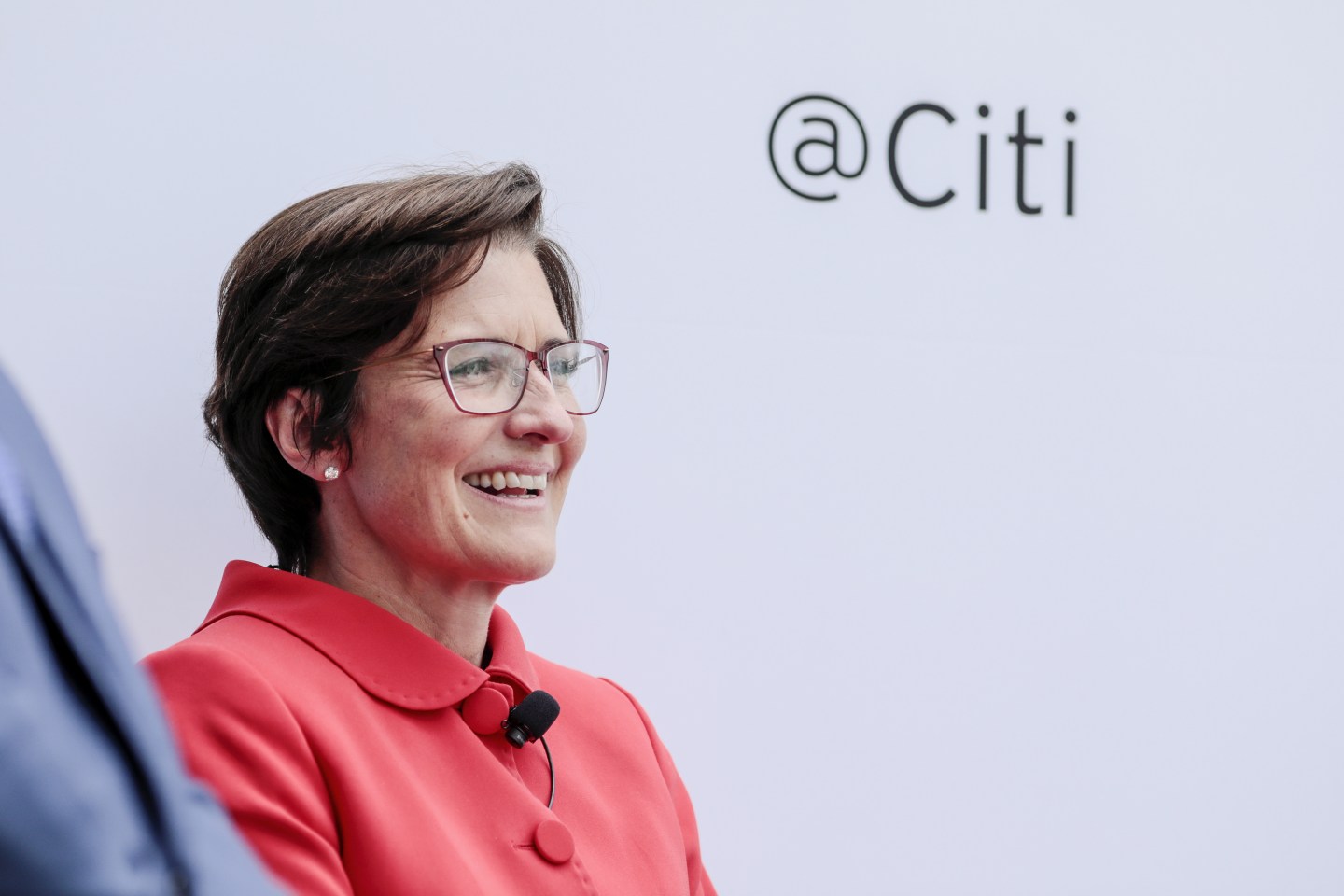 Jane Fraser, chief executive officer for Latin American at Citigroup Inc., smiles during the Milken Institute Global Conference in Beverly Hills, California, U.S., on Monday, April 29, 2019. The conference brings together leaders in business, government, technology, philanthropy, academia, and the media to discuss actionable and collaborative solutions to some of the most important questions of our time. Photographer: Kyle Grillot/Bloomberg via Getty Images
Kyle Grillot—Bloomberg/Getty Images

Congratulations to Jane Fraser on smashing Wall Street’s glass ceiling. So, who’s next?

That quickly became the question after news broke last week that Fraser, Citigroup’s global consumer banking chief, would become the first woman to run a major bank—for the first time in history. The announcement that Fraser would indeed attain the long-elusive corner office of a big Wall Street bank was widely celebrated—and kicked off widespread speculation about the most likely next candidates to follow her lead.

The timing of Fraser’s promotion may have been helped along by federal regulators, who are preparing to reprimand Citigroup over its risk-management systems, the Wall Street Journal reported Tuesday. Retiring CEO Michael Corbat was not asked to step down, but decided to leave sooner than he had initially anticipated, in order to allow Fraser to take over a complex, multiyear overhaul, according to the Journal. (A Citigroup spokesperson said that “it was always Mike’s plan to retire in 2021.”)

Whatever problems she inherits, Fraser’s promotion was a long overdue milestone for the most high-profile women in finance. And she had some strong competition to get there; in the past several years, several of the largest Wall Street banks have positioned other senior women to potentially become their next CEO. At JPMorgan Chase, both Marianne Lake (consumer lending CEO and No. 21 on Fortune’s 2019 list of the Most Powerful Women) and Jennifer Piepszak (chief financial officer and No. 26) are considered contenders to succeed CEO Jamie Dimon. (The bank on Tuesday also promoted consumer banking CEO Thasunda Brown Duckett to its operating committee.) Meanwhile, at Bank of America, chief operations and technology officer Cathy Bessant is also considered a potential successor to CEO Brian Moynihan (and was in the running for Wells Fargo’s CEO job last year).

So will Fraser’s history-making appointment as CEO of the fourth-largest bank ease the way for any of these other women to follow her to the top of their industry?

“I absolutely think this is going to make an impact,” says Lee Hanson, vice chairman of the CEO and board practice at executive-recruiting firm Heidrick & Struggles and a former investment banker at Morgan Stanley and Merrill Lynch.

While Fraser is not the first woman to run one of the country’s top 20 banks—KeyCorp’s Beth Mooney, who retired in May, broke that ceiling—she is the first to run one of Citigroup’s size. Citi, No. 31 on this year’s Fortune 500, had $103 billion in 2019 revenues—more than 13 times those of KeyCorp, No. 411.

That larger scale carries a greater resonance for other women knocking on the CEO door at their companies, including those outside finance, Hanson says. “Particularly for a prominent, huge, global company like Citi, it has to have an impact,” she says. “Any large, global company has to be thinking about this.”

An increasing number of companies are, not just in finance. This week, as Linda Rendle takes over Clorox, there are now 38 female CEOs in the Fortune 500, accounting for 7.6% of the executives heading companies on that elite list—an all-time high. If nothing changes between now and February, when Fraser’s promotion goes into effect, she will set a new record as the 39th female Fortune 500 CEO, bumping the percentage to 7.8%.

Even these single-digit percentages are the result of years of dedicated effort among boards of directors and chief executives to identify high-potential CEO candidates and ensure that they get experience running large P&Ls as well as other training and top-level support.

“Generally these large companies promote from within. So you’ve got to really work with intentionality to sponsor [women], give them those hot jobs, and make sure you’re hiring or promoting without bias, to change the culture,” says Lorraine Hariton, CEO of Catalyst, a nonprofit focused on advocating for more women in executive roles. “It’s a slow process.”

At a time when corporate America is increasingly reckoning with the lack of racial diversity in its C-suites, few of those 39 female Fortune 500 CEOs are women of color, and none are Black. That may change in the future, as bringing more people of color into leadership tracks has “been the topic in the boardroom for the last several months,” Hanson says.

But companies and their boards will have to remain committed to this work for years before it may yield results—without relaxing their focus on increasing opportunities for women now that Jane Fraser has broken through one barrier.

“But we still have a long ways to go on this, and we can’t assume that it’s just going to happen. It takes great intentionality,” she adds. “It’s not like you name Jane and then it’s over. You need to continue to work on it.”