Voting by mail is more secure than the President says. How to make it even safer 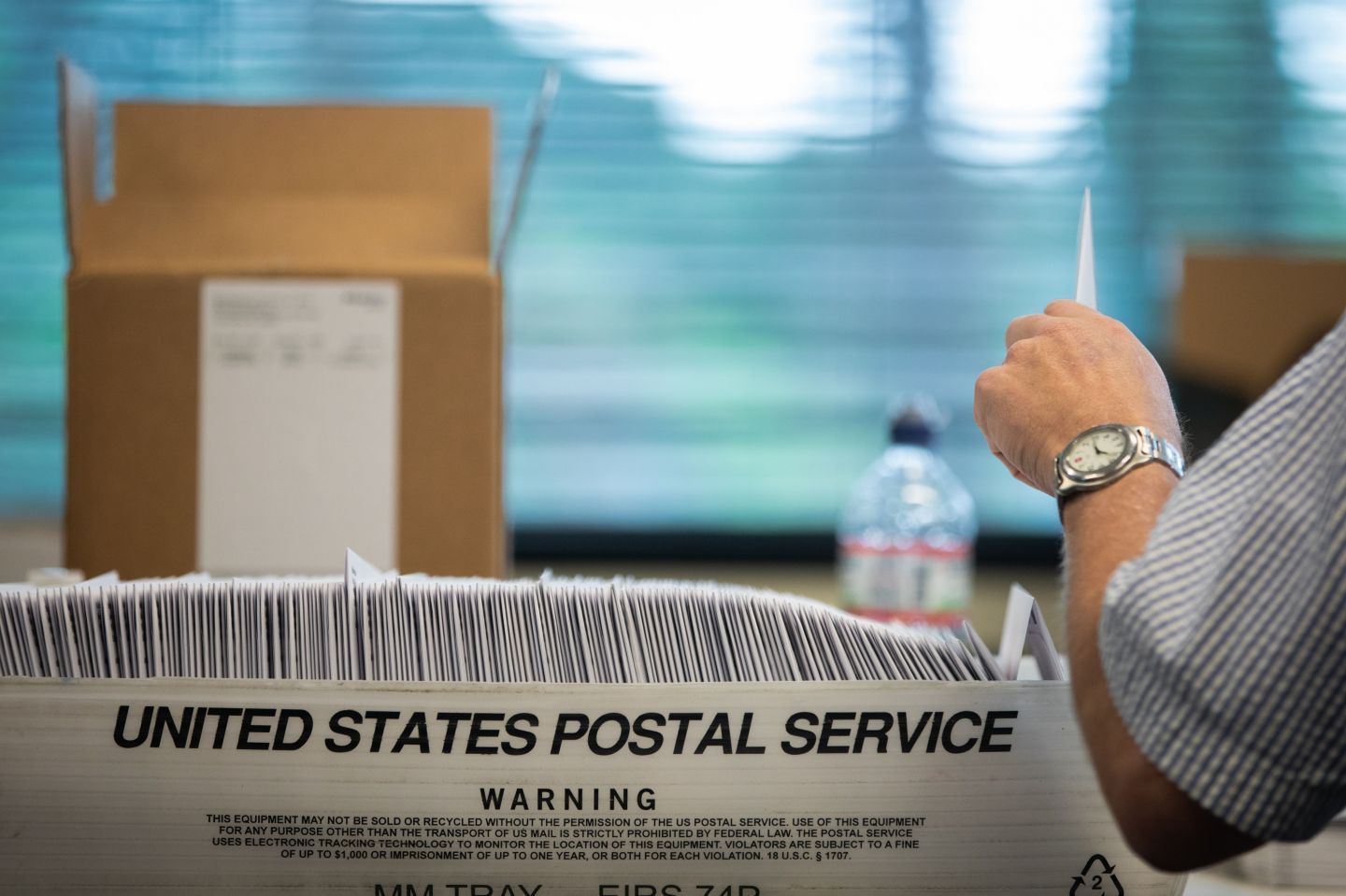 An election worker stuffs ballot applications at the Mecklenburg County Board of Elections office in Charlotte, N.C. "Some of the most widely circulated concerns surrounding mail-in voting fraud are not grounded in fact," the authors write. (Photo by LOGAN CYRUS/AFP via Getty Images)
LOGAN CYRUS—AFP/Getty Images

In the middle of the COVID-19 pandemic, widespread mail-in voting is essential to maintaining voter turnout and preventing the spread of the virus. Our unprecedented dependence on mail-in voting is precisely why it is important to take a serious look at the security of the process. We can only improve the safety of mail-in voting if we understand where there are legitimate concerns to begin with.

Some of the most widely circulated concerns surrounding mail-in voting fraud, however, are not grounded in fact. President Trump has alleged that widespread use of voting by mail would allow foreign countries to send in ballots and that there is “tremendous potential for voter fraud.” The technical reality is that fraud of the sort Trump has claimed is widespread would be easily detected by the ballot-scanning systems and ballot barcodes used by the majority of election jurisdictions. Ballot scanners verify that the ballot is printed on special ballot stock and most ballot envelopes have some kind of unique barcode that allows election officials to detect counterfeit ballots.

To be sure, there are valid concerns about the safety of casting your ballot via mail. A very real threat is that delays involving the U.S. Postal Service (USPS) will prevent voters from receiving or returning their ballot on time. In Wisconsin, thousands of mail-in ballots requested by voters in the state primary were never delivered to them due to postal delays. In New York, one in five mail-in ballots received by election officials were not counted, many because they arrived past the deadline.

To mitigate the risks of delivery delays, we need better ways for voters to track the status of their ballot in the mail. Most states and counties provide a website that allows voters to look up when their ballot was mailed and determine whether the returned ballot has been accepted by election officials. This is an important first step, but what these websites do not provide is the ability to track a ballot once it has left the elections facility. Recent reports concerning USPS mail slowdowns highlight the importance of enabling voters to track the location of their ballot at every step of the process.

USPS Intelligent Mail barcodes, used by the USPS to sort and track mail, provide this tracking capability. Many, but not all, election jurisdictions use these barcodes on ballot envelopes, allowing both USPS and voters to look up the status of their ballot. California Gov. Gavin Newsom signed an executive order in June requiring county elections officials to use Intelligent Mail barcodes on all ballot envelopes in the state.

This mail tracking capability increases accountability of the USPS and boosts public confidence in voting by mail. A crucial step towards a safer voting by mail process is for more jurisdictions to use intelligent barcodes on their mail-in ballots. Voters can then use ballot tracking websites and apps, which rely on these barcodes, to check the status of their ballot if their state has adopted a ballot tracking system. Ballot Scout, run by the non-profit Democracy Works, and BallotTrax, created out of the private sector, are two such websites used by states where a voter can enter basic identifying information, such as name and date of birth, and view their ballot’s delivery status. Increasing the number of jurisdictions that use these systems will help assuage voter concerns about ballots being lost in the mail or never arriving.

The tradeoff of enabling voters to easily view their ballot status is that others can look up their voter file, too. The information requested by these systems to verify a voter’s identity is often easily discoverable,

and sometimes even a matter of public record in states that make voter files public. For example, numerous media outlets reported the precise date Donald and Melania Trump’s ballots were mailed to his residence in Florida, a fact which they figured out by looking up the Trumps’ voter records on the Palm Beach County elections website. Given the limited timeframe between now and the November elections, the necessity of accurate ballot tracking outweighs concerns over ease of access to voter data, but these systems do raise important privacy concerns for consideration in future elections.

USPS delays are not the only concern. Online voter registration, while not unique to mail-in voting, is a critical part of the remote voting process. It makes registration significantly easier, but state registration websites can be compromised in cases where web security protocols are not up to date. This could allow a malicious actor to tamper with a voter’s registration, including preventing it altogether, or to steal a voter’s personal information. Many security holes can be fixed in time for November if states have the technical expertise to do so. States should also consider sending notices of any changes in voter registration to voters, as Florida already does, so discrepancies can be caught.

Like all voting methods, voting by mail is susceptible to small-scale fraud, but there is no evidence, technical or otherwise, that widespread fraud is possible. As we wrote in a paper in May, fraud involving mail-in ballots requires the creation of a paper trail, making it very difficult to scale. The far greater threat to mail-in ballot security is that delays in postal service will suppress the vote count and reduce public perception of the safety of the process. Intelligent barcodes and ballot tracking systems can help with this. States should make use of both of these safeguards as much as is feasible, this November and beyond.

Jenny Blessing is a graduate student at MIT and a research assistant at MIT CSAIL’s Internet Policy Research Initiative.  McCoy Patiño, Tran Nguyen, and Julian Gomez are recent graduates of MIT in computer science and are currently software engineers in the tech industry.