Trump has long wanted to kill a Russia-Germany natural gas pipeline. Navalny’s poisoning could do it for him 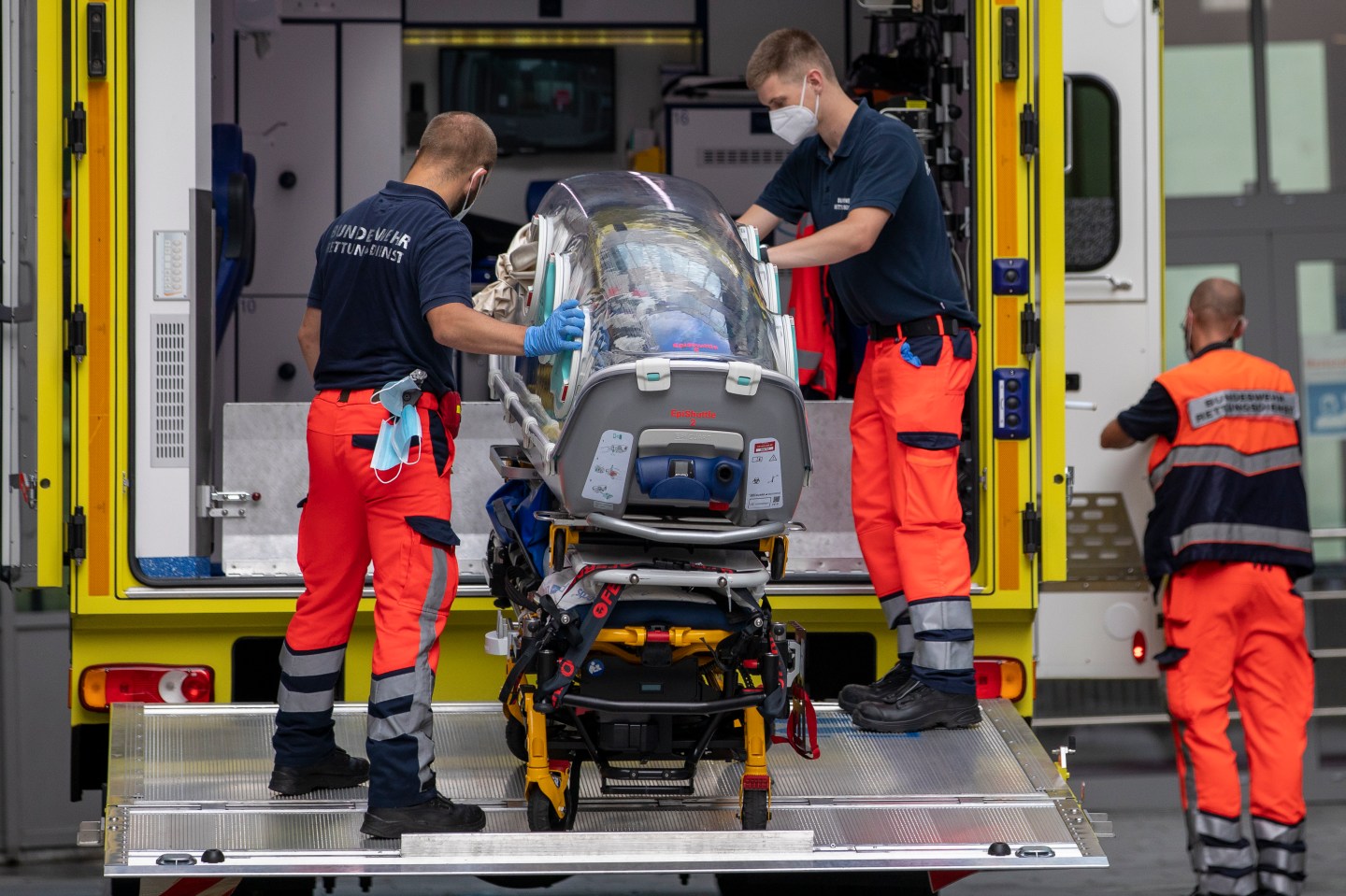 Thanks to the Kremlin, U.S. President Donald Trump may soon see one of his dearest wishes come true.

Nord Stream 2, a nearly completed project that would pipe natural gas from Russia under the Baltic Sea to Germany, has thus far withstood major diplomatic assaults from the United States. But now, with the poisoning of Russian opposition leader Alexei Navalny, there is growing pressure on German Chancellor Angela Merkel to kill the $11 billion scheme.

If Merkel does reverse her long-standing support for Nord Stream 2, as she has for the first time hinted she might do, the beneficiary would likely be the U.S.

Here’s a rundown of why Nord Stream 2 matters so much, and why the U.S. is so keen to see it fail.

Construction on Nord Stream 2 began in 2018, after Germany granted planning permission for its end point in the northeastern German town of Lubmin.

It did not take long for Trump to express outrage. “Germany is totally controlled by Russia,” he declared during a mid-2018 meeting with NATO top brass. The President tied the matter to his often-stated desire for NATO countries other than the U.S. to step up their defense spending. “So we’re supposed to protect you against Russia, and you pay billions of dollars to Russia, and I think that’s very inappropriate,” he griped.

The key issue here is Germany’s world-leading transition to renewable energy, known locally as the Energiewende. Nuclear and coal are being phased out in favor of wind and solar, but the transition will take time, and in the meantime some energy source has to fill the gap.

The dilemma was outlined crisply in a Tuesday Der Spiegel interview with Manuela Schwesig, the Social Democratic (SPD) state premier of Mecklenburg–Western Pomerania, the state where Nord Stream 2 will come ashore.

“Mecklenburg–Western Pomerania already covers its electricity needs entirely from wind power and so on, but Germany is an industrial nation with over 80 million inhabitants,” Schwesig said. “We need, at least for the transition period, natural gas to ensure a secure energy supply in Germany.

“If we don’t get the gas from Russia, the alternative is fracking-derived gas from the U.S.,” she noted. “This is certainly the worse alternative from an ecological standpoint, and more expensive too.”

As Trump put it at the start of this year (before COVID-19 and the oil-price crash threatened the viability of U.S. shale): “With an abundance of American natural gas now available, our European allies no longer have to be vulnerable to unfriendly energy suppliers either…We urge our friends in Europe to use America’s vast supply and achieve true energy security.”

The U.S. put muscle behind its criticisms of Nord Stream 2. Following an early-2019 warning from then–American Ambassador to Germany Richard Grenell, Washington followed through in December by formally threatening to impose sanctions on any company aiding the construction of the pipeline.

Allseas, the Swiss-owned contractor that was laying the pipeline, immediately suspended its work, leaving the project 6% shy of completion.

Gazprom, the Russian state-owned energy giant that is behind Nord Stream 2, responded by bringing in its own pipe-laying ship, the Akademik Cherskiy, though work on the system is still yet to resume. And this work is also being threatened by the U.S. Last month, U.S. Republican Senators Ted Cruz, Tom Cotton, and Ron Johnson wrote to the operators of Germany’s nearby Mukran port, warning them not to service Russian vessels that are trying to complete the pipeline.

But Merkel has so far backed Nord Stream 2 very firmly, despite criticism not only from the U.S., but also from closer to home.

Germany’s eastern neighbors, particularly Poland, have long criticized the scheme because they fear their own energy security is at stake.

Just last month, the Polish antitrust authority fined Gazprom—the state-owned Russian energy firm that owns Nord Stream 2—$59 million for its lack of cooperation in an investigation into the pipeline’s construction. Apart from Gazprom, the project is also backed by Austria’s OMV, Germany’s Uniper and Wintershall, France’s Engie, and the Anglo-Dutch Shell.

Central European countries don’t like the leverage Nord Stream 2 might give Moscow, and France is nervous about the same potential problem.

Many in Germany also oppose Nord Stream 2. A notable critic is Norbert Röttgen, the hawkish chair of the Bundestag’s foreign affairs committee, and one of the candidates to replace Merkel at the end of her current term next year. However, even Röttgen balked at the aggression of the U.S. over the matter, saying last year that sanctions would be “a heavy blow to trans-Atlanticists” such as himself.

The calculus of the controversy shifted last month, with the poisoning of Navalny.

The anti-corruption crusader was taken ill on a domestic Russian flight. His team claimed he had ingested poison, probably through some tea he had drunk. After some resistance, Moscow allowed him to be flown to Berlin’s Charité hospital for treatment. At the Charité, doctors concluded that Navalny had been poisoned with Novichok, a banned nerve agent that had also been used in the attempted murder of Russian dissident Sergei Skripal in the U.K. in 2018.

Novichok was a Soviet weapon, making it something of a calling card of the Russian intelligence services. So last Wednesday Merkel decried the “attempted murder by poison of one of Russia’s leading opposition members” and said there were “very serious questions now that only the Russian government can answer, and must answer.”

Thus far, Russia has refused to cooperate with Germany’s investigation of the Navalny affair, with the Kremlin denying any involvement.

Röttgen was quick to spring into action, saying on Friday that Germany has to engage in “hard politics” by speaking in the “only language” President Vladimir Putin understands: “That is gas sales.”

Annegret Kramp-Karrenbauer, the head of Merkel and Röttgen’s Christian Democratic Union (CDU) party, also weighed in with this: “I’ve always said that Nord Stream 2 is not a project close to my heart.” And here’s Jens Spahn, the health minister: “There’s no economic issue that would be more important to us than our foreign and security policy interests.”

Foreign Minister Heiko Maas jumped into the fray on Sunday, warning of possible sanctions on Russia. Then he dropped what most interpret as a threat against the pipeline project: “I hope that the Russians will not force us to change our position on Nord Stream 2.”

That hint was at odds with Merkel’s repeatedly stated position on the project; indeed, she said just last week that Nord Stream 2 should be “decoupled” from the Navalny case.

But on Monday, the Chancellor’s spokesman said she “aligned herself with the foreign minister’s statement,” and she believes “that it’s wrong to rule something out from the start” in Germany’s potential action over the Navalny case, given Russia’s unwillingness to help the investigation.

To be sure, a Merkel U-turn on Nord Stream 2 would come at a cost. The CDU’s junior coalition partner, the SPD, still backs the project, so the stability of their pact could be threatened (though it should be noted that Maas is a member of the SPD).

There’s also a risk that, by pulling out, Germany could be seen as bowing to U.S. pressure. As the SPD’s Schwesig said in her Tuesday interview, “Germany must be able to decide for itself from where and how it gets its energy.”

But a potential reversal now looks far more likely than it did before.