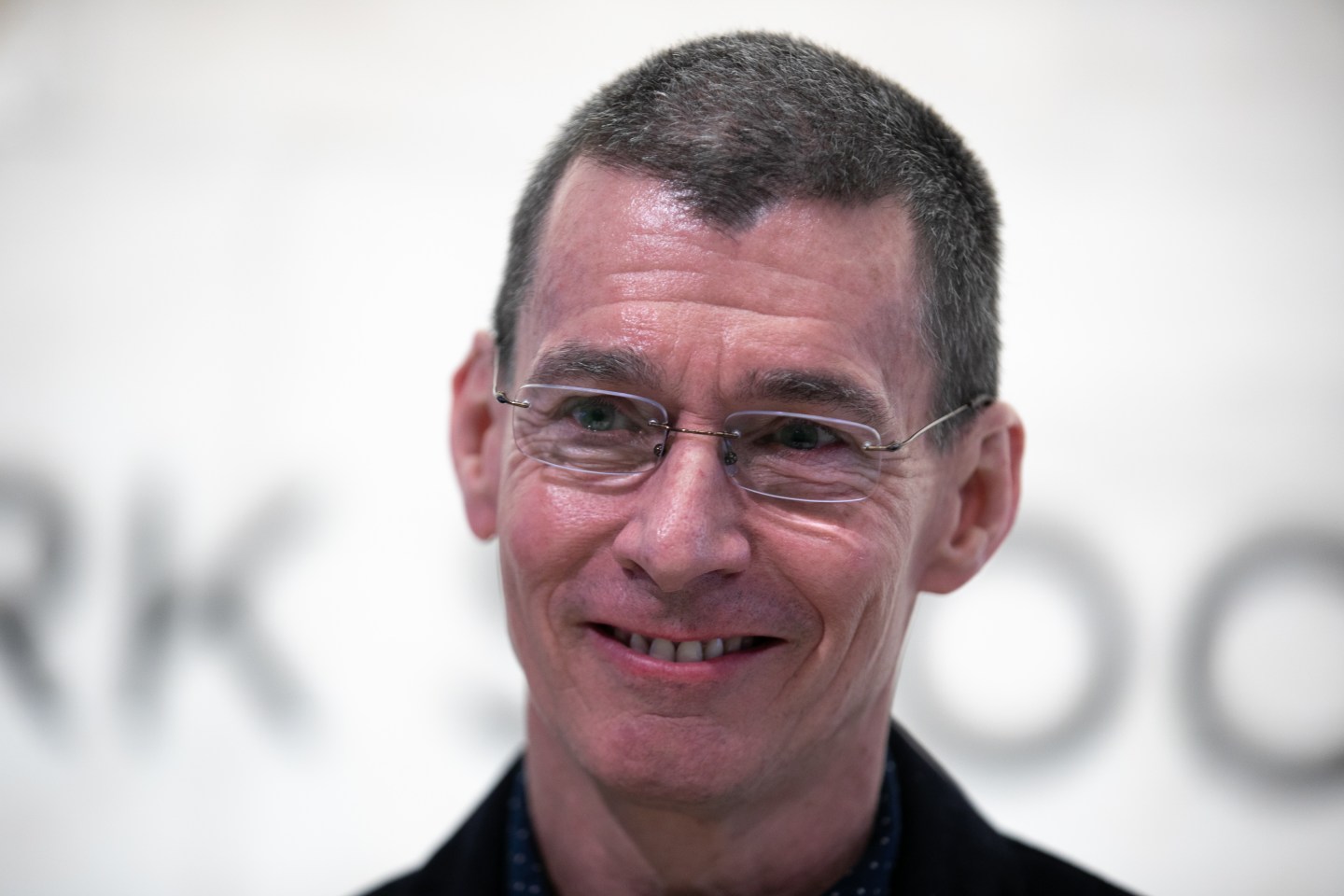 Chip Bergh, the CEO of Levi Strauss & Co., is not afraid of tough talk.

In November 2016, he wrote an open letter asking that gun owners not bring firearms into Levi’s stores or facilities, after a customer accidentally discharged their weapon while trying on jeans. “So, while we understand the heartfelt and strongly-held opinions on both sides of the gun debate, it is with the safety and security of our employees and customers in mind that we respectfully ask people not to bring firearms into our stores, offices or facilities, even in states where it’s permitted by law,” Bergh said.

Two years later, Bergh ramped up the company’s support for gun violence prevention by asking other business leaders to join Everytown Business Leaders for Gun Safety, a coalition dedicated to ending gun violence in the U.S. “While taking a stand can be unpopular with some, doing nothing is no longer an option,” he wrote in Fortune in September 2018.

That same month, Bergh decided to address voter apathy by encouraging employers to give workers time off to vote and backing initiatives for Levi’s employees to get registered and informed on the issues. “For a democracy to thrive, it must reflect the will of all the people—not the most powerful people, or the most vocal people,” he wrote. “Otherwise a vocal minority get to make the decisions for the majority.”

Bergh is back this week with a new Fortune op-ed that starts with an unflinching view of the recent shooting of Jacob Blake, Jr., an unarmed Black man, at the hands of the police in Kenosha, Wis., on Aug. 23. Shot seven times in the back in front of his children, “[Blake’s] name was added to the tragically long list of Black men and women killed or nearly killed by police,” Bergh writes. By way of contrast, Kyle Rittenhouse, the white 17-year-old who drove from Illinois to confront protesters in Kenosha with an AR-15 semi-automatic rifle —and who shot three people, killing two — was welcomed by police. “He later turned himself in, but this incident highlights that the right to bear arms in this country was initially and still is intended largely for white people.”

Bergh tells Fortune that this latest opinion piece, which touches on many aspects of the Black experience, reflects a deeper thinking on company’s commitments to social justice and the structural racism that makes their advocacy work necessary. “All of it has been happening for hundreds of years,” he tells Fortune. “It’s holding the country back from being our best possible selves…and it’s all interconnected.”

Our conversation has been lightly edited for length and clarity.

Fortune: Why did you feel this particular opinion piece was necessary now?

Chip Bergh: Well, it’s this whole thing [gestures at the world].  I do a lot of my best thinking just by writing, and I’ve thought deeply about racism in this country, and the impact that it’s having on the country right now.

But over the last couple of weeks, what I’ve really come to believe is that a number of these other issues that we’ve stood up for, in a way, are all interconnected to racism, to structural racism in this country — we say “structural,” not “systemic,” to remind everyone that these are manmade structures.

Fortune: The issues in the past being gun violence and voting rights?

CB: Yes. We didn’t take a stand on ending gun violence and the gun violence epidemic because of the impact that it has on perpetuating racism in this country.  We took a stand on it because it’s ripping the country apart. And it’s one of the biggest issues that young people of this country are concerned about. We know we can make progress there. We haven’t taken a stand to get out the vote because of how it contributes to structural racism in this country.  But now I’ve come to realize that the dots really all do connect here, that there is a link between the issues that we’ve taken a stand for historically and perpetuating racism in this country. And that’s why that’s why we wrote this piece.

Fortune: Who did you write it for?

CB: We talked last week (on Fortune’s Leadership Next podcast) about stakeholder capitalism. You know, one of the most important stakeholder groups I’ve got is my employee base. And this is a really hot topic right now. Number one. And number two, as I say [in the podcast] I straight up acknowledge we are not where we need to be in having a diverse, inclusive culture. And I’ve got a lot of work to do there. The fact that we’re not as diverse as we need to be, and particularly in the management ranks and at the senior management ranks, it’s holding us back…I say that it is probably the biggest blemish on my report card over nine years as a CEO. So, we do have a lot of heavy lifting to do. Authenticity is so important to who we are and what we are as a company, and it’s important that people know my authentic voice around this issue and my personal commitment to making progress.

And the same thing is true for us as a country. We’ve got racism issues in this country and these other issues of gun violence and voter suppression. The ability of people of color, particularly Black and brown people, to be able to access the polls and vote and have their voices and their vote count, are fundamental to making the kind of progress we need to make us as a country.

Fortune: You mentioned the op-ed came together quickly, over the weekend. Did you run it by Levi’s board first? I get the feeling they’re pretty clear about how you feel.

CB: No. It wasn’t necessary in this instance because we’ve talked through these issues with the board before, and they’ve been fully supportive of the actions we’ve taken and the statements we’ve made.

Fortune: You say in the piece that there can “be no bystanders in this effort” to end structural racism. But the call to action is implied, not fully stated. Ideally, what would you like to see from other CEOs or executives right now?

CB: I think other CEOs should step up and give their employees time off to vote, and join our Time to Vote campaign, which now has over 700 companies, over six million employees, including some of the country’s biggest employers. That’s number one. And then, number two, be transparent with your diversity data internally. And if you’re not where you need to be, take a stand on what you need to do to get where you need to be. And I would say if every CEO did those two things, as a country we’d make a lot of progress in starting to break down some of these racist barriers.

Fortune: You’re no stranger to taking bold stands. But the rhetoric and violence around these issues have clearly heightened in the last few years. Can you talk about the backlash you’ve received in the past and what you might expect now?

CB: I am blessed that I work at a company where there is a long tradition of our CEOs not being afraid to take stands on important social issues of the day. It’s part of who we are as a company. You know, when we took first our stand on ending gun violence, I had death threats.  I had unmarked police in front of my house for weeks, and following my wife driving my daughter to school. I mean, that comes with the job, I think. And you know, this issue is also pretty hot and topical right now. And I wouldn’t be surprised if there is some blowback from it.

But, you know, you can’t be driven by fear. You have to be driven to do the right thing. And I really do believe that CEOs have a responsibility to make to make this world better and to take a stand for the issues that really do matter most in society. And this one is is a big one for us as a country and for us as a company.

Fortune: That said, this has been an unusually stressful time. I’m increasingly worried about the mental health of the workforce, and that includes chief executives. CEOs need to stand up in ways they may have not before. Any advice for surviving that?

CB: We’ve actually started to spend a lot of time talking as a leadership team about mental health and wellness overall. Just working from home — or sleeping in the office — as people are now jokingly calling it. My office is about five steps from my bed. We have a number of initiatives going… for me it’s all about balance, prioritization and prioritizing the time for the things that are important to me, my family, my own health and well-being.  I work out every day, and that really helps a lot. Because every minute is scheduled with video calls, we’ve lost the spontaneity of walking down the hallway and dropping in on somebody, or that casual stairwell conversation—a lot of that is gone. And I think it adds to the stress because you don’t have those casual moments to interact where some of the best ideas come from.

All that said, I’ve had my moments, too, where I’ve gotten really really bummed out, or depressed, or wherever you want to call it, about just the situation, because there’s so much uncertainty. Not knowing what’s around the next corner, will we have a second wave [of the coronavirus]? That’s completely beyond our control. So, it is by far the most stressful period I’ve ever navigated in my 40 years of doing what I’m doing.

The only other two things I would add is eat healthy and get plenty of sleep.