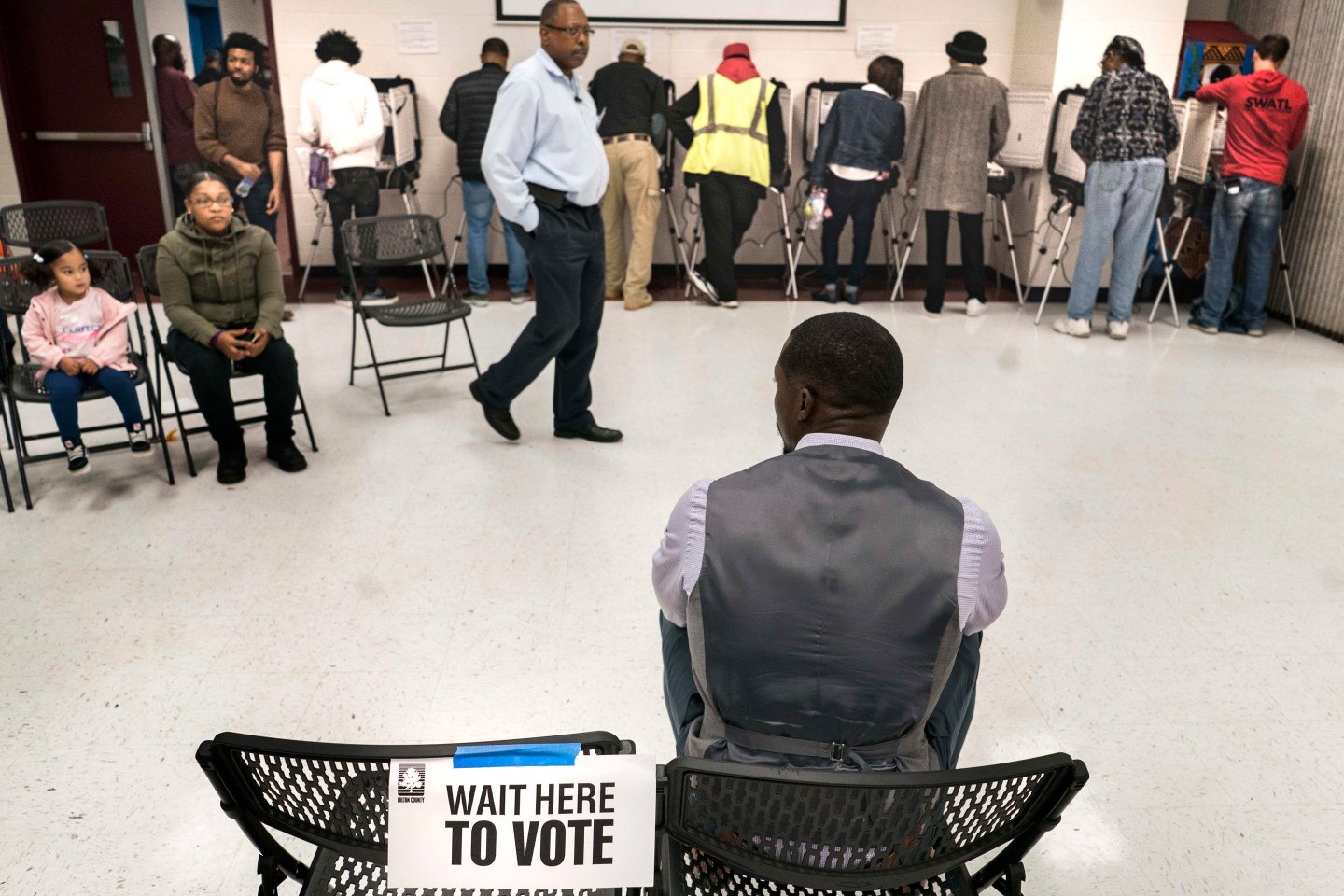 ATLANTA, GEORGIA - On election day at Pittman Park Recreation center polling location thousands of American voters stand line to vote in Atlanta, Georgia on Tuesday November 6, 2018. The polling place received a limited amount of voting machines, three to begin the day and five where added later. But still the amount of voting machines can not handle the amount of voters showing up to vote. (Photo by Melina Mara/The Washington Post via Getty Images)
Melina Mara—The Washington Post/Getty Images

That’s what Gianna Floyd said about her father, George, after he died in Minneapolis police custody in May.

She was right. George Floyd’s death spurred worldwide outrage and a wider reckoning with structural racism in America. Black Lives Matter activists awakened millions to the killings of Black Americans by those sworn to protect them. More and more people, especially white people, started to grasp how pervasive racism remains and the constant danger Black Americans face every day.

Companies like ours also came to understand that we must play a role here. For Levi Strauss & Co., that started with elevating a focus on racial justice alongside our work on gun violence prevention, voter turnout, and voter rights. For me personally, it meant committing to more deeply examining my own privilege and improving diversity throughout our company. This also reinforced for me the sense that we can’t speak of issues like gun violence and voter disenfranchisement in isolation without also addressing the structural racism they both stem from and propagate. [Editor’s note: Bergh spoke about this and other issues in an interview with Fortune on Monday.]

It was clear we had a lot to do.

Then came the Aug. 23 police shooting of a Black man in Kenosha, Wis. According to a video, an officer shot Jacob Blake seven times in the back, leaving him paralyzed, as his children watched. As Blake’s name was added to the tragically long list of Black men and women killed or nearly killed by police, we had another reminder that the world, in many ways, was still very much the same.

Something else became very apparent a few days later—the glaring inequity in the way law enforcement views gun possession in the U.S. According to a Milwaukee Journal Sentinel report, Kyle Rittenhouse, a white 17-year-old, traveled from Antioch, Ill., to Kenosha with an AR-15 semiautomatic rifle to, in his words, protect local businesses and people. He reportedly received a warm welcome from local law enforcement: “We appreciate you guys,” one officer told him in a video, referring to Rittenhouse and other armed people he was with. After that, Rittenhouse shot three people, killing two of them, then walked away right past police and drove home.

He later turned himself in, but this incident highlights that the right to bear arms in this country was initially and still is intended largely for white people, while minorities can be killed if they’re suspected of even having a gun.

Tamir Rice, 12 years old, was killed while playing with a toy gun in Cleveland in 2014. John Crawford III, 22, was killed the same year inside an Ohio Walmart because he was carrying a BB gun he’d picked up at the store. Philando Castile, 32, was killed in 2016 by police outside Minneapolis after he told them he had a licensed gun in the car. And this past March, Breonna Taylor, a 26-year-old emergency medical worker, was shot dead in Louisville, Ky., when her boyfriend used his firearm to defend her from plainclothes police entering her apartment with a no-knock warrant.

There have been many other examples. A study by the Harvard T.H. Chan School of Public Health found that in the years between 2013 and 2017, Black people were two to six times more likely to be killed during encounters with the police than white people, depending on the region of the country.

Black people are not only more likely to be killed by police for possibly carrying guns, they are also more likely to be convicted of gun-related felonies and receive harsher sentences. That’s partly why the number of Black people with felony convictions increased fivefold between 1980 and 2010, and why one-third of Black men now have felony records.

Because many states block people with felony records from voting, the reality that justice is not in fact blind drives voter suppression. Structural racism influences voting in more direct ways as well. During the recent primary season, Wisconsin, Georgia, and Kentucky closed numerous polling places in minority-heavy districts, forcing residents to travel farther and wait for hours, at increased risk because of the coronavirus pandemic. Eligible voters have been disenfranchised in purges of voting rolls in several states.

After Florida restored voting rights in 2018 to those previously convicted of felonies, the U.S. Supreme Court upheld a new law requiring payment of all outstanding case fees before casting a ballot—a modern poll tax affecting more than 775,000 people. Looking ahead, the validity of mail-in ballots is being preemptively undermined, while armed groups are vowing to “defend” polling places.

I’m the first to admit that I’m still learning and that we have work to do in our own house. But the more I comprehend how structural racism intersects with gun violence and voting policies—as well as with environmental justice, financial opportunity, education, and other aspects of life—the more I am committed to using my and our company’s platform to highlight and address the human-made structures that nurture America’s racial caste system.

There can be no bystanders in this effort. Amid the recent tragedy, I was heartened to see images from the March on Washington on Friday and to hear NBA and WNBA players push owners to use publicly funded arenas as voting places. I especially appreciate the chorus of voices urging people to vote and raising the alarm on voter suppression efforts (as we’ve been trying to do through the Time to Vote coalition, by helping people get registered and by supporting groups working to secure the right of all citizens to participate in our democracy).

I know Black Lives Matter. I want my children to think the world of their dad the way Gianna Floyd thinks of hers. I assume Jacob Blake’s dreams and love for his children are as vivid as the love and dreams I have for mine.

There can’t be racial equality as long as gun violence and voter disenfranchisement persist. It’s on all of us to confront both racist acts and the structures in our society that enable those acts, to make our voices heard, to vote, and to work to ensure others can vote, too. It’s the only way to honor those we have lost, to uphold the ideals this country is supposed to rest on, and to build a stronger, fairer republic for everyone.

Chip Bergh is the president and CEO of Levi Strauss & Co. and serves on the company’s board of directors.