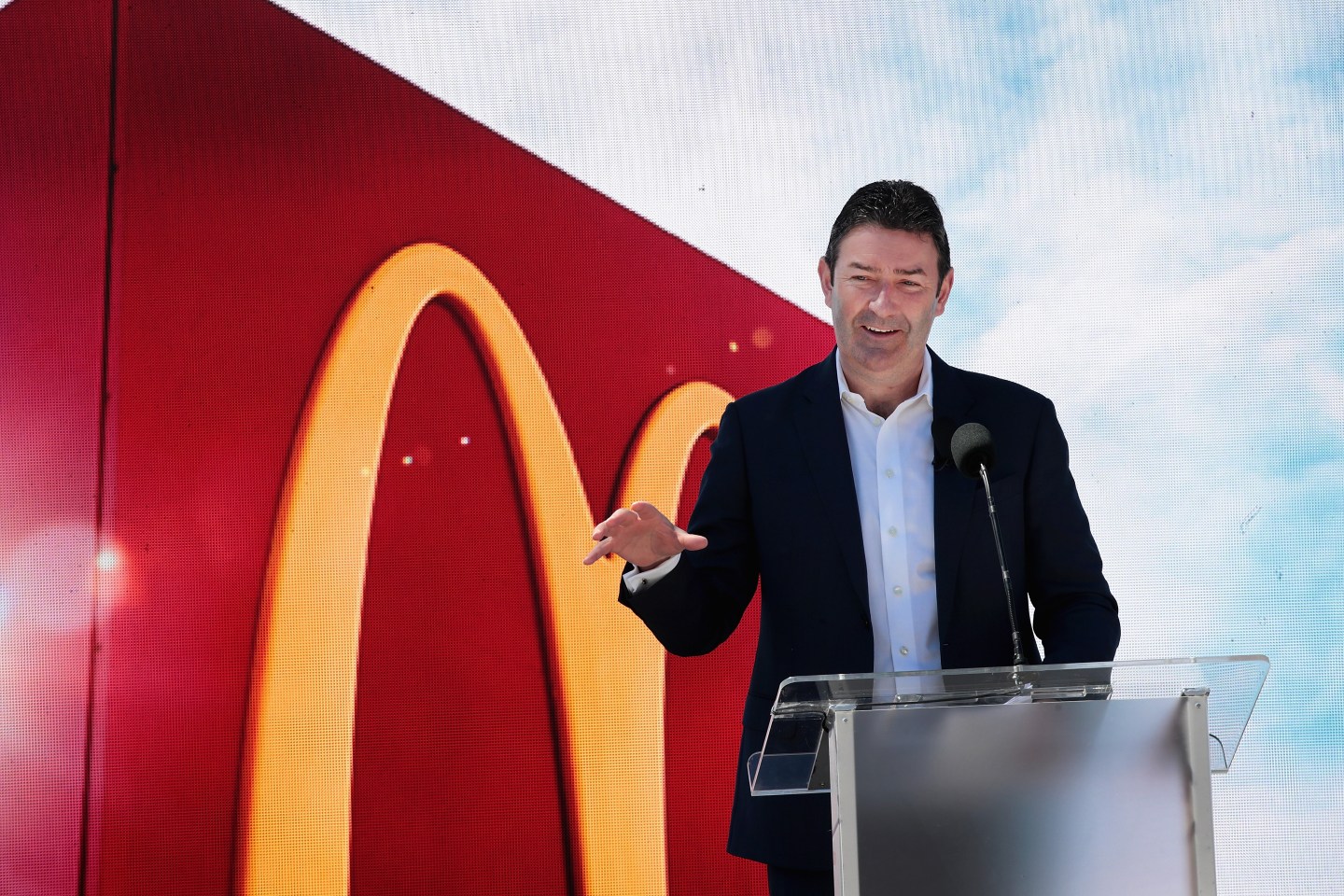 Former McDonald's CEO Steve Easterbrook in 2018. The company filed a lawsuit against him on Monday.
Scott Olson—Getty Images

On this story there would be no Friday afternoon news dump—the preferred modus operandi of companies trying to hide the likes of bad earnings or legal proceedings.

Instead, McDonald’s filed its lawsuit against former CEO Steve Easterbrook first thing on Monday morning. Those fishing around for the complaint, filed in Delaware state court, did not even have to look very hard: McDonald’s included it as part of its filing with the SEC.

The suit alleges that Easterbrook, who was fired for sexting with a subordinate, did far more than that. The complaint claims that “recently identified evidence shows that Easterbrook had physical sexual relationships with three McDonald’s employees in the year before his termination; that he approved an extraordinary stock grant, worth hundreds of thousands of dollars, for one of those employees in the midst of their sexual relationship; and that he was knowingly untruthful with McDonald’s investigators in 2019.”

With these alleged new revelations, McDonald’s is now arguing that it had cause to fire Easterbrook and in turn wants him to repay his severance, which the New York Times has reported is valued at more than $40 million.

It’s highly unusual for a company to opt for such a public airing of its dirty laundry. And there’s plenty of it here. The suit alleges that newly discovered evidence “consisted of dozens of nude, partially nude, or sexually explicit photographs and videos of various women, including photographs of these Company employees, that Easterbrook had sent as attachments to messages from his Company email account to his personal email account.” The complaint also claims that Easterbrook deleted this evidence from his phone “with the intention of concealing their existence.” A call by Fortune to Easterbrook’s lawyer was not returned.

Why would McDonald’s want to shine a spotlight on the alleged malfeasance of its former CEO? As longtime industry watcher Jonathan Maze, editor-in-chief of Restaurant Business Magazine, tweeted, “Point is: McDonald’s likely sees this lawsuit as good press and not bad.”

To be sure, McDonald’s has received plenty of bad press in recent years related to the working environment in its stores, with numerous lawsuits accusing the company of failing to respond to a culture of sexual harassment.

An article in The Nation from late July, for example, cited a poll conducted by a coalition of U.S. labor unions, with three-quarters of respondents saying they had experienced sexual harassment on the job. Two-thirds said they had experienced multiple forms of harassment. Nearly 30% had been asked to have sex with a coworker, and 12% said they were sexually assaulted or raped. (McDonald’s responded by saying the survey represented less than 0.1% of employees in its U.S. restaurants.)

In April, two McDonald’s store employees filed a $500 million class action lawsuit accusing the company of creating an environment of rampant sexual harassment. The suit is backed by Time’s Up Legal Defense Fund, which pays legal fees for victims of sexual assault and harassment and is not the only one the organization is funding against McDonald’s.

When Easterbrook was fired last year, it was easier for critics to make the argument that the tone was set from the top. Now with its suit against its former CEO, McDonald’s is effectively distancing itself from Easterbrook and his alleged bad behavior. It’s a chance to show how seriously the company takes the improper conduct of its employees—even those at the highest level.

In addition to making its case against Easterbrook, the complaint filed on Monday spends just as much time stressing the importance of the company’s ethics and values.

For example, the suit says that in 2017 the board “emphasized to management that all employees, including top executives, should undergo the most current anti-harassment training.” The suit claims that management, including Easterbrook, “assured the directors that the senior leadership team was receiving such training and that the Company was implementing enhanced safe and respectful workplace training throughout the organization.”

The complaint also notes that the company revised its anti-harassment policy in 2019 after input from nonprofit organizations, to more clearly inform employees of their rights and more clearly define unacceptable behavior and how to report it.

Integrity is the message the company is pounding in its internal communications as well. A memo obtained by Fortune that was sent to company employees by chief people officer Heidi Capozzi and an email sent by CEO Chris Kempczinski to the entire McDonald’s system together mentioned “values” 16 times. McDonald’s declined to comment on the record beyond providing the email sent by Kempczinski.

In a press release in response to Monday’s filing, Amanda Harrington, vice president of communications at Time’s Up Now, put it bluntly, saying, “McDonald’s has a sexual harassment problem, plain and simple.”

But with its lawsuit, the company is attempting to make the case that it’s Easterbrook’s problem, not McDonald’s.