Valuation: A crisis in the 1990s poised this aerospace stock for a great run in the 2020s 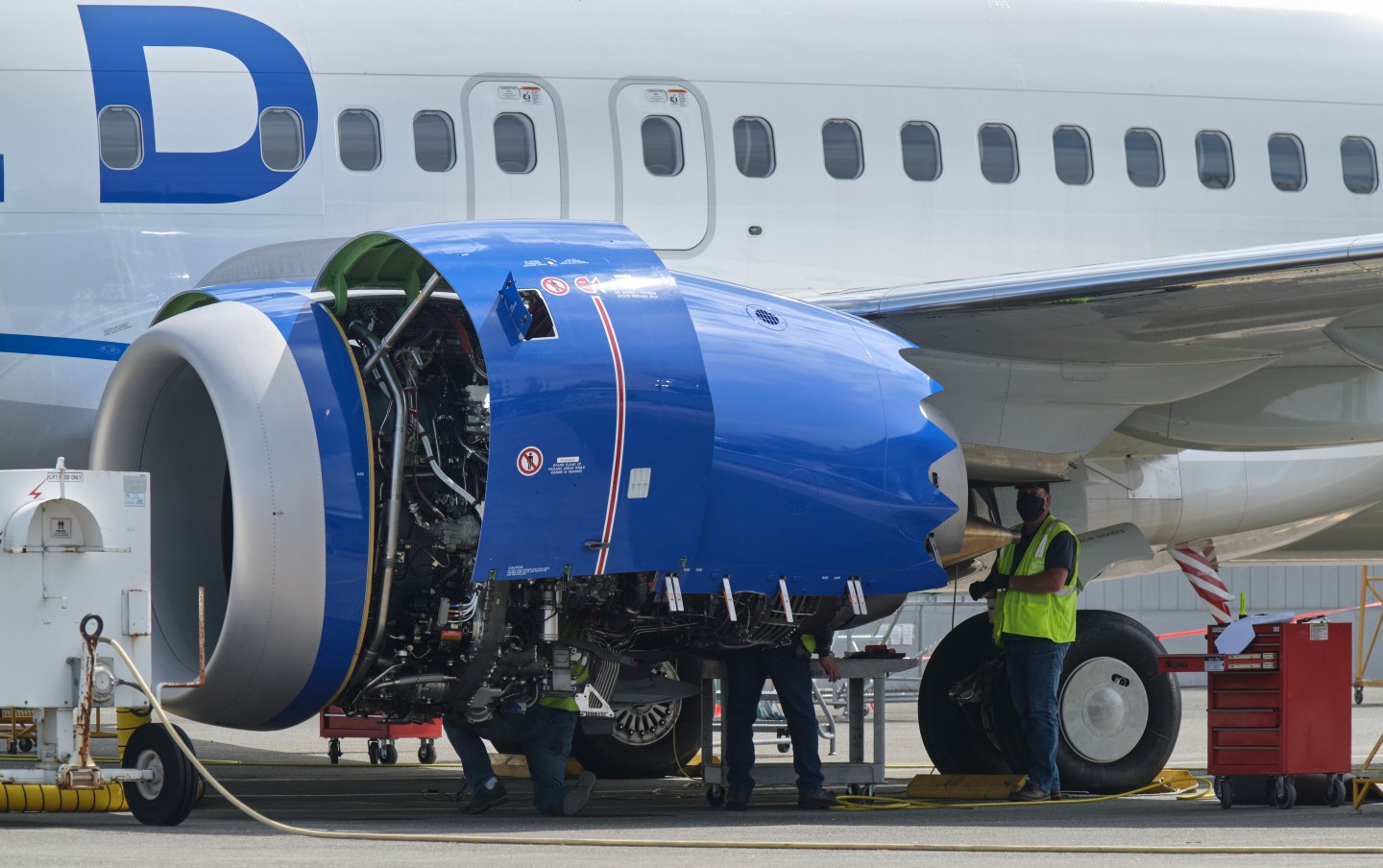 An employee works on the engine of a Boeing 737 MAX airplane at the company's factory in Renton, Wash. Boeing is a major client of aerospace firm Woodward. (Photo by Stephen Brashear/Getty Images)
Stephen Brashear—Getty Images

“The key to investing is not assessing how much an industry is going to affect society, or how much it will grow, but rather determining the competitive advantage of any given company and, above all, the durability of that advantage.”
—Warren Buffett, Fortune, 1999

In a recent column, I wrote about my conviction that some aerospace companies are poised to succeed in the long run, even though the COVID-19 crisis has depressed their share prices in recent months. My firm, Gravity Capital Management, owns a few such stocks; in this column, I’ll focus on one of them that looks particularly investable at current prices.

Woodward (Ticker: WWD; $72 a share; $4.5 billion market capitalization as of market close June 24) dominates the market for jet-engine fuel systems, the components that introduce the fuel into the engine and then regulate and monitor it. The company was incorporated 150 years ago, in 1870, to regulate the motion of waterwheels. Run by Woodward family members or close associates for the next 125 years, Woodward moved from waterwheels to industrial turbines and then, in the 1930s, into aerospace controls.

Woodward focused on engineering excellence, and by the late 20th century its products were so good that, like many firms, the company began to coast on its reputation. It didn’t help that as the generations passed, it was assumed that a Woodward family member would become the next CEO; the last such CEO, in fact, started his Woodward career in lawn maintenance. The beauty of capitalism, however, is that the market’s invisible hand eventually puts its finger on such mediocrity and complacency. Smarter, hungrier competitors were out-innovating Woodward, and in the 1990s the company faced a reckoning.

In 1993 and 1994, Woodward received word from the major engine makers that it had failed to win bids for many of the new engine designs, including the CFM56, the world’s bestselling engine, which is manufactured by a joint venture between General Electric and Safran, a French company whose stock Gravity also owns. For engines on Airbus narrow-body aircraft, only one or two Woodward parts would be used; for engines on Boeing narrow-bodies, Woodward was completely shut out. Because these engines are redesigned only once every 25 years, this meant that Woodward would be disadvantaged for the next generation.

“I remember that day quite well,” says current Woodward CEO Tom Gendron, who was then leading the marketing and R&D functions at the company. “It was both the worst day and the best day of my career. Without those losses, we wouldn’t have had the impetus to change.”

Faced with such setbacks, Woodward named its first outsider CEO ever—John Halbrook, a finance executive who’d spent time at both General Electric and General Dynamics. Halbrook wasted no time changing the way business was done at the company. “For many years, our product base was fairly stable and did not require the time, energy, and expense of expanding our technology,” he wrote in the company’s annual report shortly after taking over. “Today, merely maintaining basic core technologies no longer is sufficient.”

To accelerate change, Halbrook invited Woodward’s top customers to deliver their assessment of Woodward to the company’s top 100 executives. “The first ones,” company treasurer Don Guzzardo remembers, “were brutal.” At every board meeting for the next 20 years, regaining a place on the next-generation narrow-body engine was at or near the top of the agenda—80 meetings in all, Gendron recalls.

This next engine cycle, Woodward resolved, it would win not only individual component business but business for the entire fuel system: the fuel injectors, metering valves, actuators, and pumps, all integrated into one superior system. By making such a unit, Woodward executives reasoned, they would not only add more value to the customer­—they would also make it harder to replace Woodward with a competitor’s one-off components.

The goal was to make a product so good that the world’s major engine makers would find it very difficult to make a next-generation product without Woodward this time around. And over the course of the long wait for the next engine product cycle, Woodward succeeded. In the mid-2010s, it won the combustion system and a variety of other components on United Technologies’ new GTF engine, which will power 20% to 25% of the world’s next-generation narrow-body fleet. It won the entire fuel system on the GE9X, the new engine for wide-bodies. And when it came time to award the most lucrative fuel-system contract of all—for the CFM56’s successor, the LEAP, which will power 75% to 80% of the world’s new narrow-bodies—GE awarded it to Woodward without even putting it out to bid. Woodward’s system was so far beyond the competition that GE’s engineers didn’t want to consider anyone else’s product.

Woodward’s content on LEAP engines for both Boeing and Airbus will now number more than a dozen components, up from only one or two on Airbus and zero on Boeing. As a result, in a few years, as these next-generation engines enter service, Woodward will have four times the number of components in service on commercial aircraft than it did less than a decade ago. Woodward, moreover, will be the only manufacturer of most of these components. This means that they will have a sole-source position in the lucrative spare-parts market for the next 25 years. And because Woodward has already done all the upfront investment in new plants and equipment to manufacture these parts, the company is set up for a super-cycle of highly profitable growth between now and 2050.

The coronavirus, of course, throws a rather large monkey wrench into the timing of this super-cycle. These next-generation engines were introduced into commercial service only a few years ago; how can Woodward’s market-share gains develop when 90% or more of the world’s fleet is grounded and nobody is buying new planes? Compounding the delay is the fact that Boeing’s next-generation narrow-body, the 737 MAX, has been grounded for safety reasons.

While the pandemic pushes Woodward’s growth trajectory out several years, in no way does it derail it. In this way, what has happened to Woodward’s stock price, thanks to the coronavirus, is a textbook example of temporary rather than permanent loss.

As with Wells Fargo in early 2009, however, the market isn’t telling us that. Woodward’s stock is down around 40% year to date, and it’s trading for 13 times its 2019 cash earnings of $5.60. While there’s no question that this $5.60 of earnings will represent peak profits for several years, there’s also no question in my mind that at some point Woodward will blow past this number.

Woodward, let’s recall, will soon have four times the number of components in service than it did a few years ago. In 20 years, when the legacy engines are largely retired, Woodward will have much more than that. Run this math out and factor in that the spare parts carry high operating margins, and it is easy to see that at some point in the future Woodward’s earnings should double.

This earnings stream is valuable not only because it will grow; it is also highly predictable. With sole-source positions in many of its key parts, and with these key parts necessary for the maintenance of the world’s jet engines for the next 25 years, Woodward’s earnings are about as locked-in as you can find. Such annuity-like earnings streams are rare and therefore highly prized on Wall Street. Because of this, I believe that at some point Woodward will be rewarded with a multiple nearly double today’s. The best aerospace companies, including Heico, another Gravity aerospace holding that has a predictable stream of aftermarket profits, trade for 25 times earnings or even higher.

The resulting math is simple: When earnings double and the multiple roughly doubles, Woodward’s stock price will roughly quadruple. The uncertainty injected by the pandemic and the 737 MAX delays make it hard to forecast when this will occur, but we can run some simple sensitivities to determine how the stock would perform under certain scenarios. If the compounding takes eight years, we will make 18% a year, more than twice the market’s historical annual return of 7% to 8%. If it takes 10 years, we will make 14% a year. In fact, we will still earn a market-average return even if we must wait nearly 20 years for these developments.

This is why it pays to be a long-term investor. The market can zig, and it can zag, but when you buy companies with strong long-term futures you can be confident that any losses in the short-term are simply that—short-term. You can even be happy when your favorite businesses decline in their quoted stock-market value. They’re not losing you money—they’re just temporarily on sale.

Not surprisingly, Woodward executives look at it similarly. “I remember in the financial crisis, our stock plummeted,” CEO Gendron says. “People were coming to me and saying, ‘How did we lose all this value?’ I said, ‘The value of Woodward is still there. Our trading value may be down, but our intrinsic value hasn’t changed—in fact, it’s growing.’ And it’s the same this time around.”

Adam Seessel is the portfolio manager at Gravity Capital Management LLC, a registered investment adviser. Certain of the securities mentioned in the article may be currently held, have been held, or may be held in the future in a portfolio managed by Gravity. The article represents the views and belief of the author and does not purport to be complete. The information in this article is as of the publication date, and the data and facts presented in the article may change.