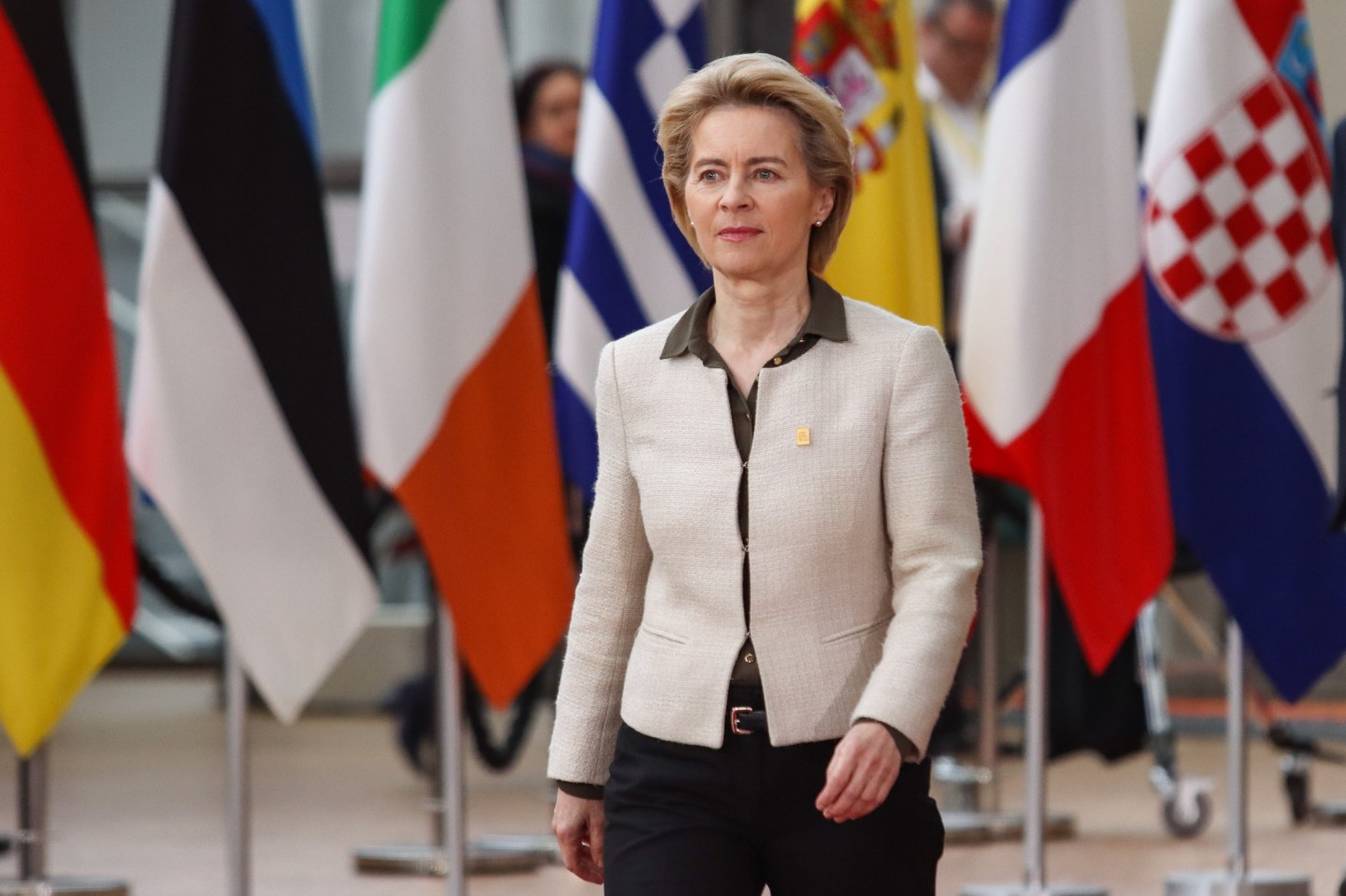 President of European Commission Ursula von der Leyen as seen arriving on the red carpet with the EU flags in the background, at the special European Council EUCO, EURO summit, EU leaders meeting in Brussels, Belgium about the future planning of the next long term budget of the European Union - EU on February 21, 2020.
Nicolas Economou-NurPhoto via Getty Images

Conspiracy theorists may absurdly claim that 5G is somehow behind the spread of the novel coronavirus. But as far as the European Union is concerned, the mobile technology will prove a vital part of the cure that will help the bloc recover from the widespread economic destruction caused by the pandemic.

When it proposed a 750 billion euro ($826 billion) recovery package on Wednesday, the European Commission said it would “press fast-forward” on the EU’s digital transition.

“The pandemic and its consequences on our lives and economies have highlighted the importance of digitization across all areas of EU economy and society,” the EU executive branch said. “New technologies have kept our businesses and public services running and made sure that trade could continue flowing. They have helped us all to stay connected, to work remotely, and to support our children’s learning.”

That means investment in more and better connectivity, starting with 5G. Not only will the new technology provide the bandwidth required by health, education, logistics, and other sectors, the commission said, but it will also “increase Europe’s strategic autonomy.”

Running with the same theme, the commission also said it would move to ensure Europe wasn’t so dependent on other countries for strategic parts of the digital supply chain. So get ready for recovery grants to be steered toward not only 5G networks—and “6G networks,” although 6G is not actually a thing yet—but also fields such as artificial intelligence, cloud infrastructure, and secured communications.

These are areas the commission was already intending to push, but now it sees them as more urgent, because of their strategic importance to the economic recovery process. The same goes for the other big area where the commission is pressing fast-forward: Europe’s green-tech transition.

On the green front, the plan is to create new jobs through the shift to cleaner energy—and, again, to reduce the EU’s dependence on external fuel suppliers.

“We can now lay the cornerstone for a union which is climate neutral, digital, and more resilient than ever before,” said European Commission President Ursula von der Leyen as she presented the proposals to the European Parliament, which will—along with the EU’s member states—need to approve the package before it becomes reality.

That approval will follow a series of negotiations that are likely to continue through much of the year. Some serious disagreements remain unresolved, not least of which is the opposition by four countries—Austria, the Netherlands, Denmark, and Sweden—to the idea of disbursing grants to countries. These “Frugal Four” nations would prefer to see loans with conditions attached, whereas France and Germany favor unconditional grants. The commission’s proposal is an attempt to find a middle path—mostly grants with some loans—but as a Dutch diplomat told Politico, “It’s difficult to imagine this proposal will be the end state of [the looming] negotiations.”

Even then, Deutsche Bank analysts noted in a Thursday research report, it is “less than clear” that the recovery plan and the EU’s longer-term green and digital targets “can easily be streamlined,” particularly as the targets “require substantial economic restructuring.”

“Knowing that it would be a formidable task to find consensus between 27 members with strongly diverging views and interests, many aspects have been left vague and open for the upcoming negotiations,” the analysts wrote.

5G, which promises blazing fast mobile Internet speeds and the ability to connect billions of “smart” devices, has been deployed across 10 European countries, and is seen by policymakers as an important technology to make economies more competitive. In 2016, the commission set a 2025 target for achieving “uninterrupted coverage of all urban areas and major terrestrial transport paths.”

The telecom industry was quick to respond to the commission’s proposal with specifics. Also on Thursday, the European Telecommunications Network Operators’ Association (ETNO) issued a paper calling on the commission to ease the rollout of 5G networks by exempting parts of those networks from the permit process and reducing the taxes and fees that some countries charge operators.

ETNO also pointed out that the coronavirus pandemic had actually delayed some of the radio-spectrum auctions that are needed to free up frequencies for 5G: The auctions are delayed in countries including Spain, Austria, Portugal, Poland, and Czechia.

The trade group argued that the commission should try to better coordinate the spectrum-allocation process, to “facilitate both operators and societies through the crisis.” It also called on the commission to ease competition rules to enable operators to collaborate more on network rollouts.