Earth Day photo essay: How far have we come in 50 years? 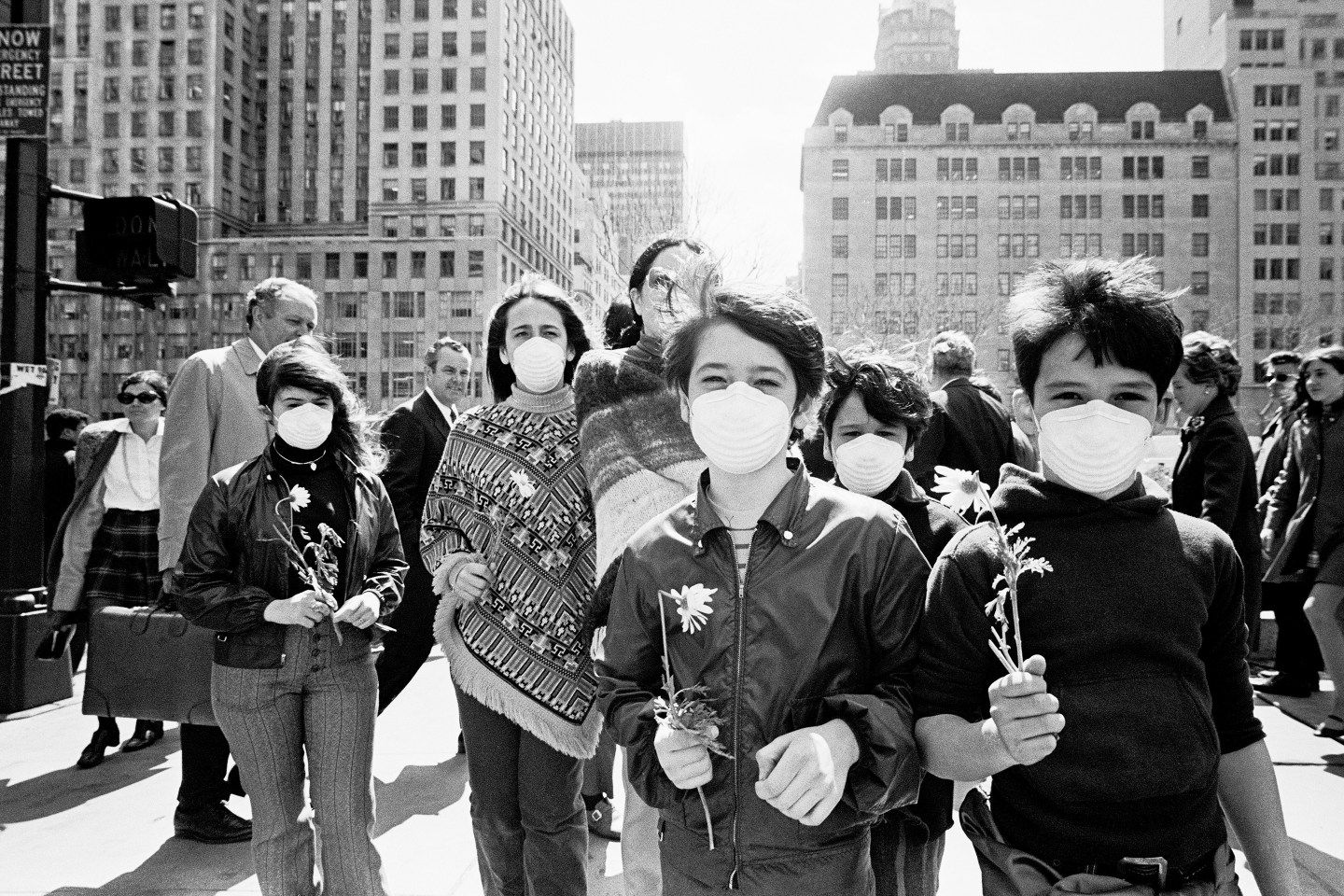 Today marks the 50th anniversary of the first Earth Day, founded in 1970 by a mix of senators and young activists, marked with a protest of 20 million people across the U.S. Coming in the years after the publication of Rachel Carson’s Silent Spring, which prompted widespread alarm over the impact of human activity on the natural world, that first protest marked an explosion of environmental activism—and helped spur a rapid expansion of government legislation to protect animals, water sources, air, and people, the bedrock of environmental protections in the U.S.

The obvious question, half a century later, is: How far have we come since then? The answer, scores of climate experts will tell you, is not nearly far enough. Last year, the Trump administration officially gave notice that the U.S. would withdraw from the Paris Agreement, the largest global commitment the world has made to avoid the worst results of climate change, but many states said they would continue to honor the agreement.

The spread of COVID-19, and the ensuing global lockdowns and financial crisis, now claim our full attention—often at the expense of our efforts to limit climate change. At first glance, it may seem natural that our current crisis overrules the ongoing crises of changing temperatures and biodiversity loss, but that couldn’t be further from the truth. Virologists and scientists say that our broken relationship with nature is at the very heart of this pandemic. Accelerating biodiversity loss—caused by a mix of pollution, over farming, urbanization, and changing temperatures—has made complex ecosystems much simpler and more unstable. That makes it easier for viruses to jump from animals to people, as they have begun to do with alarming frequency.

There is no simple solution to COVID-19. There is also no simple solution to turning back the clock on 50 years of rising temperature and lost ecosystems. But even in the months and years before the global pandemic turned daily life upside-down, demands from regular people were gaining greater momentum, forcing governments to reimagine energy and food systems and businesses to redesign vast supply chains—in a push to get emissions to effectively zero by 2050.

Frequently, those demands have been the loudest from young people, who last September once again took to the streets worldwide in millions. But central bankers, finance ministers, and CEOs of some of the world’s largest companies have also joined the chorus of voices demanding dramatic change. Some of those voices represent remarkable turnarounds: Last week, the CEO of Royal Dutch Shell—the world’s largest publicly held oil and gas company—said it, too, would cut emissions to “net zero” by 2050.

The horror of the COVID-19 pandemic has shaken global health systems and economies. It has also overturned expectations of what the future will look like—and how, as the world reopens, businesses and communities will rebuild. That offers a chance: not just to try to turn the clock back to “business as usual,” but back to the vision set out by organizers and politicians on April 22, 1970. After all, half a century after the world marked the first Earth Day, the world is facing the prospect of not having another fifty years to wait.

Scroll below to explore the history of Earth Day through photographs.

Biologist and author Rachel Carson reads in the woods near her home in 1962. Her book Silent Spring prompted widespread alarm and spurred environmental activism.
Alfred Eisenstaedt—The LIFE Picture Collection/Getty Images
The Boston City Hall, still under construction, is almost lost in smog on Nov. 25, 1966.
J. Walter Green—AP Images
Environmental Protection Agency technicians take deep soil samples from the lawns and streets of Times Beach, Missouri for possible dioxin contamination in the water. The Water Quality Act, passed in 1965, expanded federal control over water quality.
Bettmann/Getty Images
Earthrise by Apollo 8 astronaut William Anders taken in December 1968. For the first time ever, our planet was photographed from the moon, showing just how fragile the earth really is, which gave momentum to the environmental activism movement.
Courtesy of NASA
View of hard-hatted workers as they deploy straw bales to clean up an oil spill on a beach in Santa Barbara, California in 1969. The spill, which began on January 28, was the result of a blowout on an offshore Union Oil drilling platform.
Vernon Merritt—The LIFE Picture Collection via Getty Images
The first Earth Day celebrated on April 20, 1970 in New York City. Earlier that year in January, Congress passed the National Environmental Policy Act, which meant the impact on the environment had to be considered for future legislation.
Santi Visalli—Getty Images
Beachgoers are sprayed with DDT as a new machine for distributing the insecticide is tested for the first time in 1945. DDT was later banned in 1972.
Bettmann/Getty Images
Children ride their bicycles to field trips and school during the gas crisis in the winter of 1974.
National Archives/Getty Images
President Jimmy Carter delivers his solar message to Congress in 1979, laying out his plan to get 20% of the country’s energy from renewable sources by 2020.
Bettmann/Getty Images
After reports came out that her town’s high rate of birth defects, which impacted her son, were caused from a chemical company’s toxic waste dump, Lois Gibbs holds EPA official Dr. James Lucas hostage in the Love Canal Homeowners Association building in May 1980 in New York.
Joe Traver—Liaison/Getty Images
Workers point their hoses on oiled rocks as part of the Exxon Valdez Oil spill cleanup in 1989 at McPherson Bay on Naked Island.
Erik Hill—Anchorage Daily News/Tribune News Service/Getty Images
Hundreds of people attend the Earth Show in May 1992 in Rio de Janeiro ahead of the opening of the UN conference on environment and development.
AVANIR NIKO—AFP/Getty Images
More than 1,200 students from across the U.S. assemble a five-story globe on the National Mall in Washington on Earth Day 1995.
JOYCE NALTCHAYAN—AFP via Getty Images
The Kyoto Protocol, which commits state parties to reduce greenhouse gas emissions, was signed and adopted at the COP3 of the U.N. Framework Convention on Climate in Kyoto in 1997.
Kyodo via AP Images
The 2006 documentary “An Inconvenient Truth”, which won two Academy Awards, tries to raise awareness of climate change.
Courtesy of Paramount Classics/Everett Collection
Pelicans caught in the BP oil spill wait to be cleaned at the Fort Jackson Bird Rehabilitation center, near Venice, La. on June 11, 2010.
Christopher Morris—VII/Red​ux
An aerial view of the Gulf of Mexico more than 50 miles southeast of Venice on Louisiana’s tip where an oil slick is seen as the BP Deepwater Horizon oil rig burns in 2010.
Gerald Herbert—AP Images
The ozone layer is Earth’s natural sunscreen, shielding life from excessive amounts of ultraviolet radiation. In 1979, Earth’s ozone layer was damaged near Antarctica by well-intentioned chemicals—chlorofluorocarbons, used for refrigerants and aerosol spray cans—that have the unintended consequence of destroying ozone molecules. An international treaty called the Montreal Protocol was signed in 1987 to phase out ozone-depleting chemicals.
Courtesy of NASA
People at a rally for the environment to protest against President Donald Trump’s decision to withdraw the United States from the Paris Climate Accord on June 4, 2017 in Westport, Connecticut. Signed in 2017, the Paris Agreement’s goal was to limit emissions to levels that will prevent temperatures from rising by more than 1.5 degrees Celsius by end of the century.
Spencer Platt—Getty Images
Swedish climate activist Greta Thunberg speaks at the 2019 United Nations Climate Action Summit at U.N. headquarters in New York City on Sept. 23, 2019. Thunberg’s “Fridays for Future” movement goes global, largely with protests by young people against inaction on climate change.
Carlo Allegri—REUTERS
Activists gather in John Marshall Park for the global climate strike protests on Sept. 20, 2019 in Washington D.C. In what could be the largest climate protest in history, inspired by the teenage Swedish activist Greta Thunberg, people around the world took to the streets to demand action to combat climate change.
Samuel Corum—Getty Images

—Why the coronavirus crisis could make Big Oil greener
—How Global 500 companies are responding to the coronavirus
—IEA warns of “staggering” demand drop in global oil markets
—Crude math: Why $10 oil could be worth less than nothing—Listen to Leadership Next, a Fortune podcast examining the evolving role of CEO
—WATCH: PSEG CEO on climate change action: “It should have been done yesterday”