The worst part about the U.S. losing 10 million jobs in two weeks? The real number may be much higher 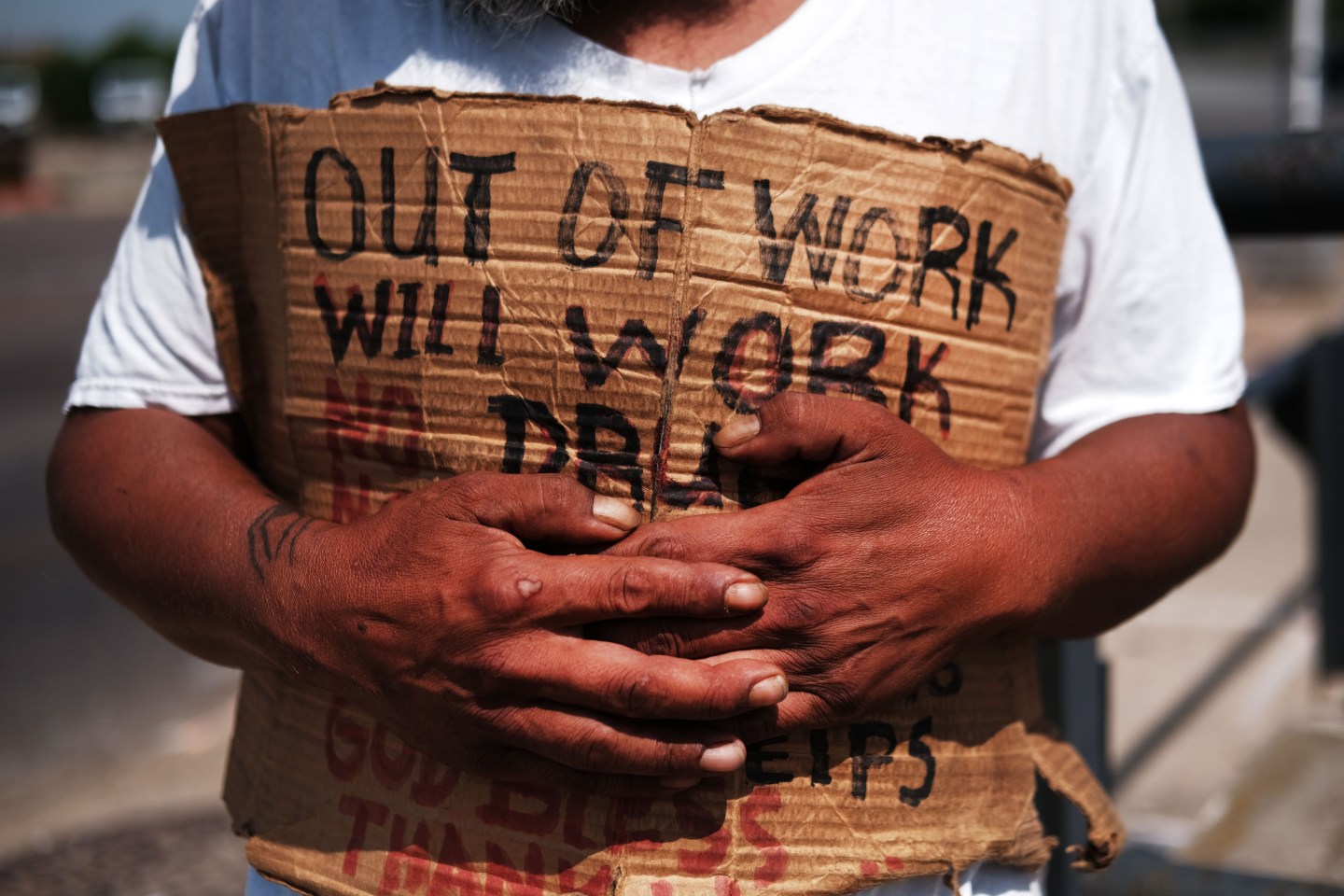 LAWRENCE, MASSACHUSETTS - AUGUST 16: George, who is homeless, panhandles along a street in Lawrence on August 16, 2019 in Lawrence, Massachusetts. Lawrence, once one of America’s great manufacturing cities with immigrants from around the world coming to work in its textile and wool processing mills, has struggled to find its economic base since the decline of manufacturing. Despite a strong national economy, Lawrence, and many mid-size American cities and towns, are struggling with persistent joblessness, an opioid epidemic and a lack of affordable housing. While Lawrence is witnessing pockets of investment, many of its residents are facing economic hardship. Currently one-third of Lawrence's children live in poverty, 36 percent of residents receive aid under the Supplemental Nutrition Assistance Program and just over 24 percent of residents live in poverty. (Photo by Spencer Platt/Getty Images)
Spencer Platt—Getty Images

Take the worst weekly unemployment numbers the U.S. has ever seen. And then double it.

More than 6.6 million Americans filed for unemployment benefits in the week ended March 28. That tops the previous all-time record of almost 3.3 million initial unemployment claims set just a week ago, according to the U.S. Department of Labor.

In a two-week period the country has lost 10 million jobs—wiping out the past four years’ worth of U.S. job gains in a period as long as one paycheck.

But the real number of Americans who lost their jobs over the past two weeks is likely much greater than 10 million. Experts say that states are overwhelmed with the number of jobless claims flooding in, and they’re unable to process all the claims, meaning the real total may be even higher.

“In some cases the [state unemployment] websites don’t have a lot of feasibility for handling this…some people who lost their jobs last week still haven’t gotten through. We’re going to continue to see a backlog growing in the system,” says Peter Earle, an economist at think tank American Institute for Economic Research (AIER).

Across the nation unemployment sites are crashing from the influx of traffic, including Michigan’s, which went down for a bit on Tuesday.

Dan White, head of fiscal policy research at Moody’s Analytics, notes that one state he works with said it was receiving about 1.5 million calls per business day, and can only field 11,000 to 12,000 calls. He declined to name the state, but said more unemployment offices this week are turning to the private sector for help.

Pennsylvania is second in the nation with 783,331 initial jobless claims over the past two weeks. That’s more than much bigger states like Texas (431,023 claims), and New York (446,402 claims). The Keystone State leads those states because it has a simple and functioning unemployment site that can handle the volume better, White says. That gap between Pennsylvania and states like New York indicates that there are likely millions of claims in the U.S. that have yet to be processed, he adds.

“Four years of job gains wiped out in 15 days…Unemployment systems are just unable to deal with it,” Earle says.

—Millions of Americans won’t be able to pay their bills this month. What financial experts advise
—Everything you need to know about the coronavirus stimulus checks
—5 things to know about unemployment benefits in the COVID-19 stimulus package
—Everything you need to know about furloughs—and what they mean for workers
—How to defer your student loan payments during the pandemic
—What to do if you’re worried about getting laid off
—Listen to Leadership Next, a Fortune podcast examining the evolving role of CEOs
—WATCH: The U.S. tax deadline was pushed back from April 15 to July 15