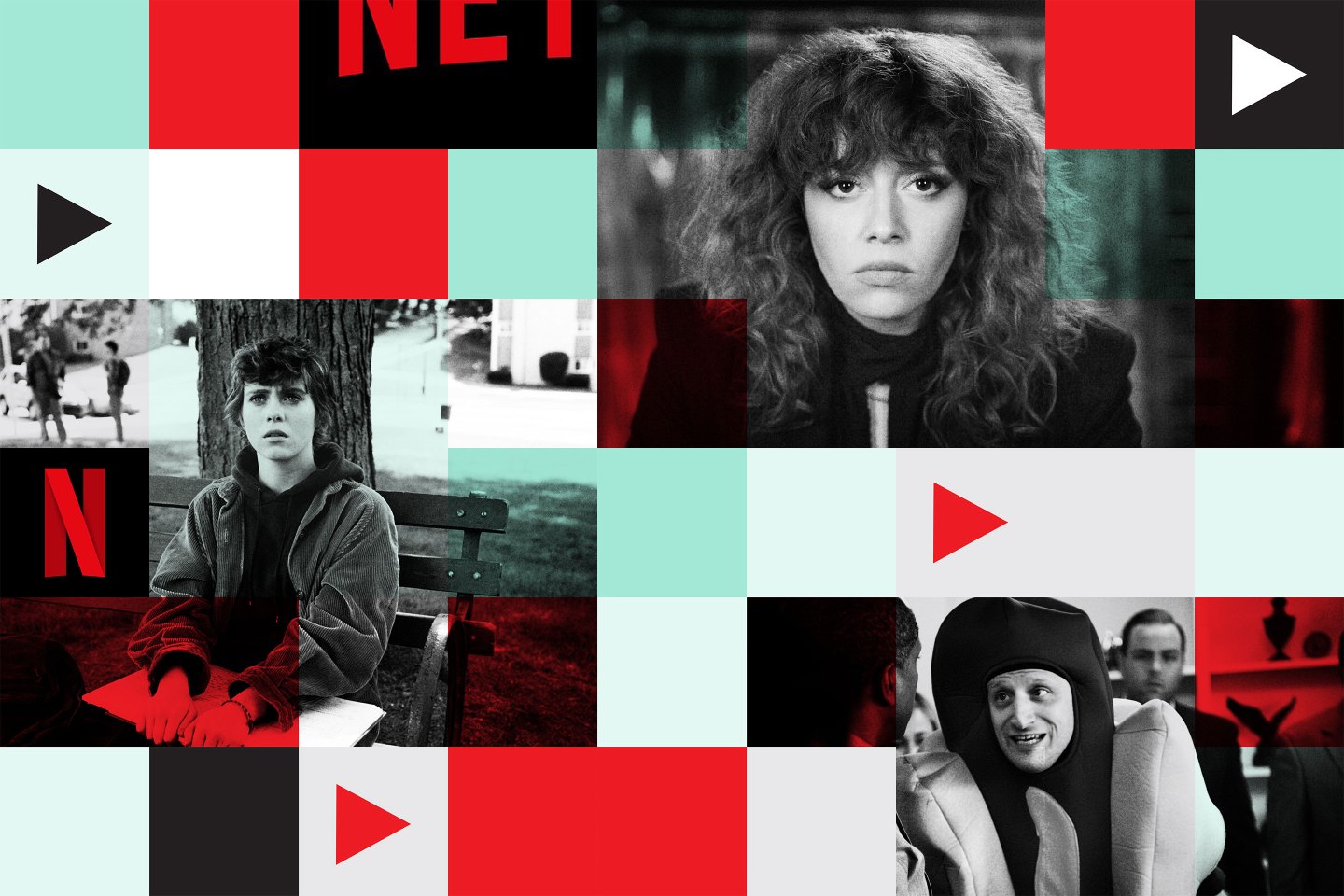 Sorting through Netflix’s back catalog can feel a bit like shopping at a superstore with only the broadest of overhead signs to guide you: disorienting, increasingly frustrating, and perhaps more trouble than it’s worth when all you’re really after are chips and salsa.

But in the time of the coronavirus, folks are wisely staying home and self-isolating in droves, leaving plenty of time to peer through streaming services’ myriad offerings in search of the perfect mid-pandemic entertainment. Fortune’s here to make that quest a little easier, breaking down the major services’ offerings into a few distinct recommendations based on whatever mood our current global crisis might have you in (all of which are completely valid).

“I Think You Should Leave With Tim Robinson” is a surreal sketch comedy that’s hard to describe.
Courtesy of Netflix

Derry Girls A gaggle of northern Irish teenagers brave the daily indignities and unusual intensities of life in the 1990s, as the Troubles draw to a tumultuous close, in this achingly funny and beautifully lived-in comedy series from showrunner Lisa McGee, which will dramatically expand your knowledge of Irish slang when it doesn’t have you in stitches. Haven’t seen it yet? Catch yourself on, pipe down, and change that.

The Other Guys Will Ferrell and Mark Wahlberg top-line this irreverent action-comedy, still writer-director Adam McKay’s best film. Come for the high-octane antics as the duo’s outmatched New York City detectives take on corrupt cops and lethal hit men while unraveling a wide-reaching conspiracy. Stay for the belly laughs, as peacocks, bushes, and Gator the Pimp all factor into one of the most punchline-laden scripts this side of Planes, Trains, and Automobiles.

I Think You Should Leave With Tim Robinson Accurately describing this surreal sketch-comedy series is a nigh impossible feat, given how scrupulously it defies definition. Suffice it to say no other series on Netflix is as bizarrely excellent (and excellently bizarre) at delivering memorable, highly meme-able sketch comedy characters, from an absurd game-show mascot named Chunky to that car focus-group guy (“Who’s popular now, Paul?”) with all the good car ideas.

For the best stuff you missed last year:

“Russian Doll” follows a woman named Nadia (Natasha Lyonne) on her journey as the guest of honor at a seemingly inescapable party one night in New York City.
Courtesy of Netflix

Russian Doll (one season) Natasha Lyonne is spectacular in in this unexpectedly delightful riff on Groundhog Day, about a smart-mouthed New Yorker who finds herself inexplicably dying each night and resetting to the same moment at her 36th birthday party. It walks a tricky tonal tightrope, balancing melancholy with hard-hitting laughs, and manages the feat with remarkable skill.

I Lost My Body This French animated gem follows a severed hand that comes to life and, surreptitiously, makes its way across Paris and back to its owner. Beautifully rendered in service of a story that’s as strange as it is ultimately soul-affirming, I Lost My Body pushes the boundaries of both animated and philosophical storytelling.

The Umbrella Academy (one season) Who knew the best fix for superhero fatigue could emerge from the genre itself? My Chemical Romance’s Gerard Way is the driving force behind this hyper-stylized adaptation of his punchy, peculiar comic about a dysfunctional family of superpowered individuals born suddenly, in the same moment, to women who’d previously shown no signs of being pregnant. In adulthood, the siblings (played by the likes of Ellen Page, Tom Hopper, and Robert Sheehan) drift to different corners of the world, but when they reconvene for the funeral of the eccentric billionaire who adopted and raised them, a time-traveler from the future alerts them that they have a few days to prevent the apocalypse.

Breaking Bad What better time than a quarantine to go back to the beginning of one of TV’s greatest all-time triumphs? If you’ve already witnessed the rise and fall of Walter White, everyone’s favorite high school teacher turned meth kingpin, few series were as elegantly, ingeniously crafted—from beginning to end—in such a way as to reward repeat viewings. And if you’re new to Breaking Bad, fasten your seat belts. It’s going to be a bumpy ride.

I Am Not Okay With This Toss most of the recent Netflix originals you love (Stranger Things, The End of the F—ing World, Chilling Adventures of Sabrina, and Sex Education) into a blender with Stephen King’s Carrie, and you’re somewhere close to this supernaturally tinged coming-of-age tale starring two of the It kids: Sophia Lillis and Wyatt Oleff.

The Vampire Diaries Eight seasons of one of the CW’s trademark supernatural soaps might honestly be just what the doctor ordered. And you couldn’t do better than this surprisingly sprawling, always-engrossing saga of grief-stricken teenager Elena Gilbert (Nina Dobrev) and the two bloodsucking brothers (Paul Wesley and Ian Somerhalder) she grew to love and hate as they joined forces against all manner of otherworldly evils plaguing the perfectly named town of Mystic Falls.

Spider-Man: Into the Spider-Verse Thrilling, funny, soul-nourishing, and visually astounding, this animated caper is the wall-crawler’s finest outing, bar none. Half its brilliance is structural, with over 100 animators working to pull off its groundbreaking, computer-meets-hand-drawn look, and the other half comes from a story that innately gets the balance of heart and humor that’s always made Spider-Man so super.

The Good Place We need a show like The Good Place. Warm and thoughtful and effervescently optimistic about human nature, this critically adored comedy from Mike Schur started in a very funny place, as a group of strangers in the afterlife contemplated their new reality. But over its four-season run, the show became something far richer and more vital: a rousing, existential defense of the individual’s capacity for change, and a thoroughly timely look at how we humans can better ourselves, each other, and the world—just so long as we make the effort.

John Mulaney & the Sack Lunch Bunch An endearingly off-kilter next move for the millennial-fave comedian after his trio of eminently quotable stand-up sets (New in Town, The Comeback Kid, and Kid Gorgeous—all also on Netflix), this children’s musical comedy special riffs on ’70s staples like Sesame Street by pairing Mulaney with 15 kids between the ages of 8 to 13. But straight-up parody this is not. Through all manner of insane musical numbers (“I Saw a White Lady Standing on the Street Just Sobbing [and I Think About It Once a Week]”), ridiculous guest appearances (Jake Gyllenhaal as a deranged Music Man), and impressively abstract thought-trains (about everything from death to parenting to death again), Sack Lunch Bunch keeps its tongue firmly in cheek without sacrificing its earnest tenor.

For thrills and chills:

Good Time Before bringing Adam Sandler the best reviews of his career in their superlative Uncut Gems, Josh and Benny Safdie perform similar career resuscitation on then-Twilight alum Robert Pattinson. This scuzzy, neon-soaked odyssey through New York City’s criminal underbelly is one of the most stressful thrillers of recent years—and Pattinson, as a truly detestable thief out to spring his mentally handicapped brother from prison after a botched bank robbery, is unnervingly great as its immoral center.

Black Mirror You’ve likely seen a few installments of this anthology series, a chilling and very occasionally hopeful collection of techno-paranoiac parables. But what better time to fill in the blanks by catching early episodes (like “The Entire History of You,” starring Toby Kebbell and Jodie Whittaker as a couple replaying their memories thanks to a brain implant that records everything) and making time for the less universally acclaimed outings (like “Metalhead,” a robo-pocalypse romp with a timely through line about how far we’ll go for small joys in super-dark times).

The Blackcoat’s Daughter A holy trinity of young actresses—Emma Roberts, Kiernan Shipka, and Lucy Boynton—star in this chilly, hair-raising psychological horror gem from writer-director Oz Perkins (Gretel & Hansel), about two Catholic schoolgirls left behind at school over a holiday break, only for a demonic presence to make itself known.

—Filmmakers must make a choice as the coronavirus forces festivals online
—How Harvey Weinstein’s sentencing could change the entertainment industry
—As the coronavirus spreads, is this weekend’s historically low box office Hollywood’s new normal?
—Don Cheadle on Black Monday, Wall Street in the Trump era, and hope about the climate change fight
—How Netflix’s Lost Girls upends the conventions of serial killer movies
Follow Fortune on Flipboard to stay up-to-date on the latest news and analysis.