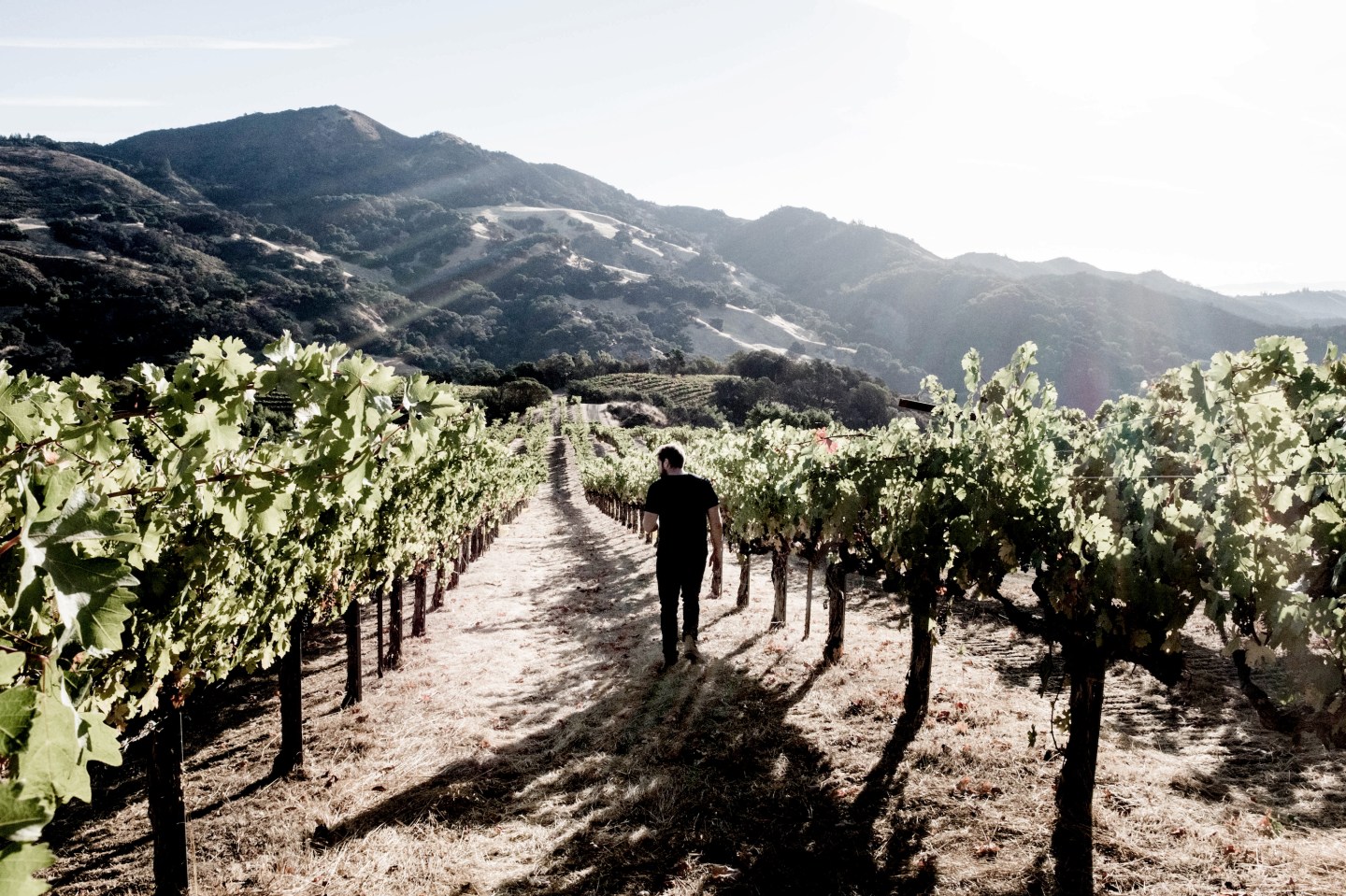 Winemaker Thomas Comme in the steep vineyard of Pym-Rae.
Courtesy of Pym-Rae

Napa, with its reputation for growing superlative Bordeaux grape varieties, has long piqued the interest of international winemakers. In recent years, a slew of investments from French chateau owners—Chateau Latour owner François Pinault’s purchase of Araujo Estate, and the sale of St. Supéry to Alain and Gerard Wertheimer of Rauzan-Segla and Canon, for example—show how this slice of California has captured the world’s attention.

Expansion plans for the venerable Bordeaux estate began several years ago by Alfred Tesseron, the third generation of the family to oversee Pontet-Canet. “We wanted a new project, something new to invest in,” says Justine Tesseron, Alfred’s daughter. “I think each generation is into something new. We really wanted a new challenge.”

Their Goldilocks-like search—Bordeaux was too expensive, Burgundy was too small, and Italy didn’t feel like a fit culturally—eventually led them to California. Alfred previously worked in the U.S selling wine; an original stint of six months turned into six years, so the U.S. was familiar territory to the family. Although it wasn’t said explicitly, Napa’s stable climate has long been a draw for winemakers. Nowadays, with rising climactic temperatures creating uncertainty in Bordeaux vineyards, its appeal is even greater. Armed with their knowledge of biodynamic farming, the Tesserons knew their practices would most likely translate successfully to U.S. soil.

While on vacation, the family received a call from Jean-Michel Comme, Pontet-Canet’s winemaker of 30 years who was aiding in the search. Comme proposed a property that on paper didn’t fit the criteria—a small vineyard footprint with a large house—but his investigations into the soils and site exposition led him to believe the property had potential.

The vineyards were planted in 1990 by Robin Williams. The Hollywood actor never produced wine himself and instead sold off the grapes. Comme found a combination of sedimentary and limestone soils, coupled with the high elevation of the two plots (1,640 feet and 1,968 feet), brought freshness to the wines. In addition, a corridor to the Pacific allows cold oceanic air to flow to the vineyards, which tempers the heat from the sun.

Vine age was another selling point for the family. It’s generally regarded that older vines produce more complex fruit, and at 25 years old, the Pym-Rae vines were coming into their own. Although yields decrease as vines age, “having this age is very important because the grapes start to have full concentration,” Tesseron says.

In 2016 the Tesserons bought the property and kept the name Pym-Rae as an homage to the previous owner. (“Pym” and “Rae” are the middle names of Williams’s children.) Jean-Michel Comme’s son, Thomas, moved from France to become the estate manager. Drawing from their farming practices at Pontet-Canet, they immediately began converting the property to biodynamic farming, in 2019 becoming Demeter-certified—a process used in more than 50 countries to denote meeting international standards for biodynamic agriculture. They stopped irrigation and introduced dry farming—where vines learn to grow with water provided from natural rainfall—and brought in cows to serve as lawn mowers (not to mention fertilizer producers) during the winter months.

Fog keeps temperatures cool, allowing for slow and even ripening of grapes.
Courtesy of Pym-Rae

As at the family’s Bordeaux estate, wine is fermented in concrete vats shipped over from the Medoc, then aged partially in French oak and partially in concrete, a regimen they implemented at Pontet-Canet starting with the 2012 vintage. “Too much oak was like too much makeup,” Tesseron explains. “The idea is to really feel that purity of fruit, to feel the freshness, the elegance given by the vineyard.” The 2016 inaugural vintage is a traditional Bordeaux cépage of 76% Cabernet Sauvignon, 17% Merlot, and 7% Cabernet Franc. Initial production is small—approximately only 10,000 bottles were made—and it retails for roughly $350.

Pym-Rae and Pontet-Canet could almost be considered cousins: same family, same philosophy, and same goal—but “it’s two different wines,” Tesseron says. “We learned some things in Pontet-Canet that are working that we want to bring to Napa, but it’s different climates, different temperatures, different atmosphere; that’s why it’s hard to compare them.”