Can’t choose a cocktail? Let the divine decide at this Victorian-era London hotel 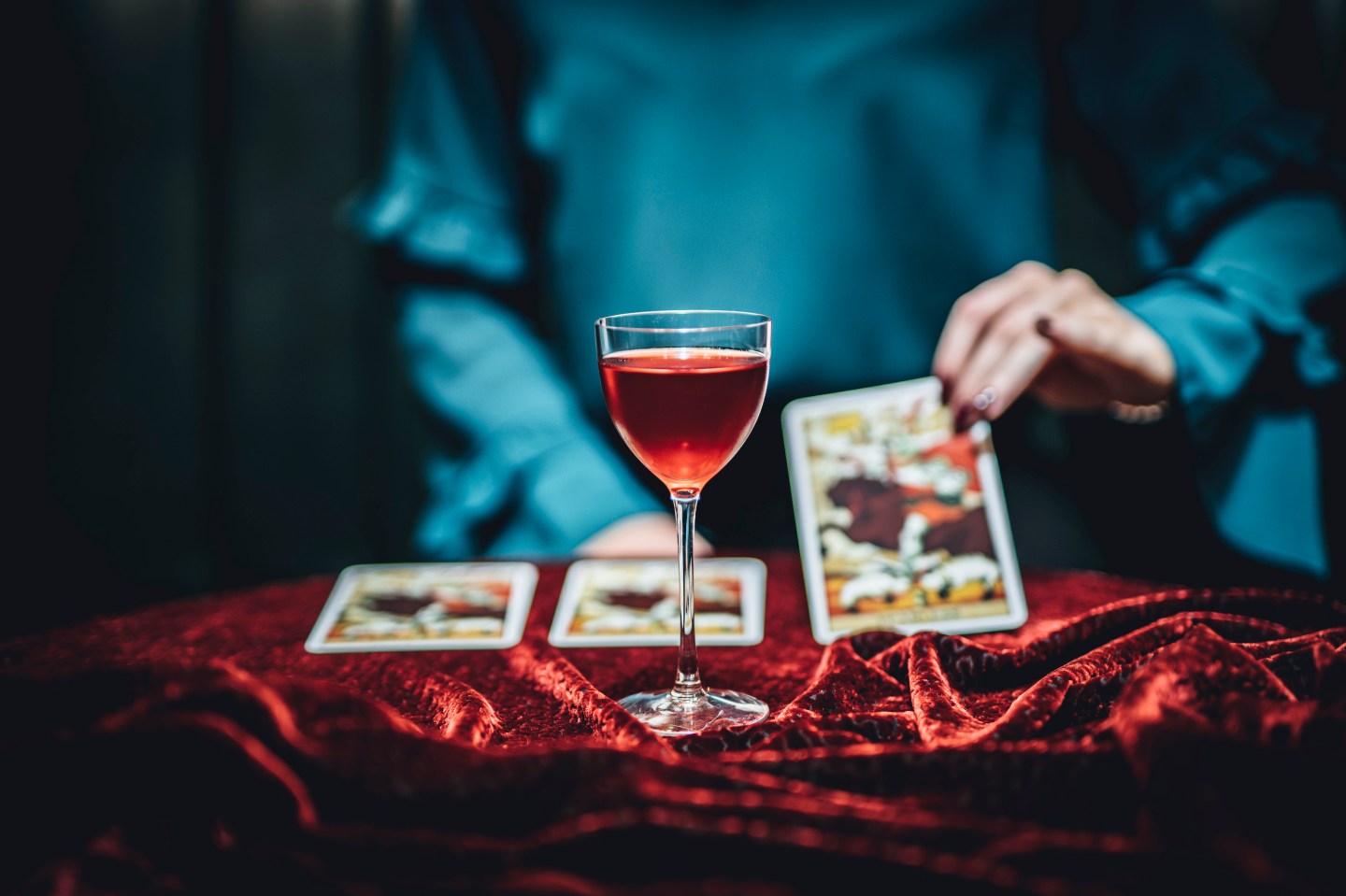 If the Bloomsbury Club's "Cocktail Diviner" lands on the "Dreamy" card, get ready to "leave the realm of dreams and enter a productive reality with the Mirror Image cocktail featuring Mount Gay XO rum, beeswax-infused Rémy Martin, green chartreuse, absinthe, and blackberry tincture.
Courtesy of The Bloomsbury Hotel London

And then there are those patrons who don’t know what they like. Or, maybe, they like everything. For these guests, London’s Bloomsbury Club calls on the “Cocktail Diviner.” But who is the Cocktail Diviner, and how will he or she determine one’s drink du jour? With a touch of the finger and an open mind.

On a grey and gloomy day last month, my mind was receptive—but definitely skewing blue. So when I sat down in the swanky lower level bar of the Bloomsbury Hotel and picked up the menu, which is modeled after a set of tarot cards designed in 1910 by a Bohemian occultist, I immediately gravitated towards the “Melancholic” card featuring a woman staring out a window at windblown cypress trees. The vodka-based drink, dubbed the “Persian Mist” and concocted to represent this emotive state, featured a mixture of delightful sounding ingredients including East India cream sherry, Indonesian coffee, and Persian Damask rose blossom. What’s more, the “effect” listed on the back states rose blossom will “soothe anxieties and lift the spirits.”

Flip through the Bloomsbury Club’s tarot card cocktail menu to find drinks such as the Forbidden Fruit made with gin, crab apple cordial, green chartreuse, Bramley and Braeburn apples. and apple oil.
Courtesy of The Bloomsbury Hotel London

But then a waiter rolled over a bodiless, turban-wearing head inside a glass box that resembled Zoltar from the movie Big—minus the goatee and torso. This was the Cocktail Diviner and he was about to instruct me otherwise.

“We wanted to try and connect drinks to an emotion, but we said, ‘How are we going to measure how we’re feeling?” says Bloomsbury Club manager Scott Gavin, who conceptualized the new menu, which debuted in November. “Then I thought it could be based on body temperature like a mood ring.”

Gavin instructed me to place my forefinger on a button, which caused the eyes of Zoltar’s cousin to flash red. When they stopped, the eyes landed on the “Secretive” card, which corresponds to a drink dubbed the “Bete Noire” made of tequila, orange liqueur, pomegranate kombucha, two different types of sherbet, and Hawaiian black salt. I skeptically turned up my nose. I was not feeling secretive.

Yet, despite my distaste for tequila, the effect of the salt appealed to me: Blackened with activated charcoal in an ancient Ayurvedic practice, it’s meant to trap and expel negative energies. What’s more, the pomegranate will “invigorate” while the kombucha promises to “repair and protect.”

Take a seat at the bar or get cozy in one of the many booths to summon the Bloomsbury Club’s “Cocktail Diviner” when choosing your poison.
Courtesy of The Bloomsbury Hotel London

Like me, Gavin says most guests are receptive to whatever the Diviner divines—even if, also like me, they may not favor some of the components in the suggested drink or aren’t necessarily experiencing the disposition declared. (Those mood rings and Magic 8 Balls were always just slightly off!)

“People generally choose the drink that it lands on because it’s an experience,” he says. “Our drinks are not complicated. They’re made of ingredients that everyone knows and they can understand the flavor composition.”

That said, they’re also not necessarily scientifically sound or based on real psychology. In fact, the whole tongue-in-cheek concept was created as an homage to London’s “Bloomsbury Set” who, in the aftermath of the First World War, sought answers from the Great Beyond via séances, palmistry, magicians, and mind-riders. After finding this original set of tarot cards, Gavin decided to recreate them as a drink menu beginning with 14 drink profiles. Then, he turned to design firm Rivington Bye to help match the drinks with a variety of emotions, which were then artfully illustrated by London-based illustrator Sophie Glover. Finally, the team came up with natural, well-known effects that one or two of the cocktail’s components might elicit.

Whether or not you consulted the “Cocktail Diviner” and landed on the “Obsessive” card, its corresponding drink dubbed the Black Narcissus will “prevent passion from turning to obsession” thanks to passion fruit extract mixed with rum, vermouth, kumquat liqueur, and grenadine.
Courtesy of The Bloomsbury Hotel London

“It’s an ice breaker,” Gavin says of the Diviner. “Not only between the server and the guest, but between the guests themselves. It inspires banter, a discussion, and a memory, which in this day and age is needed.”

So whether you’re feeling more “Melancholic” than “Secretive,” or just want to tap into your “Blissful” or Mischievous” side, there’s a sip out there to suit your every desire—even those you didn’t know you had.