‘Awkwafina Is Nora From Queens’ team: Asian-American representation is not a ‘fad’ 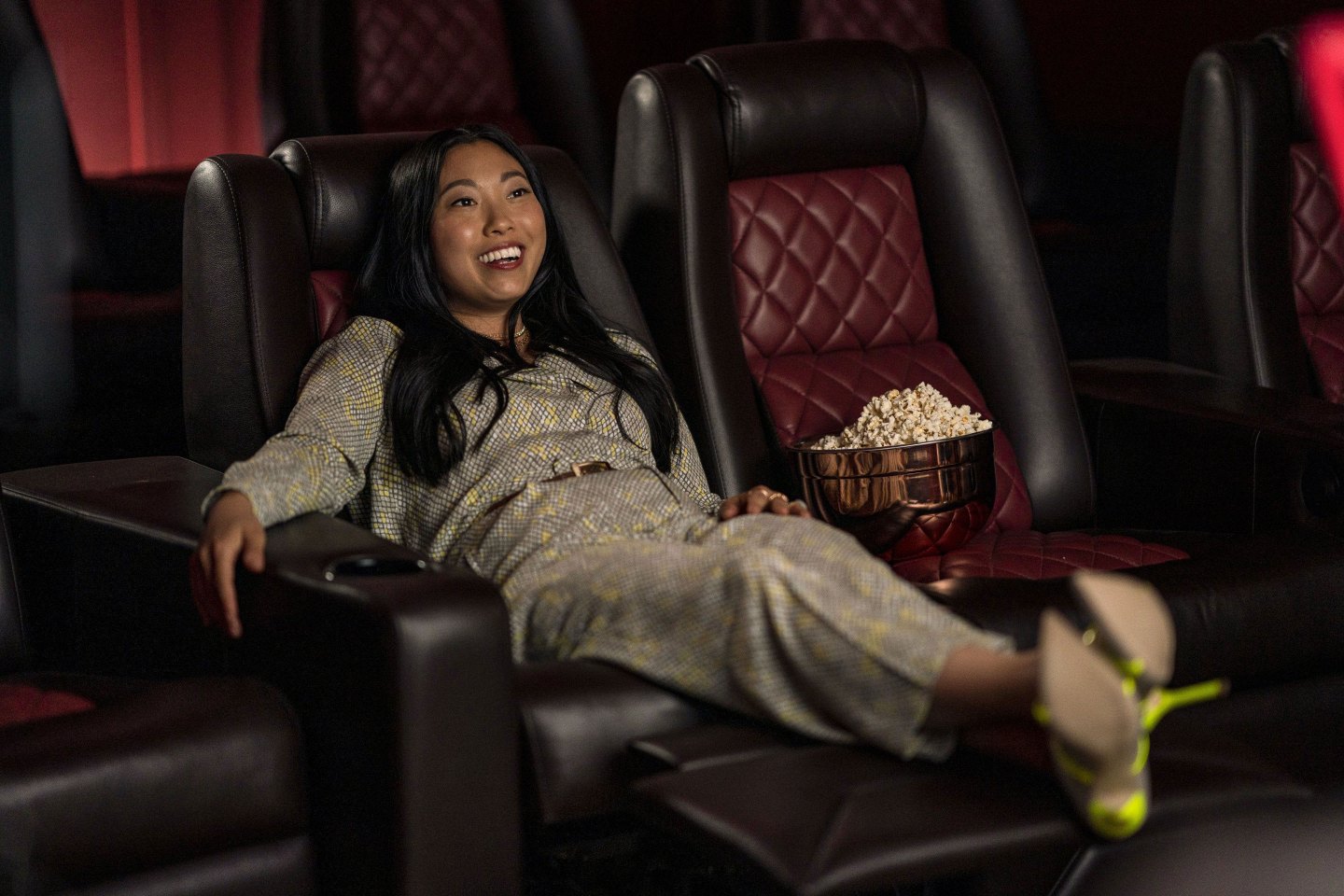 Before she arrived in Hollywood as a triple threat with impeccable instincts, equally dexterous with rhymes, punch lines, and dramatic monologues, Awkwafina was just another New Yorker scrapping her way through the week.

More specifically, she was Nora Lum, from Queens. Awkwafina Is Nora From Queens (premiering Wednesday at 10:30 p.m. ET on Comedy Central) lets the comic dynamo loose on a fictionalized retelling of her experiences as a twentysomething trying to figure it all out. Surreal and star-studded, the series features BD Wong as her wry, warm father and Lori Tan Chinn as her feisty grandmother, with Saturday Night Live’s Bowen Yang playing her snooty, tech-bro cousin. And, of course, at the show’s core is Awkwafina, as Nora Lin, a small tweak that choreographs a pattern of tinkering with Lum’s real history just so.

“The show features an all Asian-American lead cast, it’s by Asian-American creators, and we’re telling an Asian-American story,” says writer and executive producer Teresa Hsiao, speaking by phone. “But we think it’s a universal story as well.”

Indeed, throughout its first five episodes, Awkwafina Is Nora From Queens makes the case for itself as an heir apparent to Broad City (the two series share executive producer Lucia Aniello). As played by Awkwafina—who recently won a Golden Globe for The Farewell—Nora is an evolution of the stoner-slacker gal archetype Broad City helped popularize: a scheming, bong-hitting, hard-shrugging twentysomething overflowing with existential dread. Crucially, Nora’s status as a second-generation Asian-American woman, still living at home as an adult in a multigenerational household, lends a cultural context to her specific sense of aimlessness.

“Real life doesn’t have ad breaks,” explains Aniello. “At the end of the day, it’s really about this nuclear family, based on hers, and how they help each other. It’s also the failings of a twentysomething stoner, that’s based in truth. The stories along the way get stretched a bit, but that’s just good TV.”

Though Aniello and Hsiao note that they were deeply conscious of how few TV comedies have focused on Asian-American characters, they say Lum was never out to capture the reality of the entire Asian-American experience—just her own.

“We take on that responsibility of representation really seriously, but at the same time we want to write a show that’s fun and authentic to her experience,” explains Hsiao. “Just by existing as a show, we’re breaking barriers, and we’re so grateful to be able to showcase an Asian-American experience that perhaps we haven’t seen before.”

No one involved with Awkwafina Is Nora From Queens ever wanted the series to be “the Asian show,” adds Hsiao, citing All-American Girl and Fresh Off the Boat as two influences beside which their series stands. “We want to be one of many.”

Given that Comedy Central has already handed down a second-season renewal for the series, it will certainly last longer than the one-and-done All-American Girl. But with Fresh Off the Boat now winding down its sixth and final season, the timing of Awkwafina Is Nora From Queens couldn’t be better.

Hsiao brings up a time she was on a TV writers’ panel and faced a question from an audience member who asked whether on-screen representation was a “fad” that might ebb in popularity after a few years.

“Asian-Americans, it’s not like we’re high-waisted jeans or something,” she says, laughing. “We’re not going to all of a sudden disappear from store shelves. But I do think there is an appetite for more Asian-American stories, and should be. There’s really been a dearth of stories from all people of color, of diversity in film.”

To craft Awkwafina Is Nora From Queens, which began taking shape four years ago as Lum discussed starring in her own series with Comedy Central, the actress turned first to Hsiao, a Harvard-educated TV writer who was at the time working on Seth MacFarlane’s Family Guy and American Dad! at Fox.

After meeting in person for a meal in K-Town, Los Angeles, the pair spent many months passing drafts back and forth, trying to zero in on what the show could be. Hsiao had been familiar with Lum’s rapping, especially the “My Vag” song for which she went viral in 2012. “I always knew she was funny,” recalls Hsiao. “I was impressed in meeting her by how she was so genuine, by her being a really smart, thoughtful person.”

There was precedence, real and creative, for the pair’s eventual decision to characterize Nora Lum as an anxious millennial, burned out and in the passenger seat of her own life. Lum has talked in the past about the schism between her real-life personality and Awkwafina, a stage name she adopted at 16, and whom she’s described as a repressed side of herself.

“Awkwafina is big and brash,” she explained when interviewed for a New Yorker profile back in 2018. “She’s the person who says whatever’s on her mind. But she also hasn’t grown up or thought about consequences. Nora is the person who is neurotic and overthinks.” (Lum, considered to be among the major snubs for an Oscar nomination this year, was unavailable to comment for this article.)

Awkwafina, as pictured in “Awkwafina Is Nora From Queens,” has previously described her stage persona as “big and brash.”
Zach Dilgard—Comedy Central

In filling out the cast around her, Lum was open and sometimes vulnerable about her family life. Wong as her father is based on her own, while her real-life grandmother is sometimes just as much a spitfire as the show’s sharp-tongued, off-the-wall octogenarian.

“All its elements are based somewhat in reality, but we go a little bit past what actually happened to her, for the show,” explains Hsiao. “It’s very easy when you’ve got someone there so open and authentic to her own character. It’s easy to mine her for stories.”

A big moment for Awkwafina Is Nora From Queens came when Aniello boarded as an executive producer. Writing duties for the pilot were split between Hsiao, Lum, and Karey Dornetto, all of whom are also executive producers.

Compared with Broad City, five seasons of which she worked on to script some of the show’s funniest story lines, Aniello is less involved in the writing side of Nora From Queens. But as an established showrunner, and a white woman, she says she served mostly as a stamp of approval, signing off on decisions that the other less well-known creatives might have had trouble pushing through at Comedy Central.

“I’m a little bit less there, less ‘Here’s the story we’re telling’ and more helping a vision come to life,” says Aniello. “It’s a different job on this one, but that’s important, because this isn’t really my story to tell. It’s exciting for me to say, ‘This is a skill set I have. How can I use it to help you?’”

Sometimes, that meant pushing for a specific scene to remain exactly as the show’s Asian-American writing staff had written it, even if the network gave notes back suggesting changes. At other points, it simply meant getting out of the way.

“I’m first-generation American, and in some ways it’s so easy for me to say, ‘I have this experience that’s first-generation, so I can relate to a story of people who are newish to America,’” explains Aniello.

“It’s like, ‘I get it. This is my grandmother’s story, too.’ And what I learned is that it’s really not. If I might have a parallel experience, its just completely different from culture to culture. It’s their story. My anecdote might be interesting, but it also might not be, and so it’s really about stopping, listening, knowing it’s not my story to tell, and figuring out how to capture it in the most captivating, interesting way. This is her story. It’s her family’s story. And that’s all it should be.”

All in the family

Lum, Hsiao, and the other writers didn’t need much guidance in turning Nora’s life experience into network comedy, according to Aniello. “Nora’s sensibility is so unique, specific, cool, and unexpected,” says Aniello. “You really don’t know what she’s going to say next.”

That energy made for an improvisation-heavy set, in which Lum would pepper her costars with lines, each more ridiculous than the last, until one sticks. Aniello sees Lum’s comic timing, and the “alchemy” she established with her costars, as key to the series’ success.

One key player in Awkwafina Is Nora From Queens is BD Wong, a veteran character actor who brings depth and wry humor to his portrayal of Nora’s father.

Reached by phone, Wong told Fortune that he knew early on that the series would be a very different experience from his past TV gigs, whether on the evergreen Law & Order franchise or USA’s Mr. Robot.

“The show has this unbridled energy,” he says. “That lack of control creates a freedom and an energy that serves it very well. It’s just full of everyone’s best ideas.”

Two-thirds of the crew’s department heads were women, and people of color were installed at all levels of the production. “Even with the classiest Asian actors on the classiest shows, there’s still a lot of non-Asian energy supporting that actor,” explains Wong. “This is not that. It’s so much more organic. There’s so much Asian and female energy.”

Wong, who’s been acting for over 30 years, says that watching a wealth of Asian-American talent come together for Awkwafina Is Nora From Queens feels like a watershed moment for small-screen representation.

“Someone would argue, ‘Just because they’re Asian, that doesn’t mean they necessarily have anything to offer,’” he continues. “They need to prove themselves as a writer on five years of such and such show; do this before doing that. With this, we start with, ‘They’re Asian.’”

Wong clarifies that all those working on the series proved they belonged there through the strength of their work. “But prior to this, there was always this sensibility that it’s hard to find Asians, that they don’t go into the industry because their parents don’t let them,” he explains. “All these excuses perpetuate the misconception that we need help.”

The Tony winner has worked in blockbusters and smaller films, in TV shows and on Broadway. But seeing the Asian-American excellence on display across Awkwafina Is Nora From Queens felt to him like a wake-up call—and a triumphant debunking of that misconception.

“You buy into this conventional wisdom and get stuck in it,” says Wong. “You stay there until someone shakes you and pushes you out of the car while it’s moving.”

Promoting diversity at all levels of a production, as Awkwafina Is Nora From Queens does, has a way of opening the eyes of those involved, he adds. “All change happens because somebody lies in front of the train and points an arrow to the problem,” he says. “There’s exclusion people don’t even realize is happening. But once you see it the other way, you never want to go back.”

—Parasite director Bong Joon Ho dissects his tale of two families
—The History channel’s aliens and UFOs content continues to blossom as Project Blue Book returns
—What does Parasite’s best ensemble win at SAG mean for Oscar?
—Phoebe Waller-Bridge and Fleabag cast reflect on love, religion, and saying goodbye
—These Oscar Best Picture nominees are “problematic,” but will that matter?
Follow Fortune on Flipboard to stay up-to-date on the latest news and analysis.