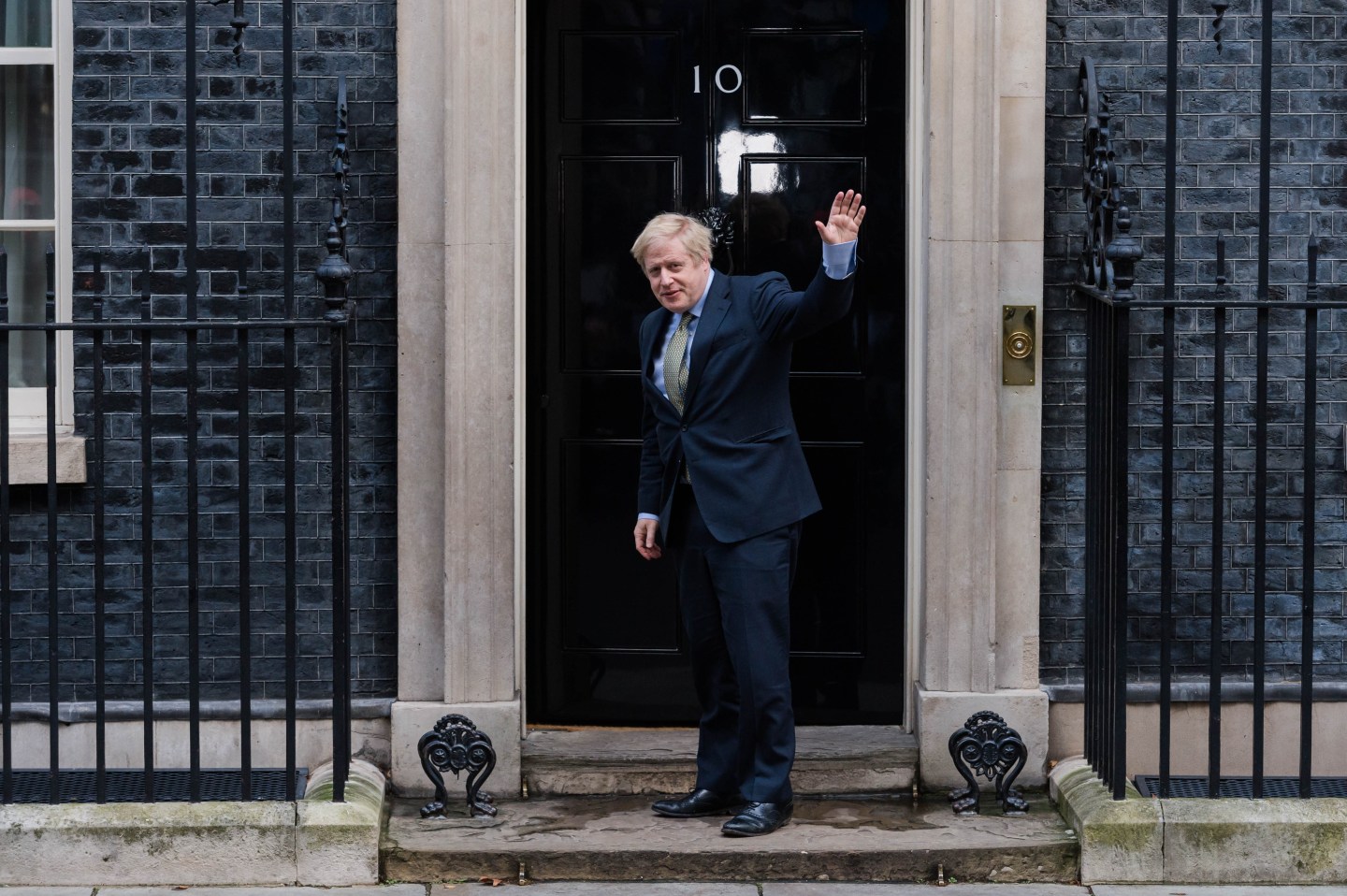 Through a discreetly marked doorway in the east London neighborhood of Shoreditch, a small group of volunteers gathered Thursday, prepared for a long night facing down a daunting and often unglamorous challenge: update Wikipedia, and do it fast.

The occasion was the U.K. general election—the third in five years—a grimly anticipated referendum on Prime Minister Boris Johnson’s approach to pushing the country out of the EU, more than three years after the Brexit referendum.

It would prove to be a historic event, sweeping Johnson’s Conservative party into a majority government, and a scouring indictment of Jeremy Corbyn as leader of the Labour party, which would mark its worst election loss in decades.

But all of that would come later. Just before 8 p.m., roughly eight editors, all but one veterans of previous election-night editing marathons, converged in an upstairs room in Newspeak House, a live-in centre for technology and media, with laptops at the ready, while a TV screen mounted on the wall was tuned to the BBC.

John Lubbock (Wikipedia articles: the Penelope Project; the British Kebab Awards), the communications coordinator for the charity Wikimedia UK, which was putting on the “editathon” for the second election running, laid out the night’s strategy for the other editors. Tables had already been prepared listing candidates highly likely to win a seat that night based on past election results, and drafts of those biographies were to be written first.

It was impossible to predict when the night might end—U.K. vote counts typically go until the early morning hours, with tallies read out, live on television, as candidates stand on stage wearing rosettes in their party colors.

John Lubbock from Wikimedia watches the election results on December 12, 2019, during a Wikipedia ‘editathon’ in east London.
Katherine Dunn—Fortune

The editathon had brought together a mix of generalists and specialists. Near the front of the room, Andrew Davidson, a retired IT manager (articles: ‘Corbynmania’; a page on Boris Johnson’s dog Dilyn), noted that he didn’t create only political posts; he was also the author of a page detailing the famously ugly/cute Damascus Goat. (“2018 [was] a big year for goats on Wikipedia,” he noted. This year, “Greta Thunberg is big.”)

In the back corner, Eva Pascoe (articles: Lisa Cameron; Stephanie Peacock), an industry advisor to Middlesex University, was leading the charge on biographies of potential female MPs—a specialty.

One of her protégés, Karolina Janicka, who works at a web management company (articles: the North London Literary Festival; Holly Brockwell) and specializes in creating entries for feminist figures and journalists, sat to her right, prepping biographies for female MPs.

While Pascoe had begun editing Wikipedia in her native Polish, she quickly saw the need for more information about notable women on the English pages, too.

“I didn’t create a page for a long time because I was a shy Wikipedian,” she explained. She said her work now focuses on editing, what she calls “more farming than hunting.”

Wikipedia has always come with its own challenges—for one, well-known commenters occasionally get death threats, said Geni, an industrial chemist (Grand Union Canal; Citizens for Undead Rights and Equality), who gave only his editor handle, citing those threats. But making sure the site’s election results are accurate has also brought new frustrations in recent years.

The largest one is the “collapse” of local media, said Andrew Grey, a librarian at University College London (first edit: a correction in the article for ‘human’). While local media sources used to provide a reliable vault of credible, published information of even fairly obscure new MPs, the closure of many local media outlets has meant that those details have become much more sparse.

“A lot of [the] time when someone’s elected to office we don’t know much about them,” said Gray. “We know, like, they’re a lawyer.”

At 10 p.m., the results of the exit poll arrived, predicting a majority government for the Conservatives and a ‘blood bath’ for Labour.

“Ouch!” someone yelled. There was a long silence.

“I am surprised, I have to say,” said Pascoe. She had expected that many of the new Labour MPs from the last election—”good, unflashy MPs”—would hold their ground on the back of local support.

Lubbock turned the screen from the BBC to a live YouTube feed from Novara Media, a website backed by Labour supporters who feel the mainstream media has not represented the party fairly, to see “how they’re taking it,” he said. When asked if Novara would qualify as a source for a Wikipedia entry, Lubbock directed the question to the room.

“Don’t even think about it!” shouted Pascoe.

“These people would tell you the sky is red,” said Grey.

Karolina Janicka (left); Eva Pascoe (centre); and Denisa Moise (right) work on Wikipedia biographies for new female MPs. To be a woman MP, “I think you have to be a fighter,” Pascoe said.
Katherine Dunn—Fortune

Meanwhile, Davidson had directed his attentions to a feel-good theme: creating the page for Dogs at Polling Stations—a viral phenomenon where, yes, people photograph cute dogs outside polling stations. On these evenings, “I always like to get something done,” he said. “Never mind Brexit. Get ‘dogs at polling stations’ done.”

As the clock turned past midnight and the new Conservative MPs began to emerge thick and fast, the banter died away as the editors hunkered closer to their screens.

“If I had to describe ‘Wikipedia elections’, I would describe it as ‘boring but worthy,’” Geni said, updating pages with the final vote tallies for constituencies.

Asked if he would ever write a page for someone he didn’t personally agree with, he retorted, “If you wanted to protect a person, you would prevent them from having a Wikipedia page!”

Meanwhile, Denisa Moise, a third-year student at Middlesex University from Romania and the one true rookie on the team, was working on a draft of her very first article: a biography of the new Labour MP Kate Osborne.

“It’s not complicated,” she said, admiring her work. She had arrived in London a year after the Brexit referendum, and planned to stay after she graduated.

But like everyone else she knew, Moise said she found the situation in the U.K. complicated—and confusing.

“Everything’s going to change,” she said. “But nobody knows how.”

By half past one, the group’s mood had shifted into one of grim endurance.

“It’s a bit slow going at the moment,” said Pascoe, having changed into a festive Christmas sweater bedazzled with a reindeer. The trays of mince pies she had brought along had long since been demolished.

“There’s loads more people we can do,” said Lubbock, just after 2 a.m. “It depends how long we want to carry on.”

“For obvious reasons, it has to be mostly Tories,” Grey said.

Between 3 and 4 a.m., editing stopped for brief periods to watch the results for the party leaders. Jeremy Corbyn announced that he would not lead his party through another General Election; Boris Johnson kept his own seat in northeast London (demolishing challengers in the form of the Labour party, a man dressed in an Elmo suit, and another who went on the ballot as “Count Buckethead”); and Jo Swinson, leader of the Liberal Democrats, lost her seat to the Scottish National Party, drawing on-air fist-pumping from SNP head Nicola Sturgeon.

The crowd thinned out, and Pascoe, Janicka, and Moise headed home. Pascoe had preemptively taken Friday morning off, as had Janicka, “either for celebration or for crying.”

Meanwhile, the Conservative surge—which had broken into Labour’s traditional ‘red wall’ heartland in the midlands and the North of England, fundamentally redrawing the British political map—had produced a wave of fresh MPs, and the team had little chance of keeping up. Around 4:45 a.m., the TV monitor suddenly went dark, mid-count. No one stood up to examine it.

“I think it’s just died,” said Grey. “Which is appropriate, because I’m about to.”

Geni estimated there were still as many as 100 new MP biographies left to put up or update, and the votes were still coming in. They were hitting a wall. Other Wikipedia editors would be sure to pick up the baton in the morning—that was one consolation.

“There is no deadline,” said Grey, sighing.

“There is no deadline,” repeated Geni.

This article has been updated to correct Geni’s editor name, and clarify Lubbock’s title.