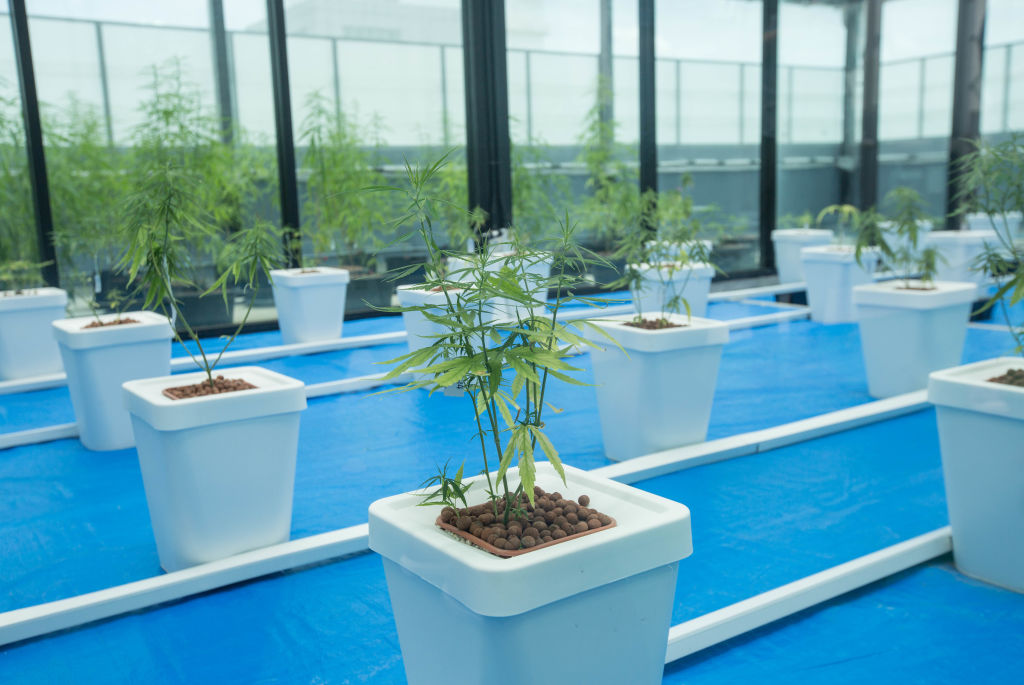 RANGSIT UNIVERSITY, BANGKOK, PATHUM THANI, THAILAND - 2019/08/02: Cannabis plants used for medical purposes seen being display in an indoor plantation at Rangsit University in Pathum Thani Province, north of Bangkok. The legalisation of medical cannabis was approved by the government on December 26, 2018 in Thailand. The country is now ready to distribute over 10,000 bottles of medical cannabis oil throughout the hospitals from August 07, 2019. The medicine will be mostly use for patients with Alzheimer disease, Parkinson disease, epilepsy, nausea and chronic pain. (Photo by Guillaume Payen/SOPA Images/LightRocket via Getty Images)
Guillaume Payen—SOPA Images/LightRocket via Getty Images

Marijuana legalization seems to be making strides across the globe, but there are still plenty of pockets where the idea faces fierce resistance, namely in Asia.

Recreational cannabis has been legal in Uruguay since 2013—the first full legalization of the modern era—and in Canada since 2018. In the U.S., recreational pot is legal in the District of Columbia and 11 states, starting in 2012 with Colorado and Washington and most recently with Michigan this week. Medical marijuana is legal in several more U.S. states and many more countries.

Australia, New Zealand, and various countries in Europe are either looking to legalize or have already legalized medical marijuana. But in Asia, cannabis is illegal almost everywhere. In Singapore and Malaysia, possession can lead to the death penalty.

There is a stigma around cannabis in Asia that has existed “since the Opium Wars, especially in this region,” said Kunal Sachdev of legal advisory DFDL Thailand, which works with Southeast Asian startups and emerging tech companies on regulatory issues. He make the comments at the Infinity Ventures Summit in Bangkok on Tuesday. At that time, he said, the plant was “swept under the rug alongside other forms of illicit narcotics without fully understanding what can be done [medically].”

Two countries, South Korea and Thailand, broke from Asia’s anti-marijuana stance by legalizing the product for medical purposes in 2018. The move opened the door to medical marijuana companies looking for new markets.

Nicole Godresse, director of emerging markets in Asia Pacific for Canadian medical cannabis firm Tilray, also spoke at the Infinity Ventures Summit and described Tilray’s strategy in Australia and New Zealand, which the company hopes to replicate in Thailand.

“We initially went in and started with a clinical trial, and then with those relationships with the government, we spoke to them about quality standards [so that] when patients go to a doctor they get a product with a repeatable response [and set a] gold standard,” Godresse said.

Fortune is a sponsor of this year’s summit.

Tilray—which became the first cannabis company to list on NASDAQ when it went public in 2018—is currently the number one medical cannabis company by market share in Australia and New Zealand.

Sachdev said he is “very proud” that medical cannabis was legalized in Thailand, and hopes other Asian nations will follow suit.

He said the demographic trends of countries like Japan, where 28% of the population is over 65, and where marijuana is illegal—medical or not—offer hope. Medical marijuana is often prescribed for chronic pain, an ailment that crops up with age, and has also been found to lessen tremors in Parkinson’s disease, according to Harvard Medical School.

“If you look at the Asian population generally, apart from Cambodia and Laos, there’s an aging population,” Sachdev said. “There’s going to be a high demand for medicinal cannabis products.”