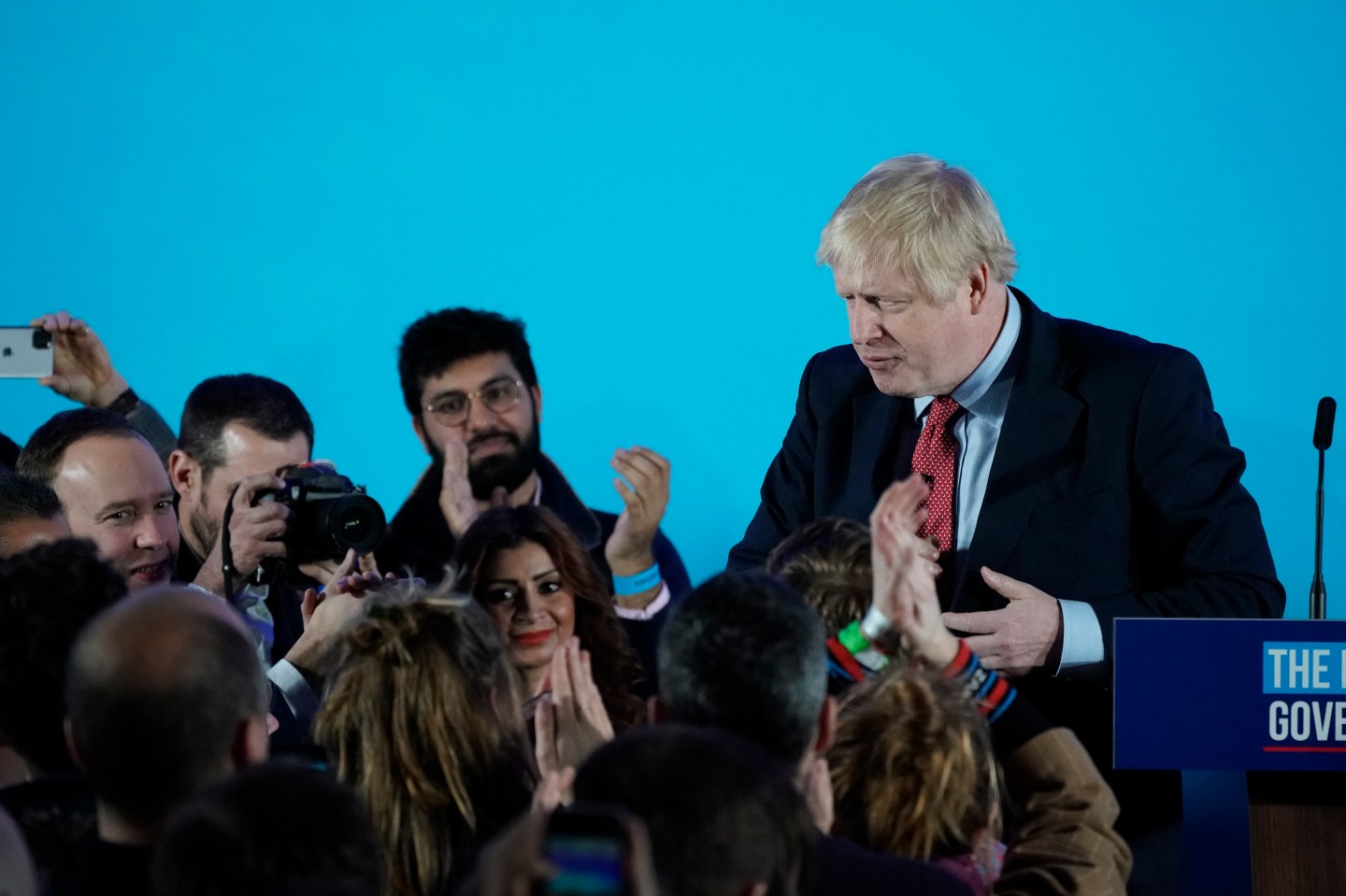 LONDON, ENGLAND - DECEMBER 13: British Prime Minister and leader of the Conservative Party Boris Johnson leaves after speaking to supporters and press as the Conservatives celebrate a sweeping election victory on December 13, 2019 in London, England. Prime Minister Boris Johnson called the first UK winter election for nearly a century in an attempt to gain a working majority to break the parliamentary deadlock over Brexit. As the results roll in the Conservative Party has gained the number of seats needed to win a clear majority at the expense of the Labour Party. Votes are still being counted and an overall result is expected later today. (Photo by Christopher Furlong/Getty Images)
Christopher Furlong—Getty Images

Boris Johnson won an emphatic election victory that redraws the political map of Britain and gives the prime minister the mandate he needs to pull the U.K. out of the European Union next month.

The result spectacularly vindicated Johnson’s gamble on a snap election to break the deadlock in Parliament over Brexit, as his Conservatives were set for their biggest majority since 1987 under Margaret Thatcher. The pound rose by the most in almost three years as the scale of the Tory victory became clear.

The outcome was a stark repudiation of the main opposition Labour Party under Jeremy Corbyn and his radical program of state intervention, nationalization of key industries and tax rises for the better off. Corbyn announced his intention to resign after a catastrophic run of losses to the Tories in Brexit-supporting districts in northern England and Wales. These areas were considered traditional Labour strongholds and Johnson’s success here was the breakthrough that secured his victory.

Elsewhere, Liberal Democrat leader Jo Swinson, who campaigned to remain in the EU, lost her seat.

Having routed political opposition to Brexit across much of the country, Johnson still faces resistance in Scotland, where support for the pro-independence Scottish National Party surged, setting up the prospect of a renewed constitutional standoff over the U.K.’s future.

Northern Ireland may also present a thorn in Johnson’s side. Unionist parties lost their majority and nationalist made advances, suggesting that pressure for a referendum on Irish unity may grow.

How Brexit would play out in the U.K.’s third general election in four years was never certain even as Johnson held a lead over Labour in polls. What emerged was the biggest shift in British political allegiances for decades as areas that had voted to quit the EU turned away from Labour and toward Johnson and his “Get Brexit Done” mantra.

With all but one seat declared, the Conservatives had won 364 of the 650 seats in the House of Commons, a gain of 47, to Labour’s 203 seats, down 59. The results showed the Conservatives taking some districts from Corbyn’s party for the first time ever, compounding Labour’s fourth successive general election defeat.

President Donald Trump tweeted his congratulations, again raising the prospect of a “massive new trade deal” after the U.K. leaves the EU.

Congratulations to Boris Johnson on his great WIN! Britain and the United States will now be free to strike a massive new Trade Deal after BREXIT. This deal has the potential to be far bigger and more lucrative than any deal that could be made with the E.U. Celebrate Boris!— Donald J. Trump (@realDonaldTrump) December 13, 2019

Johnson’s majority gives him the power to get his own way on Brexit, especially if he needs extra time to negotiate with the EU. He has said he will start to push legislation through parliament before the end of the year to meet the current departure date of Jan. 31.

Investors responded to what they saw as a possible end to the political gridlock and uncertainty that has hung over British assets for years. The pound was up 1.8% to $1.34 as of 8:57 a.m. in London. The yield on 10-year gilts jumped four basis points to 0.855% and traders scaled back bets for a rate cut from the Bank of England in the coming year. The benchmark FTSE 100 index of stocks, which is heavily comprised of exporters vulnerable to currency appreciation, still managed to jump. The more domestically-focused FTSE 250 at one point soared the most since 2010.

After holding his seat west of London, Johnson said the result was “historic” and “a powerful new mandate to get Brexit done.”

For Labour, the heavy losses raise questions over its future direction after voters decisively rejected Corbyn and his program. Corbyn plans to remain in place until a successor is chosen but he’s facing pressure to stand aside immediately.

“Tonight is an absolute disaster for the Labour Party,” Ian Murray, Labour lawmaker for Edinburgh South, told the BBC. “There has got to be a change of direction. That work either has to start tomorrow or the Labour Party has to reassess what it stands for.”

In England and Wales, voters moved to the Conservatives almost everywhere, but particularly strongly in places that voted to leave the EU. Former industrial areas abandoned Labour for the first time in generations, with mining and steel towns that suffered from mass unemployment under the Conservatives in the 1980s now embracing the party.

Scotland, which opposed Brexit in the 2016 referendum, staged a rebellion as the SNP retook seats it lost two years ago. It ended the night with 48 of 59 districts, halving the Tory seat tally, defeating the Liberal Democrat leader and reducing Labour to a solitary district. SNP leader Nicola Sturgeon reiterated her demand for another independence referendum, something Johnson has ruled out.

“Boris Johnson has a mandate now to take England out of the EU,” Sturgeon said. “He must accept that I have a mandate to offer Scotland the choice of an alternative future.”

For Johnson, a convincing majority marks the culmination of an extraordinary rise to power. After he led the pro-Brexit campaign three years ago, Johnson watched as Theresa May tried and repeatedly failed to negotiate an EU divorce agreement the House of Commons would accept. In power, Johnson secured a revised Brexit deal with the EU, but also couldn’t persuade Parliament to rush it into law.

That was enough to prompt the premier to trigger an early election — the next one wasn’t due until 2022 — in the hope voters would give him the majority he needed. He now has a mandate “not just to get Brexit done,” he said, “but to unite this country and to take it forward and to focus on the priorities of the British people.”

Addressing supporters in London on Friday morning, he said he had a “heavy responsibility” after winning support from former Labour heartlands. “We must rise to the challenge,” he said.