Pro-Brexit Boris Johnson Expected to Win U.K. Election by a Large Majority, According to Exit Poll 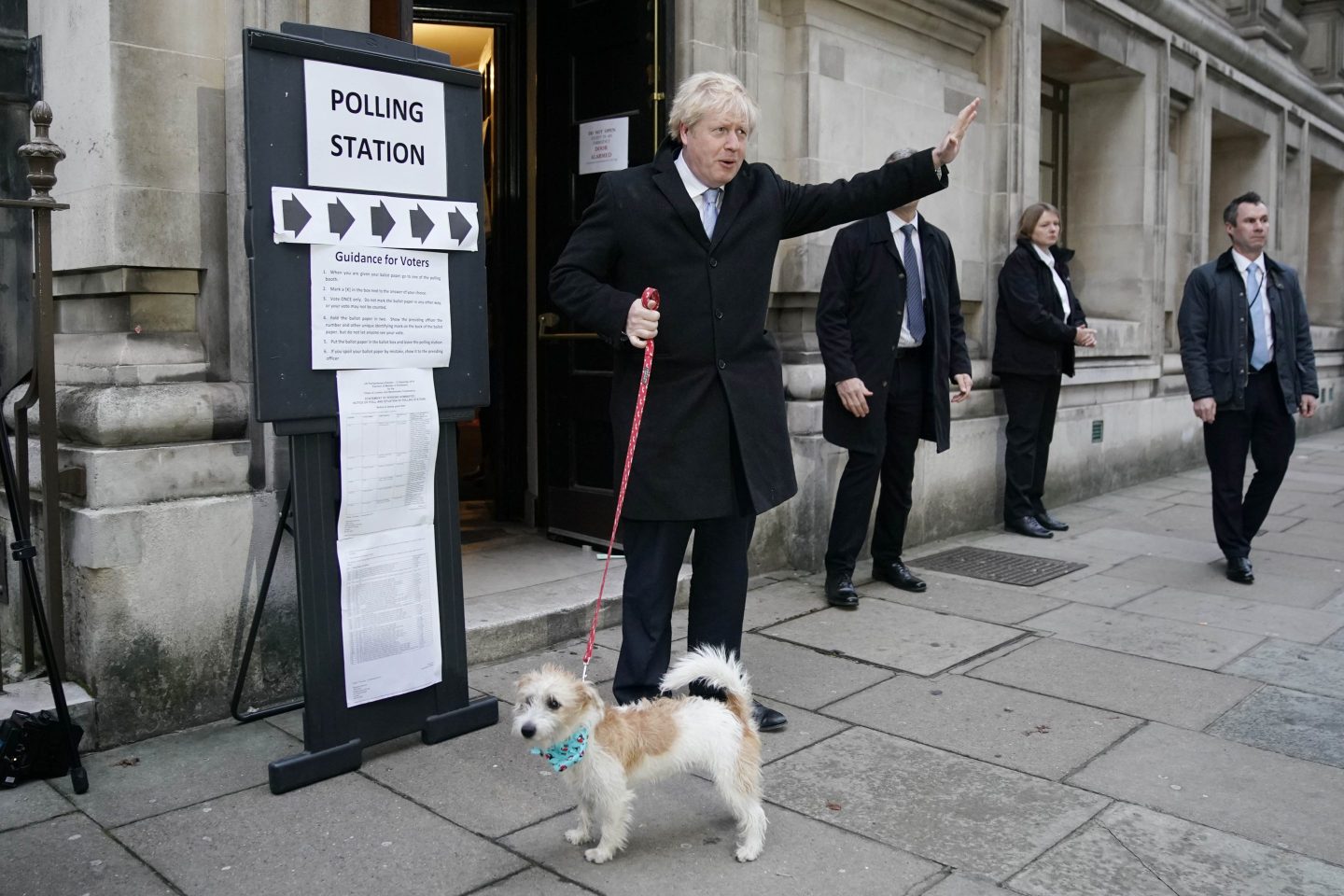 LONDON, UNITED KINGDOM - DECEMBER 12: Prime Minister Boris Johnson poses outside Methodist Hall polling station as he casts his vote with dog Dilyn, on December 12, 2019 in London, England. The current Conservative Prime Minister Boris Johnson called the first UK winter election for nearly a century in an attempt to gain a working majority to break the parliamentary deadlock over Brexit. The election results from across the country are being counted overnight and an overall result is expected in the early hours of Friday morning. (Photo by Christopher Furlong/Getty Images)
Christopher Furlong—Getty Images

Boris Johnson is on course to win a decisive victory in the U.K.’s general election, vindicating his gamble on an early vote and putting the country on track to leave the European Union next month.

The official exit poll predicted the prime minister’s Conservatives will win 368 of the 650 seats in the House of Commons—a large overall majority. The main opposition Labour Party is projected to secure 191 seats.

While some Tory hard-liners will want Johnson to cut ties with the EU entirely, his large majority will give him more power to get his own way, especially if he needs extra time to negotiate with the bloc. “This is obviously Johnson’s dream scenario,” said Tim Bale, professor of politics at Queen Mary University of London.

For Labour leader Jeremy Corbyn, the projection is a nightmare. He staked everything on a radical plan to hike taxes for the rich and nationalize swathes of industry, but is now likely to face intense pressure to quit if the forecast is confirmed by the results.

The exit poll is based on a mass survey of tens of thousands of people after they cast their ballots. That has generally made it more accurate in predicting the outcome of U.K. elections than snapshot surveys of voters’ intentions conducted during the campaign.

For Johnson, a big majority would mark the culmination of an extraordinary rise to power. After he led the pro-Brexit campaign three years ago, Johnson watched as Theresa May tried and repeatedly failed to negotiate an EU divorce agreement the House of Commons would accept.

When she called a snap election in 2017 expecting a landslide, she lost the majority she started with, plunging the U.K. into two years of chaos as a deadlocked parliament failed to agree on the way forward. May was finally forced to resign, allowing Johnson to take over as prime minister in July with a promise to deliver Brexit “do or die” by the end of October.

Despite months of threats and bellicose rhetoric, he eventually secured a new Brexit deal with the EU, but couldn’t persuade parliament to rush it into law in time for him to meet his deadline. That was enough to prompt the premier to trigger an early election—the next one wasn’t due until 2022—in the hope voters would give him the majority he needed, in his words, to “get Brexit done.”

If the exit poll proves correct again this year—and most of the results will be declared overnight—Johnson’s bet will have paid off.