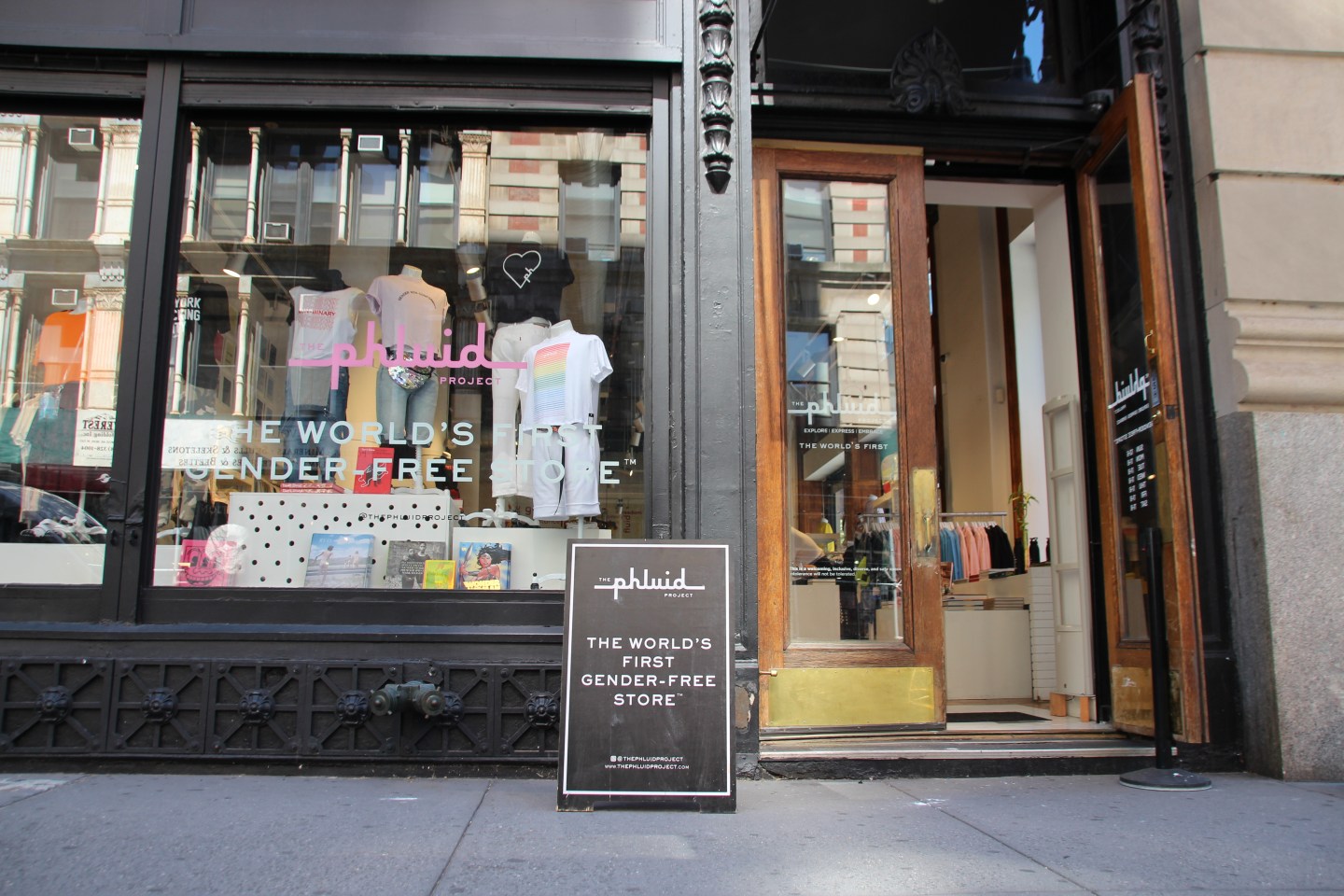 While gender-free clothing has been on runways and in fashion magazines for years, building a retail space around the concept was until recently seen as financially risky. Now, some companies are out to prove that the cultural fulcrum has shifted enough to give it a try.

According to Pew research, 35% of Generation Z knows someone who identifies as non-binary and prefers gender neutral pronouns—and millennials and even Generation X aren’t far behind. Retailers, and in particular clothes sellers, have taken notice.

“I do believe gender-neutral fashion is the future,” Fashion Institute of Technology Professor Dawnn Karen said. “I feel like we’re moving towards that.”

Holding itself out as the first gender-free store in New York, The Phluid Project in Manhattan’s Soho neighborhood is part of this nascent segment. The space is a combination store, cafe and event space geared toward the LGBTQ community.

Phluid Project founder Rob Smith, 54, spent 30 years as a retail executive before opening the store. While Phluid has been up and running a few years now, only recently has the concept of making a commercial go of gender-free clothing spread to bigger corporate retail.

The ascent of Generation Z, Smith explained, is the moving force.

“There is a paradigm shift that is currently happening in our society. An unlearning and a relearning,” Smith said. “By next year, Gen-Z [will account] for one-third of the national population, which accounts for 40% of U.S. spending power. It’s time to change with the times and generations, because their voice and power is undeniable.”

“It became clear to me,” Smith said, “that there was a need to shatter the historic infrastructure of companies we’re operating under.”

On a visit to the Phluid Project earlier this year, there were none of the traditional signs to send you to specific clothing departments. Non-gendered mannequins stood atop tables, sporting dresses, pants, shirts and graphic tees that say, “They Power,” a reference to the pronoun preference of many non-binary individuals.

The company said that, after spending its first year focusing on establishing the brand and a unique open sales floor experience, it’s now looking to better develop its social media and e-commerce platforms, as well as strategic partnerships.

This summer, Phluid partnered with HBO and its series “Euphoria,” a drama about growing up in Gen Z America, and set up several pop-ups across the country, offering shoppers a capsule collection and panel discussions. Phluid also has a partnership with French clothing label Equipment on a gender fluid collection.

Fifty-six percent of Gen Z consumers already shop outside of their gender, ignoring clothing that’s labeled and categorized into gendered sections, according to a study by advertising agency J. Walter Thompson. Smith is very much acquainted with how those decisions are made. Before the Phluid Project, he worked for Nike, and eventually moved on to become an executive vice president at Macy’s, and then Victoria’s Secret. He also served on the board of shoe-seller Steve Madden.

“I started to share the idea with friends and business partners and got a cold reaction,” Smith said of the Phluid Project’s beginnings. “It is difficult, and understandable, to go to investors with an unproven concept.”

“Other brands have to worry about losing customers because their concepts and missions are often antiquated,” Smith said. “We are a blank canvas.”

His store not only sells gender neutral clothing: it seeks to guarantee that its clothing comes from designers who support the gender-free clothing mission. The store’s original clothing only makes up 50% of its inventory. The rest is made by designers aligned with the company’s mission and concept. The store doesn’t shop vintage or buy from wholesale.

The Phluid Project isn’t the lone retailer in this space. Labels such as Radimo and Official Rebrand—which emphasizes sustainability—are on the same path.

According to Business of Fashion’s 2018 State of Fashion research, 66% of millennials worldwide are willing to spend more on brands that are sustainable. In response to this data, Official Rebrand is “turning unsold goods into new, one-of-a-kind collections,” said MI Leggett, its founder. Official Rebrand modifies donations with design and alterations, including by painting clothing with phrases and figures.

“The first pieces came from my own closet,” Leggett said. “Now I take clothing donations from friends, family, and clients commissioning custom work.”’

—2020 Crystal Ball: Predictions for the economy, politics, technology, and more—These whiskey and bourbon picks make great gifts this holiday season
—Malls of tomorrow will be less big box, more lifestyle, and play well with e-commerce
—These are the jobs artificial intelligence will eliminate by 2030
Follow Fortune on Flipboard to stay up-to-date on the latest news and analysis.