After a Violent ‘Yellow Vest’ Anniversary, What’s Next for the Movement? 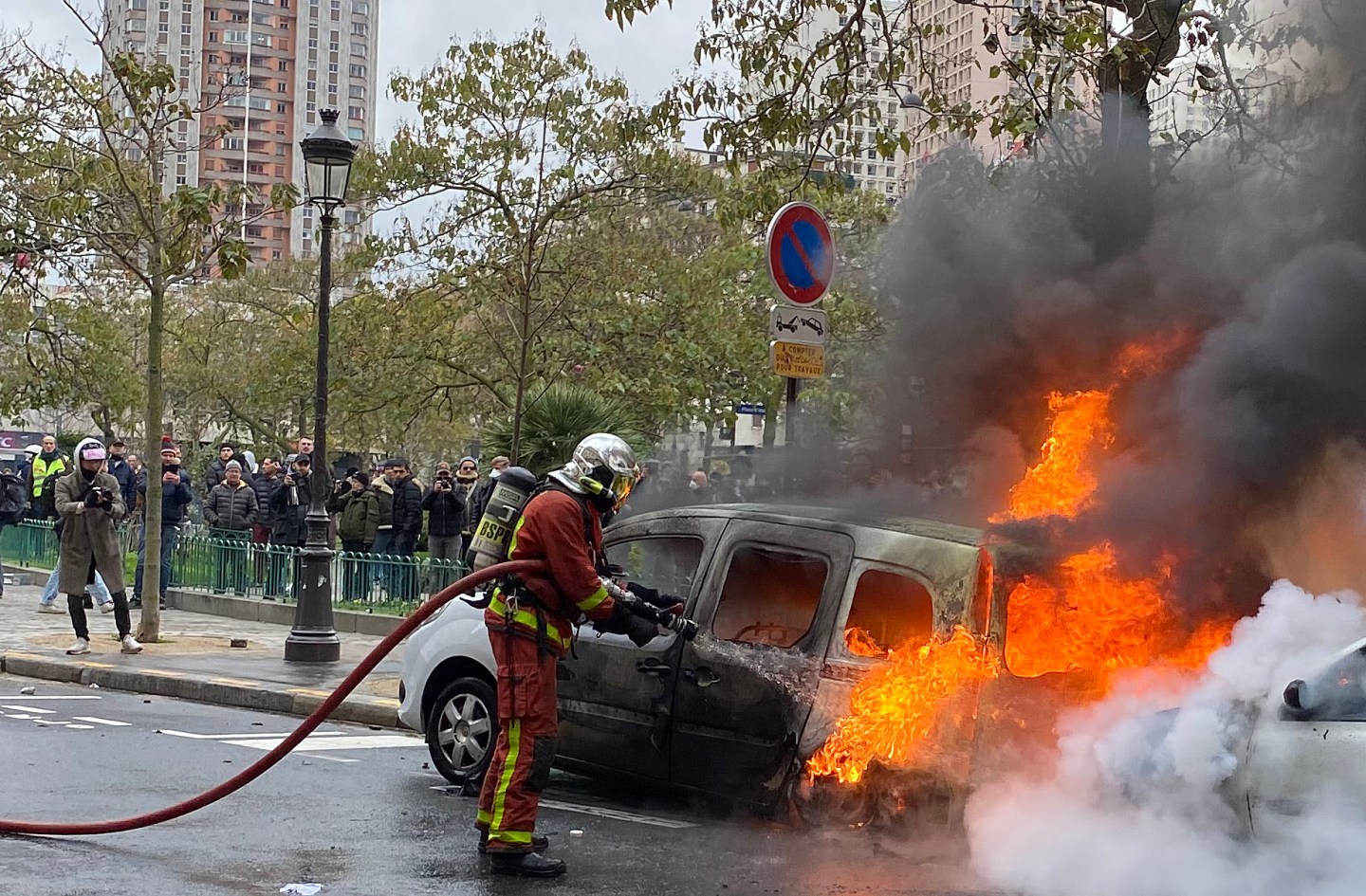 PARIS—By the time Arnaud Lory arrived to Place d’Italie in Paris on November 16, the violence was in full swing. Dressed in black, casseurs—a term the French use to describe people who come simply to break things—were flipping cars and trying to build a barricade using scaffolding. Many people were not wearing yellow vests, despite the protest being organized by the gilets jaunes. Soon, police started firing teargas grenades into the crowd. One protester, who was speaking peacefully at the time, was hit in the face with a projectile and later lost use of his eye.

Lory, 27, is a freelance documentarian who also waits tables in central Paris. He went from taking photos at Place d’Italie to a shift at the café where he works near Chatelet, a busy transport and commercial hub. There were only about 200 protesters there, he said, trying to take over a neighboring shopping center. The crowd was much calmer than at Place d’Italie, but police were still firing teargas to disperse the protesters. In usual French style, despite the violence and the cold weather, people were still sipping coffees on the terraces outside. When a protester kicked a teargas canister out of the way, it landed on the terrace of Lory’s café, sending the tourists scattering to take cover in the restaurant.

November 17 was the one-year anniversary of the gilets jaunes in France, a protest movement that began after the French government announced a green tax that would cause gas prices to rise. The violence marked the anniversary of a movement that remains difficult to categorize. These most recent protests—much like the gilet jaunes themselves—were disparate.

Where young, often unaffiliated people flipped cars in Paris, working mothers peacefully occupied highways in Normandy. One thing was clear: the yellow vests are still angry—and they haven’t given up yet. And the future of their movement can provide clues to the growing ideological rifts that are shaping class politics worldwide.

“Before, it was more strictly the gilets jaunes, working fathers and mothers who were on welfare, earned minimum wage, had five children, and were struggling to make ends meet,” Lory said. Now, echoing a sentiment described by many French people, he said it has become an “identity crisis,” a movement attracting unemployed young people, other activists, and people who simply feel lost in contemporary French society.

The gilets jaunes movement, named for the yellow vests that all French drivers are required to keep in their cars, began in 2018 after President Emmanuel Macron announced a green tax on carbon emissions. With gas prices in France already as high as nearly 7 euros a gallon, the people who relied on cars to get to work revolted. In the year since, the movement has changed significantly, especially after Macron decided to scrap the tax.

The yellow vests have morphed to fashion themselves as a much broader resistance to the ruling elite, to Parisian centralization, and to globalization writ large. It’s also a class struggle: a fight between country and city, those who live on the edges of French society and those who govern them. This is of course a very simplistic definition of a sprawling movement, one that includes people from the far right and the far left and doesn’t fit neatly into any American political camp.

The numbers have waned drastically since those first protests a year ago. Where the gilets jaunes protests in November 2018 saw 280,000 people in the streets across France, official figures put the anniversary protesters at 28,000, with just 4,700 in Paris (the gilets jaunes claimed the numbers were closer to 44,000). In the past year, the movement has moved away from being a protest against a specific economic policy to a much more ambiguous expression of anger against what they think President Macron and his government represent: namely elitism, big banks, and centralized government in Paris.

“They’re a population that has lost trust—they don’t trust political representation; they don’t trust the system, and so on,” said François-Bernard Huyghe, director of research at the French Institute for International and Strategic Affairs and author of the book “Inside the Head of the Gilets Jaunes.” Given the group’s suspicion of government, they have refused to select their own leaders, which has arguably made it difficult to sustain. They have made some specific demands, such as more direct democracy in the form of referendums, but their discourse is often much more ideological than practical.

The future is murky for the gilets jaunes, in part because while they’re effective at mobilizing people, they’re not highly organized. Additionally, as the numbers have dwindled, some of the people who remained have grown more extreme. Anti-Semitism and the diffusion of conspiracy theories have only further distanced them from people who might otherwise support their cause. According to a recent poll, 55% of people support or have sympathy for the gilets jaunes, but 63% don’t want a resurgence of protests.

In order to sustain itself, it’s possible the yellow vests might morph with other movements. That could mean joining forces with other protests that take on class disparity, such as the upcoming strike in protest of retirement reforms. There’s even been overlap with growing climate change activism. Despite the fact that the yellow vests began in response to a carbon tax, some gilets jaunes participated in the recent global Climate March. One yellow vest protester carried a sign at the Climate March that read, “The end of the month and the end of the world: the same fight.”

Lawmakers around the world would also do well to attempt to avoid the pitfalls of green legislation that ends up being paid for by the working poor. Class struggle and climate change activism don’t have to be at odds, but future solutions need to take into account those who are vulnerable to bearing their cost.

The same dynamics that motivated the yellow vests—this growing gap between rich and poor, urban and rural, elite and working class—can be seen in the U.S., too. The problems of the gilets jaunes are shared by many people worldwide, expressed by coal workers who supported Donald Trump or even those who voted for Brexit: a feeling that the system of globalization had made some rich and left others behind.

—Wall Street isn’t that worried about Elizabeth Warren, but they’re watching
—Are white Democrats turning on presidential candidates due to Latino outreach?
—All the candidates who qualify for the December Democratic debate—so far
—The 2020 tax brackets are out. Here’s what you need to know
—Obama worries that tech has led society astray
Get up to speed on your morning commute with Fortune’s CEO Daily newsletter.