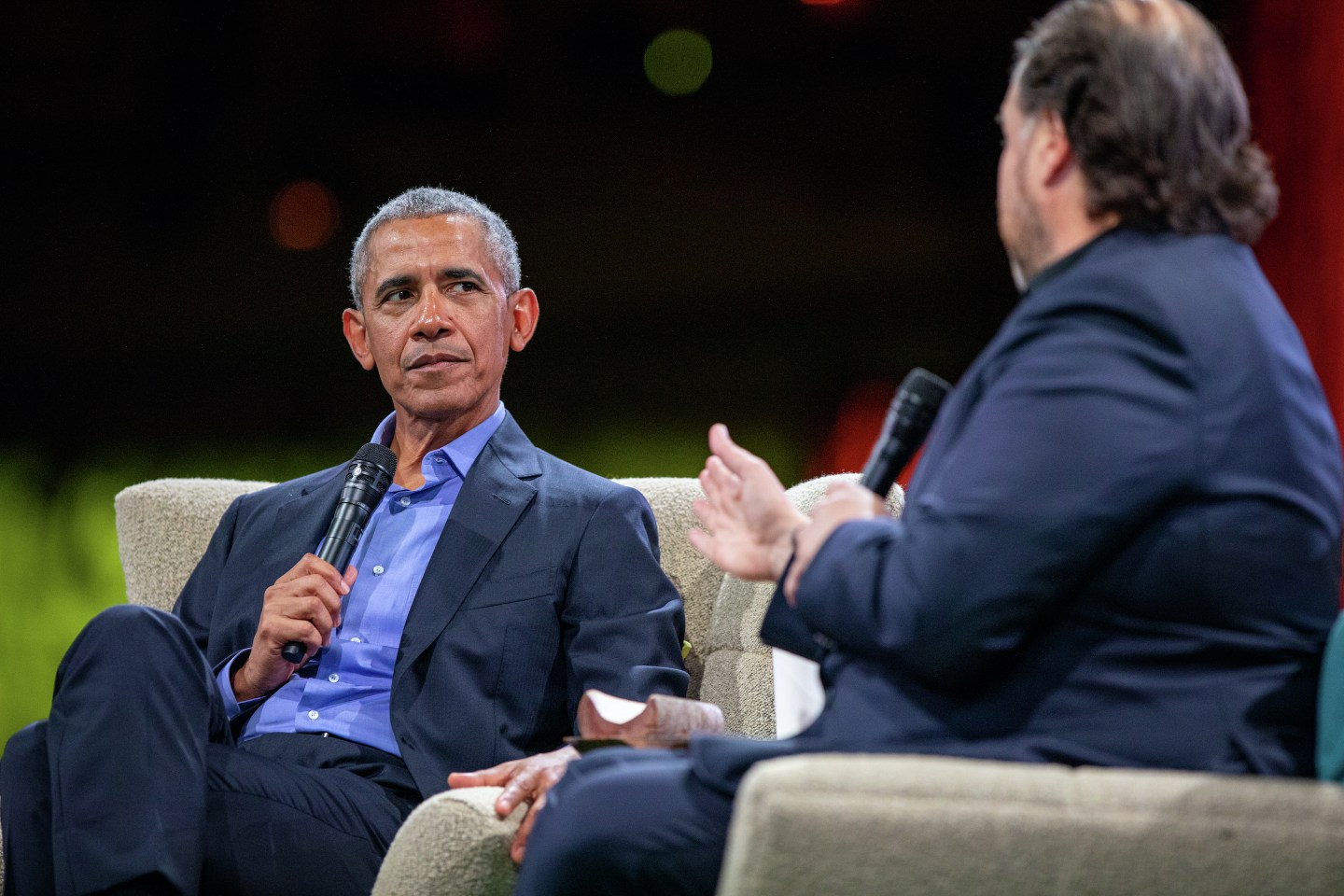 Former U.S. President Barack Obama says two of his top three concerns for the next generation are driven in part by the technology industry.

Beyond his top concern, which is climate change, Obama said he’s most concerned about the rise of extreme inequality and the environment that disruptive technology has created. He said that technology is partially to blame for a set of values that is focused on status, and that internet companies have created an environment in that has caused mass confusion about what is credible.

“When you have big disruptive internet tech, it can be a dangerous moment,” he said. ”Part of what happens is people don’t know what’s true and what’s not.”

Obama made the statements at Salesforce’s Dreamforce tech conference in San Francisco on Thursday, where he spoke to Salesforce CEO Marc Benioff in a fireside chat. The chief executive also has been an outspoken advocate for technology companies taking more responsibility for the products they release and their social impact.

President Obama’s appearance comes at a critical moment for the technology industry, which is getting more scrutiny from the public, government officials, and regulators for creating cesspools for hate speech, echo chambers of extreme ideologies, and mediums for foreign players to attempt to meddle in big elections. Obama suggested that technology—and perhaps the companies that create them—have led society astray.

“In part fed by social media and technology, we’re chasing after the wrong things, we want the wrong things,” he said. “So much of the anger and frustration has to do with issues of status.”

And status, which is placing oneself above all others, is the root of homophobia, racism, and sexism. Instead of getting caught up in what modern tech promotes, Obama said people should re-evaluate what it is they actually want when all is quiet.

“Part of solving big problems is not a just a matter of finding right technical solution, but also figuring out, ‘how do we restore some sense of our common values?’” he said.

The former president also emphasized the importance of promoting diversity, saying it’s “not charity” but rather something to help companies avoid blind spots. Tech companies, in particular, have been some of the worst in hiring a diverse workforce, resulting in several companies having notable problems when their products discriminated against users of color.

“If you’re running a business right now, and you’ve got no African Americans or Latinos or Asian Americans… around the table, you’re missing a marker,” he said.

But Obama didn’t completely poo-poo the technology industry. Rather, he said he still hopes that technology can turn things around, but admitted it’s going to take a lot of work to get there.

”I still believe the internet could be a powerful tool for us to see each other and unify us,” he said. “But right now, it’s splintering.”