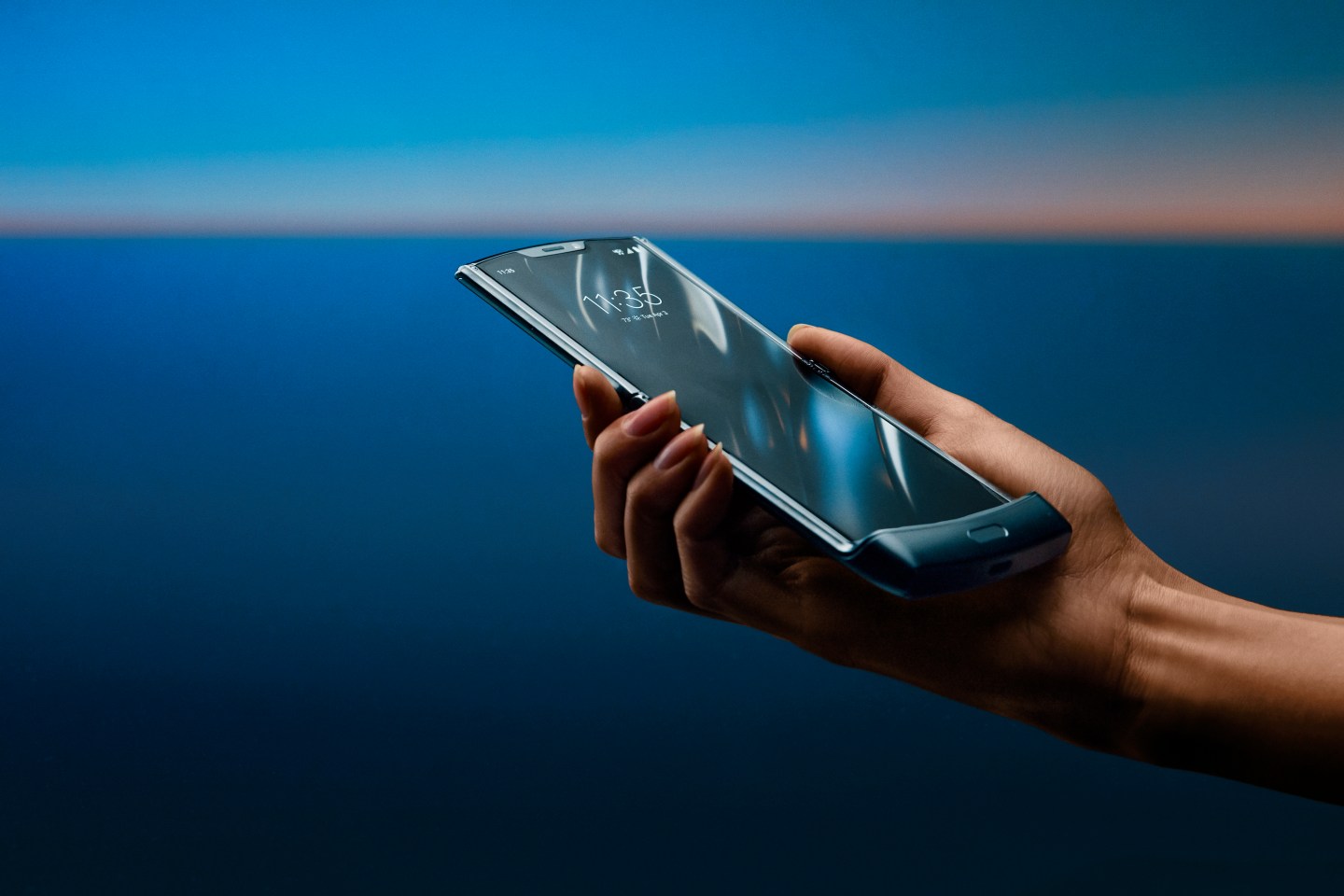 Motorola announced the new Motorola Razr on Wednesday, a $1,500 folding phone running Android that will be available for pre-order in late 2019 and ship in early 2020.
Courtesy of Motorola

Before smartphones—with their touchscreens and apps—changed the world, Motorola RAZR flip phones were the must-have mobiles of the early 2000s. Approaching 2020, the Lenovo-owned handset maker wants to recapture some of that handset’s old magic with a smartphone of its own that marries an old form factor and with new folding screen technology.

On Wednesday evening, Motorola announced the Razr, a mobile device with all the modern trappings of the contemporary smartphone as well as the flip phone design that made the classic RAZR, well, a classic. Available for pre-order on Verizon in the U.S. starting Dec. 26 for $1,499 and shipping in January 2020, the Razr is crafted with stainless steel and damage-resistant Gorilla glass, and a large, 6.2-inch pOLED display that folds in half when the phone is closed. On the outside, a 2.7-inch gOLED display shows information, including notifications, song tracks, and the time of day. The Razr also sports two cameras, a 16-megapixel shooter on the lid and a 5-megapixel selfie cam above the folding screen.

The Razr will run Android 9 Pie as its operating system, powered by a Qualcomm’s Snapdragon 710 processor. The chip has eight computing cores running at 2.2 GHz, and is paired with 6 gigabytes of RAM along with 128 gigabytes of onboard storage. According to Motorola, the Razr should get the average user “a full-day of use,” but the company would not further elaborate on that claim.

During a press event in Los Angeles on Tuesday, Motorola outlined the Razr’s lengthy development process that yielded 26 different prototypes, some tall and “open” like the iPhone and many Android mobile devices. The company ultimately settled on a design that closely resembled the original RAZR’s flip phone form factor. But the modern-day version swaps out the physical buttons with a large folding touchscreen display, of course.

“We asked customers, and they’d say, as much as they loved the size of their screens, if there was a way to really somehow shrink the device just to fit in their shirt pocket again, that would be great,” explained Paul Pierce, Motorola’s executive director of consumer experience design, who also worked on the original RAZR V3, which was released in 2004. “They were really asking us for the best of both worlds.”

Pierce says Motorola looked at screen sizes and ratios, explored how the device felt in users’ hands, and even considered folding out a smartphone to make a small tablet. “We realized, relatively quickly, the path that we needed to take, and it was around this idea of a clamshell,” Pierce said. “It was very clear.”

Motorola’s new Razr sticks closely to the old RAZR’s design, right down to the “chin” at the bottom of the device, which includes the speakers.
Photo by JP Mangalindan

After the failure of the folding display on the Samsung Galaxy Fold, which forced the company to delay that folding phone’s release, Motorola put the Razr’s screens through rigorous testing. The company says the Razr’s folding display ought to last for however long the average person uses their device.

Fortune spent 30 minutes with a Razr unit, and while that’s not nearly long enough to pass a final judgment, Motorola’s device seemed to nail some of the basic fundamentals, at least. The Razr’s stainless steel chassis—and the hinge to fold it shut—feels sturdy. The handset is heavier than an iPhone 11 but lighter than an iPhone 11 Pro Max. The Razr’s folding display appears bright and colorful, though the model’s brightness was turned up to the maximum setting. And despite some concerns that the Razr doesn’t use Qualcomm’s most high-performance of chips, like the Snapdragon 855, using apps and browsing the internet on the Razr seemed snappy enough.

When shut, the Razr’s 2.7-inch screen shows information like notifications and the time.
Photo by JP Mangalindan

But not everything with the Razr is sharp. For instance, the phone only comes in “Noir Black”—just like the hundreds of other Android smartphones out there—and its speakers fire out sound from bottom, or “chin,” of the device. That might be fine if you were trapped out in the woods without any other speakers to keep you company, but it’s a subpar audio experience compared to its modern day competition. The Razr’s 128 gigabytes of onboard storage also underwhelms, especially given that competing phone offer shoppers options up to 512 gigabytes. The Razr’s storage isn’t exactly anemic, but it will surely turn off photo and video buffs—especially given the flip phone’s $1,500 price tag.

It’s hard to say whether Motorola’s new Razr will stand out in an extremely competitive smartphone market come January. Its design looks both flashy and nostalgic, but it comes at too high a cost. Still big spenders seeking a compact, throw-back smartphone that can easily slip into a back pocket, may have found their mobile at last. At the very least, the Razr should put put a definitive end to butt-dialing.