The New White Flight: Are White Democrats Turning on Presidential Candidates Due to Latino Outreach? 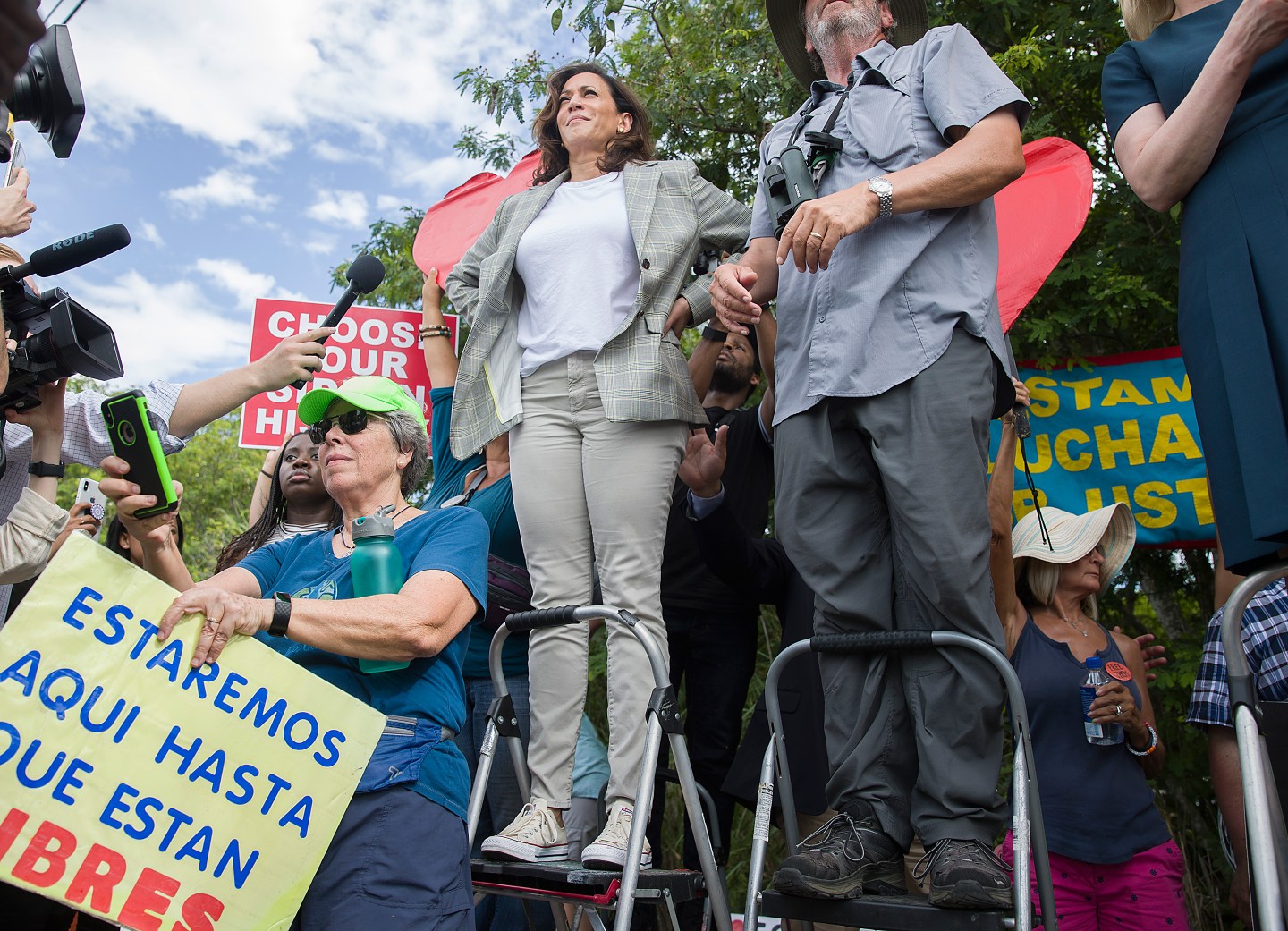 HOMESTEAD, FLORIDA - JUNE 28: Democratic Presidential candidate, Sen. Kamala Harris (D-CA) stands on a ladder to see over a fence into the grounds of a detention center for migrant children on June 28, 2019 in Homestead, Florida. Democratic presidential candidates visited the detention center, which is the nation's largest center for detaining immigrant children, as the candidates spend time in the Miami area after participating in a nationally televised debate. (Photo by Joe Raedle/Getty Image)
Joe Raedle—Getty Images

Predictably, candidates for the White House made it a campaign issue. Sen. Kamala Harris (D-Calif.) issued missives in English and Spanish. South Bend, Ind., Mayor Pete Buttigieg posted a video on Twitter encouraging DACA recipients to renew while they still can. Former Vice President Joe Biden, Sen. Bernie Sanders (I-Vt.), and Elizabeth Warren (D-Mass.) all issued statements on DACA or larger immigration reform strategies in the days ahead of the hearing.

It is hardly a surprising stance for Democrats as every candidate has expressed support for a pathway to citizenship for the roughly 800,000 young immigrants who qualified for DACA. But messages that are perceived as direct support for Latinos can have broad ramifications on other sectors of the electorate, a growing body of research shows. A new study indicates white Democrats exposed to political messaging designed for Latinos exhibit decreased support for the Democratic presidential candidate and may flip to the GOP.

The paper, published in September in the journal Political Behavior, argues efforts to court Latinos drove white Democrats to reassess their position relative to the U.S. political parties. The author, University of Michigan assistant professor of political science Mara Cecilia Ostfeld, says this could be a watershed moment in U.S. politics. Generally, as whites are moving to the right of the political spectrum, racial and ethnic minorities support the left.

“There is a new racial alignment occurring as the country becomes more politically polarized and there are shifting social identities,” Ostfeld said.

U.S. presidents have targeted Latino voters as far back as John Kennedy and Ronald Reagan. Outreach has been escalating for at least a decade, coinciding with the population’s growing share of the vote and increased political participation. It has been 13 years since House Resolution 4437, which would have made felons out of immigrants living in the country illegally and anyone who assisted them, launched a series of nationwide rallies, some drawing as many as 100,000 people. The movement sparked Latino civic engagement and pushed immigration onto the national agenda, where it has stayed ever since.

Ostfeld ran three experiments during the 2012 and 2016 presidential elections. First, participants watched one of two versions of a real advertisement for President Barack Obama, one in English and one with the same content presented in Spanish. In 2016, she executed two experiments in which participants were shown one of two versions of a mock website. One displayed the headline “Hillary courts undecided voters,” and the other “Hillary courts Latino voters.”

In all of the experiments, white Democrats exposed to the Latino-targeted messaging were significantly less likely to support the Democratic candidate than those who saw the more broadly targeted content. In the third experiment, voters who saw the “Latino voters” headline responded with diminished opinions of Clinton and stronger support for Trump.

In their 2015 book “White Backlash: Immigration, Race, and American Politics,” Marisa Abrajano and Zoltan Hajnal argue the growth of the Latino population and immigration as a political issue has impacted “white’s core political calculus.”

“The growth of the immigrant population over the last 30 years, combined with the news media’s reliance on the Latino threat narrative, work together to fuel concerns over immigration,” they conclude. “In the current political environment, where Republicans have been much more vocal and adamant in their opposition, the millions of white Americans who feel real anxiety about immigration are drawn to the political party that promised to ease such concerns.”

A study by University of Pennsylvania political scientist Daniel Hopkins found merely being exposed to an exit poll that had a Spanish-language option made respondents more likely to express conservative views on immigration.

The phenomenon could be accelerating demographic shifts among party affiliation. In 1997, 75% of registered Democratic voters were non-Hispanic whites. In 2017, the figure was 59%. Meanwhile, the share of Democratic voters who are black, Hispanic, Asian American or of another race has climbed from 24% to 39%. For the GOP, 83% of voters were non-Hispanic whites in 2017, a decline from 93% in 1997, according to Pew Research Center.

Ostfeld compares the current racial realignment to white voter flight from the Democratic party after it championed the Civil Rights Act of 1964 and the Voting Rights Act of 1965, but like Hopkins she discovered profound impacts from simple Latino voter outreach, not major policy proposals or immigration issues.

“It speaks to how subtle cues are jarring the white American voter,” Ostfeld said. “There is past evidence as well that basic attention to non-white voters throws white voters off.”

Reagan and Kennedy could largely reach Latino voters on dedicated media outlets, but as the population has grown it has become more diversified, and a greater percentage is native born and English proficient. Today, Latinos voters are increasingly targeted on the same platforms as all voters.

A record 32 million Latinos are projected to be eligible to vote in 2020, up from 27.3 million in 2016, and the 2020 election will mark the first time Hispanics will be the largest racial and ethnic minority group in the electorate, accounting for roughly 13% of eligible voters, according to Pew Research Center. So, how do politicians navigate these tricky political waters?

Sanders has approached the topic well, Ostfeld said, combining immigration with other issues. He often speaks about immigrants in the context of the commonalities they have with the white working class, and bolstering protections for all laborers.

“When you look back at the Voting Rights Act, which side do you want to be on?” Ostfeld said. “Ultimately, when we look back, I think the morals and ethics will be pretty clear. There is an opportunity to say this is where we stand and what we represent. You can’t always placate everyone …  That said, being on the right side of history is not always a winning strategy in the short term.”

—Bernie Sanders dominates in donations from suburban women
—A government shutdown would be a huge risk for Trump
—Uber and Lyft fight labor leaders to determine the gig economy’s future
—The 2020 tax brackets are out. Here’s what you need to know—More companies are openly supporting abortion rights
Get up to speed on your morning commute with Fortune’s CEO Daily newsletter.