Kissinger’s Warning: U.S.-China ‘in the Foothills’ of an Escalating Cold War 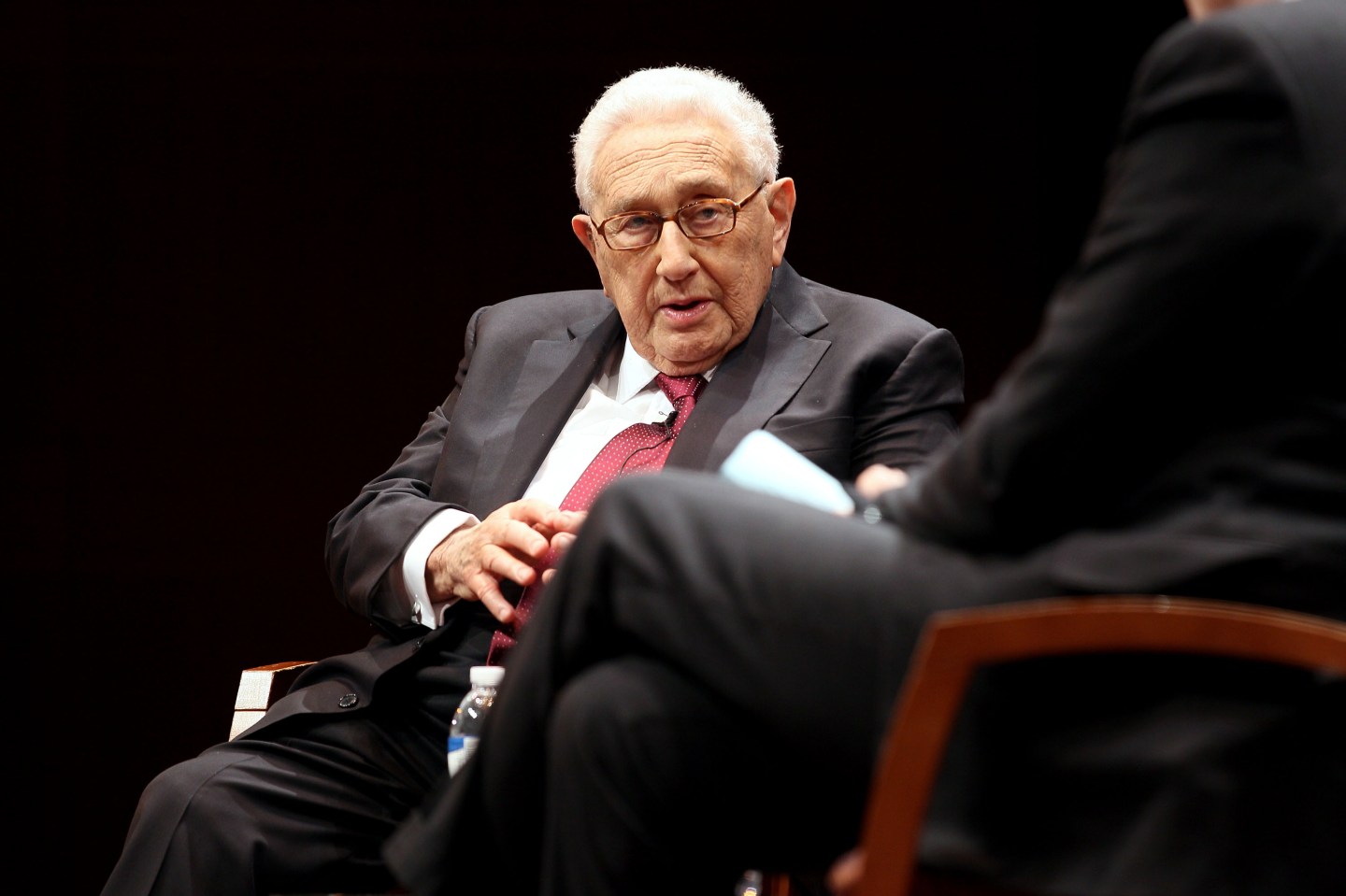 NEW YORK, NY - MAY 13: Henry Kissinger interviewed by Charlie Rose as they Mark The 70th Anniversary Of VE Day at Museum of Jewish Heritage on May 13, 2015 in New York City. (Photo by Steve Mack/Getty Images)
Photograph by Steve Mack — Getty Images

It has been 48 years since Henry Kissinger, then national security adviser to U.S. president Richard Nixon, made his top-secret pilgrimage to Beijing to prepare for an historic meeting between Nixon and Chinese Communist Party chairman Mao Zedong.

The two leaders were sworn Cold War enemies. But Nixon’s visit to China in February, 1972 reversed a quarter century-long standoff between their nations. That meeting, which Nixon later called “the week that changed the world,” laid the foundations for the modern global economy’s most significant—and contentious—partnership.

So it was extraordinary to see Kissinger, now 96, back in Beijing this week, and reflecting on the evolution of the U.S.-China relationship at the Bloomberg Next Economy Forum. In a conversation with historian Niall Ferguson, Kissinger acknowledged that, when he recommended Nixon’s historic overture, he had known relatively little about China other than that it was big, and that the logic of realist political theory suggested the U.S. should be “closer to China than China was to Russia.”

Five decades on, Kissinger sees China as America’s only strategic rival—and potentially a far more dangerous nemesis than the Soviet Union. He told Ferguson the U.S. and China are in the “foothills of a Cold War,” and the conflict between them, if left unresolved, could prove far worse than the first World War.

Kissinger’s comments came as U.S and Chinese negotiators remain deadlocked on trade issues. On Friday Chinese president Xi Jinping said Beijing hopes to thrash out a ‘phase one’ trade pact with the U.S.—but is not afraid to retaliate if necessary.

Hours later, President Trump said a trade deal with China is “potentially very close”—but insisted any agreement would have to be weighted in favor of the U.S. to rectify years of trade imbalances with China.

Kissinger said he hoped trade negotiations would succeed. But he cautioned that a trade deal “can only be a small beginning” to a broader political discussion between the superpowers.

President Donald Trump was widely expected to approve a bipartisan bill supporting the Hong Kong protesters, but on Friday he remained vague about whether he would sign the largely veto-proof bill. "Look we have to stand with Hong Kong, but I'm also standing with President Xi," Trump told Fox & Friends. "I stand with Hong Kong [...] But we are also in the process of making the largest trade deal in history and if we could do that that would be great[.]" Global financial markets sagged this week as optimism around the elusive trade deal waned, but Xi Jinping said on Friday in Beijing that he wants to work out a 'phase one' deal between China and the U.S. South China Morning Post

Trade between Brazil and China this year is expected to reach between $105 billion and $110 billion, according to Brazil's foreign trade secretary. The trade boost was helped along by a 23.6% increase in Chinese imports of Brazilian meat as African swine flu ravages pig herds across China and the government hikes up imports to supplement the shortage. (Chinese consumers account for half the world's global pork consumption). Two-way trade last year reached $98.7 billion. Brazil-China relations warmed recently when Bolsonaro welcomed Xi to Brasilia for a two-day summit—a swift reversal from his previous China-bashing stance. Reuters

The Federal Communications Commission, the U.S. government's telecommunications regulator, voted 5-0 on Friday to designate Chinese telecom giants Huawei and ZTE as national security risks. Carrier customers in rural areas in the U.S., where inexpensive Huawei and ZTE equipment is widely used, will no longer be able to use government funds to purchase Huawei and ZTE products. Replacing the existing equipment may cost as much as $2 billion. Reuters

The first-ever Chinese-made Tesla vehicles are available for a test drive. The Model 3 cars are the inaugural rollouts of Tesla's highly-anticipated Shanghai Gigafactory—the company's first outside the U.S.—and they cost $50,623 to buy, about 2% cheaper than the imported equivalent. The cars have been available for purchase online since late October, but now prospective buyers and fans can take the vehicles for a spin at one of Tesla's 49 "experience centers" across China. CNN

Smartphone and smart home products maker Xiaomi will launch its first manufacturing plant in Beijing. Production will commence at the end of December. Xiaomi co-founder and chairman Lei Jun said the plant will be able to produce 60 smartphones per minute, and will make use of 5G-powered robots, big data, and cloud services to increase productivity. Xiaomi is the world's fourth-largest smartphone maker, and currently depends on manufacturers like Foxconn to make its phones. Xiaomi is rapidly expanding into international markets—its smartphones are India's most popular, and around 40% of its revenue now comes from outside China.  TechNode

Separated By 15 Minutes—and a Great Firewall: How Hong Kong and Shenzhen Are Drifting Apart Fortune

The U.S. Senate Passed 2 Bills Supporting Hong Kong Protesters. But They Might Do More Harm Than Good Fortune

Two Thirds of China's Executives Would Rather IPO at Home Than in the U.S. Fortune

Kissinger Says U.S. and China in 'Foothills of a Cold War' Bloomberg

The U.S. Justice Department charged a Chinese national who worked at Monsanto with stealing trade secrets for China. Haitao Xiang was stopped at a U.S. airport on the way back to China, and is currently being held in jail in Illinois. Authorities said Xiang was carrying proprietary farming software back to China, and said he was encouraged to steal the software through his involvement in China's "Thousand Talents Plan," a scientific researcher recruitment program that U.S. officials have called a threat to U.S. national security. Reuters

Hong Kong's district council elections are scheduled for Sunday amid the months-long protests and an ongoing university campus standoff that amount to the worst political unrest the city has seen since the 1997 handover. More than 4 million registered voters will cast their ballots in what is shaping up to be a de facto referendum on support for the protests—with most politicians falling into pro-Beijing or pro-democracy camps—and all 452 district council seats are being contested for the first time ever. Riot police will be stationed at all 600 polling locations on election day—a first for the embattled city. CNN

Simon Cheng, a former U.K. consulate staffer in Hong Kong who was detained by Chinese authorities in August, made headlines on Wednesday with a Facebook post and media interviews alleging that he was tortured during his 15-day detention in China. Chinese state media responded on Thursday by releasing a video that appeared to show Cheng in a massage parlor, where authorities said he solicited prostitutes. The video also included a "confession" that an expert on forced confessions said had "no validity of any kind." The British government is currently working to bring Cheng and his family to the U.K. Hong Kong Free Press