The U.S. Senate Passed 2 Bills Supporting Hong Kong Protesters. But They Might Do More Harm Than Good 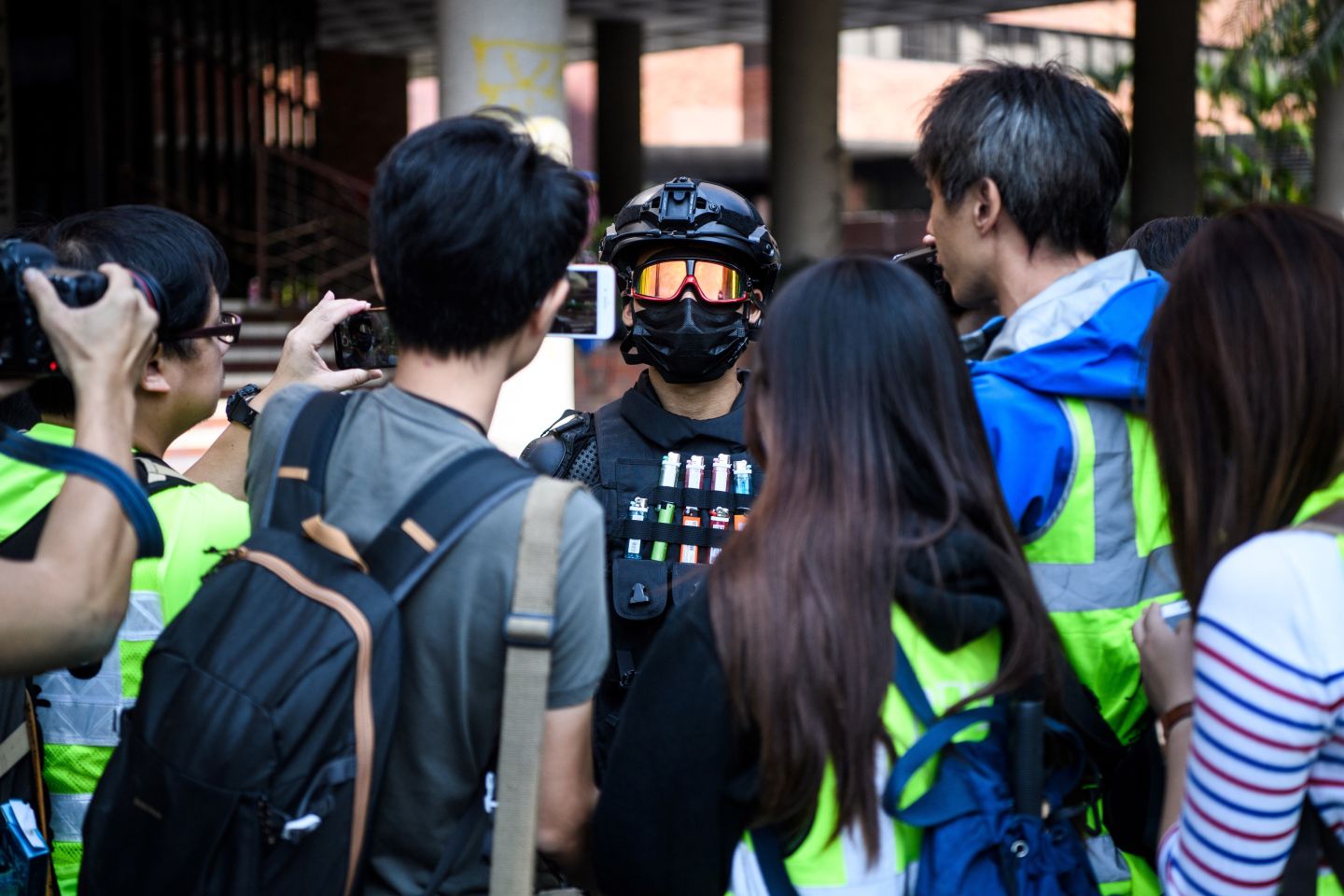 TOPSHOT - A male protester (C), who gave his age as 16, speaks to the media at the campus of the Hong Kong Polytechnic University in the Hung Hom district of Hong Kong on November 20, 2019. - Dozens of pro-democracy protesters remained holed up inside the besieged Hong Kong university campus for a fourth straight day on November 20 as supporters took up online calls to disrupt the citys train network in a bid to distract police. (Photo by Anthony WALLACE / AFP) (Photo by ANTHONY WALLACE/AFP via Getty Images)
ANTHONY WALLACE—AFP via Getty Images

The U.S. Senate passed two acts on Tuesday that will put greater scrutiny on democratic freedoms in Hong Kong, where months-long protests continue unabated and a tense standoff between police and protesters trapped inside a university campus stretched into its fourth day.

The bills could also have unintended negative consequences on a potential U.S.-China trade deal and on American businesses in the special administrative region, and Hong Kong’s stock market slumped Wednesday amid worries about those effects and the continued violence.

On Tuesday afternoon, the Senate passed—via unanimous voice vote—the Hong Kong Human Rights and Democracy Act. The act declares U.S. support for protesters in Hong Kong and, if signed into law, gives the U.S. license to introduce sanctions and take other diplomatic action if it finds the semiautonomous Chinese city not sufficiently autonomous.

The Protect Hong Kong Act also passed unanimously, and bans U.S. companies from exporting tear gas, rubber bullets, pepper spray, and other crowd control equipment to Hong Kong, where police have stepped up their use of force since the protests began in June.

Congressional backing for the measures was spurred by a weekend escalation in violence at the Hong Kong Polytechnic University, where scores of protesters—including at least 200 minors—holed up in what began as an occupation and turned into a siege when police surrounded the castle-like campus and fired tear gas and rubber bullets at people trying to escape.

“The violence perpetrated by the authorities in Hong Kong, and by extension Beijing, are turning the city into a battlefield. That’s why the United States should and must act today […] Let us work to hold China accountable for the erosion of democracy in Hong Kong,” Menendez said shortly before the HKHRDA passed.

Protesters staged rallies in support of the act and high-profile figures like Joshua Wong travelled to the U.S. to discuss it with legislators. Many protesters see the HKHRDA as an important signal of international support, says Alfred Wu, an associate professor at the National University of Singapore who researches governance and fiscal relations in Greater China.

“Moral support, to them, is essential,” Wu says. “But Hong Kong’s so-called free port status and […] independent customs region actually is at stake because of the Human Rights and Democracy Act.”

The protests started five months ago to oppose a now-withdrawn bill that would have allowed extradition to China, which many in Hong Kong saw as an infringement on the “one country, two systems” framework that is supposed to last until at least 2047.

It is this separation that justifies Hong Kong’s special trade arrangement with the U.S., which grants it a distinct status that exempts it from tariffs and other restrictions placed on China. Under the HKHRDA, the U.S. government will conduct an annual review to determine whether Hong Kong remains sufficiently autonomous to justify the status.

A loss of Hong Kong’s special status could prompt multinational firms to relocate to other Asian cities like Singapore or Tokyo, Wu says.

The bill could also lead to “unintended, counter-productive consequences” for U.S. business interests in the region, the American Chamber of Commerce in Hong Kong said in a Wednesday statement.

Even if the city’s trade status is not revoked, anything that diminishes or seems to diminish Hong Kong’s autonomy will “damage Hong Kong’s role as an international business center,” AmCham said.

“We believe that as Hong Kong provides a unique place in the world supporting free trade and connectivity under one country, two systems, the city is just too special to fail,” the AmCham statement said.

The Hong Kong government is acutely aware of this too. It released a statement on Wednesday calling the U.S. acts “unnecessary and unwarranted,” but focused heavily on Hong Kong’s importance to U.S. and international economic interests.

It pointed out that there are 1,344 U.S. companies in Hong Kong, 278 of which are regional headquarters, and around 85,000 U.S. citizens live there. Hong Kong also represents the U.S.’s largest bilateral trade surplus in the world, with a surplus of over $33 billion in 2018.

“Any unilateral change of U.S. economic and trade policy towards Hong Kong will create negative impact on the relations between the two sides as well as U.S.’s own interests,” the statement said.

“The U.S. should immediately stop interfering in Hong Kong affairs and China’s other internal affairs, or the negative consequences will boomerang on itself,” Geng Shuang, a spokesperson for China’s foreign ministry, said on Wednesday.

“China will have to take strong countermeasures to defend our national sovereignty, security and development interests if the U.S. insists on making the wrong decisions,” he added.

The bill’s passage through the Senate has weighed on risk sentiment, according to Elsa Lignos, global head of FX strategy at RBC Capital Markets.

Optimism around a “phase one” U.S.-China trade deal has waxed and waned for weeks, but stocks in Hong Kong and China ended lower on Wednesday amid worries that President Donald Trump will sign the HKHRDA into law, which could sabotage a potential deal. Hong Kong’s Hang Seng Index dropped more than 1% Wednesday morning, before closing down 0.75%.

The HKHRDA will now return to the House of Representatives, where a version of it passed in October. The congressional chambers will agree on a final version that will land on Trump’s desk. The president has the power to sign the bill into law or veto it.

An anonymous U.S. official told Reuters that if the bill reaches Trump, there will likely be an “intense debate” between aides who want to take a hard line on China and human rights and others who are concerned that it could threaten the U.S. and China’s already-tenuous trade negotiations.