After Record Floods, Venice Assesses the Damage and Braces for More Climate-Related Disasters 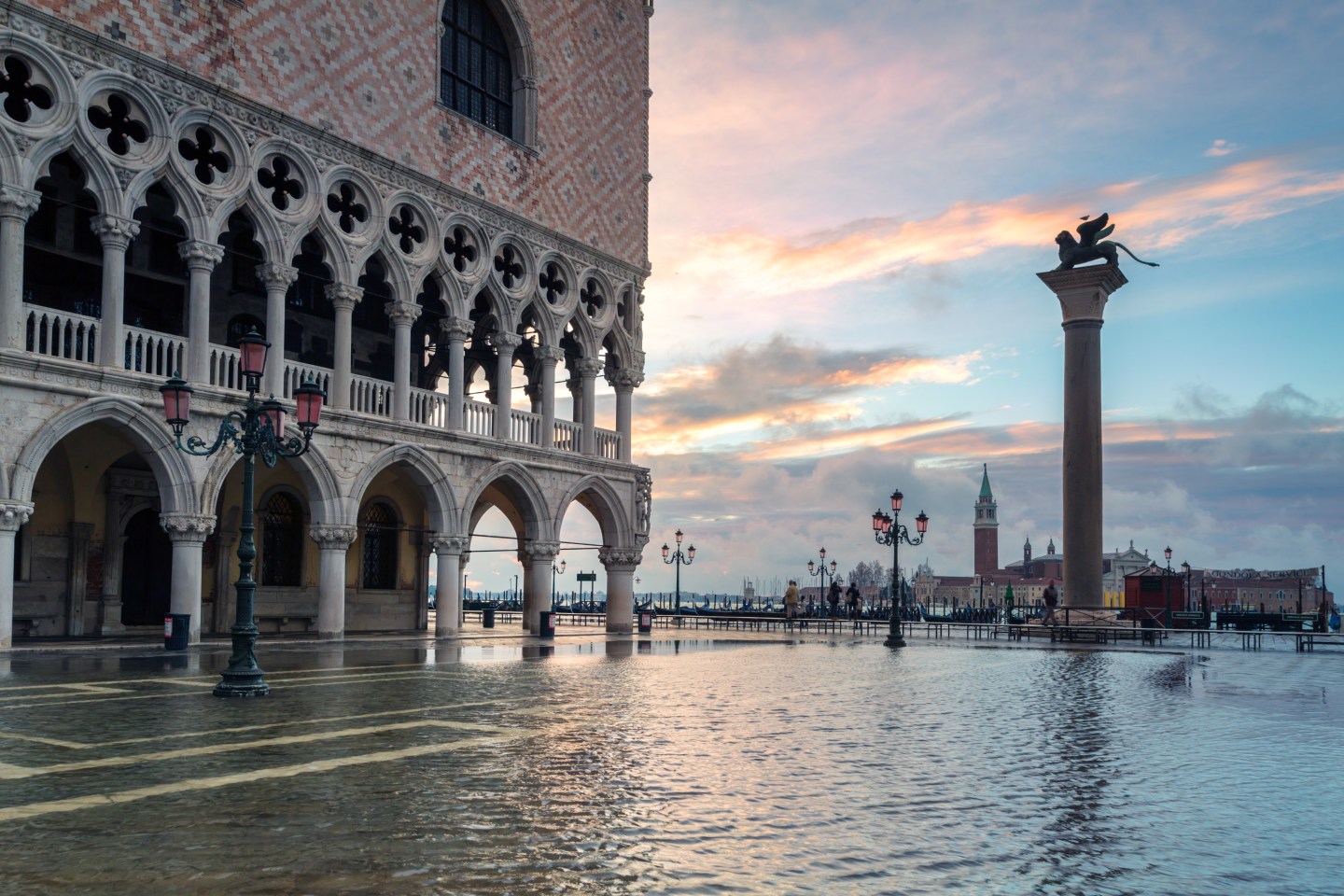 Anna Palandri was still wearing her rubber, knee-high fishing boots as she surveyed the damage to her restaurant, Paradiso Perduto. The restaurant is a vibrant canal-facing hotspot in the Cannareggio neighborhood where, on normal days, locals and tourists cram side-by-side to eat princely meals of grilled fish and spaghetti alle vongole.

One night a week, they clear out the tables for live music. Among the bigger names that have jammed there, according to the website, are Keith Richards and the jazz musician Henry Cook.

The name of the restaurant, which translates to “Paradise Lost,” was never meant to be taken literally.

Sloshing around the place on Thursday, Palandri said the floods that had battered Italy’s famed canal city in recent days caught everyone off guard.

“We’ve all been through many floods, and we know what to do,” Palandri, a native of Venice who took over the 40-year-old restaurant only in August, told Fortune. “At the start, flood waters are always calmer and then it gets rougher near the end. This time around, it started rough and so we thought it was nearly done. But the water kept rising.”

When the flooding began, the Italian weather service estimated it would reach 125 centimeters (a little over four feet). Paradiso Perduto, like many Venice businesses, has installed all kinds of precautions to withstand the flood waters that harass the city from time to time. Paradiso Perduto is safe as long as the surge is under 150 centimeters. “When we closed Monday night, we put everything on table tops just to be safe,” she said. “I figured we’d be okay even if it rose to 160 centimeters.”

Things turned out much differently. By Tuesday, the water rose to its highest level in 53 years: to 1.87 meters (around 74 inches). Water burst through flood protection barriers, submerging almost all of Venice’s 118 islands. In the end, three-quarters of the city was underwater at one point, bringing, in the words of mayor Luigi Brugnaro, “the city to its knees.”

At least two people died in the flooding, one from drowning and one from electrocution. In St. Mark’s Basilica, the famed church’s floors were flooded. Water pressure broke through heavy glass barriers, flooding the church’s crypt. Engineers are worried prolonged exposure to flood water could put the structure of the 927-year-old Byzantine-style cathedral at risk.

Many vaporetti (the water buses used to get around the lagoon city) either sunk or were severely damaged after washing up onto land. At the landmark Gritti Palace hotel, along the Grand Canal, a waterfall inundated the lobby, forcing guests to rush for higher floors.

A short walk away from the Gritti Palace is La Fenice, the famous opera house that’s hosted world premieres from maestros including Rossini, Bellini, and Verdi over the years. It was named for the mythic bird—the phoenix—that rose from the ashes. Three different fires devastated the famous concert hall in three different centuries. It will be put to the test again after flood waters threatened the grand structure this week, possibly putting the upcoming opera season in doubt.

Earlier this year, Venice earned headlines when it unveiled a plan to charge day-trippers an entry fee, starting with the high tourist season next year. The city is also looking to protect its fragile lagoon by rerouting the massive cruise ships that dwarf the city’s palaces and bridges, to plot an alternative, far less scenic route to the docks.

But the biggest challenge for the city, which the Romantic-era poet Percy Bysshe Shelley described as being “like fabrics of enchantment piled to heaven,” comes from the increasingly frequent extreme weather.

There is a plan to protect the city. It’s called “Mose,” which is the Italian name for the biblical figure Moses, as well as an Italian acronym for “Experimental Electromechanical Module.” Mose—an $8 billion project that has suffered through delays and cost overruns since it was first drawn up in 1987—will use a network of submerged gates that will rise up to block off the lagoon at three key junctures. In theory, it should protect the city from floods of up to 300 centimeters, or roughly ten feet. It is expected to come online in 2022, though political leaders have said this week that should be moved forward.

In an interview with Fortune, Giuseppe Passoni, a professor of environmental and land planning at the Polytechnical University of Milan, called Mose the “last, best chance” to save the iconic city. But environmental groups worry Mose will suffocate the Venice lagoon, killing off fish and bird species that live there.

Meanwhile, small business owners like Paradiso Perduto’s Palandri are focused on more immediate problems. When open, her restaurant focuses on simple, traditional meals. They make their own pasta and don’t even have a wine list. Instead, they serve patrons from barrels. On Thursday, her kitchen equipment was still too wet to plug into electric outlets.

If major pieces of equipment like refrigerators and her fryer don’t work, she estimates costs could surpass $15,000. But remaining closed to customers could prove to be an even bigger blow.

“We aren’t earning any money, but we still have to pay rent,” she said. Asked if there was anything that made her hopeful, Palandri thought for a moment and then responded: “Yes. Our pasta machine and oven were high up. At least I know they survived.”

—Climate change is hitting insurance hard: How Swiss Re is adapting
—Energy companies say the oil glut—and shrinking profits—aren’t over
—Innovative tech offers a solution to aircraft pollution
—Give or take a trillion, banks haggle over IPO valuation of Saudi Aramco
—The Future 50 sustainability all stars
Subscribe to The Loop, a weekly look at energy, tech, and sustainability.