Separated by 15 Minutes—and a Great Firewall: How Hong Kong and Shenzhen Are Drifting Apart 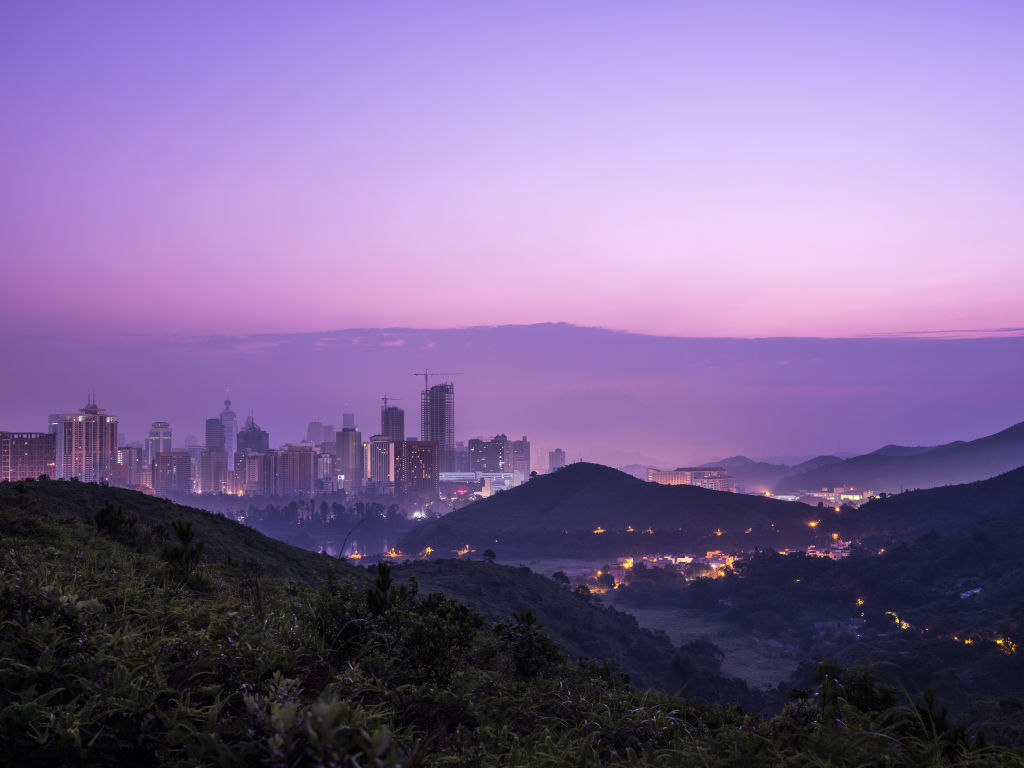 Buildings stand illuminated at dawn in Shenzhen beyond hills in the Ma Tso Lung district of Hong Kong, China, on Monday, Sept. 9, 2019. Hong Kong's waning allure for ambitious mainland Chinese is symbolic of the shifting balance of power and opportunities between the city and its neighbour Shenzhen. Where Hong Kong is a former colony whose historic role as a trading hub and gateway to China is fading, Shenzhen is young, hopeful and looks optimistically toward a future where it can help drive Chinas push to dominate the next century through an innovative economy that sidesteps political freedoms. Photographer: Justin Chin/Bloomberg via Getty Images
Justin Chin—Bloomberg via Getty Images

A high-speed rail line that opened late last year reduced the travel time between the central business districts of Hong Kong and Shenzhen to just 15 minutes. But last week if you rode that train it might have felt like you were moving between different worlds.

In Hong Kong, just minutes from the Hung Hom train station, students were locked in pitched battles with police, with tear gas and conflict spilling out into the city’s densely-packed streets. In Shenzhen, meanwhile, there was no hint of tumult. Passengers emerged from the train into a calm and gleaming metropolis of new office buildings, pristine parks, and bustling shopping plazas. Some decamped for China’s largest tech fair, which Shenzhen hosted last week.

Since 1997, Hong Kong has provided China with a gateway to the world as a global financial hub with relative autonomy under a policy called ‘One Country, Two Systems.’ Its importance to China, however, has rapidly diminished amidst China’s rise. Shenzhen, China’s booming new technology hub, now boasts a GDP that exceeds Hong Kong’s.

Residents of Shenzhen are young, receptive to the latest technological advances and communicate in Mandarin, reflecting the fact that so many are recent arrivals from the rest of China. Hong Kong is aging, and its people are generally suspicious that new technologies from China’s mainland threaten traditions of democracy and privacy bequeathed them under British colonial rule. And while many Hong Kongers can speak English and Mandarin, the preferred dialect is Cantonese.

The cultural and linguistic divide between the two cities is increasingly felt in the airwaves. Residents of Hong Kong remain free to access Google, Facebook, Twitter, Instagram, Amazon and global news and information channels available outside China. Those sites and apps are are blocked in Shenzhen due to China’s Great Firewall, and so the city’s residents rely on a completely different set of homegrown apps and websites. The two cities exist in almost completely separate technological realms.

“The entire online ecosystem is just so crazily different. Every time I cross the border, my entire life changes,” said Zach Bielak, co-founder of the start-up One Bag Tag, which has offices in Shenzhen. “The SIM card I use, the payment system. It’s like crossing into a new country.”

Life in Shenzhen now revolves around smartphones and advanced consumer-driven technologies. And as the city has become China’s ‘Silicon Valley,’ technological progress there happens at hyper speed compared to the rest of China: cashless payments, facial recognition, and artificial intelligence are not only ubiquitous but integrated into the fabric of daily life.

In Hong Kong, long a far more prosperous and advanced neighbor, technological progress in recent years—especially in the consumer sphere—has been relatively slow.

Ethan Bergerson, a tech worker who has worked between Hong Kong and Shenzhen for several years, says Hong Kong is “stuck in the past” in terms of technology. “You see people using cash, you see regular businesses that are not technology oriented,” he said. But just a few minutes away, the heightened adoption of cutting edge technology is clear “the second you come to Shenzhen,” Bergerson said. “You see it immediately.”

The Chinese government has long been working on a Greater Bay Area plan to integrate Hong Kong with Shenzhen and other cities in the region. But as smartphones and connected devices play a growing role in shaping the lives of those cities’ residents, technology may be adding to the figurative distance between them.

From shanzhai to Shenzhen speed

In the last several decades, Shenzhen has gone from a small, fishing city of 30,000 to a global center of technological innovation with over 12 million residents. This has happened, in large part, due to a mix of preferential government policies, China’s economic opening and global rise, and the city’s unique spirit.

Beginning in the 1970’s, rich Hong Kong tycoons helped convert Shenzhen into a manufacturing center, as Hong Kong companies contributed to the construction of a shipping terminal and took advantage of the city’s cheap labor supply.

This development paved the way in 1980 for then-President Deng Xiaoping to label Shenzhen a Special Economic Zone (SEZ), granting the city privileged economic status for foreign trade and investment. Shenzhen and nearby Dongguan then became manufacturing hubs with factories sending goods all over the world.

“It wasn’t that long ago that Shenzhen was just a fishing village, and Hong Kong was the prosperous one across the water,” said Brian Tang, founder of ACMI and LITE Lab@HKU in Hong Kong. “People who have been here long enough marvel at the rate it has grown.”

Many would deride Shenzhen’s initial development as shanzhai, a Chinese term derogatorily used to refer to illegally-produced cheap imitation goods and knock-offs. While Shenzhen produced its fair share of shanzai goods, that stage of its history may have also instilled the innovative spirit that today has helped the city succeed.

“[Shenzhen was] very innovative because they were mixing and matching,” said Tang. “Shenzhen developed an ecosystem, especially in hardware, where a lot of the factories were formally or informally linked, and that led to a lot of innovation.”

Proximity to these factories made Shenzhen a ripe place for technology startups to grow and flourish. Many of China’s largest technology giants—including telecommunications firms like Huawei and ZTE, the social media firm Tencent, and the world’s largest gene-sequencing company BGI—all trace their roots to the city.

With ‘Shenzhen speed’ or the idea that the city brings a product from development to execution in record time, the city has continued to boom, becoming a hub for startups, investors, and tech workers from across China.

“There’s nothing like it,” said Bielak. “In the developing stages of a product, you can find anything, and get it all within one day. A miracle story.”

This innovation has also led the city to quickly adopt emerging technologies. Bergerson says that at some Shenzhen offices, facial recognition cameras scan faces of employees to bypass security, automatically open elevator doors, and take them to the floors they work on.

From innovation to skepticism

Hong Kong, on the other hand, was once a global leader in consumer-driven technological innovation, yet today has been far slower to adopt newer technologies like cashless payments, and is increasingly defiant to ones like facial recognition.

In September 1997, Hong Kong’s subway line—the MTR corporation—launched the Octopus card, a subway card embedded with an automatic payment system. At the time this was groundbreaking technology, and it became indispensable to life in Hong Kong as it spread across the city with thousands of stores adopting Octopus payment systems. Today, however, even in the age of cashless payment systems and facial recognition on subways, the Octopus still reigns supreme.

While Hong Kong was once at the forefront of rolling consumer technologies, the city failed to innovate on the same level as its rising neighbor. This is because, Tang explained, Hong Kong has generally concentrated its efforts at innovation on sectors outside the consumer sphere: “Hong Kong’s traditional strength is linking the world to China, and vice versa, especially in financial services.”

Indeed, Hong Kong’s strength lies in its financial industry, and for all of the city’s recent unrest, it remains a critical financial link to the rest of the world. So rather than focusing on consumers, the city’s technological innovation has been geared towards its banks and financial technology, even hosting a fintech conference last week.

For hardware, however, Hong Kong simply cannot compete with Shenzhen. In 2006, Frank Wang famously founded a drone company called DJI from his bedroom at the Hong Kong University of Science and Technology. Yet instead of remaining in Hong Kong, Wang chose to build his business in Shenzhen where it quickly emerged as the world’s largest consumer drone company.

Alex Kwong, head of Hong Kong University of Science and Technology’s Technology Transfer Center, believes that software startups can still succeed in Hong Kong: “The free flow of currencies [in Hong Kong] is an advantage and helps startups attract international investors to go to the international market.”

On a consumer level, Hong Kongers are hardly luddites. The city boasts an even higher level of smartphone users, at roughly 75% of the population, than in the Mainland, according to Hong Kong’s government.

But in recent months, protesters have shown that for Hong Kong, a march to technological innovation is also cause for concern. They have gone to great lengths to protect their privacy using encrypted messaging apps, and even smashed facial recognition cameras on the city’s streets.

Ultimately, the greatest difference may be that residents of the two cities simply do not share any common virtual space. China’s mainland has Wechat, Didi Chuxing (ride-hailing), and Dianping (food delivery), while Hong Kong has WhatsApp, Uber, and Deliveroo.

This barrier is so strong that Hong Kong protesters have had to rely on Apple’s Airdrop feature to pass messages to Mainland visitors. So while people in Shenzhen and Hong Kong share nearly the exact same land, the two cities are virtually drifting farther apart.