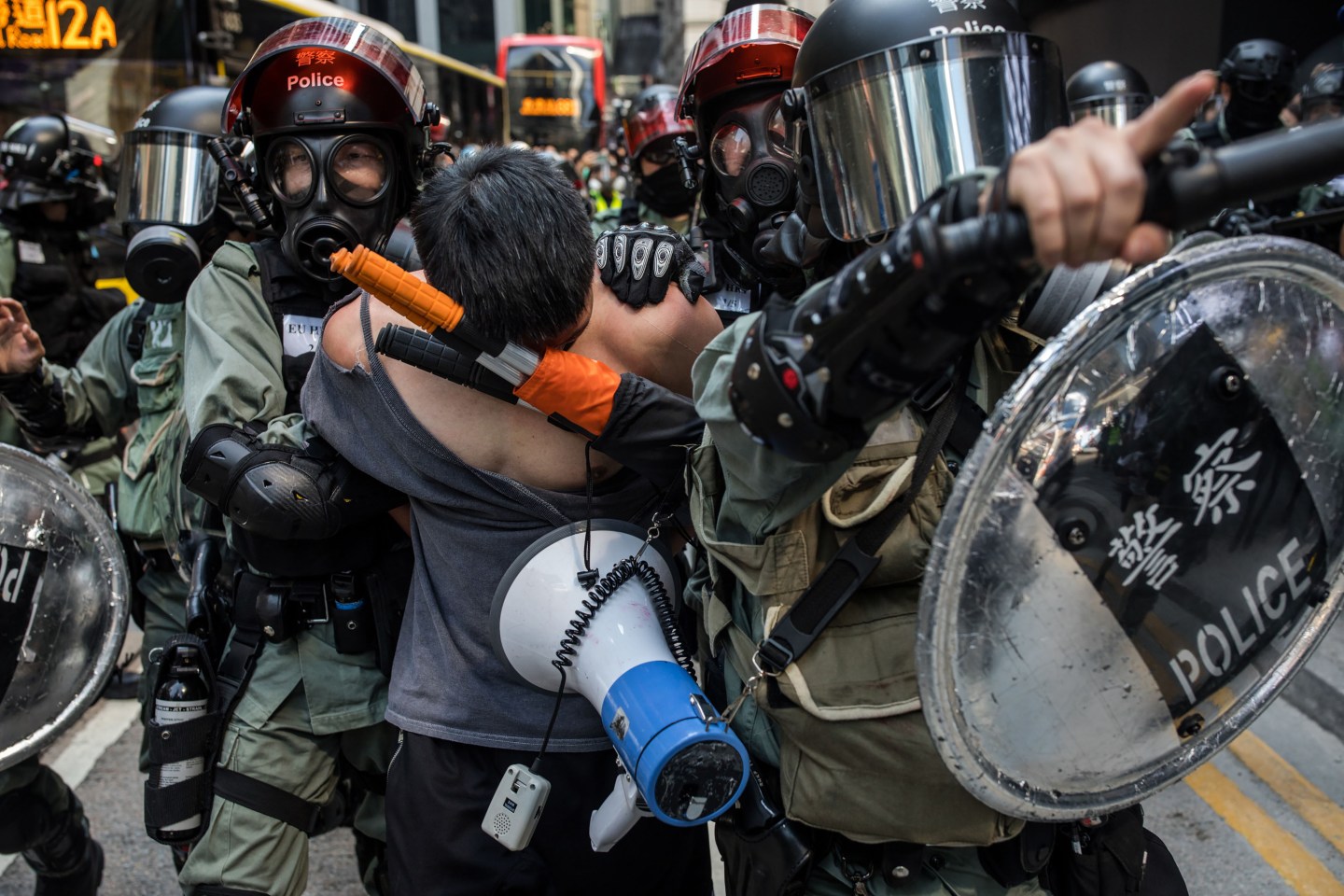 A man is led away by the police during a protest in the Central district of Hong Kong, China, on Monday, Nov. 11, 2019. A Hong Kong protester was in critical condition after being shot by a police officer, as the financial hub reeled from citywide efforts to disrupt the work week amid worsening political unrest. Photographer: Nicole Tung/Bloomberg via Getty Images
Nicole Tung—Bloomberg via Getty Images

Hong Kong stocks fell the most since early August as protests escalated after police shot and wounded a protester on Monday morning.

The Hang Seng Index dropped 2.6%, with local landlords plummeting. Police fired tear gas in the center of the business district to disperse chanting office workers who were blocking roads. Signs that optimism over a potential U.S.-China trade deal has been overdone added to the bearish sentiment. The MSCI Hong Kong Index slumped 2.9% and the local dollar weakened.

The abrupt drop in the city’s stocks — the worst in Asia — follows a half trillion dollar rally that drove a measure of buying momentum to its highest level in almost nine months and pushed the Hang Seng Index above its 200-day moving average.

The shooting came as protesters called for a city-wide strike following the death of a student who fell from a parking garage amid a police dispersal operation. The city’s railway operator suspended parts of some lines amid mass vandalism and universities canceled classes. Police had earlier said two protesters were shot.

“Hong Kong safety is now a big question,” said Jackson Wong, asset management director at Amber Hill Capital. “Some people are worried that today’s event would escalate the protest. There’s also conflicting messages from the U.S. and China over the trade deal. Last week people were pricing in a successful deal.”

The local dollar fell 0.04% to 7.8334 per greenback after its best week since mid-September. That’s even as a gauge tracking the demand for cash jumped to the highest level since early 2016. The currency’s three-month forward points surged to 75.

Concern is also rising that Hong Kong’s bleak economic situation has yet to fully filter through to its stocks. Faced with its worst business outlook since the 2008 financial crisis and a plunge into recession, a chill may be coming for Hong Kong’s corporate earnings. He Qi, a fund manager with Huatai Pinebridge Fund Management Co. who called the rally in mid-August, says he’s preparing to sell.

“Hong Kong’s gains are just part of a global risk-on rally amid a flood of liquidity, and the short-term gains are way too strong,” said He.

While President Donald Trump said late last week that trade talks with China were moving along “very nicely,” he added that reports about how much the U.S. was ready to roll back tariffs on China were “incorrect.” Those reports had helped fuel the risk-on rally that sent a gauge of global stocks to its highest level since early 2018.

China’s largest brokerage Citic Securities Co. earlier this month trimmed its earnings growth forecast on the Hang Seng gauge to 4% this year from a previous estimate of as much as 8%. The continuing protests in the city and the impact on commercial property, retail and tourism industries has gone beyond expectations, strategists led by Yang Lingxiu wrote in a note dated Nov. 4.

City workers and tourists ran into shopping malls and office lobbies after riot police fired rounds of tear gas in the heart of the Central business district, just blocks from the stock exchange.

To be sure, traders can still find opportunities in a market where many firms rely on the mainland for earnings. China’s A shares are about 28% more expensive than their Hong Kong listed peers, compared with a long-term average of 20%.

The recession will likely make its presence felt in earnings for this year and in the first quarter of 2020, said Ken Chen, a Shanghai-based strategist with KGI Securities Co.

“There’s no end in sight to the local unrest and expectations of an economic recovery next year remain low,” he said. “Hong Kong is just rising along with global markets, and the gains will pause when the global rally weakens.”

—Energy companies say the oil glut—and shrinking profits—aren’t over
—Give or take a trillion, banks haggle over IPO valuation of Saudi Aramco
—China launching its 5G ahead of schedule on a spectrum the U.S. can’t match
—Why China’s digital currency is a “wake-up call” for the U.S.
—Fintechs TransferWise and GoCardless team up
Catch up with Data Sheet, Fortune’s daily digest on the business of tech.