Why China’s Digital Currency Is a ‘Wake-Up Call’ for the U.S. 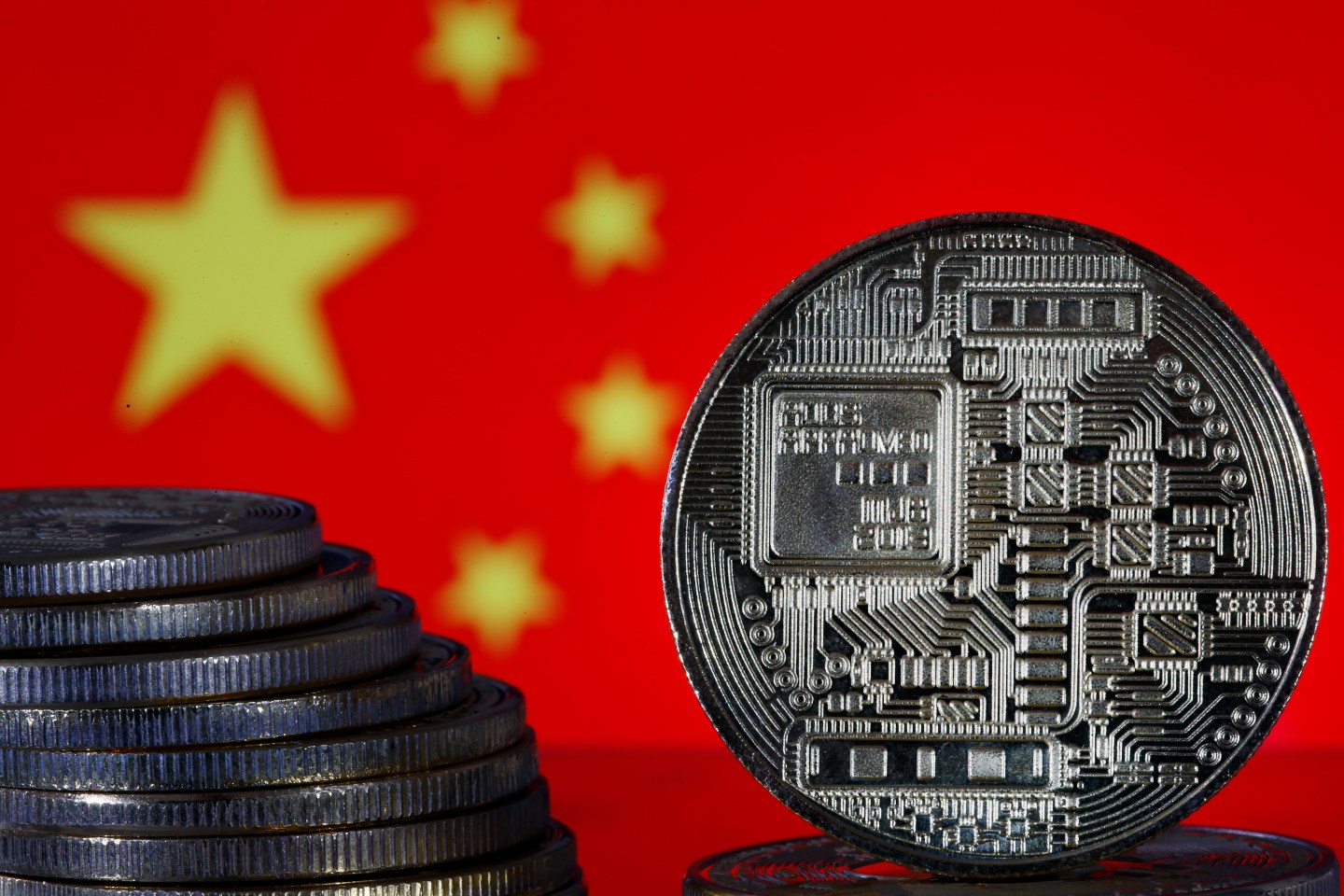 PARIS, FRANCE - OCTOBER 17: In this photo illustration, a visual representation of digital cryptocurrency coins sit on display in front of a Chinese flag on October 17, 2019 in Paris, France. China is preparing to launch its sovereign cryptocurrency with 5 banks, Alibaba and Tencent. Chinese authorities are stepping up preparations for their own virtual currency as Facebook promises to revolutionize payments with its virtual currency called 'libra'. No date has been set, but media speculate on a launch from November 11, 'feast of singles' the day of shopping frenzy online in China. (Photo by Chesnot/Getty Images)
Chesnot—Getty Images

China’s central bank may launch its own digital currency in the next 18 months amid strong endorsements of blockchain from the highest levels of government, signaling a desire for China to be self-reliant and globally competitive and adding another dimension to the growing U.S.-China tech rivalry.

“China is making these very large macro plays,” says Mike Wasyl, managing partner at DeerCreek, a corporate strategy firm that specializes in fintech and works with blockchain companies across Asia-Pacific and the U.S. “They want to maintain control and be seen as leaders and so adopting blockchain and being public about it, as we saw recently, is going to stir a lot of interest.”

Blockchain technology underpins digital currencies, and also has applications in smart manufacturing, supply chain management, and the Internet of Things.

Chinese President Xi Jinping threw his support behind the development of blockchain in at a Politburo study session in late October. He didn’t mention digital currencies in the study session, but that did not prevent stocks in Bitcoin and other cryptocurrencies, and a total of almost 200 blockchain-investing companies, to surge after his endorsement.

The People’s Bank of China (PBOC), the central bank, has been researching a digital currency since 2014 but recently accelerated its efforts in response to Facebook’s proposed digital currency Libra, a platform-based payment service backed by a basket of currencies weighted towards the U.S. dollar.

A PBOC-issued digital currency would let the government retain control of the money supply and monitor and regulate capital distribution. It would also function as a safeguard against a border-hopping Libra, which lies outside government regulation and which would struggle to gain traction if the PBOC currency, “DCEP” (digital currency electronic payment), was already in widespread use.

China has the advantage of already having a huge digital payment ecosystem—Tencent’s WeChat Pay has over a billion users and Alibaba’s Alipay has 1.2 billion—which will make it easier to adapt to the DCEP.

“China’s just making a giant move forward in trying to come out with their central bank digital currency first,” Wasyl says. “It’ll definitely send messages to the world that this is kind of the new paradigm.”

The DCEP would replace paper money and coinage and thereby improve efficiency, reduce operational expenses, and allow the government to easily track the flow of money, says Wasyl. It would also be highly centralized and tightly controlled—a totally different beast from the decentralized, utopian founding visions of cryptocurrencies like Bitcoin (both are digital currencies, but the DCEP is not a cryptocurrency).

Li Chen, who researches China’s financial development and government regulation at the Chinese University of Hong Kong, says the Chinese government’s attitude toward blockchain-powered technology, especially digital currencies, can be characterized by a “two-pronged approach” of permissiveness and caution.

“On the one hand we have seen coordinated efforts in clamping down on private cryptocurrencies and exchanges, but on the other hand we see a lot of commitment and initiatives trying to spearhead and encourage technological innovations in blockchain technologies,” Li says.

The apparent contradiction arises from the government’s keen interest in the potential of blockchain-powered technology and its aversion to decentralized, uncontrollable e-currencies, which led the government to essentially outlaw private cryptocurrencies in 2017 over concerns around money laundering and volatile financial speculation.

At the same time, says Li, policymakers in China have seen firsthand the unanticipated and “transformative power” of mobile payment services, which arose out of private sector innovation and completely changed consumer behavior and the financial services sector.

Given this context, Li says, he expects the government to encourage development in blockchain-powered technology “as far as [developers] remain in these parameters set by the state in terms of the direction of innovation.”

Wong sees the U.S. as “the technological hub of blockchain,” especially cryptocurrencies, and says development there has a significant worldwide impact on the industry.

Today, however, the U.S. government concentrates its efforts on crafting regulation and ensuring compliance, says Wasyl, who is based in New York, when it would be better served by offering more support to blockchain and digital currency innovation—by, for example, funding innovation sandboxes, and giving “a little more slack to allow some exploration.”

“If we’re not early to the game on some of these technologies we’re going to have a hard time—not playing catch up, but a hard time to regulate our way into innovation.” Wasyl says. “We have to move our consumers towards a more digitally native economy and we have to keep up with that trend.”

Wasyl says Libra has made space for a larger conversation in the U.S. about a national digital currency, which he says he thinks “will be an inevitability.” He says the government “probably should consider how a central bank currency in the U.S. might look.”

One of Facebook founder Mark Zuckerberg’s main arguments for Libra at his rocky congressional hearing was that China would develop digital currency before the U.S. and replace the U.S. dollar as the dominant global currency—an argument some have criticized as a false dilemma.

“I don’t think [renminbi] or Chinese digital currency can replace U.S. dollars in the global financial system in the foreseeable future. That is not going to happen.” Li says.

Wasyl has a similar interpretation. “I think still the U.S. dollar is fairly in the lead, but it’s definitely a wake-up call to governments of the world, including the U.S., to keep a closer eye on the digital transformation of money,” he says. “I think the days of going into banks and opening accounts—I think that’s going to be over in five, seven years, probably even sooner.

“Western powers, including the United States, need to take very seriously the movement of money to a digital format, […] because once that gets traction, it’ll be gradually, and then all at once.”

—China’s unicorns have overtaken the herd in the U.S.
—Has the trade war actually hurt tech?
—Google and NASA claimed quantum supremacy, but China’s not far behind
—The U.S. tech world is watching China’s advances in A.I. warily
—China’s 5G is ahead of schedule, on a spectrum the U.S. can’t match
Catch up with Data Sheet, Fortune’s daily digest on the business of tech.