From Luxury Watches to Broiler Hens, Companies Around the Globe Say Hong Kong Protests Are Hurting Them 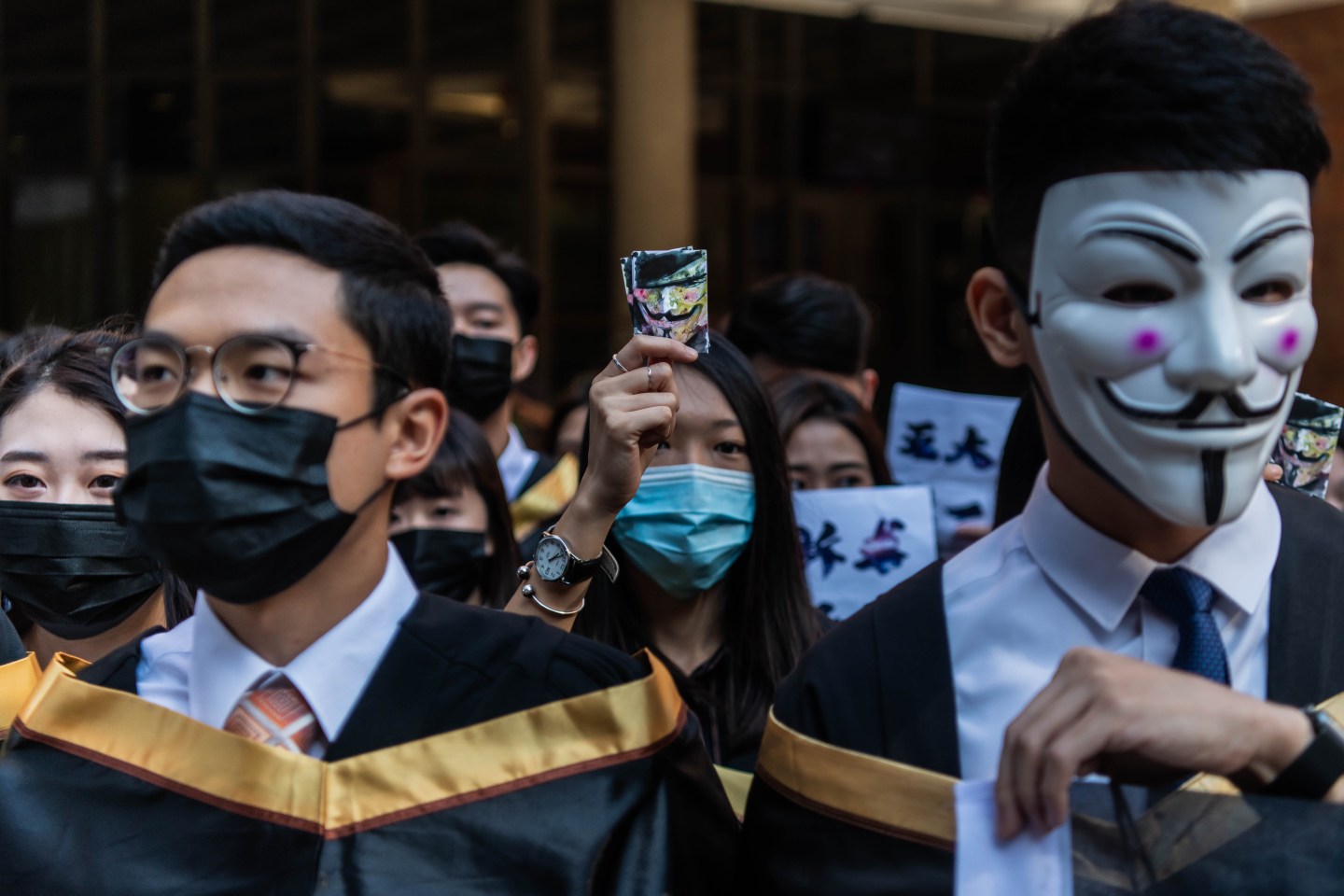 HONG KONG, CHINA - NOVEMBER 05: University students wearing Guy Fawkes masks march before their graduation ceremony at the Hong Kong Polytechnic University on November 05, 2019 in Hong Kong, China. Hong Kong slipped into a technical recession on Thursday after anti-government demonstrations stretched into its fifth month while protesters continue to call for Hong Kong's Chief Executive Carrie Lam to meet their remaining demands since the controversial extradition bill was withdrawn, which includes an independent inquiry into police brutality, the retraction of the word "riot" to describe the rallies, and genuine universal suffrage. (Photo by Billy H.C. Kwok/Getty Images)
Billy H.C. Kwok—Getty Images

Whether they sell luxury watches from Switzerland or farm hens from Mississippi, a surprising concern is occupying a number of corporate executives this earnings season: Hong Kong’s protests.

An A.I. model trained by Bloomberg News to scour thousands of quarterly analyst calls and investor updates revealed that the city’s pro-democracy demonstrations, which show few signs of resolution after five months, are pressuring companies that sell all kinds of consumer goods.

Of some 2,500 transcripts of calls held during the month of October, the A.I. model identified dozens of instances of protest-related discussion among businesses ranging from skincare products to talent recruitment.

The far-reaching impact of the protests speaks to the outsized role that Hong Kong has hitherto played as a thoroughfare for Chinese shoppers. Buyers have flocked to the city for its zero consumption tax and variety of global imports, whether luxury handbags or infant formula.

Now, the protests are accelerating a shift away from Hong Kong by global businesses as Chinese travelers — the city’s biggest tourist segment — stay away.

“Hong Kong has been extremely challenging [and] tourism has fallen off a cliff,” said Andre Hoffman, vice chairman of luxury skincare company L’Occitane, in a call on Oct. 22. “But we see very strong growth from China, Korea and Macau, so I think some of that business is being transferred to other countries in the region.”

Whatever the outcome of the protests, the blow to Hong Kong’s role as a consumption hub for the region is likely to be lasting, some executives said. The city’s economy has already been plunged into a technical recession and full-year growth is very likely to be negative.

Hong Kong’s business outlook continued to drop in October, with the purchasing manager’s index for the whole economy falling to 39.3, according to IHS Markit. The reading was the lowest since the depths of the financial crisis in November 2008.

“Business didn’t just arrive back at the doors as soon as the protest finished,” Paul Edgecliffe-Johnson, chief financial officer at InterContinental Hotels Group plc. said in a call on Oct. 18, referring to the Occupy Central protests of 2014. Those protests are widely seen as the precursor to this year’s movement.

“Hong Kong will probably pay a price for the current situation, not only in terms of volume of business, but also in terms of profitability,” said Jean-Jacques Guiony, chief financial officer of LVMH, the luxury conglomerate which sells everything from leather handbags to fur coats, in a conference call on Oct. 9.

Retailers and hotel operators have been hardest-hit as clashes between protesters and police bring the city to a near-halt every weekend. Retail sales by value fell 18.3% in September, compared with a decline of 22.9% in August. Hotel occupancy rates were 63% in September, 23 percentage points below the same period the year before, according to data from the Hong Kong Tourism Board.

The protests in Hong Kong “impacted traffic and caused some of our stores to close temporarily,” Harmit J Singh, chief financial officer of denim company Levi Strauss & Co, told analysts in a call on Oct. 8. Crocs Inc, a maker of rubber-like shoes, said its stores in the city were “significantly impacted by everything that’s going on there,” Andrew Rees, the company’s president and chief executive officer, told analysts in a call on Oct. 30.

Sales of products like medicine, baby food and other daily necessities have been hit by a drop in Chinese tourists who come to Hong Kong to buy goods for resale in the mainland — one of the many causes which demonstrators have taken up. Mainland arrivals to Hong Kong were down 35% in September compared with the same month a year earlier.

Industries away from the consumer front lines have also felt the heat. Recruitment consultancy PageGroup PLC said on Oct. 8 that social unrest in the city was having an impact on its clients’ confidence.

U.S. exports of broiler chickens have also been affected. “We have seen a little decline [in overall exports] to Hong Kong and I think some of the unrest there has been a big part of that,” Eric Scholer, vice president of Express Markets Analytics, told delegates at an investor day on Oct. 18 hosted by Sanderson Farms Inc, a Laurel, Mississippi-headquartered food producer.

Hong Kong’s property tycoons, whose grip on economic life and political power in the city of 7 million has been cited as a factor aggravating the protests, have been of little help to suffering retailers, the corporate call transcripts revealed.

“We’ve been very, very aggressive as much as we can be as a tenant in Hong Kong to try to get some rent reductions,” said L’Occitane’s Hoffmann. “Landlords have not been very forthcoming with a few exceptions. We will continue to engage with them to try and see what support they can give us, but it’s not been particularly effective at this point.”

Rents for high street locations in Hong Kong fell 10.5% in the third quarter, compared with three months earlier, the biggest contraction in more than two decades, according to real estate advisory CBRE Group Inc. But shopping mall rents were flat during the same period.

For analysts and investors who use the quarterly calls to prise information from executives, certainty on this particular topic was elusive.

“Really, we do not know how this is going to pan out for the rest of the year,” said Cindy Chow, chief executive of Mapletree North Asia Commercial Trust, in a call on Oct 29. The Singapore-based real estate investment trust generates almost 70% of its revenue from Hong Kong and owns a mall in the city which closed for three days during the ongoing unrest.

“It still doesn’t have any end in sight,” she said.

—Energy companies say the oil glut—and shrinking profits—aren’t over
—Give or take a trillion, banks haggle over IPO valuation of Saudi Aramco
—China launching its 5G ahead of schedule on a spectrum the U.S. can’t match
—Why China’s digital currency is a ‘wake-up call’ for the U.S.
—Europe is starting to declare its cloud independence
Catch up with Data Sheet, Fortune’s daily digest on the business of tech.