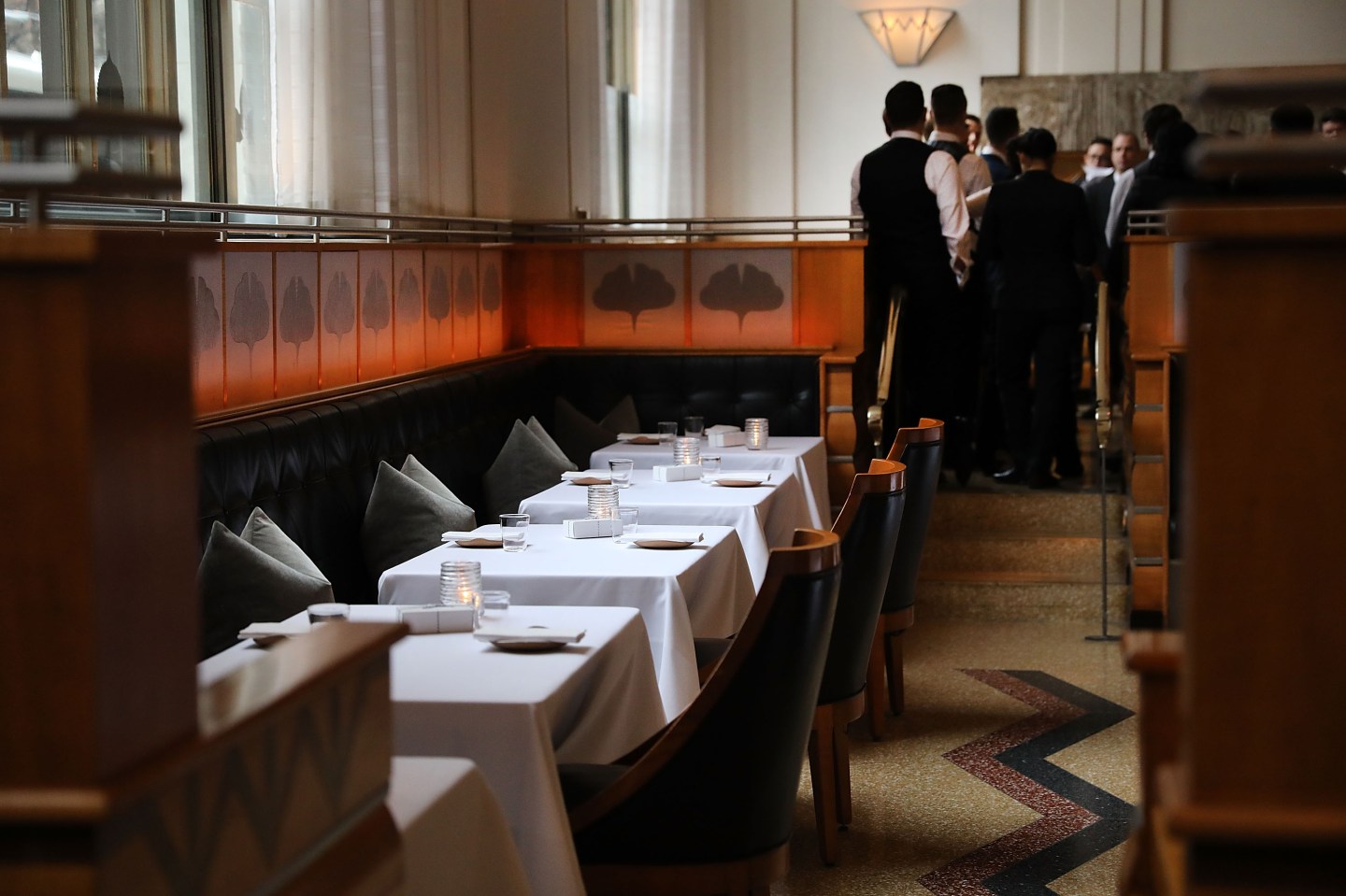 The main dining room is set for dinner at Eleven Madison Park at 11 Madison Avenue in the Flatiron District on April 6, 2017 in New York City.
Spencer Platt/Getty Images

Monday was Michelin day for New York. The eminent restaurant guide handed out a pair of new two-star awards—including one to Blue Hill at Stone Barns, chef Dan Barber’s restaurant north of the city. Those long-awaited stars for Barber—one of America’s most prominent chefs—were supposed to be the Really Big Deal this year.

In truth, the more useful Michelin results had already been out for a while. Earlier this month, the company unveiled its Bib Gourmands for the city, meant to represent “good value”—two courses and a glass of wine for around $40. (In New York, at least, this seems laughably low.) The Bibs, as they’re called, are usually described as “cheap eats” or with some other mildly demeaning euphemism. They can be a weather vane for actual stars, typically released a week later; those who’ve vanished from the Bibs might have risen to star status or vice versa. Often, Bibs are portrayed as consolation prizes, for restaurants whose aesthetics fall outside the narrow band that Michelin defines as worthy.

In fact, the Bibs are the farthest thing from that. They are, arguably, the only part of the Michelin system still worth paying attention to. Certainly, they’re the only part that in any way addresses how and where most of us actually eat today. Stars may get the attention, but they’re a benchmark whose time has passed.

Chef Junghyun Park of Atoboy and the Michelin-starred Atomix hosts a master class in Korean cuisine at the Institute of Culinary Education in 2017.
Monica Schipper—Getty Images for NYCWFF

To understand why, consider the other new two-star winner in New York: Atomix, the modern Korean restaurant from Junghyun and Ellia Park. The Parks have redefined modern Korean cooking—both with Atomix and its serene $205 tasting menu, but also with its more casual sibling restaurant, Atoboy, where the menu is $46. Same chef, same talent, same groundbreaking cooking. To shrug off the latter as a “value” is to undermine the extraordinary work that goes into a great restaurant at any level. It’s the sort of ugly stratification that has been diminishing over the past decade. So why does Michelin seem so intent on keeping it alive?

That question is doubly puzzling because there’s clearly a lot of work going into choosing the Bibs. In New York, Michelin inspectors felt it was important to highlight Momofuku Ssam Bar and Prune as well as ambitious arrivals like the wine bar Ruffian; or Haenyeo, one of the best-received restaurants of the year, where Jenny Kwak, who pioneered modern Korean cooking in the city, is doing her best work yet. Elsewhere in the country, the Bibs include Delfina in San Francisco, The Red Hen in Washington, D.C., and so on. (Michelin also has a third, even more puzzling, category: “Plates,” a Double A to the Bibs’ Triple A.)

In other words, Michelin spends lots of time and money compiling a list of some of the most compelling cooking in America—and around the world—and then pushes it off to second-class status. In doing so, Michelin has underscored its own irrelevance.

How so? Because even in 2019, its three-star restaurants—and many two-stars—can’t break out of a very narrow vision of dining: excruciatingly fancy, very expensive, and almost inevitably French-inspired. In Manhattan, that includes places like Eleven Madison Park, Le Bernardin, and Per Se, the last of which was demoted in recent years by nearly every critic but Michelin. Dining at Eleven Madison Park may be the sort of experience that’s “worth a special journey,” to use Michelin’s words—although these days that journey is more likely to be by private jet. But it’s not a journey many New Yorkers feel the need to make across town. Such restaurants reside in a different universe from how most of us eat.

It’s no different in Paris. A visit to a three-star Michelin darling there like Yannick Alléno’s restaurant at Pavillon Ledoyen is to step back into a France that barely exists anymore. (The last time I visited, the kitchen was very proud of having started some fermentation jars, like those crazy kids in Copenhagen.)

This complaint about Michelin is hardly new. For at least two decades, the guides have been facing a headwind. The most common complaint involves Michelin’s deep and inflexible bias toward formality and Frenchness—that even in, say, Shanghai, the sole three-star is run by a French chef. But more broadly, it’s that the guides keep talking about wanting to keep up with the times, and then seem to step farther away from them.

That Michelin isn’t fixing a flawed system shouldn’t at all detract from the enormous accomplishment of the chefs who earn those stars. They work extraordinarily hard and deserve the praise. But they also know what’s expected of them: to indulge Michelin’s obsession with formality, one that reeks of the old brigade system for restaurants that Escoffier was perfecting around the time Michelin started its guides in 1900. That old French way wasn’t about celebrity; it was about escaping the indentured servitude of the old restaurant kitchens. So why should we celebrate that today? Why shouldn’t we be praising chefs and staffs who want to create restaurants that meet their definition of hospitality? (The Bibs do just that, of course.)

Perhaps the biggest reason we haven’t witnessed more change is that no one is more enamored of Michelin than Michelin itself. It has an enormous capacity for absorbing its own hype and basking in its own self-importance—as with its high two-star praise for Claude Bosi at Bibendum, a new London restaurant that not only inhabits the company’s old offices, but whose decor includes a stained-glass rendition of Bibendum, the familiar puffy mascot.

But a tipping point may have come when Michelin returned to the West Coast earlier this year to hand out California stars. Having decided to expand this year to include the entire Golden State—and having raised the possibility of finally giving Los Angeles its due (it made a brief, failed attempt at an L.A. guide in the late 2000s)—Michelin did nothing of the sort. California’s three-star establishments were the same roster of seven spots—notably Wine Country stalwarts like The French Laundry and The Restaurant at Meadowood. Tejal Rao, the New York Times’ critic for the state, clapped back a few months later, asserting that these selections were “technically flawless, incredibly expensive and, in the end, somewhat predictable.”

And it wasn’t just that Los Angeles—the second-largest city in America—somehow didn’t merit a single three-star. But its two-stars were largely in the same predictable categories as elsewhere: precision French-minded cooking (Providence) and high-end sushi (Sushi Ginza Onodera). The most inspired choice was Niki Nakayama’s n/naka, a model for today’s multicultural California cooking.

As for the Bibs, they encapsulated the lifeblood of L.A. dining—everything from La Cevicheria and Jitlada, two of Jonathan Gold’s legendary finds; to Guerrilla Tacos, which redefined the boundaries of that particular foodstuff; to David Chang’s Majordomo, Pizzeria Mozza, Sqirl, Langer’s, and so on. “The restaurants they highlight aren’t unknown secrets to food-loving Angelenos,” the Los Angeles Times replied diplomatically. “They’re the life force of our communities.” And because Los Angeles is so willfully diverse in its dining, that made it the perfect city to lay bare another troubling aspect of the Bibs: Michelin uses them as a resting place for nearly every cuisine not notably Western or Japanese. (It has long been fixated on Japanese cooking.)

The funny thing is, I think Michelin actually knows how deep a hole it’s in. Two years ago, the company acquired a 40% stake in the Le Fooding, a popular Paris-based restaurant review guide, which for nearly two decades has been France’s response to Michelin’s own conservatism. As Michelin ignored newly fashionable Parisian neighborhoods, Le Fooding became a reference for France as it actually eats today, especially the bistronomie movement that has redefined Parisian cooking.

This year, for instance, Le Fooding’s restaurant of the year, Le Rigmarole—run by two chefs who met while cooking at three-star Guy Savoy, in case Michelin needed some perverse sort of pedigree—didn’t even merit a mention in the France guide. And it was only last year that Iñaki Aizpitarte’s restaurant Chateaubriand, which opened in 2006 and proceeded through the entire arc of fame, finally was deemed worthy of one star.

So it’s clear Michelin doesn’t feel any need to hasten change—no matter how awkward its oversights, including the worrisome lack of diversity, the lack of women especially, among the top ranks of chefs.

The only alternative, then, is for chefs—and we media enablers—to stop playing along. What if we behaved like the Parisians and just paid attention to more relevant critics, while treating Michelin as the slightly worn and inappropriate country uncle it seems to want to be? The more we talk out loud about how the Michelin stars are a relic, while its consolation prizes are the real win, the more we can push those stars to start reflecting the values of the 21st century, rather than the 19th.