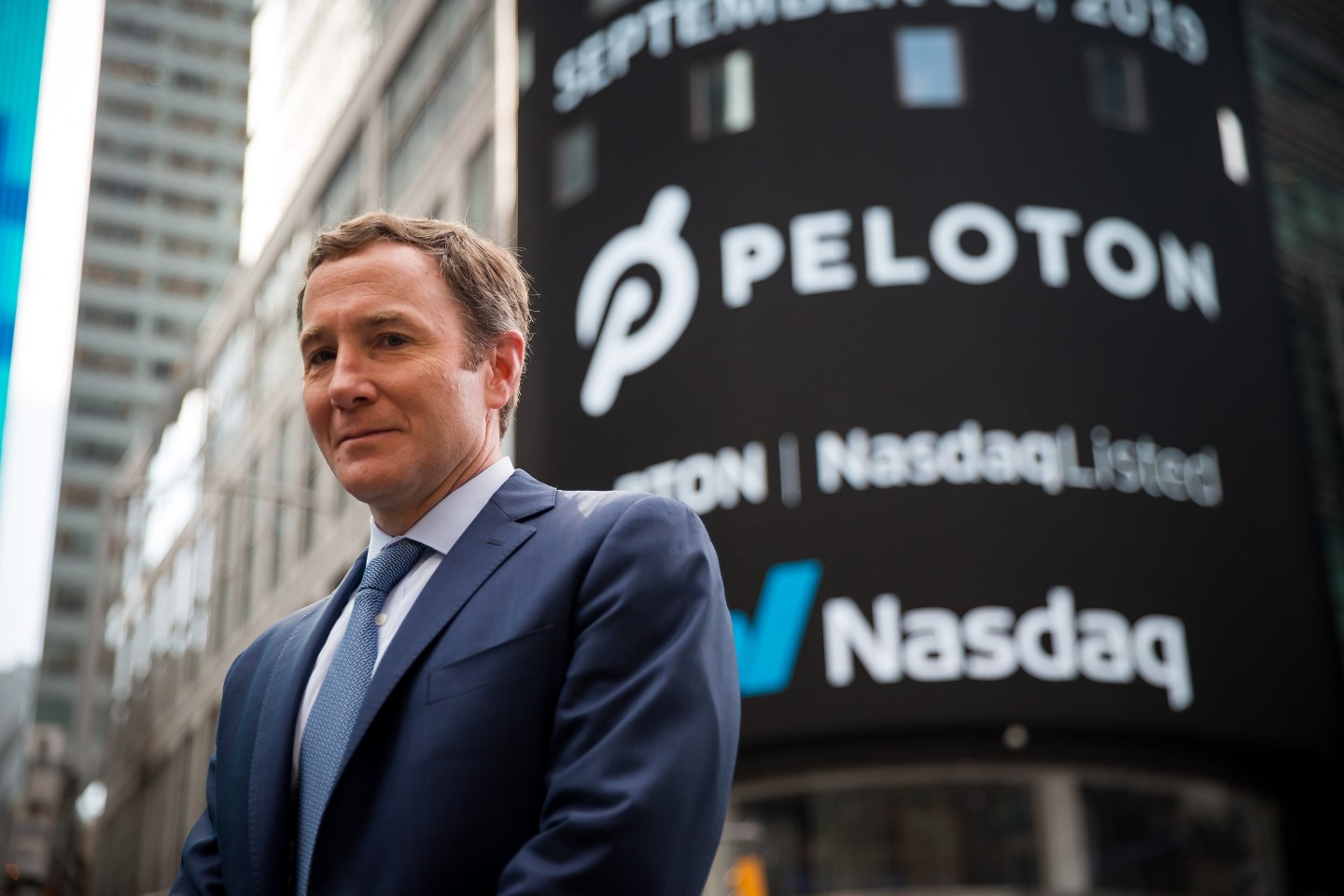 Peloton CEO Nasdaq John Foley, co-founder and chief executive officer of Peloton Interactive Inc., stands for a photograph during the company's initial public offering (IPO) in front of the Nasdaq MarketSite in New York, U.S., on Thursday, Sept. 26, 2019. Peloton fell as much as 9.5% Thursday after raising $1.16 billion in its U.S. initial public offering, becoming the latest unprofitable startup to fail win over investors in its trading debut. Michael Nagle/Bloomberg via Getty Images
Michael Nagle—Bloomberg via Getty Images

Peloton finally pedaled its way to an IPO on Thursday.

Peloton Interactive, the “Netflix library, but for fitness classes,” as the company’s co-founder and CEO John Foley has called it, is the latest in a long list of high-growth, high-cash burn companies to IPO this year.

But Peloton’s Foley says the company went public at the right time—despite tumult in the IPO landscape (think Uber and Lyft), not to mention the markets.

“I will say a lot of these young tech companies get criticized for staying in the private markets too long, and I feel like if we would have waited any longer we might have been painted with the same brush, so it felt like this was the right time,” Foley told Fortune.

The cult fitness-slash-bike-slash-tech-slash-media company (whew) began trading at $27 per share—but dropped over 14% from its initial price offering at $29 per share (which would earn them over an $8 billion valuation)—closing down over 11%.

The first-day-drop looks familiar, despite Foley’s aspirations of bucking the trend—Uber dropped over 7% on its first day and SmileDirectClub plunged some 28% during its debut.

In fact, while the fitness company has over 100% growth, their losses are also steadily stacking up each year. Last year, for example, Peloton lost $196 million on sales of $915 million during the 12 months ending June 30, and burned a net $245.7 million in fiscal 2019.

“I would say in general, investors have become a little less risk-tolerant in recent months,” says Nick Einhorn, vice president of research at Renaissance Capital, provider of institutional research and IPO ETFs. Renaissance Capital’s IPO ETF has underperformed since August, he notes. “Peloton is obviously unprofitable at the moment. I think there’s some questions about the long-term prospects, … the valuation is a little tricky on this—it’s sort of a product company but it’s sort of a subscription service.”

To be sure, one of the biggest problems for IPOs this year has been valuations, with companies like Uber and Lyft achieving high private valuations, but failing to charm public investors (both stocks are down over 20% since their debuts). But Foley maintains Peloton isn’t to be lumped in—”I think we priced right,” he said. “The markets are jittery for all kinds of macro and micro reasons, but we are happy.”

In fact, Foley said on CNBC’s Squawk Box Thursday that the company even “left something on the table in terms of pricing,” hoping for upward momentum.

But with Peloton’s stock already off a double-digit percent from its initial price, investors don’t seem as convinced.

“The challenge is that a negative first-day performance can spook a lot of investors and can kind of drive the stock lower,” Einhorn tells Fortune. “We saw that a bit with SmileDirect. I think that’s definitely a danger in the near term.”

Foley notes the company is chasing what seemingly every other big cash-burning IPO wants—what he calls “category-agnostic” investors searching for growth.

“They want high growth and in our case hyper growth, so we plan to delight investors that see that our decision to prioritize growth over profitability is a good one,” Foley tells Fortune. And, seemingly a tale as old as time, Peloton is doing just that: prioritizing spending with no pressure to become profitable right away.

“For the short term, we’re going to prioritize growth over profitability because we’re in investment mode and we’re investing in all kinds of things,” Foley tells Fortune. The CEO estimates the company is on track to become profitable in the 2023 fiscal year.

But even at an over 100% growth rate, Peloton has notable headwinds. With hardware equipment (the majority of their revenues) going for a pretty penny and the threat of a coming recession wiping out prospective customers’ discretionary spending (not to mention a $300 million lawsuit by music publishers), Peloton’s balance sheet may be getting a workout.

Whether or not Peloton peels away from the crop of 2019 IPOs remains to be seen. But either way, Foley doesn’t seem to be breaking a sweat just yet.