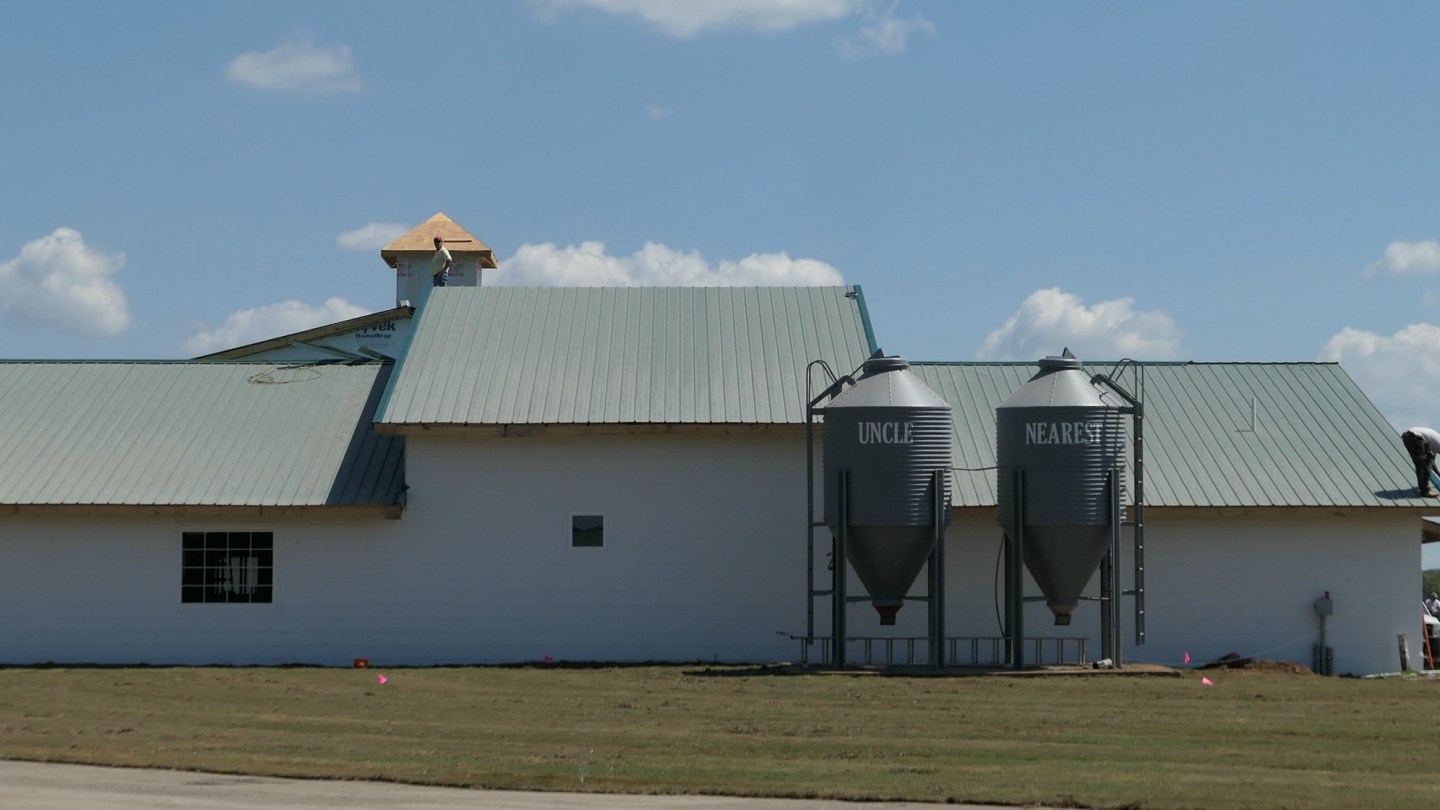 The Uncle Nearest Distillery honors a former slave who is thought to be the founder of Tennessee whiskey.
Emily Price

Just 48 hours before a few thousand people were expected to arrive at Tennessee’s historic Sand Creek Farms, home of the new Nearest Green distillery, to celebrate its opening, workers had to remove the roof from one of its buildings.

“Sitting here working and looking out the window it’s just truck and truck after truck,” says Fawn Weaver, cofounder of the distillery, from a house at the front of the property. Everywhere you look, there is a worker building a wall, laying sod, or putting the finishing touches on a bar.

Constructing the space on the historic walking-horse farm has meant a lot of construction but also a lot of demolition. “This is not an exaggeration: I have spent $100,000 in the last two months just dumping stuff,” Weaver says.

The roof incident was a last-minute change required by a building inspector—a frustrating one—but one Weaver took in stride. In addition to being the owner of the distillery, her first foray into the spirits business, she is also in the middle of another first: her first time as foreman of a construction site—and it’s a massive one.

The distillery is being built on the 270-acre farm not only to house the whiskey brand but also to honor the legacy of Nathan “Nearest” Green, the first African-American master distiller on record in the U.S. Green is thought to be the man responsible for helping perfect the process used to make Tennessee-style whiskey, a process he shared with Jack Daniel, for whom he distilled. And yet it is Daniel who is often credited with being the original maker.

Once completed, the space will have a visitors center where people can learn more about Green; a 20,000-barrel rickhouse; a 600-seat arena; and a bar where visitors can enjoy whiskey cocktails as the sun sets. And staying true to its walking-horse farm roots, the distillery grounds will house championship horses.

The story of the Nearest Green distillery begins, in part, in June 2016 in Singapore, where Weaver happened to be traveling when she read a New York Times article titled “Jack Daniel’s Embraces a Hidden Ingredient: Help From a Slave.” Weaver says she was immediately fascinated by the story but also a bit troubled by it. “The story didn’t have any proof,” Weaver says. “That’s a problem.”

The article focused on Nearest Green, a slave who taught Jack Daniel how to make whiskey. The article’s source, however, was a family member who—by his own account—only knew he was somehow related to Green because his mother told him so.

“When I read it, I thought it was fascinating. But I’m looking at it, and it’s essentially folklore,” Weaver recalls. After finding only regurgitations of the Times story online, Weaver, still in Singapore, ordered a book about Jack Daniel, Jack Daniel’s Legacy, noted in a new, exceptionally sparse Wikipedia page on Green. After returning to her home in Los Angeles and reading the book, she instantly wanted to learn more. Weaver says she felt as if the story was calling to her, so she decided to plan a trip to Tennessee.

That trip eventually led Weaver to connect with some of Green’s descendants and enabled her to put together some of the pieces of Green’s story.

“It was not uncommon for us to hear the story,” says Victoria Eady-Butler, one of those descendants with whom Weaver spoke. “My grandmother’s house was the meeting place in Lynchburg [Tenn.] for numerous people, and we would sit on the front porch in the evenings, and she’d always share the story about her grandfather being the one that taught Jack how to make whiskey.”

Eady-Butler is now working with Weaver at the distillery as its director of administration.

“I think a lot of what is happening is divine,” Eady-Butler says. “I truly believe that God chose Fawn Weaver to be the spokesperson and the driving force behind everything that’s taking place now. It has been a long time coming, and I never thought this would happen.”

Fawn Weaver gathers with the descendants of Nathan “Nearest” Green at the distillery’s opening.
Marc Pagani

Through conversations with residents and visits to the Lynchburg archives, Weaver has been able to gather a good bit of background on Green. When the question came up of what would be the best way to honor him, his name on a bottle made the most sense.

The Nearest Green Distillery will have a bar, a massive rickhouse, and its own theater.
Emily Price

The distillery represents the next step. The most important aspect of the space, however, is that Nearest Green himself finally has a home. “If you’re going to build somebody’s legacy, there’s got to be a permanent place. It can’t just be on the bottle,” says Weaver. The Uncle Nearest distillery officially opened its doors earlier this month, three years after Weaver read that article. And this is only the beginning.

“I’m going to make sure this legacy is cemented while I’m still here. That means every day I’m working around the clock, because I don’t know if I’ll still be here tomorrow. I sure hope so. I hope I’ll be here the next 50 years, but it’s not a guarantee,” Weaver says. “I believe I was chosen to cement this legacy, and I’m going to give it every frickin’ thing I’ve got.”

—Red blends are more popular than ever in the U.S.
—What exactly is a super-premium spirit anyway?
—Your next Spotify playlist might be curated with wine pairings in mind
—Some of California’s most famous wines came from a science experiment
—How the $3.6 billion cognac industry is trying to outrun climate changeFollow Fortune on Flipboard to stay up-to-date on the latest news and analysis.