How the ‘Battle at Big Rock’ Short Film Sets Up a Smarter, Scarier ‘Jurassic World 3’ 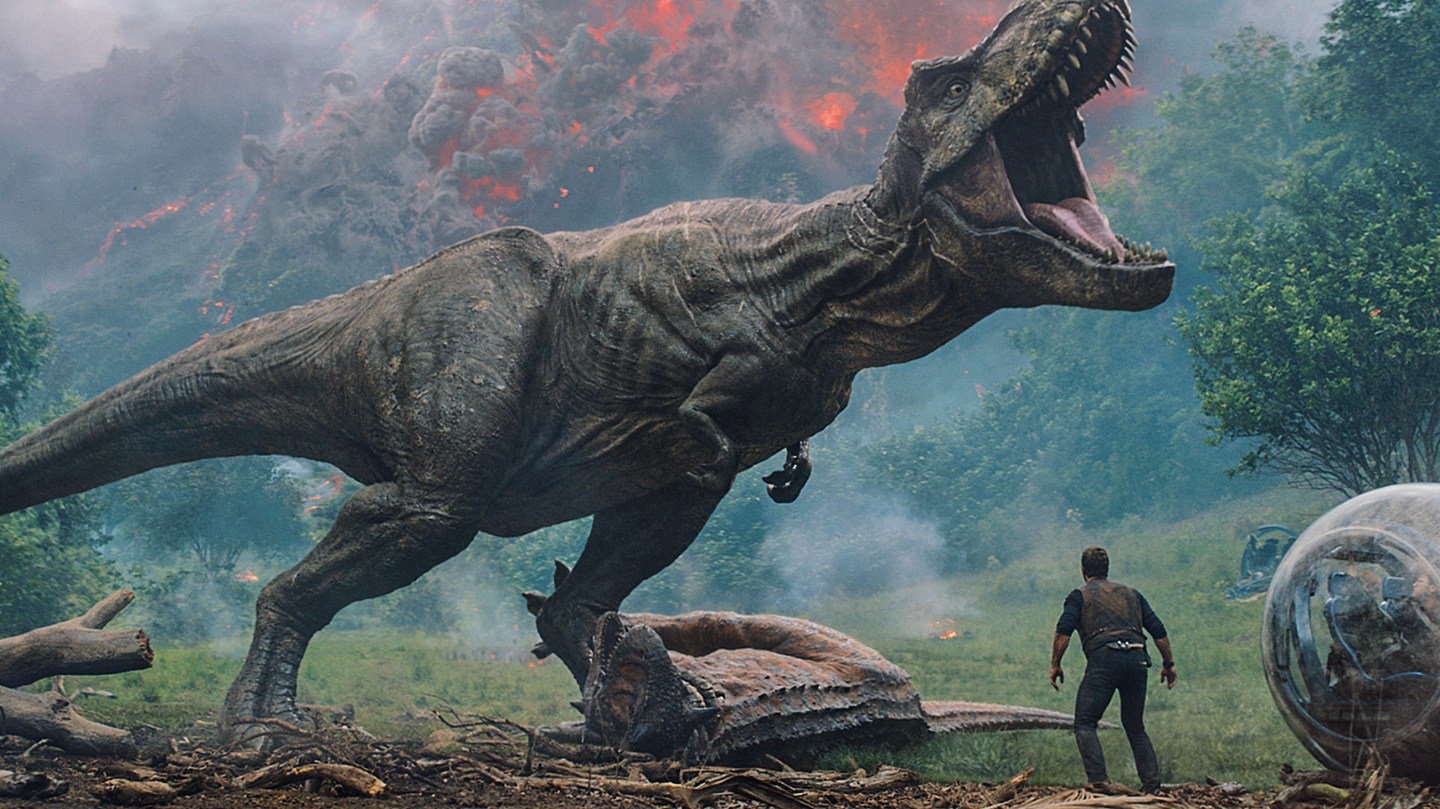 The third Jurassic World, currently untitled, isn’t due until the summer of 2021, but director Colin Trevorrow is already teasing the darker, more dangerous tone his threequel will take with short film Battle at Big Rock.

The secret project, unleashed on FX last night before dropping online, spends eight-and-a-half minutes in Trevorrow’s vision of a dino-filled North America—and it’s most compelling in its depiction of what perils would lie in store for puny humans suddenly forced to share the world with the ancient, genetically restored fossils.

In the short, a family’s camping trip devolves into a desperate, tooth-and-scale battle for survival when a female Nasutoceratops and her baby wander toward the campfire. Quickly, the peaceful herbivores attract a bigger threat: a hungry Allosaurus, which eventually gives up on the dinosaurs once it zeroes in on the family’s wailing infant.

André Holland (Hulu’s Castle Rock), Natalie Martinez (Netflix’s The I-Land), newcomer Melody Hurd, and Pierson Salvador (AMC’s NOS4A2) star as the imperiled family. Trevorrow directed from a script he co-wrote with Jurassic World 3 scribe Emily Carmichael, suggesting that the grittier, darker tone of this short will set the tone for the franchise’s next installment.

‘Big Rock’ Picks Up A Year After ‘Fallen Kingdom’

Last summer, Jurassic World: Fallen Kingdom threw open the gates at spooky, nefarious Lockwood Manor and sent dinosaurs racing through them out into the world, all the better to evade black-market auctioneers who’d sought to sell them to the highest bidder.

That end-twist came after a scarier, more insular entry for the franchise (notably directed by The Orphanage filmmaker J.A. Bayona as opposed to Trevorrow) that had already seen Isla Nublar melt down during a volcanic eruption. And though the film’s story did matter in some senses—there were pint-sized human clones, and U.S. Senate hearings attended by one Ian Malcolm (Jeff Goldblum)—Fallen Kingdom really came down to two shots.

In the first, a lone Brachiosaurus, left behind on Isla Nublar mid-eruption, slowly succumbs to volcanic fumes as its would-be rescuers watch on from a departing ship. And in the second, dinosaurs freed from captivity begin to feel out life in the wild: a mosasaur lurks beneath waves and the surfers riding them, a fearsome T. rex trades roars with zoo lion, and a velociraptor looks curiously toward a suburban neighborhood.

Both scenes are carried into Battle at Big Rock, which essentially subs in dinosaurs for more typical camping nightmares like rampaging bears or hungry coyotes. Minus the presence of the Mesozoic-era reptiles themselves, the short unfolds more or less along logical lines. The Allosaurus isn’t evil, just hungry, and the family unwittingly in its path simply picked the wrong campsite. As they defend themselves with fire extinguishers, metal bars, and a neighbor’s crossbow, the family signals a reality Jurassic World will be grappling with in its next installment: survival looks a little different when your species is no longer at the top of the food chain.

The short’s credits are interpersed with footage of the dinosaurs impacting life across the country, from ruining weddings to causing nasty-looking car accidents. But the most telling may be a shot at least initially familiar to anyone who’s seen a nature documentary: an oceanic predator leaps from the water, holding a meal in its mouth—only to find itself in the jaws of some water-dwelling dinosaur rising from the depths.

‘Big Rock’ and Its Link to the Larger Jurassic Franchise

Steven Spielberg’s original Jurassic Park and its sequel played with a sense of childlike wonder in their exploration of dinosaurs recreated from prehistoric DNA. John Williams’ swelling scorework, Spielberg’s trademark sense of hope and amazement, lifelike animatronics, the film’s strong identification with a child’s point of view—all of it combined to make Jurassic Park a movie in awe of its dinosaurs as much as it was terrified by them.

Five films into the franchise (with the sixth incoming), Universal has worked to preserve that sense of wonder, even as Trevorrow’s first time at bat moved viewers into a world wherein dinosaurs had been commercialized and normalized to a near-garish degree. Bayona’s sequel to Jurassic World called back to Spielberg’s first film by moving the action indoors, to a mansion replete with darkened hallways that doubled (unfortunately) as prime hunting grounds for run-amok dinos. In smaller quarters, one’s options for escape are correspondingly limited, often making for more effective scares.

If Battle at Big Rock is any indication, Jurassic World 3 could try to make the franchise smaller even as its story expands, focusing on the kinds of chaotic, man-versus-wild incidents that would naturally unfold with dinos out in the world. Trevorrow, speaking with Jurassic Outpost, has teased as much previously.

“I just have no idea what would motivate dinosaurs to terrorize a city,” he said. “They can’t organize. Right now we’ve got lethal predators in wild areas surrounding cities all over the world. They don’t go pack hunting for humans in urban areas. The world I get excited about is the one where it’s possible that a dinosaur might run out in front of your car on a foggy backroad, or invade your campground looking for food. A world where dinosaur interaction is unlikely but possible—the same way we watch out for bears or sharks. We hunt animals, we traffic them, we herd them, we breed them, we invade their territory and pay the price, but we don’t go to war with them. If that was the case, we’d have lost that war a long time ago.”

—Some of this fall’s most buzzed about TV shows will feature familiar faces
—Here’s when your favorite TV shows return this fall
—Music supervisors for Better Call Saul, Russian Doll, and Fosse/Verdon talk about their craft
—From GLOW to Stranger Things, behind the ’80s TV comeback
—Inside Succession with executive producer Adam McKay and actor Kieran Culkin
Follow Fortune on Flipboard to stay up-to-date on the latest news and analysis.