There’s a Cowhide Glut, As Americans Devour Beef and Leather Falls Out of Fashion 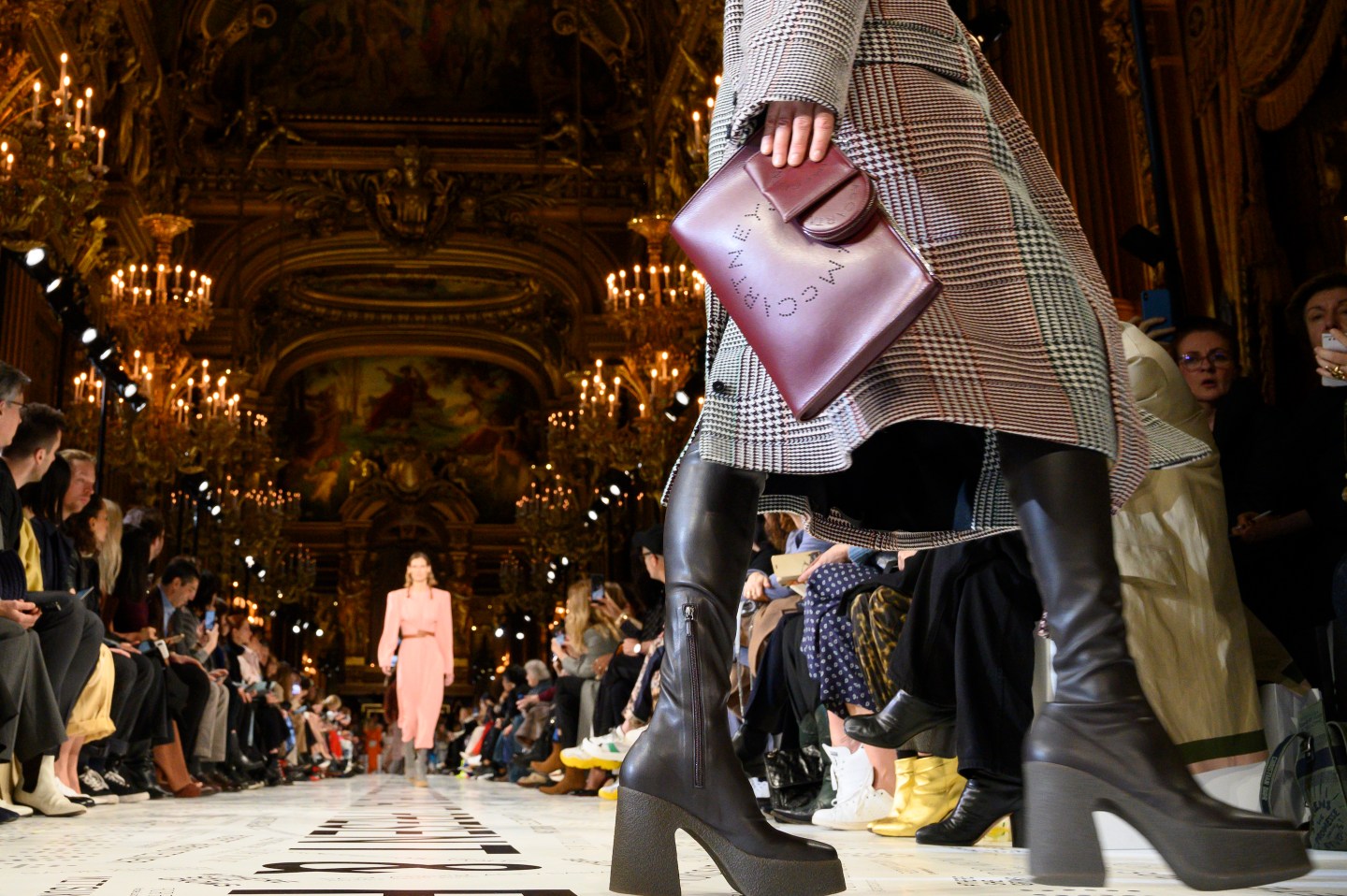 U.S. consumers are eating more beef, more than they have in a decade. But a byproduct of this carnivorous hankering is piling up, unloved and unwanted. Shoppers who once coveted leather jackets and shoes are instead scooping up cheaper, synthetic alternatives, reflecting a growing ambivalence toward this former staple of American closets.

The glut of cowhides has caused prices to plummet, rendering many worthless. And just as the American love for meat has caught on around the globe, so too has the abandonment of leather, from clothing to car seats. Hides are even starting to go to landfills while the smaller leather processors are going out of business.

Just five years ago, prices soared after a drought shrank the U.S. herd to a six-decade low. Leather outpriced itself, forcing shoe and clothing designers to cut the material from their products. Combine that with the rise of athleisure, the growing popularity of vegan clothing, and industry focus on creating more sustainable fashions, and one can see why demand hasn’t come back.

Cattle hides, an obligatory byproduct of beef and dairy consumption, will be around as long as Americans like cheeseburgers, steaks, and ice cream. And while cattle ranchers and dairy producers have been under pressure from declining milk demand and dairy alternatives, the rise of substitutes, including plant-based burgers, has yet to dent America’s taste for the real thing.

With piles of 100-pound cowhides accumulating all over the country, unused and unsold, leather makers are warning of a looming commercial disaster. Hides have often accounted for 50% of the value of the animal’s byproducts, and byproducts can be 10% of a steer’s value or more. Hides from cows, which are lower quality than those of steers, have fallen to only about 5% of the value of all byproducts—worth less than tongues and cheek meat. It’s not even 1% of the value of a live cow.

“There are hides with no value,” said Joe Brannan, manager of export sales at Twin City Hide, a processor based in South St. Paul, Minnesota. “We’re throwing a natural product in the garbage.”

There’s still plenty of demand for high-quality leather—the type used in pricey handbags or high-end sofas—but that’s just one part of the industry. Most animals don’t have perfect hides, and many are branded. Older animals that have weathered the elements on pastures for years have skin marred by imperfections.

Twin City Hide has had to stop taking lower-quality hides from smaller beef companies, since the cost of processing them is more than it can recoup. In the first five months of this year, the company saw a 27% drop in production, with 20% of its current inventory sitting in warehouses—worthless.

“There’s no one bidding, no one trying to buy them,” said Brannan, who has worked in the hide business since 1976.

According to Hidenet, a leather markets research firm, a hide from a branded cow went for as little as $4 the week of July 15, down from as much as $81 just five years ago. Vera Dordick, chief executive officer and publisher of Hidenet, added that it’s not just the U.S. industry that’s suffering.

“It’s a worldwide crisis,” Dordick said. “Some people used to say, ‘We haven’t buried any hides yet.’ Now they can’t say that.”

Before the bottom fell out, imperfect hides could be turned into small leather goods, such as cheap handbags. A finishing treatment, like a print, a coat of polyurethane, or buffing the hide into suede, could smooth over rough spots, said Stephen Sothmann, president of the Washington-based U.S. Hide, Skin and Leather Association, an industry lobbying group.

But thanks in part to synthetic fabrics, that’s no longer the case. So-called fast-fashion and athleisure—clothing which contains no leather at all—now dominate American retail. And for those who still favor the look of leather, imitations have gotten more sophisticated and can breathe like the real thing, said John Hochstein, vice president of hide and leather sales for National Beef Packing Co., one of the four major U.S. meatpackers.

Many synthetic leathers are made of petrochemicals, which raises an environmental dilemma for some consumers. So now, shoppers are flocking to eco-friendly faux-leathers made from fruit peels and recycled fabrics.

As long as it doesn’t contain leather or other animal products, it can be described as vegan. Such clothing, accessories, and footwear saw a 54% increase at U.S. retail stores in the first half of 2019, according to Helen Palmer, director of materials at trend forecaster WGSN. Shoes saw the biggest gains, while the decline of leather footwear—which traditionally used about half of the world’s cattle hides—has been especially pronounced.

“Clothing brands are trying to get in line with a more ecologically conscious, younger buyer,” Palmer said. And there’s some star power behind this latest trend: Meghan Markle has been spotted wearing Veja sneakers, which are made from recycled plastic and corn.

Vegan clothing aside, the choice between buying fossil fuel-based yoga pants or the skin of mammals raises another question: Which is worse for the environment?

Huantian Cao, a professor of fashion and apparel studies at the University of Delaware, said both have drawbacks. Petrochemical-based synthetics have the same sustainability problems as plastic, and they may even be worse. Every time you wash those stretchy pants, plastic microbeads and microfibers flow down the drain, into rivers and oceans.

While leather is a natural material, it’s derived from cattle farming. That industry generates methane emissions from cows and waste-filled runoff. Most U.S. hides, meanwhile, are exported to countries with less strict environmental regulations, where they’re tanned with harsh chemicals including chromium sulphate.

Even worse, this process uses a lot of water, said Cao, who also runs a sustainable apparel initiative. There’s ongoing research to try to find more environmentally friendly tanning methods, like using plant extracts and enzymes. But currently, he said, the chemical creates a better product.

Humans have been tanning hides to make leather since prehistoric times, using them for clothing and shelter. Byproducts of the cattle carcass such as bones, blood, and fat end up in soap, fertilizer, gelatin, medicines, and other products. But leather has always been the most prized byproduct.

National Beef’s Hochstein called environmental concerns about leather production “a ridiculous mindset.” The idea that turning hides into leather is bad for the environment “is so far from the truth, you have to laugh at it—but then you have to cry,” he said. “It shows how far people are removed from the food supply chain, that they don’t understand the value of raw materials.”

“A leather shoe isn’t going to end up in a million microbits in the ocean killing fish,” said Sothmann, the industry lobbyist. “It’s a natural material, and because we are dairy and meat consumers, we have an ethical need to produce these products as well.”

The industry is going to have to promote itself if it wants demand to come back, he said. While most processors ship their hides overseas, the trade war started by U.S. President Donald Trump has hurt that export market as well. U.S. leather makers recently received money from the administration to help offset the negative effect of tariffs.

Buffeted by this maelstrom of changing tastes and environmental awareness, an industry older than the nation is increasingly at risk.

Lowell Carson, owner of the Double L Ranch in Altamont, N.Y., who’s been working in the meatpacking industry for more than 30 years, said the leather business is in the worst shape he’s ever seen. He used to get $70 for his hides, he said. Now he’s giving some away for free and soon may have to send them to landfills, where he already ships his lambskins.

On the other side of the country, in Boise, Idaho, Southwest Hide Co. said it hasn’t made a profit in two years. As a result, the leather processor has been forced to cut production and hide purchases. The company handles millions of hides a year, sourced from small to medium-size beef processors. Margins were a few dollars apiece, so with the cutbacks, tens of millions of dollars are being lost.

“We have to tell our suppliers, ‘Listen, we can’t take this anymore,’ ” said Jay Jensen, the company’s director of international sales. “That leaves them in a situation where they have to figure out what to do with them.”