Has Mezcal Become Too Big for Its Own Good? 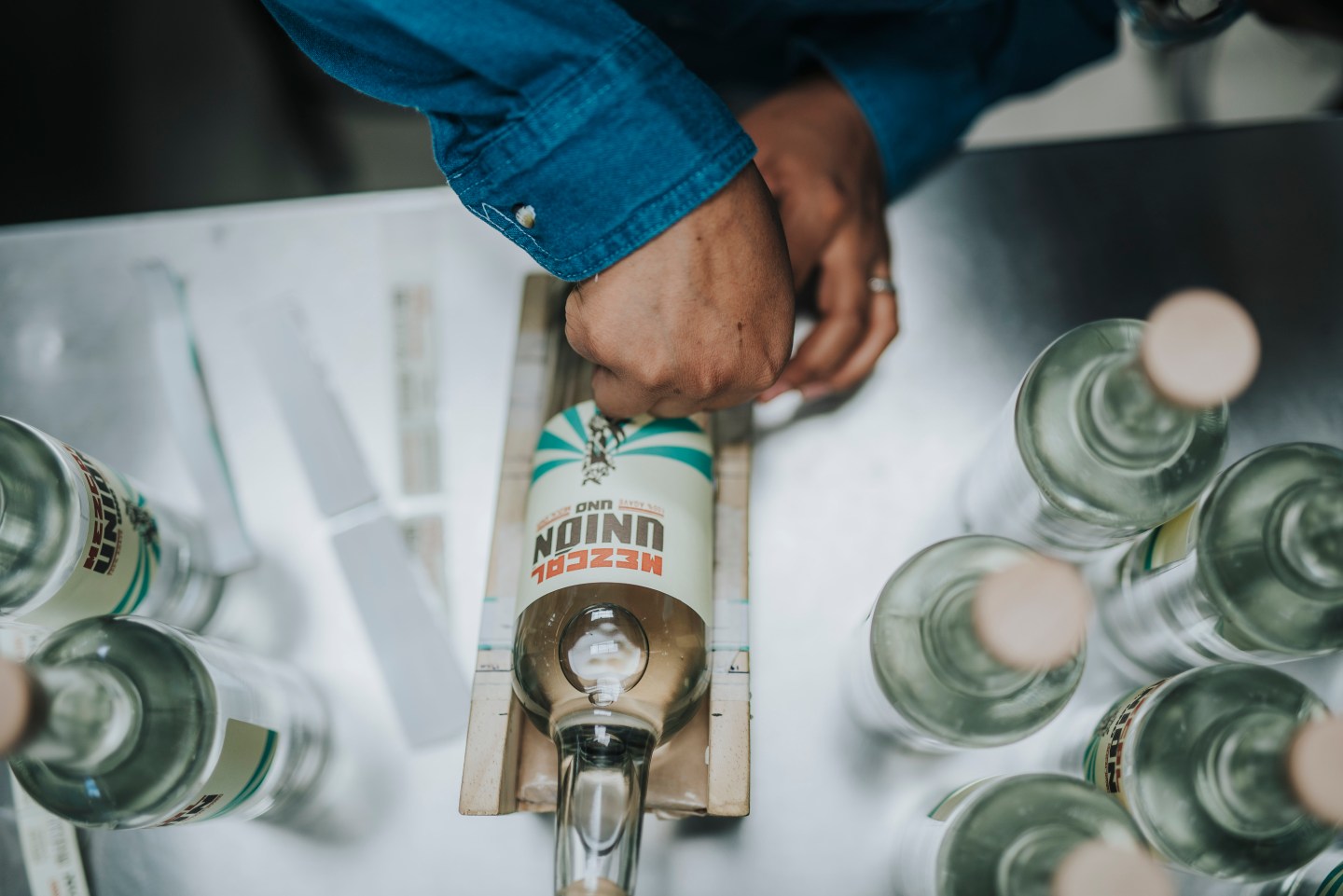 You don’t find mezcal—mezcal finds you.

It may just be a popular expression in the liquor world, but it rings true as Americans are increasingly discovering the agave-based, Mexican-made smoky cousin of tequila.

Beloved by bartenders, mezcal is enjoying a prime spot on trendy cocktail-bar menus, featured as an easy swap in popular drinks like the margarita, the negroni, or the old-fashioned. Insiders, however, say you should drink mezcal neat—meaning without any ice or mixers—to truly appreciate its complexity.

No matter how you enjoy it, sales are booming. Mezcal’s compound average growth rate over the past five years soared 25%, versus 6.3% for tequila, according to data from global alcohol-industry tracker IWSR. There’s also a long runway for growth, because only 244,000 cases of mezcal were sold in the U.S. last year, minuscule when compared with tequila’s 18 million cases, IWSR data shows.

“It is sort of the darling of the craft spirits space,” says Michael Gardner, global business leader of mezcal brand Del Maguey. “While mezcal is still only 2% of tequila’s size, it is growing in the double digits in the near term and beyond.”

Pernod Ricard acquired a majority stake in Del Maguey for an undisclosed amount in 2017.
Del Maguey

This pace of growth has caught the attention of the world’s largest liquor companies. Diageo has a distribution agreement with Mezcal Unión and completely owns Pierde Almas, while Pernod Ricard acquired a majority stake in Del Maguey.

Del Maguey was the first mezcal brand to truly go global, well before Pernod Ricard’s investment, with a plan to highlight 18 variations in distinct emerald-green bottles. Running between $40 and $200 a bottle, Del Maguey’s line set a floor price far above what vodka, tequila, and many liquors command—establishing a new standard for the category.

After taking a stake in Del Maguey in 2017, Pernod Ricard has expanded the brand’s restaurant and cocktail-bar distribution to under-penetrated markets like Arizona and Florida and added Del Maguey to more liquor stores and other retail accounts so consumers can take a bottle home.

“We feel we have the market leader, and we believe that market leaders in emerging categories are set up to win,” says Jeff Agdern, senior vice president of new brand ventures at Pernod Ricard.

When asked why so many large liquor companies are investing in mezcal, especially considering the category’s small size, Agdern has a simple response: “The answer is growth. We are all looking for growth.”

When Christina Choi joined Diageo about six months ago, she would explain to friends her role overseeing the rum, tequila, and mezcal categories, and nine times out of 10, people would exclaim, “Oh, my God, I love mezcal!”

When asked, “Well, what’s your favorite brand?”—they couldn’t name one. “Therein lies the opportunity,” says Choi, a senior vice president at Diageo. Mezcal is a liquor with nascent brand awareness.

Choi explains there are two distinct consumer segments for mezcal. The first seeks a balance between mezcal’s famed smokiness and agave, and this crowd is typically focused on enjoying cocktails at the bar. The second represents a more discerning drinker who is willing to pay more and sip it neat, like a drinker of Scotch.

The lineup from Casamigos, a tequila company cofounded in 2013 by George Clooney, Rande Gerber, and Mike Meldman. Diageo bought the brand for $1 billion in 2017.
Casamigos

Diageo’s Mezcal Unión is for the former, while Pierde Almas is targeted to the latter. A new Casamigos Mezcal, launched in 2018, is balanced with a bit of smoke and is also meant for the cocktail crowd but priced above Mezcal Unión.

Terms for the investments in mezcal haven’t been disclosed, but it’s a safe bet to say that they are dwarfed by recent blockbuster deals for tequila. Bacardi paid $5.1 billion for Patrón, while Diageo acquired Casamigos, which at the time was solely a tequila brand, in a deal valued at up to $1 billion.

“The best way to drink it is the same way I drink our tequila—neat or on the rocks,” Gerber says.

Fausto Zapata, cofounder and CEO of Mezcal El Silencio, says that as the brand grew, it began to talk to private equity firms and other potential investors for capital. Initially apprehensive about working with a large publicly traded corporation, Zapata says the partnership has been perfect.

“We welcome their expertise,” Zapata says, adding that Constellation Brands has boosted the brand thanks to marketing and distribution support. “Having the big players come in has helped the category become more visible.”

Constellation Brands has made a slew of liquor, beer, and even cannabis investments in recent years as the company aims to become a bigger player focused on premium-priced brands. But it hasn’t always proved a smooth transition. Bruce Linton, co-CEO of Canadian cannabis company Canopy Growth, says he was fired after the company reported greater-than-expected losses. Constellation Brands had invested $4 billion in Canopy for a sizable stake.

Mezcal’s sharp growth has resulted in economic opportunities for underserved communities in Mexico, particularly among families that have made the handcrafted liquor for generations. But this wealth has led to some tension.

Last year, new regulations went into effect that aimed to recraft the rules and outline for how mezcal is made, dictate how agave should be used, and even group mezcal into three definitive categories. But the rules mostly reflect how mezcal is made in the Mexican state of Oaxaca, where as much as 90% of commercially available mezcal is produced. Other states make mezcal differently, and the rules don’t account for their practices.

Separately, the regulations allow only certain states to sell their agave spirit as mezcal. Other Mexican states want in so they too can export to the U.S. and Europe, but Oaxaca wants to deny their entry.

“All of this is happening because mezcal is so hot,” says Susan Coss, cofounder of a mezcal-focused blog called Mezcalistas. “There’s a perceived sense of how much money can be made.”

Bartenders see the tension, too. “It is possible to get big without getting bad,” says Ivy Mix, co-owner of pan-Latin cocktail bar Leyenda, in Brooklyn, N.Y. Mix says the industry can create economic opportunity and continue to make mezcal in a traditional fashion, while also boosting volume.

But, Mix warns, “we are in trouble if we get a Patrón in mezcal.” What she means is, there is no way mezcal brands can feasibly achieve that much volume without losing what makes mezcal so special—the cultural traditions employed by indigenous families who harvest the agave.

Zignum, backed by Bacardi, provokes ire among some mezcal insiders because it is an industrially produced mezcal. Bacardi also backed Ilegal Mezcal, which Mix says is still adhering to traditions while scaling up.

Bacardi declined to comment on its mezcal investments, citing its status as a private company.

Mezcal Unión’s founders say the company’s entire purpose is to work directly with indigenous communities to ensure the spirit is truly handcrafted. The brand provides resources for harvesting Mezcal Unión’s agave on land that would have otherwise been idle. The indigenous partners, in turn, own 25% to 50% of the Mezcal Unión harvest—but the mezcal brand says it assumes all the risk of the investment. Diageo has aided the company by boosting distribution, giving the Mezcal Unión founders more time to focus on working with local families and sharing the collaborative heritage story.

“Mezcal is the best way to share our culture,” says Mezcal Unión cofounder Antonio Vilches. “We weren’t sure how we could keep it handcrafted but always knew it was what we wanted to do.”