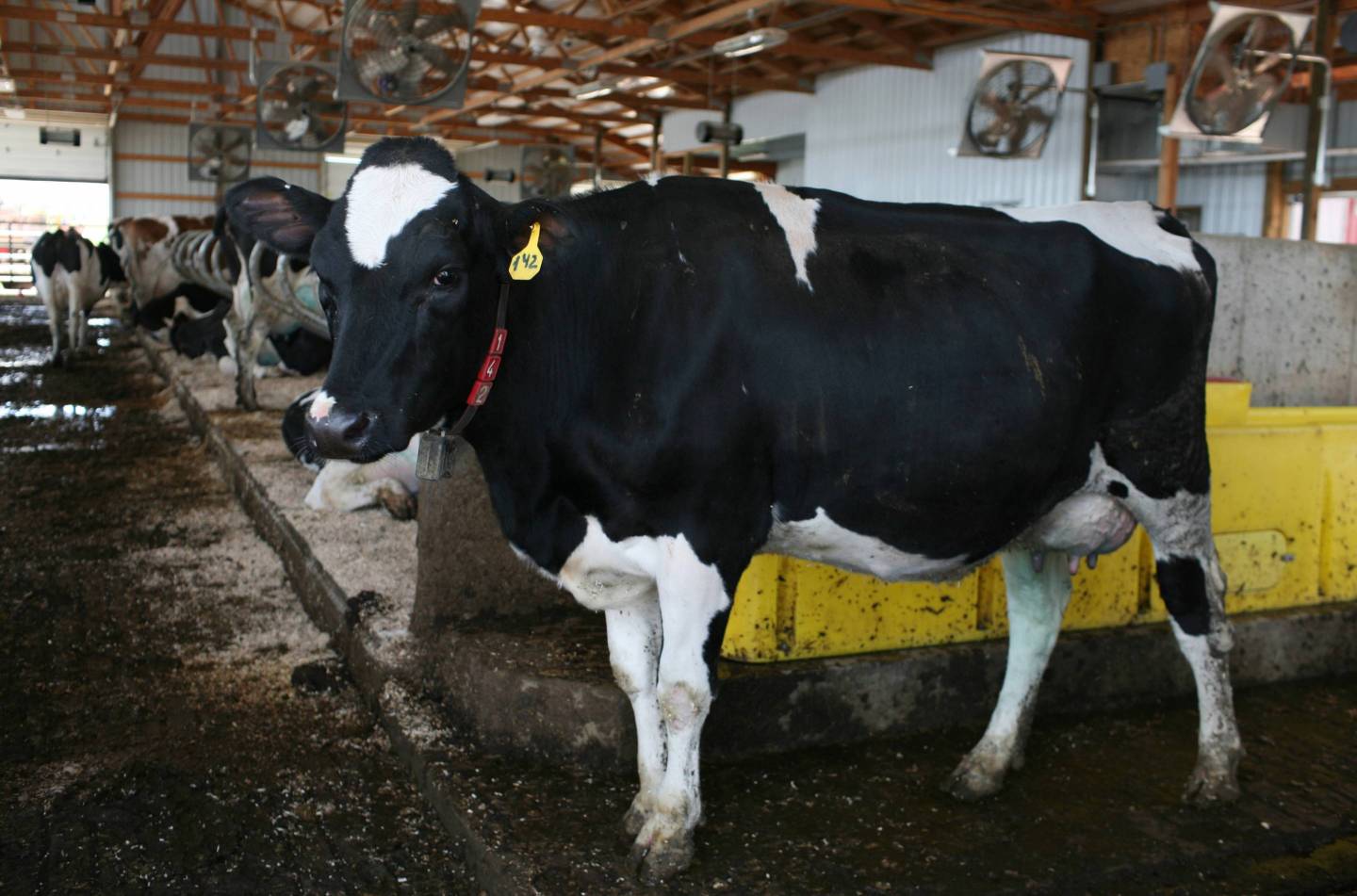 A cow at the June Dairy Breakfast in Marathon County, Wisconsin. The Scott Walker recall election in Wisconsin has deeply divided the state. Organized to end Governor Walker's term after 18 months for his efforts to end collective bargaining for state employees, the wealthy Republican suburbs of Milwaukee and the conservative farmers of Northern Wisconsin fought a political battle against the progressives of the state Capital, Madison, and the urban centers. (Photo by Andrew Lichtenstein/Corbis via Getty Images)
Andrew Lichtenstein—Corbis via Getty Images

Miyoko Schinner is a perfect illustration of the American dream. To the U.S. dairy industry, however, she is something altogether different.

A Japanese immigrant, Schinner started a small company that blossomed into a wildly successful vegan cheese maker, one with the potential to do for dairy alternatives what Beyond Meat is doing for beef substitutes. Her business, Miyoko’s Kitchen, began in 2014 as an e-commerce platform, trading on the popularity of her vegan cheese cookbook. After one weekend in which she received $50,000 worth of orders, Schinner knew her 40-pound batches wouldn’t be enough to satisfy demand.

So she figured out how to make 1,500 pounds an hour, raised $25 million and built a 30,000 square-foot facility in Petaluma, California. “It was very difficult to scale,” said Schinner, now 61. Making dairy alternatives out of ingredients like cashews and rice miso doesn’t always work as planned.

Drawing the line over butter

Until recently, the U.S. dairy industry had been relatively quiet about the proliferation of non-dairy products that use words like “milk” or “cheese.” But lately it’s been pushing back. Wisconsin, which calls itself America’s Dairyland, is one of the biggest dairy producers in the country. It’s also America’s biggest maker of actual butter.

So when it came to the kind of “butter” Schinner makes, Wisconsin and its powerful dairy lobby decided to draw the line.

Entrepreneurs such as Schinner have been riding a wave of popularity for plant-based products, especially dairy alternatives. Plant-based milk retail sales totaled $1.8 billion for the year ending May 25, a 6.5% increase, according to data from Nielsen. Cheese substitute sales totaled $117 million, showing 17.4% growth. Cashew butters were up to $12.6 million, representing an uptick of 4.9%.

Milk sales, meanwhile, have been suffering a multi-decade decline. In Wisconsin, the pain has been particularly acute. The state’s dairy farmers are exiting the industry at a rate of three a day as low milk prices persist and bankruptcies accumulate.

Adam Spierings is one of those former farmers. He asked 27 different banks to reconsolidate his debt, but none would consider it. He just took a job as a crop insurance adjuster while his wife teaches at a technical college. They recently sold their cows but are still trying to sell their other assets, including their farm and home in Weyauwega.

“It’s sad to think about what we had and what we were building and what we lost,” Spierings said. “But in the grand scheme, we’re not living in poverty like we were the last few years.”

Such dire circumstances have led some in the dairy industry, most notably lobbying groups like the National Milk Producers Federation, to campaign against alternative dairy products—specifically their use of dairy terms on labels. Changing consumer tastes are regularly cited as a chief cause of dairy’s slow demise, but vegan products using labels such as “milk”—or in this case, “butter”—are seen by the milk lobby as misleading consumers to unfairly steal market share.

In September, the U.S. Food and Drug Administration announced it was “considering approaches to modernize standards of identity” of dairy foods and would be collecting comment from the public. (A review of the those comments, commissioned by the Plant Based Foods Association, contends that 76% were fine with the status quo.)

Senators Tammy Baldwin of Wisconsin, a Democrat, and Jim Risch of Idaho, a Republican, are pushing the Dairy Pride Act, which would require the FDA to create a system of stricter nationwide enforcement for product labeling and the use of certain words. Under the proposal, labeling something “milk,” for example, must mean the product comes from a “hooved mammal.” A bipartisan House version has also been introduced by Representative Peter Welch, a Democrat from Vermont, and has 33 cosponsors.

States have been considering legislation of their own. The PBFA counts 10 that have tried or are trying to limit sales of dairy alternative products. Wisconsin, however, has tried taking a slightly different tack—at least when it comes to butter imitators. It ordered supermarkets to take any non-dairy product labeled “butter” off of its shelves.

For 75 years, until the 1960s, margarine was banned in Wisconsin. Serving margarine instead of butter to students, patients or inmates at state-run institutions is still prohibited, unless requested by a doctor. Irish brand Kerrygold—one of the most popular butter brands in the U.S.—was also pulled from shelves in recent years due to a state regulation that requires all butter sold in Wisconsin to have a federal or state grade mark, effectively shutting out foreign butters. Ornua, which owns Kerrygold, made a deal with the state in 2017 to submit to its grading.

On April 15, Wisconsin’s Department of Agriculture, Trade and Consumer Protection instructed retail food establishments to remove products that aren’t complying with the statutory definition for butter, which requires that it be made from milk or cream. “By definition, a ‘vegan’ product … cannot be legally labeled and sold as butter,” the state said. Products can be labeled as imitation butter, imitation margarine, or vegetable oil spread—but not the real thing, according to the memo.

The memo, which cited other non-dairy products, including one from Upfield brands, came in response to industry complaints about Miyoko’s Kitchen, according to copies of emails to state regulators.

Bob Bradley, a professor emeritus at the University of Wisconsin, Madison Department of Food Science and author of two books on the topic of butter, said in an interview that such products are mislabeled. “It is not butter,” he said flatly.

This is not the first time Miyoko’s butter has been challenged. Her company faced a proposed class action lawsuit last October in New York, but it was settled. Steve Ingham, director of Wisconsins agriculture’s consumer bureau, said June 12 the directive banning products such as Miyoko’s has since been suspended in favor of a public comment period.

“We make a significant proportion of the nation’s butter, and that’s a part of the dairy industry that has been doing well,” he said in an interview. “So we take it seriously, and when I get complaints about this—these imitation butter products—we do follow up.”

During the almost two months the removal order was in effect, Miyoko’s Kitchen said its products were pulled from at least one Whole Foods store in Madison and from the retail chain Skogen’s Festival Foods. Whole Foods declined to comment. While Festival Foods confirmed Schinner’s products had been removed from its stores, no other products were singled out, said Kayla Paul, quality assurance and regulatory affairs specialist for the chain.

A health inspector arrived at one of Skogen’s locations in mid-April, she explained. The auditor said the store couldn’t have Miyoko’s vegan butter on its shelves because of its use of the term “butter.”

“There was a lot of back and forth—‘Whose regulation is this?’” she said. “We thought, if it’s a Wisconsin regulation, why aren’t other stores doing it, too?”

Schinner said she offered the state a solution: Her company would have stores affix stickers that say “vegetable spread,” if the state would approve it. But the state agriculture officials didn’t respond for more than a month, her company said. Then, they approved the label on June 12.

Ingham, the Wisconsin official, said his agency isn’t planning to enforce labeling laws on other dairy products, such as fluid “milk,” but will follow the FDA’s lead.

“It’s always good to check on the legality of the label,” Ingham said, adding that Wisconsin produces more than a third of the nation’s butter. “It’s been an important product.”