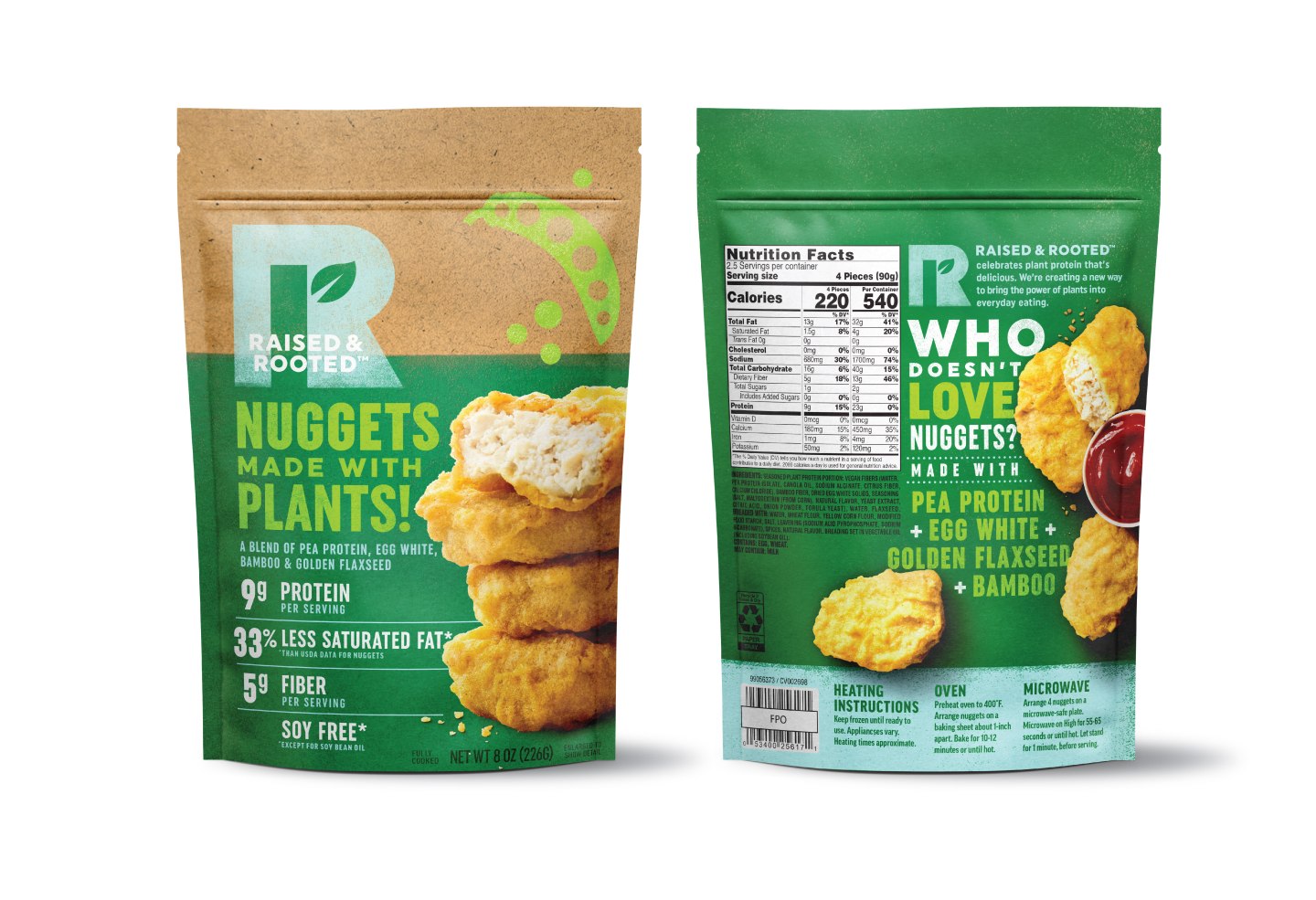 The fast-growing market for meat alternatives has a surprising new player: Tyson Foods.

Tyson, one of the world’s largest meat producers, will begin selling nuggets made from pea protein at grocery stores this summer. A blended burger made from beef and pea protein will follow this fall. Both will be sold under a new brand, Raised and Rooted, which will continue to develop plant-based and blended products for both groceries and restaurants.

Tyson is responding to a growing global trend toward plant-based eating, fueled by health and environmental concerns. U.S. sales of meat substitutes are expected to jump 78% to $2.5 billion between 2018 and 2023, according to Euromonitor. Global sales could reach $23 billion in that same timeframe.

Startups like Beyond Meat, which makes burgers and sausages from pea protein, and Impossible Foods, which has a soy-based formula, have also raised consumers’ interest with products that mimic meat so closely in taste and texture that they’re being sold at Burger King and Carl’s Jr.But the entry of Springdale, Arkansas-based Tyson could upend the alternative protein market because of its sheer size and distribution capacity. Tyson Foods reported $40 billion in sales in its 2018 fiscal year; Beyond Meat, which held its IPO last month, forecasts $210 million in sales this year. Tyson has 50 facilities just for processing chicken; Impossible Foods has one factory in Silicon Valley.

Tyson has been watching the alternative protein market for a while. Its investment arm, Tyson Ventures, acquired a 5% stake in Beyond Meat in 2016. It sold that stake before Beyond Meat’s IPO, but it continues to hold investments in other startups, including Memphis Meats and Future Meat Technologies — which grow meat from cells — and mushroom-based protein startup MycoTechnology.

“These things work together and help us have a broad view of what the world of food looks like,” said Justin Whitmore, who leads Tyson’s alternative protein business.

Whitmore said the company noticed a significant upswing in the number of consumers who eat meat but want alternative sources of protein. About a year ago, Tyson’s chefs and consumer specialists began developing its own alternative protein products. The nuggets it came up with look like fried chicken, but they’re made with pea protein, egg whites, flaxseed and bamboo fiber and other ingredients.

“It became apparent we had the capability not only to compete but to lead in this space,” Whitmore said.

Whitmore said Tyson will develop more Raised and Rooted products and also spread plant-based alternatives through its other brands. For example, Tyson’s existing Aidells brand is getting sausage and meatballs that contain 50-60% chicken and 40-50% plants like chickpeas, quinoa and lentils.

The products will be sold at grocery stores and restaurants, but Tyson isn’t yet saying which ones. One Tyson customer, McDonald’s, has yet to say whether it will add a plant-based burger to its U.S. menu. It sells one made by Nestle in Germany.

Nestle is among the companies that could challenge Tyson. Last week, the Swiss food giant said it plans to launch its Sweet Earth brand Awesome Burger in the U.S. this fall. And earlier this week, Maryland-based chicken company Perdue Farms said it will soon start selling nuggets, tenders and patties made from a blend of chicken and vegetables.

Maple Leaf Foods, a big Canadian meat company, also sells plant-based alternatives under its Lightlife brand, which it acquired in 2017.

But Whitmore didn’t express concern about competitors, saying Tyson’s speed, scale and distribution expertise — as well as its 84-year history — puts it ahead of companies who have been in the plant-based market for longer.

Whitmore said groceries will be able to decide where to put Tyson’s plant-based products. Beyond Meat has seen success partly because its burgers are sold in the meat aisle and not in the freezer section with traditional bean- or corn-based veggie patties.

Tyson is also being careful to describe its products as “alternative proteins” and not “meat,” a label used by some plant-based companies that has riled the meat industry. Some states, including Arkansas and Missouri, ban plant-based foods from being called “meat.”