J&J Called a ‘Kingpin’ in Opioid Case That Could Be a Test for 1,600 More Lawsuits 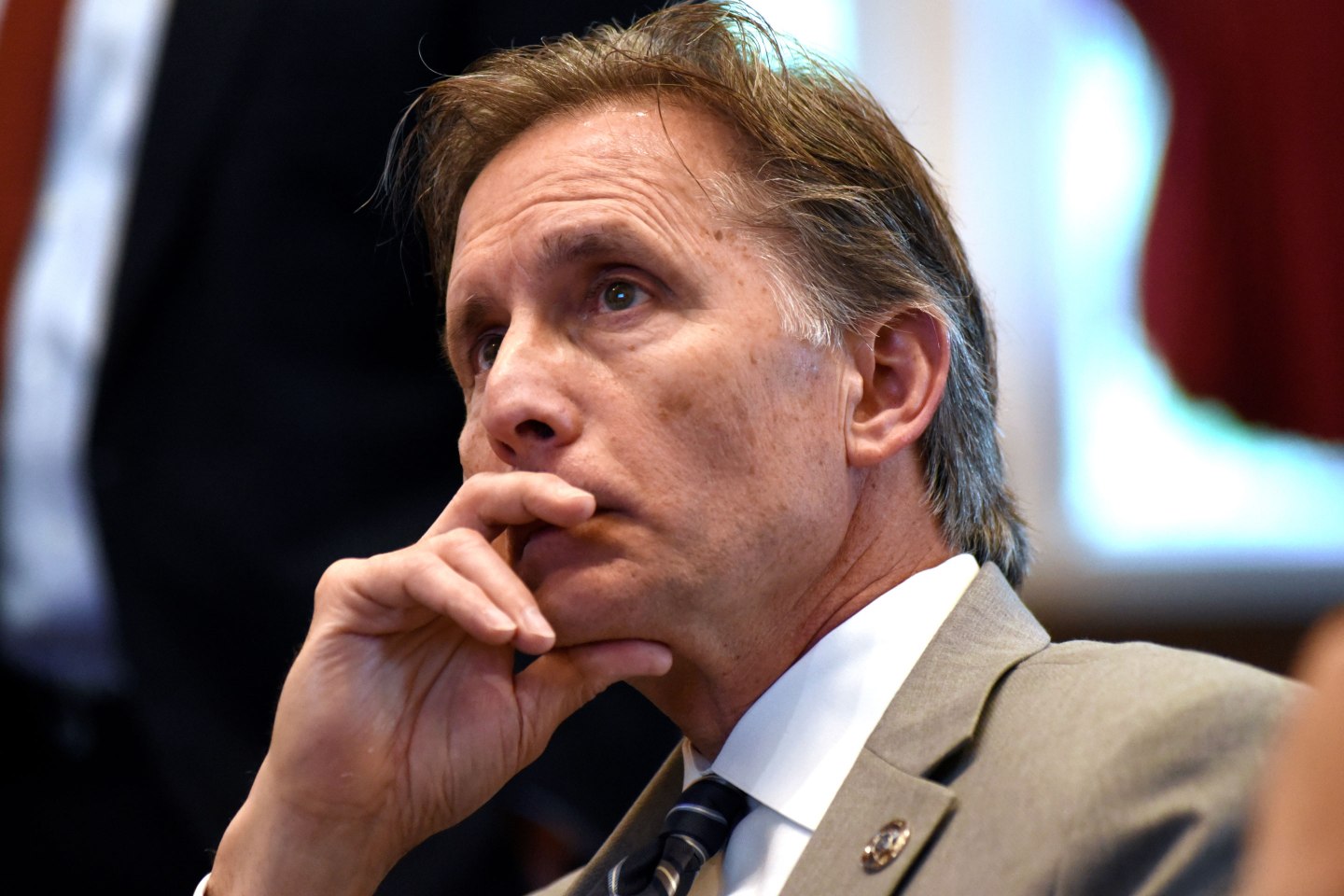 On Day 6 of the opioid trial against pharmaceutical giant Johnson & Johnson—a trial that is expected to last two months—Oklahoma’s Attorney General Mike Hunter decided to give a press conference to recap some of the takeaways from the proceedings so far. Among his points: At the height of the opioid epidemic, J&J’s sales representatives targeted over 140,000 Oklahoma doctors, he said. These reps billed themselves as pain experts but had no medical training. And under the guise of “education,” they “influenced, targeted, hooked, and leveraged doctors into buying their opioids.”

“Is it safe to say that the state is very confident still in their case?” asked one reporter.

There is little doubt that the country is in the throes of an opioid crisis. Less than a year into his presidency, Trump declared the opioid scourge a national emergency. In 2017, there were 47,600 drug overdose deaths nationwide that involved opioids, according to the Centers for Disease Control and Prevention. In Oklahoma specifically, CDC numbers also show drug overdose deaths per 100,000 people is 20.1, under the national average of 21.7, but much higher than Nebraska, which has the fewest at 8.1, and lower than West Virginia’s 57.8 deaths per 100,000. Hunter says, 4,653 Oklahomans died of unintentional overdoses involving prescription opioids from 2007 to 2017.

The Oklahoma trial holds great interest because it is widely seen as a test for the collection of some 1,600 plus lawsuits consolidated in a multidistrict litigation in Ohio. That court process is scheduled to get underway in October. In those proceedings, many of the court documents are redacted or under seal. So Oklahoma provides the public’s first glimpse into what the evidence—and J&J’s defense—looks like. “Everyone is looking at this trial so that they can adjust their strategy going forward,” says Elizabeth Chamblee Burch, of the University of Georgia School of Law and the author of the recently published book, Mass Tort Deals: Backroom Bargaining in Multidistrict Litigation.

J&J’s opioid products at the center of the trial are a tablet called Nucynta (divested since 2015) and Duragesic, a transdermal fentanyl patch. Also part of the litigation: two sister companies that J&J owned until 2016 that produced and processed ingredients from patented Australian poppies for use in its own and other companies’ narcotics. Those companies, such as Purdue Pharma—widely viewed as the star opioid villain—helped fuel the crisis, the state says. Which makes J&J and Purdue “co-conspirators,” according to the state, and J&J a “kingpin.” The unsavory depiction hardly aligns with the family-friendly image that the maker of baby shampoo and Band-Aids portrays.

In March, ahead of the trial, Purdue and the Sackler family that owns the maker of OxyContin came to a settlement of $270 million. On the eve of the trial, Teva, an Israeli generic drug pharmaceutical, settled for $85 million. Which left J&J as the sole defendant. “We acted responsibly in providing FDA-approved pain medications, and we are ready for trial,” the company said on the heels of the Teva settlement.

It’s worth noting that J&J is also currently in the headlines for cases linking its talc powder to asbestos-related cancer. Last week, a New York jury awarded $300 million in punitive damages to one claimant, which the company plans to appeal.

Considering the court of public opinion on opioids, why not just settle like the others instead of fighting a campaign that paints J&J as a pariah?

“Part of it is J&J’s mojo for their litigation strategy,” says Burch. She has followed the company’s legal actions in the hip replacement and talc cases. J&J has very little market in the State of Oklahoma, notes Burch. According to J&J: Duragesic and Nucynta made up less than one percent of Oklahoma Medicaid opioid prescriptions between 1996-2017. “They feel like they have a pretty strong case, I suspect. I think they’re wanting to send a message to everyone else, all 1,600 lawsuits in federal court, that this is not going to be an easy case to prove against us. We’re not just going to cave and throw some money your way.”

Oklahoma is not a perfect litmus test for future litigation. For one, Oklahoma is a bench trial, which means a judge will be deciding the merits of the case, not a jury. Lars Noah, a law professor at the University of Florida believes this makes the trial more industry-friendly and gives an edge to J&J. “Jurors are famously bad at paying attention to their instructions,” he says. “And they’re famously generous at awarding astronomical damages.”

If the bench trial goes well for J&J, plaintiff lawyers in other cases might dismiss the Oklahoma results and bank on verdicts heading in a different direction in front of a jury, Noah points out. If J&J fares poorly, he says, “they can proclaim victory and say, ‘Just wait until juries get ahold of these and we’re really going to trounce you.’”

The other unique aspect of this trial is that Oklahoma’s only claim remaining against the pharmaceuticals giant is a public nuisance claim. As the trial neared, Hunter scaled back, dropping claims involving fraud and deceit, which would require showing intent. But classic public nuisance cases involve interfering with a right common to the public like air, water, or roads. In a legal sense, if a company dumps chemicals into a river, that pollution would be a traditional application of public nuisance law, and the company would have to clean up the mess. If Oklahoma prevails in its claim, it can pursue abatement, which could mean billions of dollars for the state.

“Public nuisance claims are somewhat adventuresome,” notes Alexandra Lahav of the University of Connecticut School of Law. “It’s not an area that has been well litigated. So whenever you have a public nuisance claim, you are always striking new ground. That’s more opportunity, but it also means it’s hard to predict for us looking from the outside what this judge is going to do.”

A judge in North Dakota recently dismissed a lawsuit against Purdue, rejecting similar arguments. But each state has its own iteration of public nuisance law. And while some point to public nuisance theory as prompting the landmark tobacco industry settlement, very little was actually litigated, which makes it hard to point to clear precedent. Plus there were other claims creating pressure for the tobacco industry to settle. In the gun industry legal quests, public nuisance arguments did not succeed. Lead paint results were mixed.

As for opioid manufacturers being a public nuisance, there is a long causal chain that involves heavily regulated, FDA-approved drugs with therapeutic purposes that are prescribed by doctors. Which makes it harder to assign blame. “You’ve got to make connections from the behavior of the named defendants to some endpoint,” says Noah. “You have to explain how that endpoint qualifies as a substantial interference with a right common to the public.”

So where does that leave J&J? As the trial headed into its second day, investors got nervous and lopped $20 billion off the market cap on jitters around opioid litigation. In a research note, Credit Suisse analyst Vamil Divan expressed surprise considering the limited sales J&J provides to the opioid market. Damages and penalties J&J could face should be less than the $270 billion Purdue settlement, according to the note. Something which J&J, with $81 billion in revenue, should be able to shoulder if the judge finds them at fault.

Another thing to consider with big verdict risk is that a lot of those verdicts can be struck down. In the immediate aftermath, markets can panic. “But in the end, this is not what is being paid out,” says Lahav. “There is very little that is 100 percent sure in law. That is 100 percent sure.”