How San Francisco’s Outside Lands Music Festival Became Just as Popular for Food, Wine, and Beer 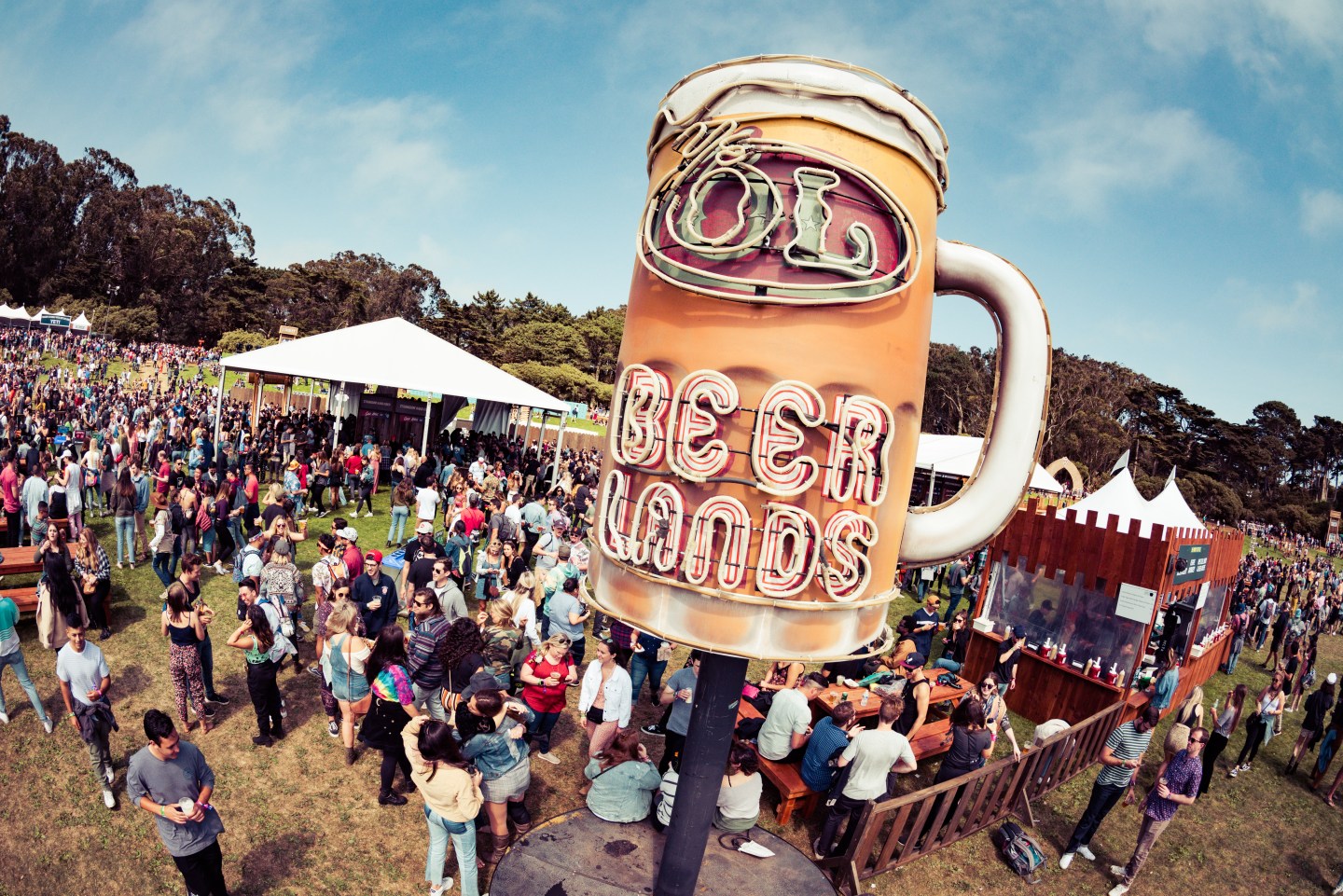 Approximately 200,000 people are expected to descend on San Francisco’s Golden Gate Park this weekend for Outside Lands, a 3-day music festival featuring performance by acts such as Paul Simon, Childish Gambino, The Lumineers, and Blink-182. While music is obviously the draw for many fans to come to the festival, Outside Lands also has another big pull for attendees: the food.

Unlike many music festivals where the food and drink options are primarily overpriced domestic lagers and fried food, Outside Lands’s food options include snacks and meals from some of the Bay Area’s best restaurants.

“We like to phrase it ‘Taste of the Bay Area’ because we really bring restaurants from around the local area to showcase their incredible culinary creations,” says Tanya Kollar, who curates the food offerings for the festival. That means that tourists visiting the city can sample selections from some of the area’s best restaurants, even though they’re only traveling to Golden Gate Park each day. Local restaurants apply to be part of the festival each year. Some restaurants are also approached by the festival for potential inclusion.

“I help them figure out all of their logistics, and overall how to translate a restaurant environment into a festival environment,” says Keller, who helps restaurants that have never sold food outside their doors to plan for a kitchen in the middle of packed music festival.

An entire tent dedicated to wine at the Outside Lands Music Festival.
Tom Tomkinson

Not Your Average Festival Fare

This year’s festival will feature 85 different Bay Area restaurants. Highlights include everything from artisanal cheese plates from Napa’s Oxbow Market to porcini doughnuts with raclette cheese from San Francisco’s Rich Table. The Alice Collective will be serving crab nachos and fried gulf shrimp, and Woodhouse Fish Co. will have lobster rolls, raw and barbecued oysters, and clam chowder bread bolls.

There will also be chocolate and wine pairings beside the Wine Lands tent from Guittard Chocolate Company. Peter Eastlake has curated the festival’s wine list since it first launched a dozen years ago.

“When I looked around 12 years ago at any sort of wine offering of wine experience at large-scale events, there was really nothing,” says Eastlake. “It’s pretty cool we’re a pioneer of the ‘gourmetification’ of the festival.”

One of the gourmet food offerings served at Outside Lands.
Emily Price

Wine Lands started with a small collection of local wineries, but has grown into a massive wine tent—called “Wine Lands”—as well as a mini-golf course that offers wine pairings at each hole called “The Back Wine.”

“It all started when we were trying to figure out how to differentiate this festival from other festivals,” says Kerry Black, co-founder of Superfly, co-producer of Outside Lands. He also curates Gastro Magic and Cocktail Magic, which are stage shows at the festival highlighting the food and drink space. “We decided to really lean into showcasing what was great about San Francisco and the Bay Area, and so we decided back in those early years to really focus on the food and the wine.”

This year’s lineup includes wine offerings from a total of 48 wineries, the majority of which are from California. Eastlake says that he looks to offer a wide range of wines for everyone from new wine drinkers to connoisseurs. This year’s wine list will offer everything from an inexpensive bottle of tropical moscato and canned wine options to wines like Napa’s Ashes & Diamonds 2015 Cabernet Franc, which will be served in the VIP tent and retails for $75 per bottle.

Inside the Wine Lands tent at Outside Lands.
Tom Tomkinson

Wines are sold in three different sizes: a 1-ounce taste, a standard 4-ounce pour, and an 8-ounce “double,” which is essentially a third of a bottle of wine. All three pours are done in the same reusable plastic glass, just up to a specific wine mark on that glass. Pricing varies not only by the size of the pour but also the wine itself.

And when you start talking about single-vineyard releases, you can also end up getting some pretty pricey pours. The tent came under fire a bit last year for an Ashes and Diamonds wine that was priced at $80 for an 8-ounce pour. While one local news outlet wrote stories suggesting the price was outrageous, Eastlake says that the booth pouring it stayed busy throughout the weekend—there was a market for those high-dollar pours.

Eastlake says he’ll never forget the year that the festival decided to sell Napa’s famous Caymus Cabernet. He wasn’t sure how the expensive wine would go over with the festival crowd, so he ordered five cases and thought, “We’ll see what happens.”

“We killed it all on the first day,” Eastlake says. “People were just lining up for four glasses for $100. There was a line.”

Beer Lands serves beer from only California breweries, and the selection is curated by the owner of Magnolia Brewing on Haight Street.
Virginia Cortland

While the festival started with Wine Lands, it now includes a Beer Lands tent as well. Added four years after the launch of the festival, it’s the brainchild of Dave McClean, founder of San Francisco’s Magnolia Brewing and co-founder of Admiral Maltings.

“I can remember talking to various members of the Outside Lands team about how to get a good craft beer presence at Outside Lands,” says McClean. Beer Lands started out a relatively small tent by the festival’s comedy stage, but at some point, McClean says it was deemed such a success that it moved to a prominent location on the main field. This year’s festival will feature 30 California breweries in total, most of which will be serving multiple beers.

As for how he selects the beer, McClean says “it’s a very flexible process.”

“I have my goals as curator to shape the overall look and feel of what’s being served,” he says. “I have to work with the fact that we’re choosing to work with a lot of really small local breweries, and so they don’t always have everything available that I might be excited about.”

McClean says that for many of the breweries, it will take an entire batch of a beer to be able to supply the 3-day festival, which may or may not be something a potential brewery can handle. This year, he worked on several collaboration beers that will be exclusive to the festival. That includes a Hazy IPA and a Tropical Pale Ale with San Francisco’s Local Brewing Company, and an IPA with Sonoma Springs Brewing.

There are also a number of new breweries—including East Brother from Richmond, Calif. and Woods Brewing from San Francisco—that will be pouring at the festival for the first time, giving attendees the option to try out a new spot.

The new beers not only reflect changes in the food and drink offerings at Outside Lands, but also what’s new and hot in the Bay Area, bringing a little bit of the entire state of California to Golden Gate Park for the weekend.

“One of my favorite hobbies is going around and eating at new restaurants that I haven’t tried yet,” Keller says. “For me, it’s kind of a bigger version of that.”

Outside Lands runs from August 9-11 in San Francisco’s Golden Gate Park. One to 3-day tickets are still available on the festival’s website.

—Vietnamese egg coffee is taking North America by storm–but what is it?

—Listen to our new audio briefing, Fortune 500 DailyFollow Fortune on Flipboard to stay up-to-date on the latest news and analysis