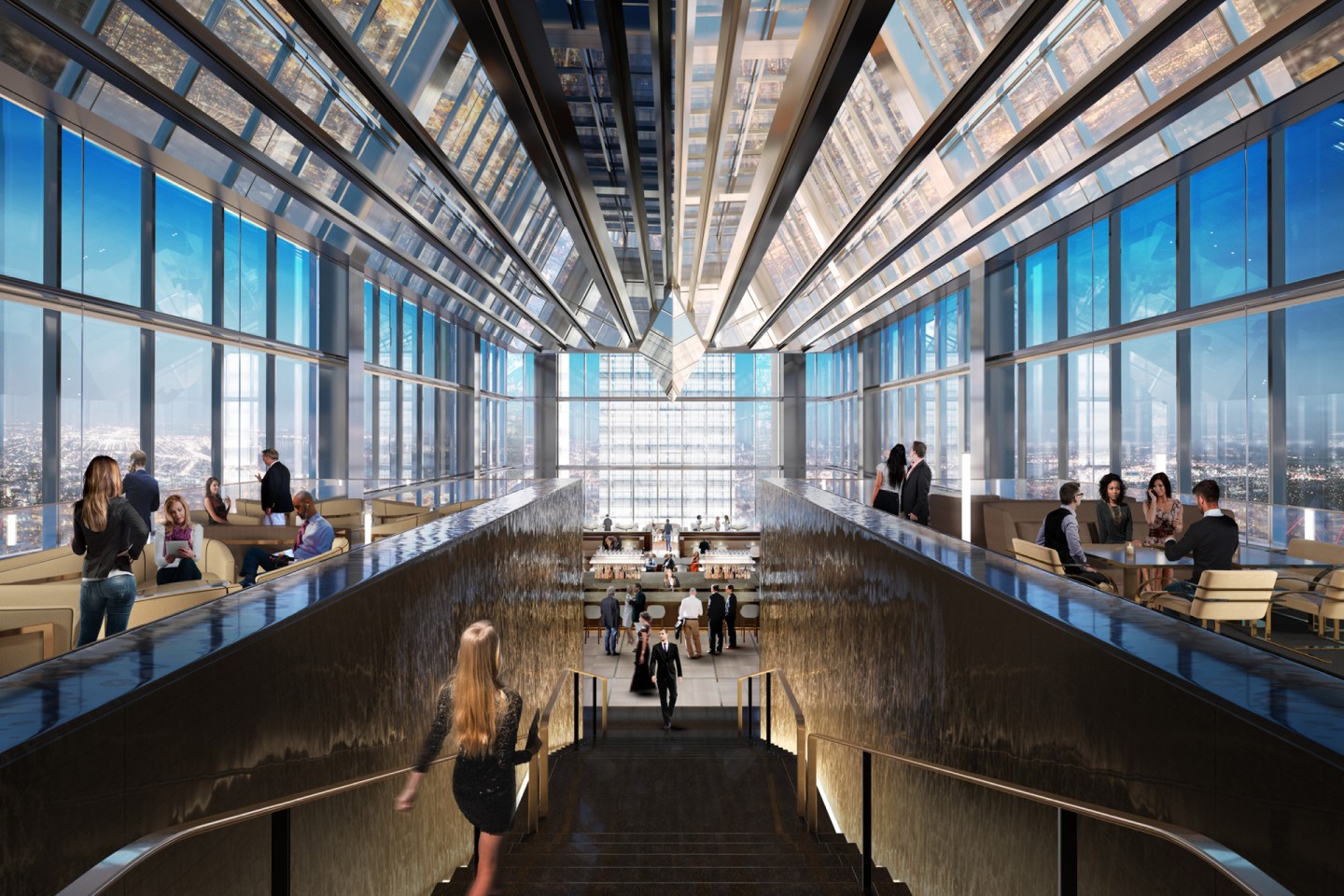 The Jean-Georges Restaurant and Lounge on the top floor of the new Four Seasons Philadelphia, opening in August.
Courtesy of Jean-Georges

Philadelphia has experienced a culinary revival over the past two decades, making the transition from a place best known for its cheesesteaks and red-sauce Italian joints to a gastronomic destination boasting BYOBs with hyper-local menus, a thriving vegan scene, and the most outstanding restaurant in the country, according to the James Beard Foundation.

Adding to this momentum are two of the city’s most highly anticipated and ambitious restaurant openings, both set to debut the same day. On Aug. 12, the new Four Seasons Philadelphia—located inside the Comcast Technology Center—officially opens its doors. On the ground floor is Vernick Fish from James Beard Award–winning chef Greg Vernick, and on the top floor is the latest from celebrated chef and restaurateur Jean-Georges Vongerichten.

The space is the first restaurant project for famed architect Norman Foster.
Courtesy of Jean-Georges

Life at the Top

Guests will take a glass-walled elevator to get to Jean-Georges Philadelphia; the exhilarating, 48-second experience is a visual amuse-bouche before the main course. The 60th-floor sky lobby cocktail bar, JG Skyhigh, and the 59th-floor main dining room both occupy one sweeping space surrounded by 40-foot-high, floor-to-ceiling windows that, from this perch atop Philly’s tallest building, showcase One Liberty Place, historic City Hall, and the rest of the City of Brotherly Love. Designed by London-based architect Norman Foster (who also designed the rest of the Comcast Technology Center), the restaurant also features two walls of waterfalls and an angular, mirrored ceiling that catches the light and reflects the street 60 stories below. “Wherever you sit, you can see people walking. You’re part of the city a little bit,” says Vongerichten. “At night when the city is all lit up, it’s magic.”

Vongerichten’s first foray into Philadelphia came to be after his friend and Comcast CEO Brian Roberts approached him about the project. While the New York City–based chef was drawn by Philadelphia’s vibrant food scene, he’s also a self-described architecture buff and couldn’t pass up the opportunity to work with a legend. Norman Foster has designed structures around the world, including Apple’s corporate headquarters in Cupertino, Calif., but this is the architect’s first restaurant project. With an over-the-top space, the decor is minimalist, with soft curves and a neutral color palette.

The kitchen will be helmed by chef de cuisine Nicholas Ugliarolo, who has worked with Vongerichten for six years, including at New York City’s vegetable-forward abcV. The menu will feature classic Jean-Georges bites like Egg Caviar, as well as dishes tailored for the Philly market, according to the chefs, with à la carte options like corn nut–crusted salmon, hamachi sashimi with spiced strawberry water, and summery heirloom tomatoes in a bright, acidic tomato broth.

While on the top of 60 floors, Chef Vongerichten says the design should still catch the light and vibrancy from the street level.
Courtesy of Jean-Georges

Getting In on the Ground Floor

Fifty-nine floors below, another Vongerichten alum heads his own kitchen. Greg Vernick was the sous chef at Nougatine and Spice Market and a corporate chef trainer for the global brand before moving to Philadelphia to open his namesake restaurant in 2012. Seven years later, the chef is unveiling his follow-up, Vernick Fish. And while the city has waited patiently for more from Vernick, the timing makes sense for a disciplined chef known for meticulous ingredient sourcing and thoughtful preparations.

As its name suggests, the modern brasserie will spotlight seafood, with Vernick drawing inspiration from coastal regions around the world, and, more specifically, from a lifetime of summers spent at the Jersey Shore. “We have a blackened fluke dish on the menu, and every time the fluke hits the griddle, the salty, marshy smell instantly reminds me of Somers Point,” says Vernick. The menu will include wild, lake, and preserved fish, plus some oyster bar classics. But for all of Vernick’s restraint and focus, a fun and looser vibe hits with the dessert offerings of pie and cake by the slice—another nod to Jersey Shore summers.

While these openings are a significant moment for Philadelphia’s food scene at large, it is also a serendipitous reunion for the chefs. “Having Jean-Georges in the building makes me want to do a better job,” Vernick says. “I want to make him proud.”

For his part, it seems like Vongerichten is already there. “It’s amazing what he’s achieved here in Philadelphia,” Vongerichten says of Vernick. “I’m honored to be his friend and mentor.”

—What you should know about Italy’s new food capital

—Vietnamese egg coffee is taking North America by storm–but what is it?