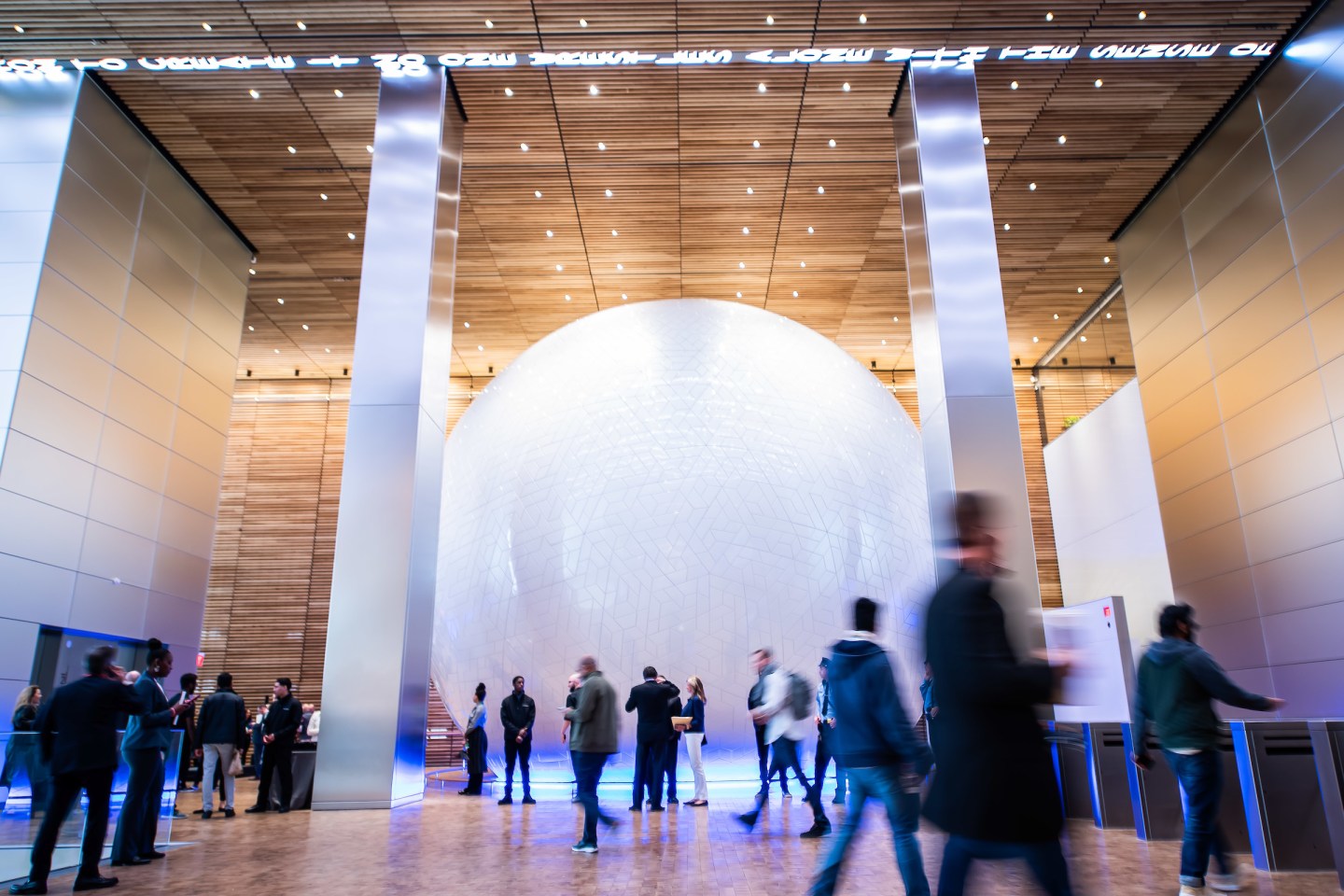 In the lobby of Philadelphia’s glossy new Comcast Technology Center, you will find all the elements you might expect in a $1.5 billion, state-of-the-art skyscraper. Two groves of trees have been planted just inside the entrance, giving way to striking works of art: an 18-foot mirrored-steel sculpture by British artist Conrad Shawcross and, floating across the soaring ceiling, a digital art installation by conceptual artist Jenny Holzer. Up the escalator in the sky lobby, there’s a restaurant by a James Beard Award–winning chef, serving pour-over coffee to go and classic chicken ballotine to stay.

But there’s something else here you probably wouldn’t expect: a three-story, luminescent white orb, which is home to the latest project by one of the world’s most influential filmmakers.

The attraction, named the Universal Sphere, is executive-produced by Steven Spielberg and opened just weeks ago, though it’s been years in the making. Telecommunications giant Comcast, which launched in 1963 and is headquartered in Philadelphia, set out to expand its footprint in the city.

“The first 50 years for our company were about finance and entrepreneurship,” says Comcast CEO Brian Roberts. “If we’re going to thrive for the next 50 years, it’s going to be about innovation, media, and technology.”

With that in mind, the media conglomerate hired Foster + Partners in London, helmed by famed architect Norman Foster, to design the new Comcast Technology Center. When it came time to map out the expansive lobby, concepts ranged from a Comcast store to more seating for restaurant Vernick Coffee Bar. But during construction there was still no definitive plan for the space. An architect assigned to the project shared a new idea he had come across from London-based company Immersive: a visionary new mode of storytelling, using a sphere as a form of virtual reality without the headset or glasses. Roberts immediately saw the possibilities, and he reached out to someone with filmmaking experience for advice on how to proceed. “I asked Steven, ‘Who’s someone who could take this new sphere and help us make a film?’” recalls Roberts. “When he offered to partner with us himself, we were blown away. What an amazing privilege to work with Steven Spielberg to explore a new form of moviemaking.”

To experience the Universal Sphere firsthand, you must reserve a complimentary ticket online. The 34-foot orb sits just feet from the turnstiles streaming with Comcast employees headed to their offices above. When it’s time to enter, hydraulic doors seamlessly emerge and slide open, like an episode of Star Trek come to life. Inside there are a few rows of seats that move along with the film, surrounded by a 360-degree dome theater. By design, it’s impossible to take in the whole film, called The Power of I, at once. But come back to experience in each subsequent viewing elements you might have missed.

The final product took about two years to create. Comcast brought Spielberg in and rented out the Fels Planetarium at The Franklin Institute Science Museum—the closest thing in Philadelphia (or maybe anywhere) to what the Sphere would become—to kick-start the brainstorming process. It was during the first one of these planning sessions that Spielberg got the idea to make a film about the origin and power of ideas.

Striking the right tone in a seven-minute film can be challenging, but the team—which also included Academy Award–winning film composers Mychael and Jeff Danna, as well as creative professionals at DreamWorks Animation, Universal Parks & Resorts, and Comcast Labs—was up to the task. The end result feels both profound and playful. And in a city well known for its rich history, it’s also a groundbreaking and visually stunning new attraction for Philadelphia.

“We wanted to find a narrative that was everything from visually stunning to truly thought-provoking, that had real emotion and purpose, and ultimately, was just an unexpected experience that’s not a commercial for Comcast NBCUniversal in any way, shape, or form,” Roberts says. “It’s a celebration of all that can be.”

—How this wedding singer earns $1.5 million a year

—Tips and treats for stress-free travel with pets

—How Etsy crafted an e-commerce comeback