How This Wedding Singer Earns $1.5 Million a Year 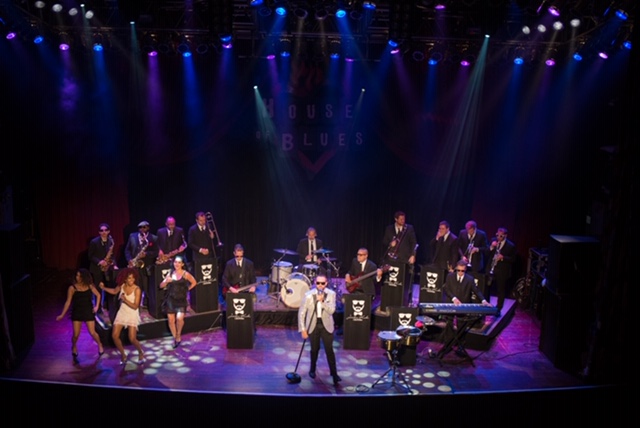 Musician Jordan Kahn and Adam Sandler’s character in The Wedding Singer may both wear bold blazers, but that’s where the similarities stop. Though Sandler’s character might personify wedding bands of the past, today’s groups—like Kahn’s namesake Jordan Kahn Orchestra—could well open for the likes of Bruno Mars or Taylor Swift. With professional-level production, high-tech equipment, and massive amounts of talent, these bands elevate the live-music experience at a wedding—all while making sure Grandma is still boogying on the dance floor.

It’s all big business. The U.S. wedding industry alone brings in $72 billion in revenue annually, and the average wedding costs more than $30,000. Talk about luxury weddings, and that number skyrockets into six and seven figures. Music and entertainment are growing chunks of that budget, as couples view the experience for their guests as higher priority than static decor and pour more cash into line items like music, food, and drink. Nearly 20% hire a band, according to The Knot 2018 Real Weddings Study, and when it comes to a band versus a DJ, couples certainly pay up for live musicians: more than three times as much.

When the Jordan Kahn Orchestra takes the stage, you can easily see why they charge tens of thousands of dollars for their ensemble. An event can command anywhere from 11 to 20 musicians, including Kahn as lead singer and emcee, along with drummers, guitars, strings, brass, backup singers, soloists, and even dancers. Out of sight are wires, gear, and cables. An engineer manages the room by walking around with an iPad to check sound levels in various corners, and the speakers are controlled wirelessly. The orchestra has a repertoire of more than 500 songs, including foreign language ballads that require the group to learn, say, Spanish or Hebrew. Every one of their songs will be recognizable to the audience.

“It used to be that bands weren’t nearly as cohesive or creative,” explains event designer and planner Michelle Rago of Michelle Rago Destinations. “They were more cover bands. They didn’t care about sound, outfit coordination, or their repertoire. Now, every band has a look and feel. They have so much more control over sound and image.”

What sets today’s bands apart, and especially Kahn, is that they have honed the skill set to read a crowd. While mainstream artists like Lady Gaga can follow a set list for a concert, Kahn is constantly trying to understand what the crowd at a wedding wants. It’s an ongoing search for feedback and decision-making as to what to play next. If, for instance, he sees too many guests sitting, he’ll queue up the group to play Etta James’s “At Last.” “I use that song as a tool to fill the dance floor if there are a lot of people in their fifties, sixties, and seventies,” he says. From there, it’s on to Bruno Mars’s “Uptown Funk,” a song that, he notes, has an unique appeal for all ages.

“A lot of musicians and bands make the performances about themselves,” Kahn says. “The terrible bands are the ones who pick songs for themselves or think the quality of their show is how many lights they have. We make our performances about our client and their audience.” The orchestra is so committed that he may play three or four hours without a break. By comparison, your typical cover band will demand a 15-minute break every 45 minutes.

The term “wedding band” is not so appealing to couples, especially younger ones who may lean toward a DJ while their parents ask for a live band. Rago explains that most people say they don’t want a “wedding band,” which is where she steps in to educate them. “These bands are performing at a high level,” she says. “They are seasoned. It’s that live-music experience that everyone loves. The energy is electric.” Sometimes, Rago adds, it’s just about taking them to a showcase to meet the bandleader.

In addition to reading the crowd, Kahn’s band also interacts with guests. Brass players will wander through the room, and he makes sure the choreography of his dancers is easy to emulate. He often sees guests following along in front of the stage as if it’s Dance Dance Revolution. Part of his role as emcee is to create hype, something he can do with the mic by inviting guests to put their hands in the air or sing along.

There is a science to it too. Kahn constantly tracks the BPM of his songs to make sure it’s subtly building over the course of an event. He admits that sometimes they even have to scale it back. “Maybe people don’t have enough alcohol in their system to let loose yet,” he says, “so we’ll drop the tempo.”

His namesake orchestra alone brings in more than $1.5 million a year, but he is also growing an entertainment business that manages several musical groups; it sees revenue over $4 million annually. Not only does he have major music cred—he graduated from Berklee College of Music—but his business partner, Chris Stratten, has worked with Nelly Furtado, and many of his musicians come from the acclaimed jazz program at the University of North Texas College of Music. He owns four other bands, which range in price point to cater to a wide demographic of wedding budgets. It’s another way that wedding music has changed; couples can approach entertainment companies, such as Kahn’s, Vali Entertainment, or Elan Artists, and choose from a variety of offerings to fit their style, taste, and budget.

“Bands are taking on the responsibility of presenting a unique footprint musically,” Rago says. “They are sitting down with the client and talking to them, finding ways to make their event special. Some even rescore music. It’s a very custom experience.”

As for event day, that’s when even the newlyweds are blown away. “People are just floored because the music is so tight,” Rago says. “People expect cheesy, and it’s not.”

It’s all a far cry from Sandler’s iconic ’90s character. “Why would someone choose to be a wedding singer?” Kahn asks. “I do it because I love singing songs that people know, that they can relate to and dance to. I love what I do, and I ensure everyone around me does too.”