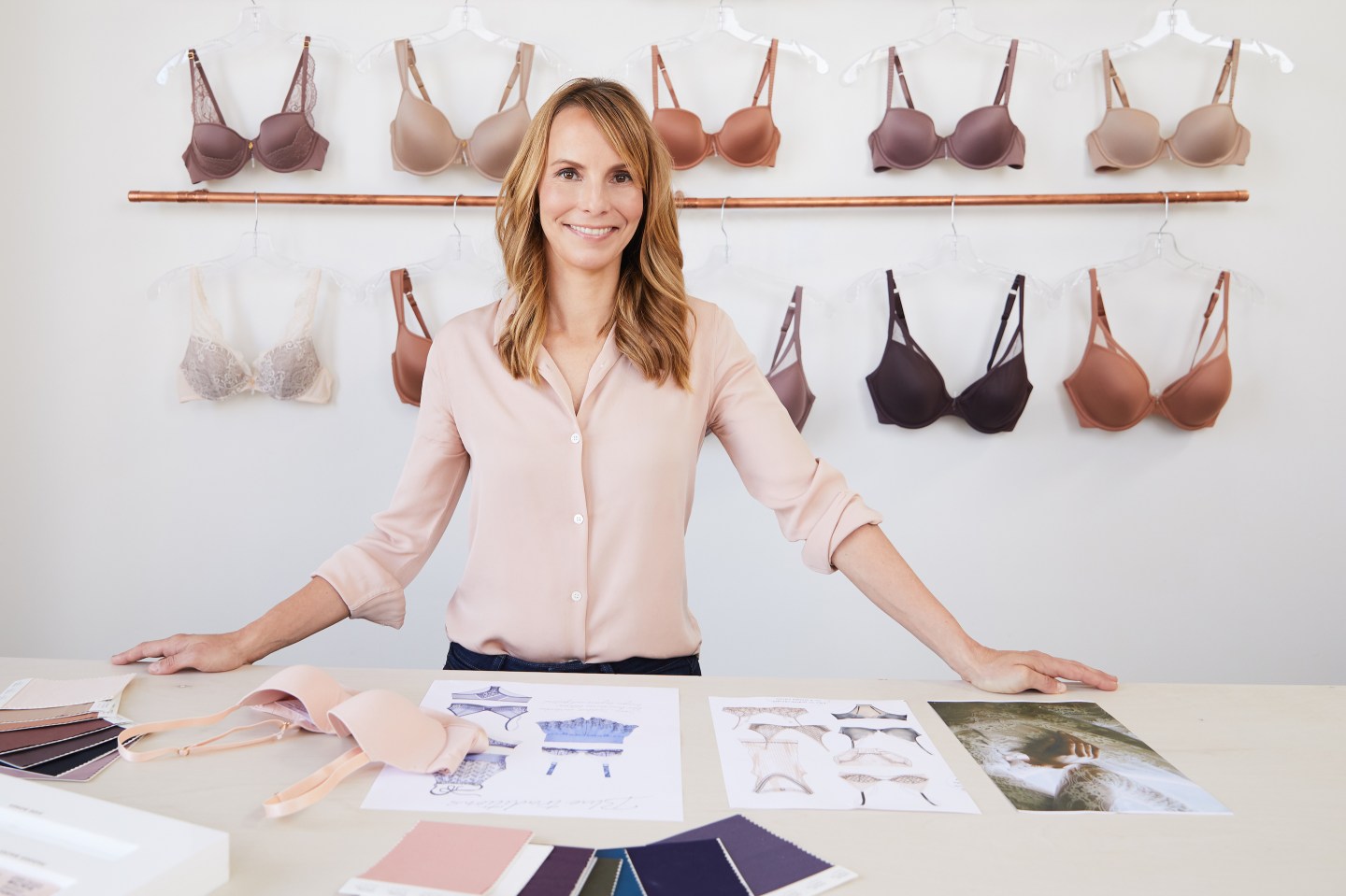 ThirdLove, based in San Francisco, exists at the intersection of fashion and tech, using a data-first and body-inclusivity approach for women, as well as non-binary people, to find the best bra for their bodies. Since founding the company in 2013, Heidi Zak and her co-CEO husband, David Spector, have raised $68.6 million in venture capital, including $55 million in a Series B round in February 2019. The company wouldn’t provide Fortune with sales figures, but published reports peg its growth at 180% over the last four years.

The store—intended to be temporary—allows ThirdLove to fine-tune its business, gleaning customer feedback about bra shopping and fit, as it builds on information from the brand’s online Fit Finder quiz.

While it’s too early to measure ThirdLove’s impact on the bra market—there are other companies pursuing the body-positivity underwear space—it’s certainly disrupting the idea of fitting rooms, which cover 60% of ThirdLove’s 2,000-square-foot concept store.

Brooklyn architecture and design firm Alda Ly developed different kinds of fitting rooms in order to address varying privacy concerns and needs of shoppers. (Among Alda Ly’s retail clients are Rent the Runway and feminist boutique Bulletin, as well as the women’s co-working space The Wing.)

“The typical fitting room experience—in particular for bras—is not the most compelling and comfortable,” Zak tells Fortune. “It can also be awkward depending on your interactions with sales associates and the level of privacy you may or may not want.”

One fitting room has a drawer so customers and salespeople can pass bras back and forth without seeing each other. Another has a double curtain so you can change in privacy and then ask for feedback from fit stylists. The third is a larger fitting room that has enough room for a fit stylist, too.

Like elsewhere in the economy, especially for consumer product companies, the intimate apparel industry is driven and shaped by data.

Before Zak co-founded ThirdLove she worked for fashion retailer Aeropostale. From her experience, she thought reams of consumer data weren’t being leveraged in day-to-day decision making. Zak also had a Google marketing stint. At ThirdLove, she manages a 20-person data team.

The company is perhaps best known for its Fit Finder quiz, a data nerve center. Zak tells Fortune that 14 million women have taken the quiz to date, and the machine-learning algorithm that powers it gets smarter with every new submission.

“We’ve collected over a billion data points as it relates to not just the Fit Finder, but also browsing data, customer journeys, interactions with fit stylists, and many more aspects of the business,” Zak said. “So we really try to use the data to be smarter in everything we do.” Data analysis can influence something as seemingly mundane as ThirdLove’s messaging in emails, or larger concerns as product development or its concept store.

Across all coverage, ThirdLove credits itself with inventing the “half-size” cup for a more custom bra fit. As a result, there are 78 sizes available, from  30 inches to 48 inches and cups AA to I. Colors also match several skin tones.

The concept store will stock seven types of bras (T-Shirt, Perfect Coverage, Classic Plunge, Strapless, Wireless, Lace Balconette, and Lace Plunge) in all the retailer’s bra sizes. Although every bra style will be available to try on in every size, only certain styles—like the strapless bra, which is usually purchased for time-sensitive, special occasions—will be available for in-store purchase; everything else can be shipped in two days.

It hasn’t been decided how long the concept store will exist after its Wednesday opening. Going forward, Zak said there are no plans for permanent bricks-and-mortar stores.

ThirdLove’s attention to the spectrum of bra-wearing bodies is part of the cutting edge in lingerie, which in its own way reflects a growing cultural awareness of diversity in its multitude.

“The lingerie industry has changed drastically in the past few years as a function of how the culture’s view of womanhood has changed,” said Lauren Chan, the founder and CEO of Henning, a plus-size womenswear brand launching this fall.

As a former plus model and Glamour fashion editor, she covered the plus fashion beat for the magazine from 2015-2018. She noted imagery around lingerie has become less perfect and more relatable, and until recently, plus-size women and women of color could only find what they needed among brands geared toward older women, sold at department, off-price, and speciality stores. “It’s no surprise that women have been leading the charge on both the shift in the zeitgeist and this market,” Chan said.

Cora Harrington, founder and editor-in-chief of The Lingerie Addict, an influential lingerie blog, says she buys most of her bras online.

“It is not possible for me to buy a nude bra in my skin tone from a brick-and-mortar store,” she said. “Most shops simply don’t carry it.” When she looks for brands doing well in terms of being “progressive,” she looks for age diversity, racial and ethnic diversity, and an effort to use gender-neutral language.

“Not all customers are cis[gender], heterosexual, or women,” she said. “I’m also looking for continuity. A one-off, special campaign is far less impressive to me than, say,  consistently using trans models, models of color, and plus-size models in your marketing,” she said.

Megan Grassell, the founder and CEO of direct-to-consumer youth underwear company Yellowberry, thinks social media has been a game-changer for the lingerie industry.

Thanks to customer feedback online, she said, “We’re very aware of what people want to buy and what they expect from brands, which is not just about a product anymore. The way a brand makes you feel is why people identify so deeply with different companies.”

Grassell solicits feedback from girls and their mothers on product development and branding, because she wants them to feel represented. “Ten years ago, you bought what was sold to you, you didn’t really have an opportunity to give feedback in a meaningful way and I think people have that today, and it’s made a big impact,” she said.

As Grassell noted, brands listening to their customers have the strongest chance of staying in the game. “The lingerie brands that have disrupted the industry in a meaningful way are not the brands getting the most press for being disruptive,” said Harrington. “The industry determines if you’re disruptive by altering the way they do things after you.”

Harrington said Nubian Skin is a good example of a truly disruptive brand, citing their product color range. “While they were not the first brand to offer a range of deeper-toned nudes, they did have the biggest impact. After their debut, suddenly dozens of deeper-toned nudes appeared on the market and stayed in the market. This was a permanent change instigated by a single brand. “

Zak says when she launched ThirdLove in 2013, the phrase “direct-to-consumer” didn’t exist. “Ten years ago, you had department stores, specialty stores like Victoria’s Secret, and mass merchant stores,” she said. “Even today that still exists. The vast majority of sales are still coming from a Victoria’s Secret, even though they’ve been on the decline.”

“Ten years ago, hardly anyone was making bras beyond a DD cup or a 36 band, and the companies that were didn’t care much about aesthetics,” Harrington said. “I often say there has never been a better time than right now to become interested in lingerie, and I mean that. Our options and our ability to access those options is better than at any point before.”

—Walmart stores are its antidote to Amazon

—Why Nordstrom’s Anniversary Sale is an ‘Important Test’